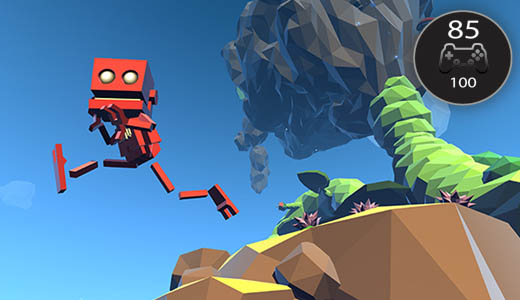 Grow Home is one of those rare games which manages, through a clever blend of game play and visual style, to be immediately accessible and fundamentally charming, even minutes after starting your first game.

Grow Home’s influences are clearly visible from the get go, with a very Pixar-esque lead character on a heart warming adventure to bring back nature to his world.

You are in control of B.U.D, (Botanical Utility Droid), and your mission is to grow the enormous “Star Plant” to reach floating islands in the sky, collecting the seeds which will allow you to re-oxygenate the world and presumably herald the return of human life. This is done by riding the shoots of this massive plant as they explosively grow outward, B.U.D clinging on and guiding them to his destination. 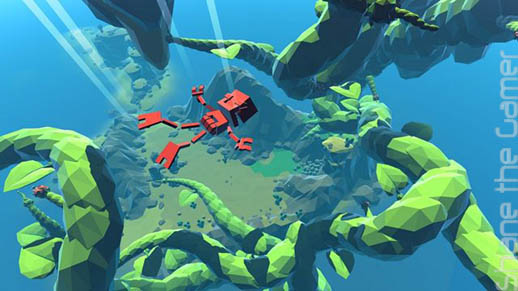 Graphically the game is gorgeous, its Cel-shaded design palette combined with minimalistic polygons evoke nostalgia for earlier eras of gaming while at the same time it remains polished enough to not feel dated.

The lighting is a standout. It brings the richness of the colours to life.

The graphical style matches perfectly to the child like tone of the game, even your guide through the world is another machine named “M.O.M”. B.U.D emotes through charming blips and bloops, (think some kind of wonderful blend of Wall-e and R2D2) and also through his very motion.

The movement of B.U.D is procedural as opposed to a single fluid animation, the first time you attempt to move will almost certainly result in a hilarious flailing of limbs, like a toned down version of Octodad. 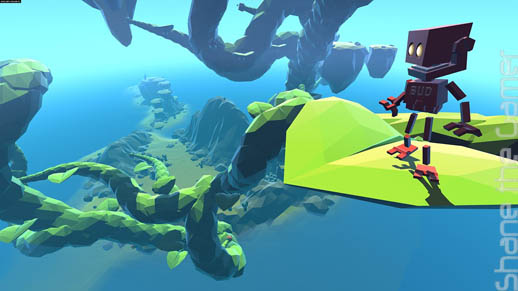 However the difference with this game is that instead of deliberately making moving around nearly impossible, they simply make the motion of B.U.D more meaningful as you must learn to control his quirks to progress.

This is a game where you literally must learn to walk before you can run. The mechanic of climbing is particularly interesting and is handled by individually moving each of B.U.Ds arms, something which sounds incredibly simple but after years of assisted climbing, genuinely takes time to adjust to.

Carefully moving left, right, left, right while dangling from the side of a vine at 2000ft is a great experience as you genuinely may fall, a feeling of jeopardy many platforming games have lost. 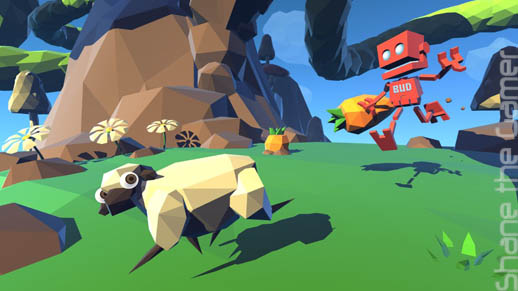 While many may start the game with perhaps not much more than a vague sense of interest they will find the bright colours and shapes endearing.

As you progress through the story and your star plant begins to become truly towering, the game showcases an amazing sense of verticality. There is a childish joy evoked in leaping from the branches off your star plant thousands of feet in the air, only to glide safely between islands with your leaf parachute.

Unlockable items give you various ways to navigate the world, giving you incentives to gather all the collectables you can. The collectables in this case take the form of power crystals, which upgrade you with bonus movement options, such a as a jetpack. Yes. There is a jetpack. (Spoiler Alert: It’s amazing). 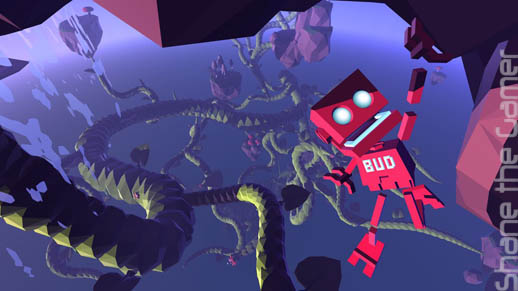 The game world of Grow Home may not be as huge as the larger open world of high budget projects such as Dragon Age Inquisition, but what I love about this game is what it does with the space that it has.

The sense of scale in all directions is impressive, particularly since you get to experience the game world literally growing around you as you ride the star plant ever higher. Islands floating in the distance challenge you to reach them through inventive leaping and gliding, and even when you make a miscalculation and fall, the game is forgiving enough to avoid frustration.

There are many hidden crystals just out of reach to pull you away from the main story (which is itself perhaps a little on the brief side).  While it has secondary things to achieve, the game is never cluttered with side quests or a huge number of meaningless collectable items, (ala Assassins Creed) and this is a refreshing change. 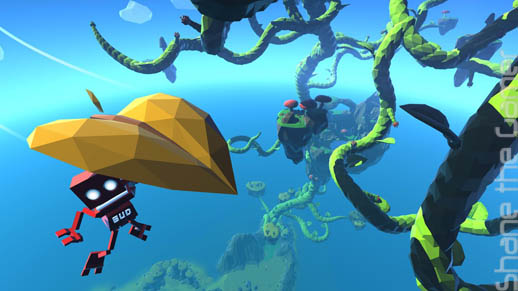 So much side content in video games is forced down your throat to the point where the joy of discovery is lost, and this is what Grow Home manages to recapture.

While there may not be a huge amount to do in this world, every single thing you can do is enjoyable.   Grow Home is a small but perfectly formed gem of a game, which may not have the greatest replayability in the world but is worth every cent of its asking price and more.