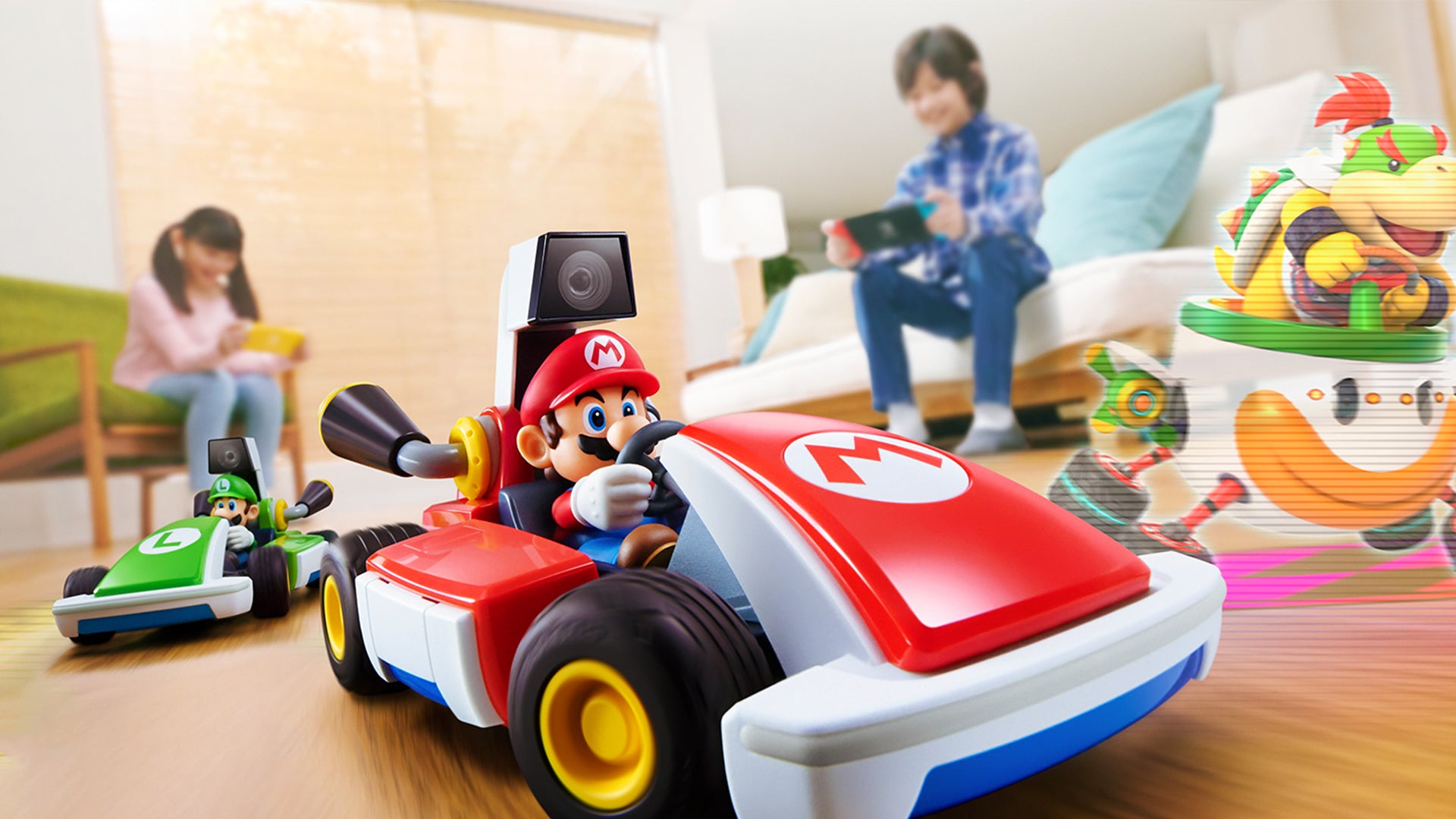 Mario Kart Live: Home Circuit includes everything Nintendo Switch owners need to get ready, set up and go: one kart – with either Mario or Luigi in the driving seat, depending on the set you choose – plus four gates, two arrow markers that can be used to enhance your tracks, and a USB charging cable for the kart. The software comes in the form of a free download from Nintendo eShop, which, once downloaded, syncs up with your physical kart hardware.

Set up for the game involves placing the four gates around your living space, then driving through each of them in turn to create a track layout. Creativity is key and many different shapes of track can be designed, from simple and classic to more complex layouts, full of twists and turns. It’s recommended to have an area of at least 3.5m x 3m to play in, but beyond that, any living space, large or small, can be transformed into a unique Mario Kart experience, with countless course combinations possible even in smaller rooms. Once the track has been set up, it’s time to race!

The main mode of Mario Kart Live: Home Circuit is Grand Prix, where players will face off against the Koopalings across eight Grand Prix featuring 24 different courses in total. In every race, familiar Mario Kart elements in the game affect the physical kart itself, bringing the frenetic fun of Mario Kart into a whole new dimension. Grabbing a mushroom in-game gives the physical kart a speed boost, whereas getting hit by a red shell will stop the kart in its tracks. A range of well-known items from the Mario Kart series are present, including slippery banana skins, ink-spilling Bloopers, and even Bullet Bills that enable the kart to surge around the course at high speed, steering itself. Different environmental themes, such as underwater, volcanic and retro, spice things up further by introducing a variety of in-game hazards and features – all of which affect the kart in real life. Collecting coins in-game will also unlock customisation options, allowing players to spruce up their on-screen look with different costumes and kart types. Similarly to Mario Kart 8 Deluxe, there’s also a steering assist option, to help the kart stay on the track and allow younger or less experienced players to join in on the fun. 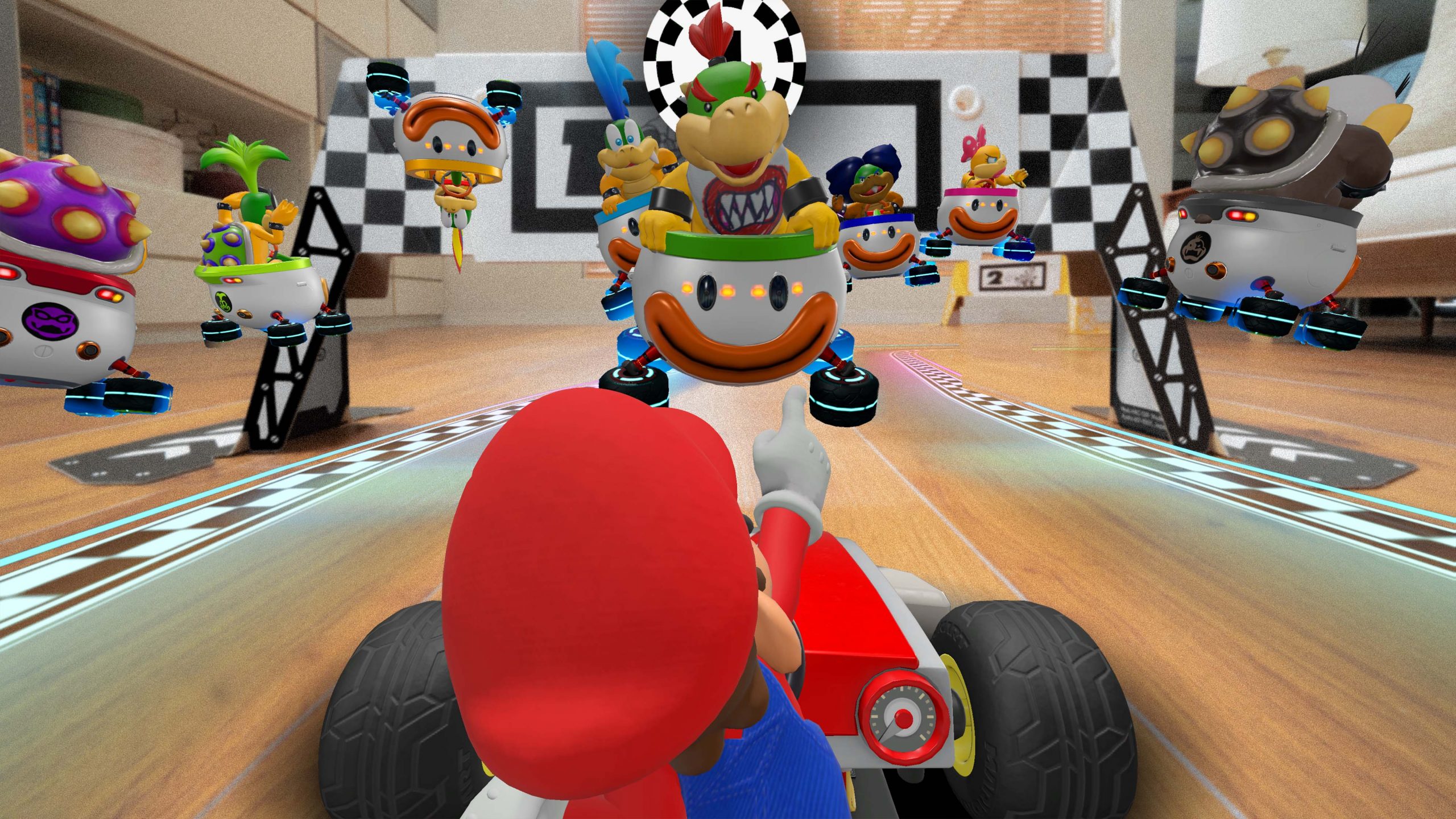 In addition to Grand Prix mode, there are various other ways to play Mario Kart Live: Home Circuit such as Custom Race, this mode gives players even more room for creativity, designing not just the physical layout of the track but also adding hazards, items and more to bring truly unique creations to life and Time Trial where players create a track and then race to set the fastest time possible – competing either against their own personal best, or handing the controller to another player for an exciting Time Trial head-to-head that requires only one Nintendo Switch console and one copy of Mario Kart Live: Home Circuit.

In addition is Mirror Mode for those who fancy an extra challenge, this mode allows all of the Grand Prix tracks to be played in mirror image, with right turns becoming left and the familiar becoming unfamiliar. 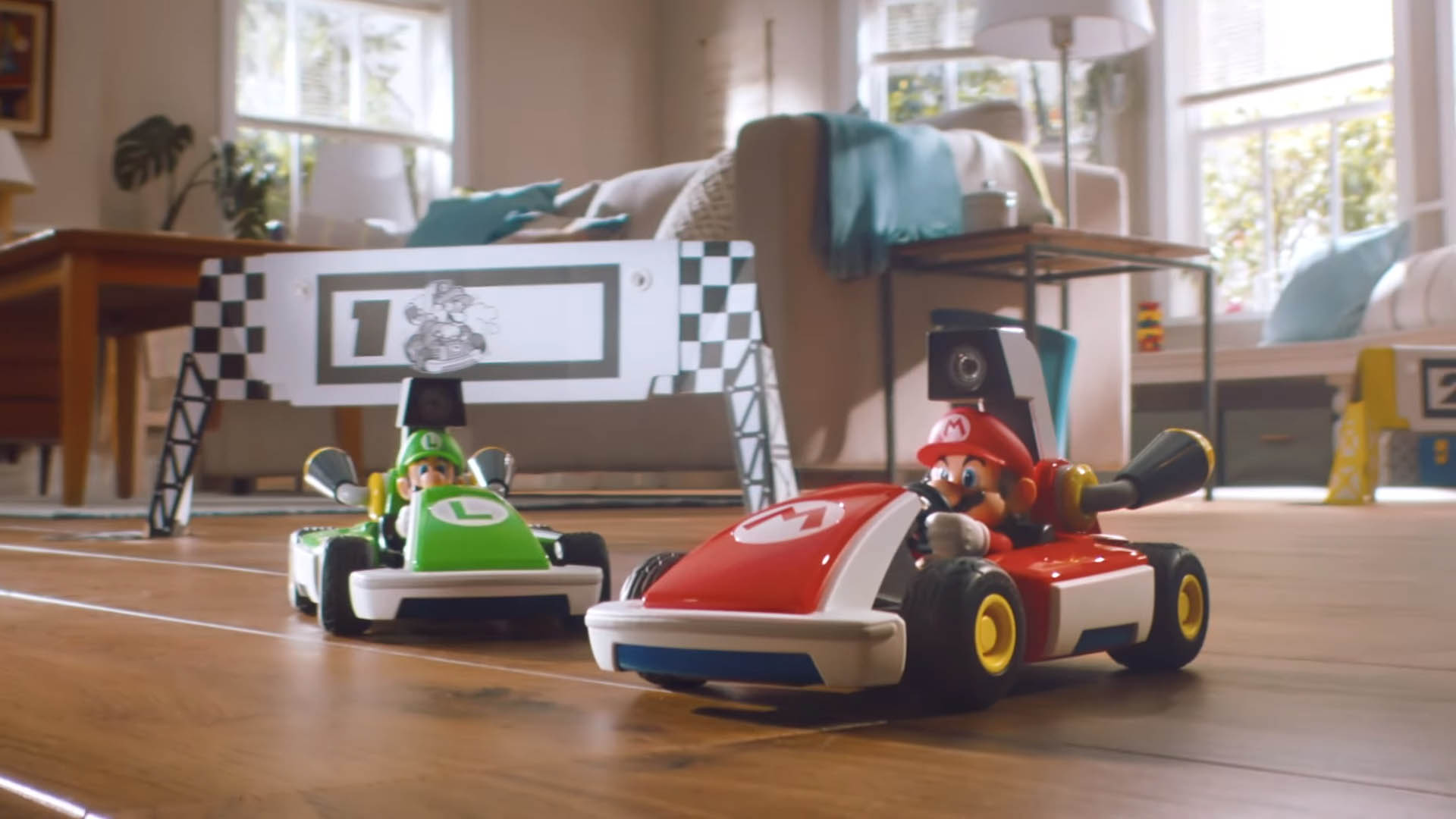 With multiple Nintendo Switch consoles and copies of Mario Kart Live: Home Circuit, up to 4 players can race against each other in either Grand Prix or Custom Race modes. With so many different ways to play, and the ability to utilise furniture, toys and other household objects to create unique home racetracks every time, Mario Kart Live: Home Circuit offers a world of possibilities for imaginative racers of all ages and experience levels.

Created in partnership by Nintendo and Velan Studios, Mario Kart Live: Home Circuit is an all-new Mario Kart experience for Nintendo Switch that brings fast and frenetic Mushroom Kingdom motorsports to life, as players race physical karts around custom racetracks created in their own homes. Mario Kart Live: Home Circuit is available as both a Mario set and a Luigi set, and launches at retail on 16th of October 2020.