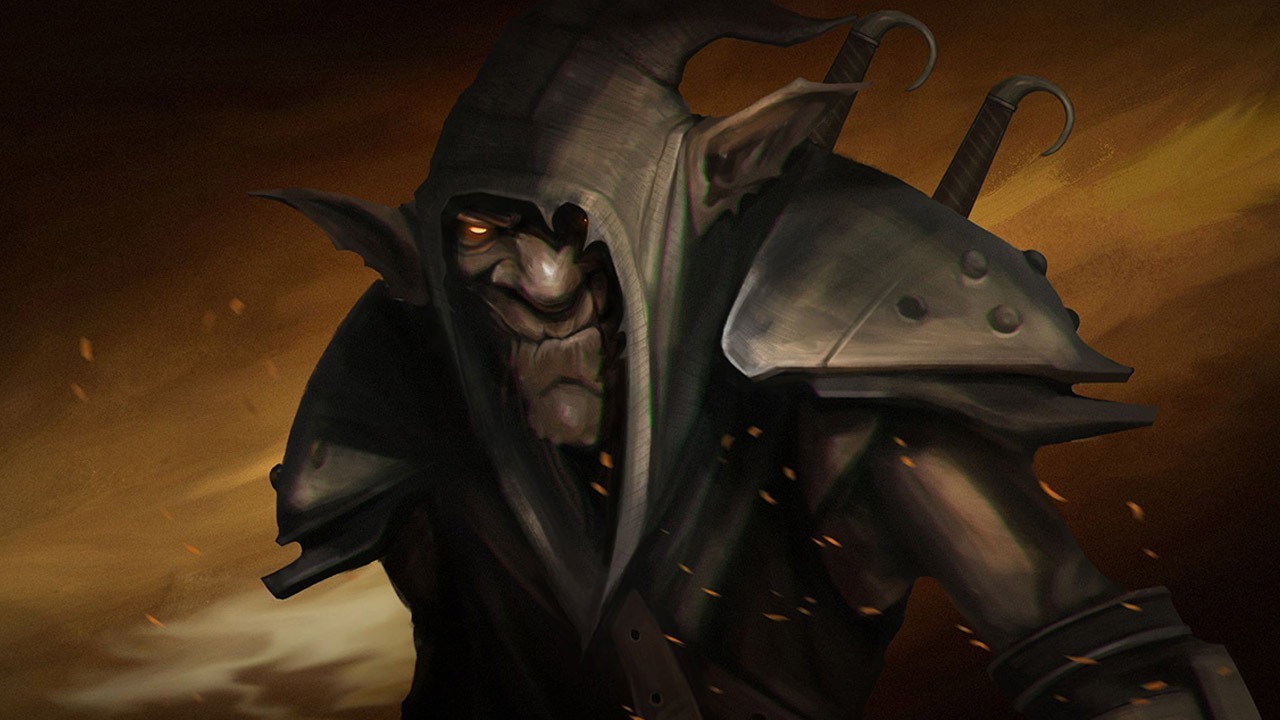 Styx: Shards of Darkness, sequel to Cyanide Studios’ stealth hit Master of Shadows, comes to PlayStation 4, Xbox One and PC in Q1 2017. Shane the Gamer (StG) has been given a few game screens which show off the heavily guarded Port of Korrangar, airships in flight, and the impish nature of our green-skinned thief himself. 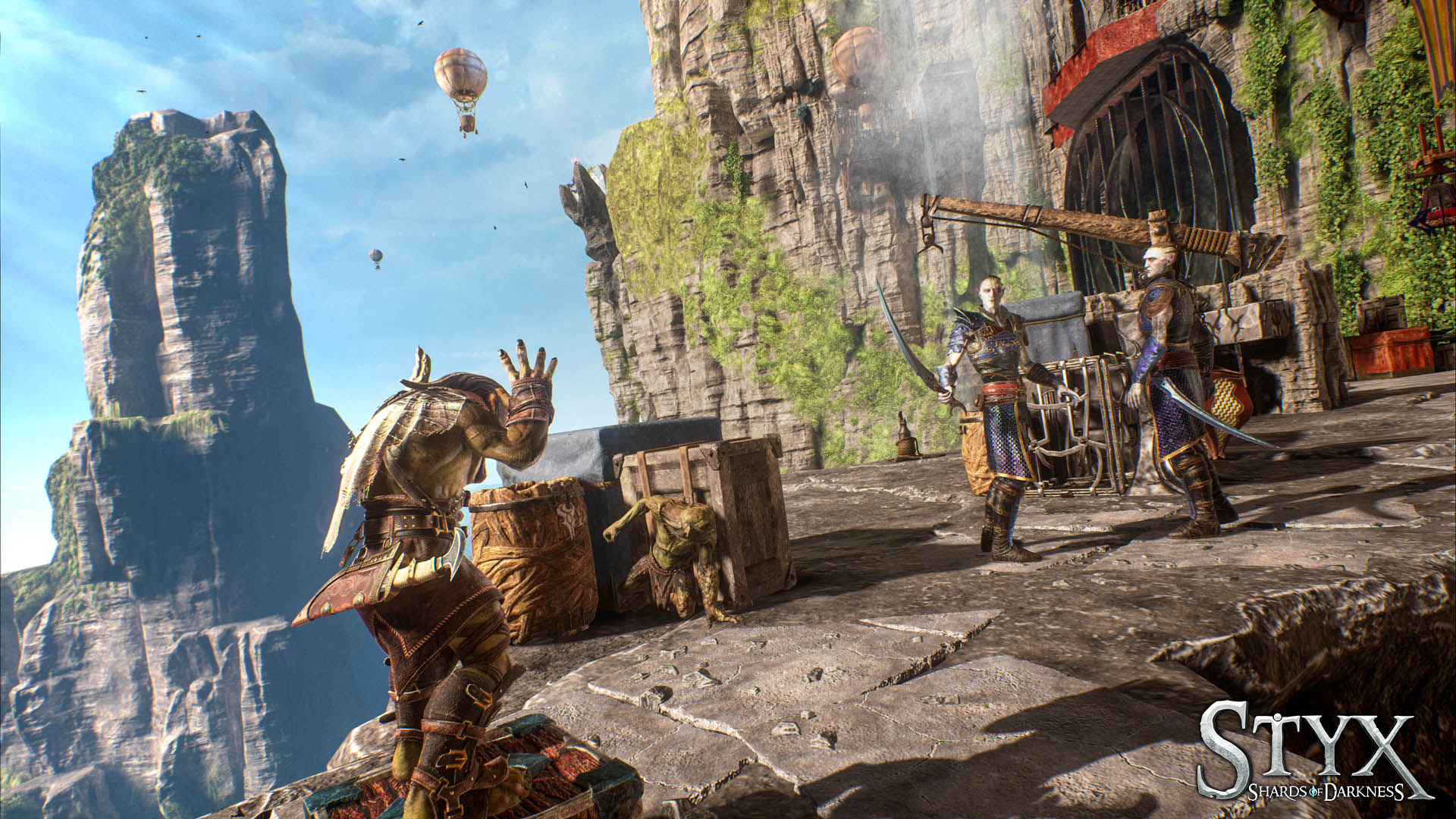 The only thing sharper than Styx’s wit is his knife, and both will be put to the test in his deadly adventure across land, sea and sky. After taking care of business in City of Thieves Thoben, Styx agrees to steal an ambassador’s scepter – in exchange for vast quantities of highly addictive, magical Amber of course! It’s not long before this seemingly straight forward task takes an unexpected turn though, as Styx is thrust into a dangerous world of shady politics and powerful magic.

This time around, Styx has access to a far greater arsenal of tools and abilities to fit with a range of different play styles. Avoid or hunt guards with potent Amber powers, including the ability to instantly teleport into a newly hatched Styx clone. The newly-added crafting system lets you adapt to situations as you progress, allowing you to craft lethal traps and other devices from components stolen on your adventure. 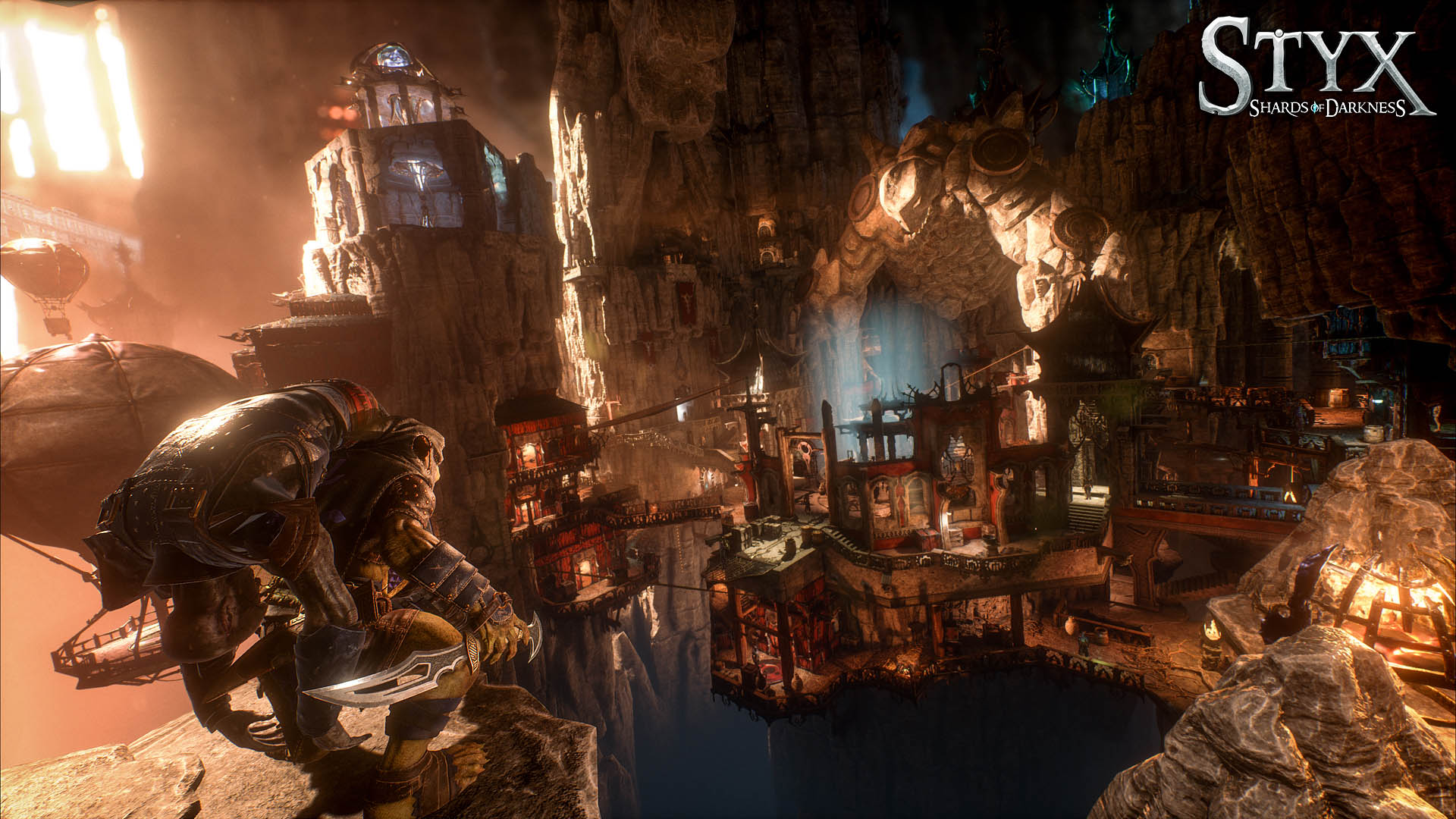 This open-ended approach extends beyond Styx himself. The game once again features highly vertical environments, far grander in scale and non-linearity than ever before. Every objective is achievable through many different routes and tactics – from lurking through shadowy depths to unleashing silent attacks from above, how Styx progresses in each mission is entirely up to you.

Following its positive reception from press and players, the centuries-old goblin assassin Styx returns in a new stealth game, Styx: Shards of Darkness, with a bigger budget, bigger ideas, and a new engine: Unreal 4. Master of Shadows was a valiant exploration into the world of the green goblin thief, but Shards of Darkness will delve deeper into a complex narrative and fully realized world. 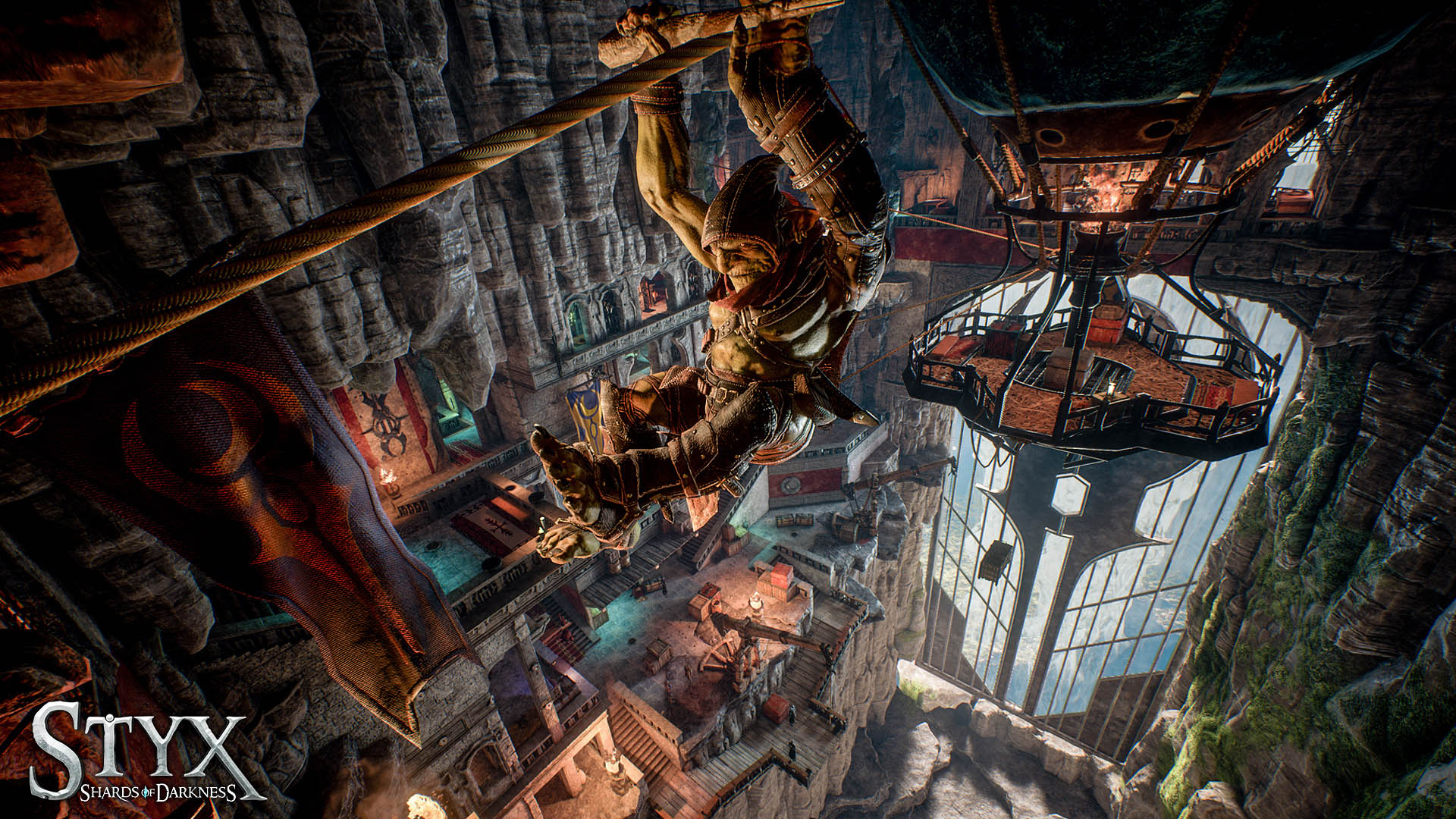 Following the fall of Akenash tower, an extraordinary matter has forced Styx out of hiding to infiltrate Korrangar, the city of the Dark Elves. Supposedly impregnable, a diplomatic summit offers Styx a chance at slipping in unnoticed, as he learns that the event is nothing but a mere facade…

Embark upon a stealthy adventure with new enemies, new environments, and a plethora of new mechanics aimed at refining the abilities and movement of Styx; grappling around corners, climbing ropes, and using his trusty knife as a zip-wire. Shards of Darkness aims to offer unparalleled freedom of movement, along with refined stealth and assassination mechanics, expanding and improving on the strengths of Styx: Master of Shadows. 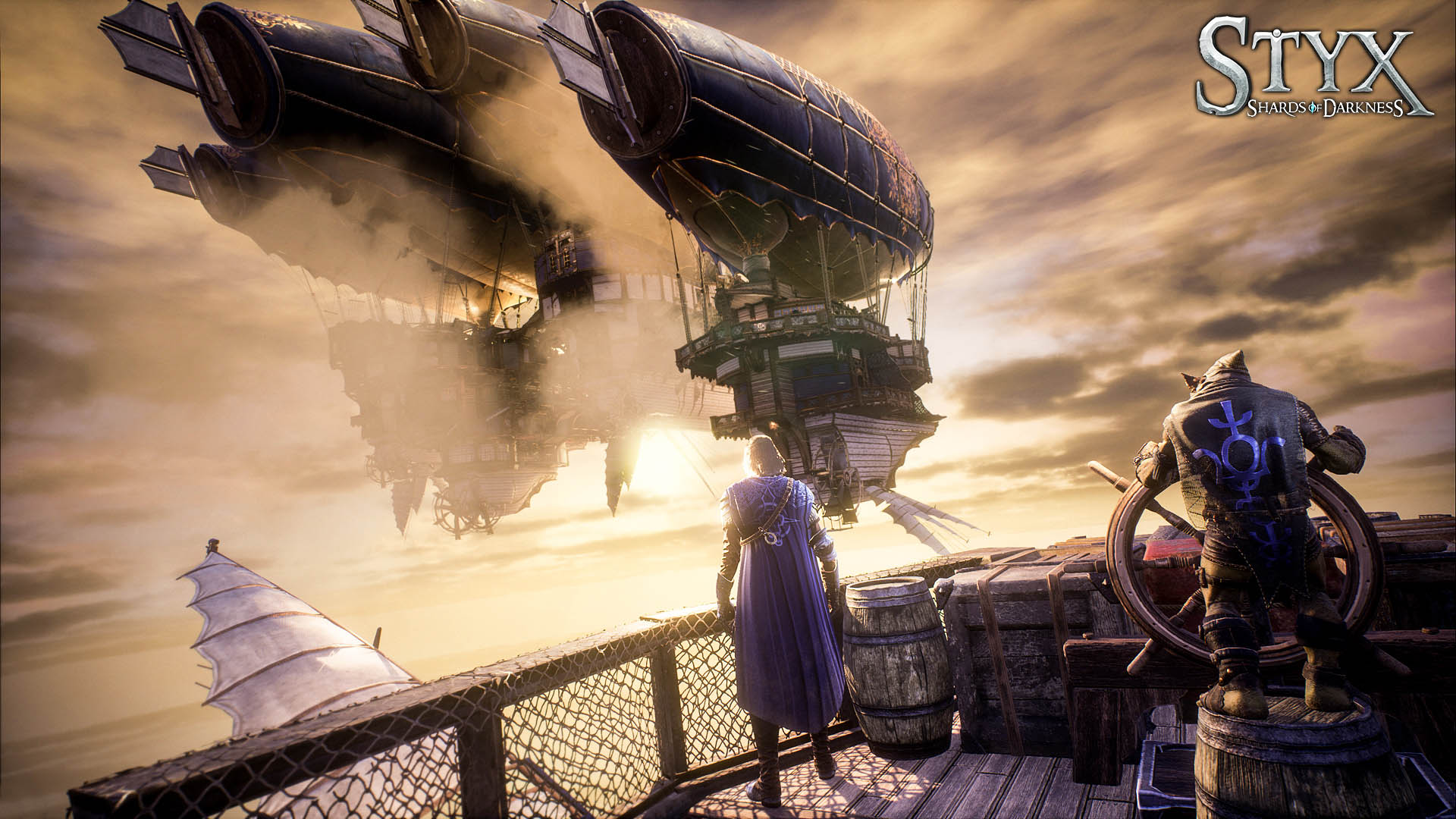 Players who preorder now get exclusive access to the Akenash set, granting them the iconic outfit and dagger seen in Styx’s first adventure.