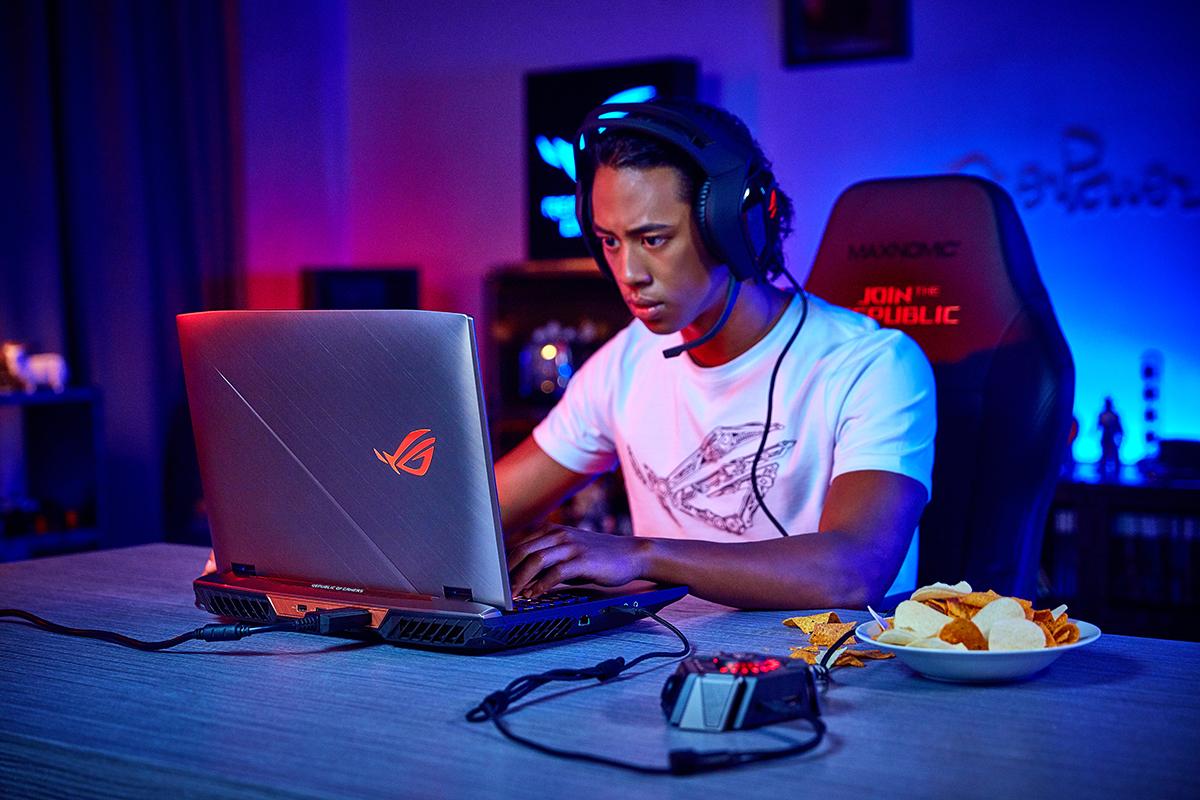 ASUS has announced to us here at STG that their latest ROG gaming laptop range, including the world’s first gaming laptop to feature a 17.3” Full HD IPS display with 144Hz refresh rate, will be available in Australia from this month – November 2017.

First up is the ROG G703 is the world’s first gaming laptop to feature a 17.3” Full HD IPS display with a 144Hz refresh rate. This provides gamers with the most immersive gaming visuals never before seen on laptop displays, and a competitive advantage in fast-paced games such as first-person shooters (FPS) or racing games.

By employing a unique design and new liquid-crystal mix, the 17.3” Full HD panel used in G703 is the most responsive IPS display ever to be used on a laptop. It also features NVIDIA G-SYNC technology, and with the 144Hz refresh rate and 9ms response time, the ROG G703 provides smooth and seamless gaming visuals, without visual tearing, lag, ghosting or obvious stutter. This gives gamers a visual experience similar to desktop monitors, and provides a competitive advantage in fast-paced FPS games, especially in situations where precision is required.

The ROG G703 features the latest unlocked Intel Core i7-7820HK processor, overclocked out of the box to a frequency of up to 4.3GHz, compared to the stock turbo frequency of 3.9GHz. This is achieved thanks to the innovative and patented Anti-Dust Cooling system (ADCS). 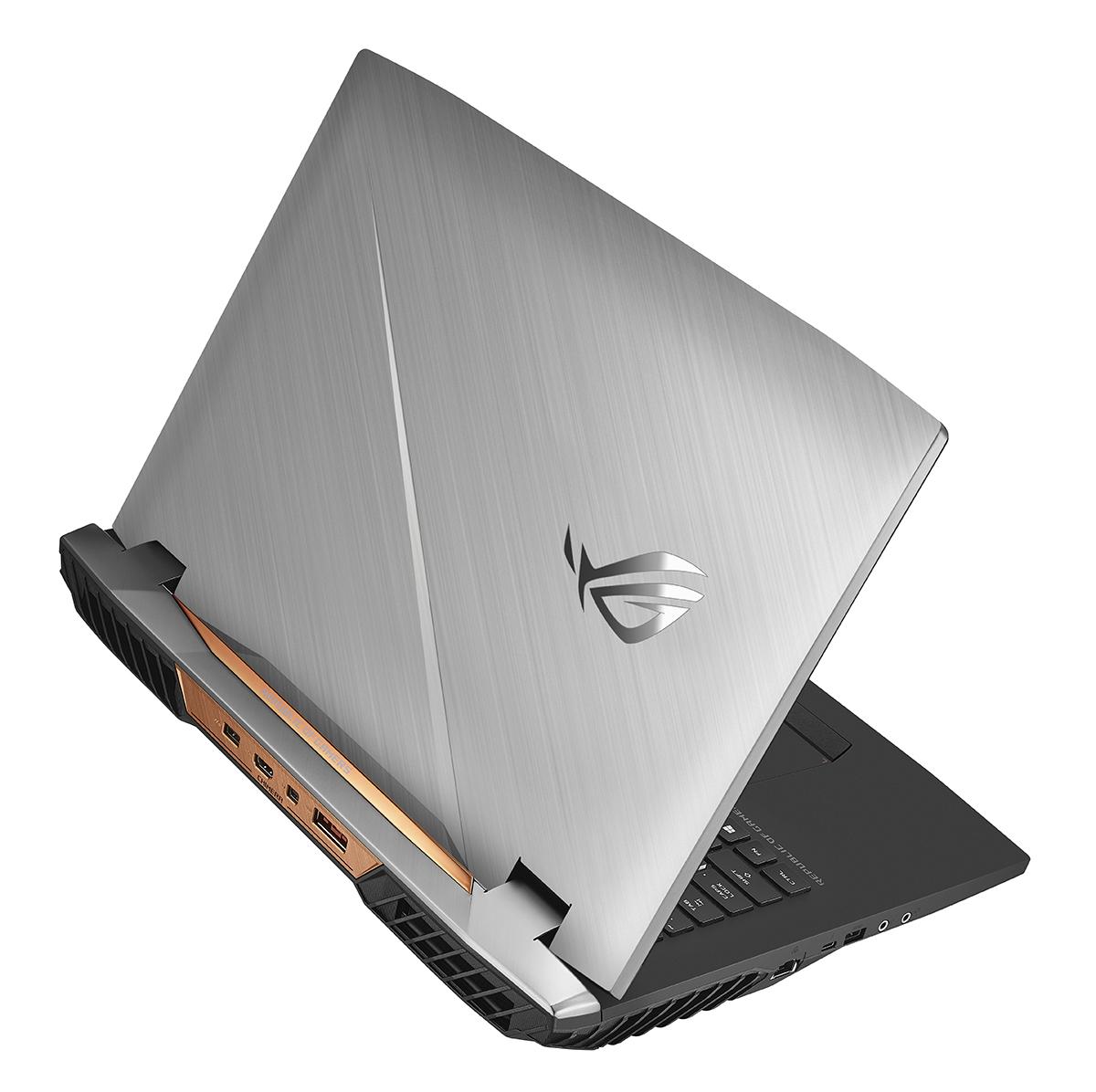 The ADCS helps the system rid itself of dust and particles through two dedicated tunnels, preventing build-up in the thermal fins to increase system stability and lifespan. There are two high-performance 12V dual-outlet fans blowing air through the ultrathin cooling fins on the heatsink. The fans are able to spin 20% faster to improve airflow by up to 42.5% compared to regular 5V fans.

The ultrathin cooling fins measure just 0.1mm thin — half the thickness of regular industry standard fin size. This ultrathin design enabled ROG engineers to add more fins to increase the total surface area for heat dissipation by 16%, while leaving a larger gap between fins to reduce air resistance by 7%.

Users are also able to regulate fan speeds via the ROG Gaming Center to control noise levels and power consumption. They can boost fan speeds to cope with the demands of graphics-intensive gaming sessions, and lower it for less-demanding tasks such as browsing the internet or watching video. 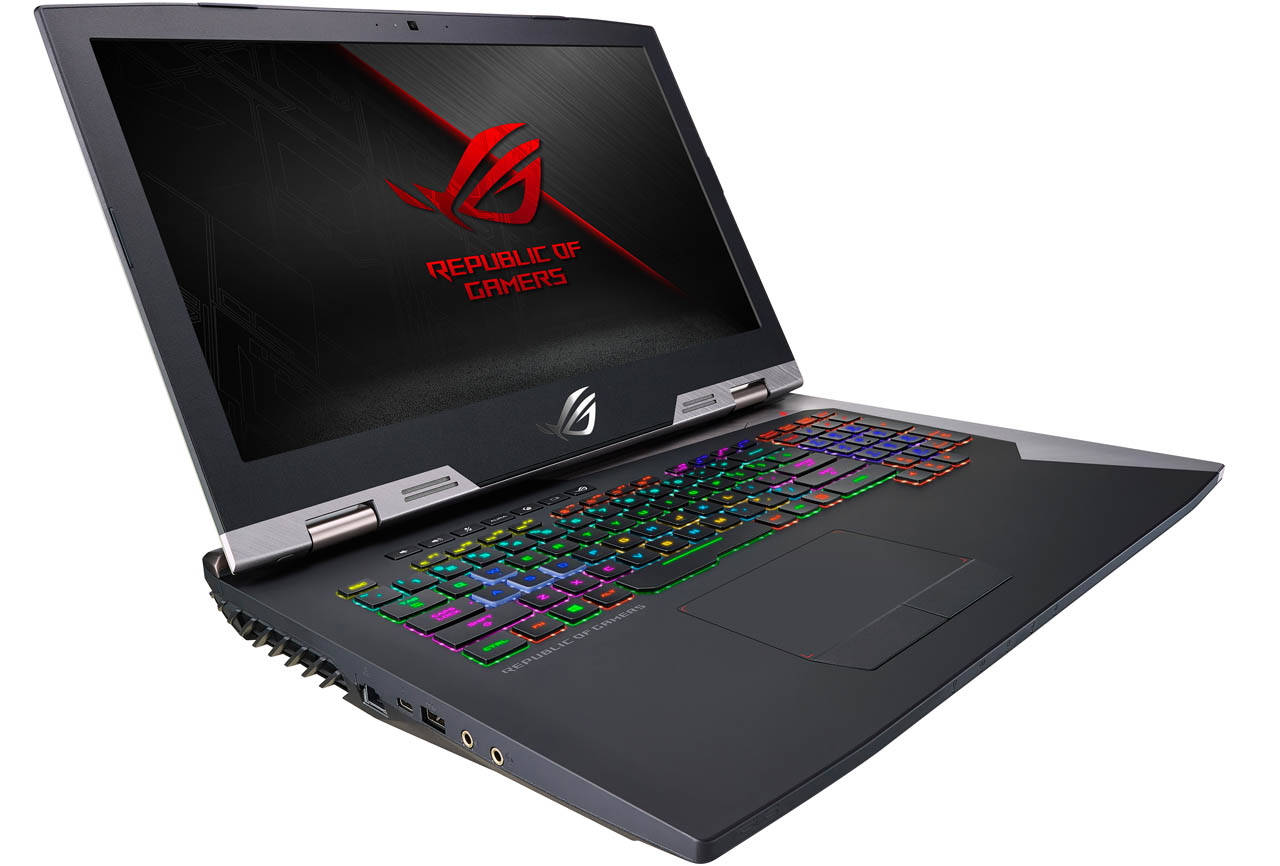 The ROG G703 features an overclockable NVIDIA GeForce GTX 1080, capable of reaching a maximum clock speed of 1974MHz for improved graphics performance and is fully VR-Ready with support for both the Oculus Rift and HTC Vive headsets. The 8GB GDDR5X graphics memory can also be pushed up to 10.3GHz (effective) and the 32GB of DDR4 RAM found inside will run at 2800MHz. In addition, the G703 features a 512GB M.2 PCIe NVMe SSD and a 1TB HDD. Users can also choose to upgrade the system on their own, supporting up to a maximum of 64GB of DDR4 RAM and dual M.2 PCIe NVMe SSDs for RAID 0 support. 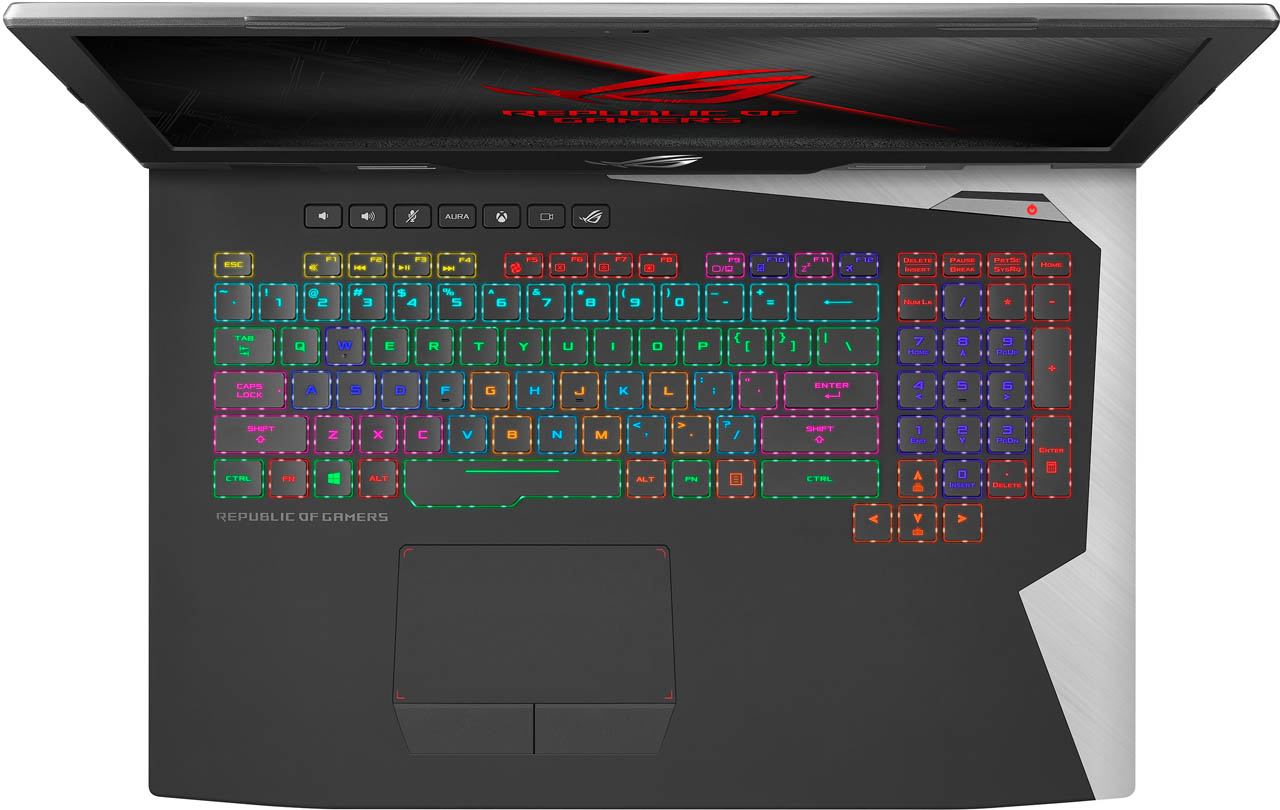 The ROG G703 also features a build-in wireless Xbox One controller adapter, supporting up to eight Xbox One controllers without the need for an external USB dongle. There are also extensive connectivity options available including Thunderbolt 3, Mini DisplayPort 1.4 and HDMI 2.0, all capable of outputting to 4K UHD displays at 60Hz. This allows the G703 to support up to three external monitors simultaneously, to either play games, multitask or even content creation.

The G703 embodies ROG’s endless endeavors to break limits and defy convention! It delivers on the ROG commitment to provide the best gaming experience, and is sure to meet the demands of the most hardcore gamers.

The ROG Strix GL503 and GL703 are all new lightweight and portable gaming laptops made for those on the go; featuring 15.6” and 17.3” displays, as thin as 23mm and as light as 2.3kg, featuring a new distinctive and strikingly attractive design.

With the latest 7th Gen Intel Core i7-7700HQ quad-core processor and up to VR-ready NVIDIA GeForce GTX 1060 graphics, the ROG Strix GL503 and Strix GL703 deliver the fierce performance required to participate and succeed in esports competitions — as well as the ability to handle demanding multitasking for superb productivity. The Strix GL503 and Strix GL703 are also easily expandable, and able to accommodate up to 32GB of fast 2400MHz DDR4 memory. 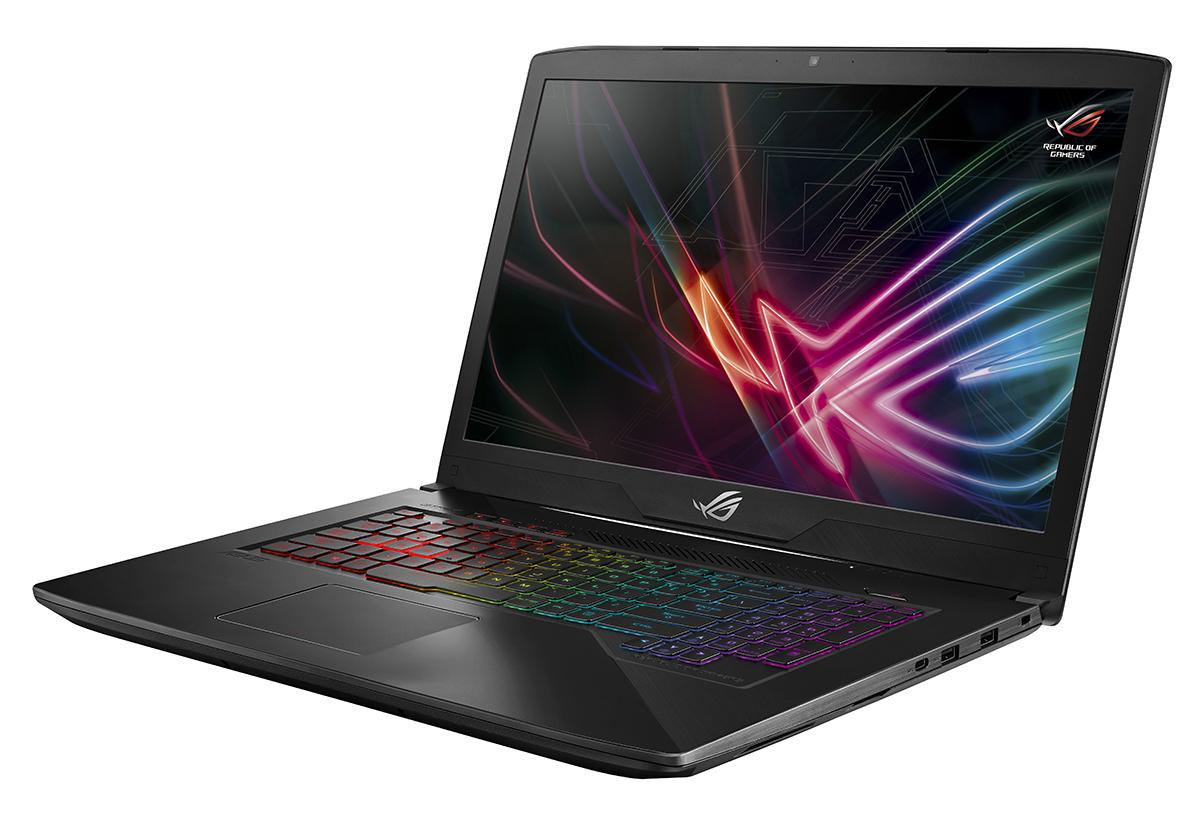 Compared to many gaming laptops, the Strix GL503 in particular is remarkably sleek, slim and light, weighing just 2.3kg, with profile that is just 23mm thin. This great portable form factor does not sacrifice performance and provides agile firepower for those who like to game on the go.

Both models also feature an ASUS Aura RGB backlit keyboard, allowing users to create customised zone illuminated profiles. The gamer-friendly WASD key group is highlighted for easy identification and the N-key rollover anti-ghosting technology ensures that inputs are tracked precisely, no matter how many keys are pressed at the same time. To further aid accuracy, and for added comfort, each key also benefits from a 0.25mm keycap curve.

The ROG Strix GL503 Hero Edition is an all-new gaming laptop series built from the ground up for fearless multiplayer online battle arena (MOBA) heroes, and optimised to deliver a competitive edge in MOBA games such as League of Legends and Dota 2, as well as other RTS and RPG titles.

The ROG Strix GL503 Hero Edition allows gamers to lead the way armed with a powerful Intel Core i7-7700HQ processor and NVIDIA GeForce GTX 1050 graphics. The laptop also packs a 120Hz wide view display and a desktop-style keyboard that’s made for victory, with N-key rollover for a fast and precise response to every key input as well as a 20-million-key-press lifetime for ultimate reliability. 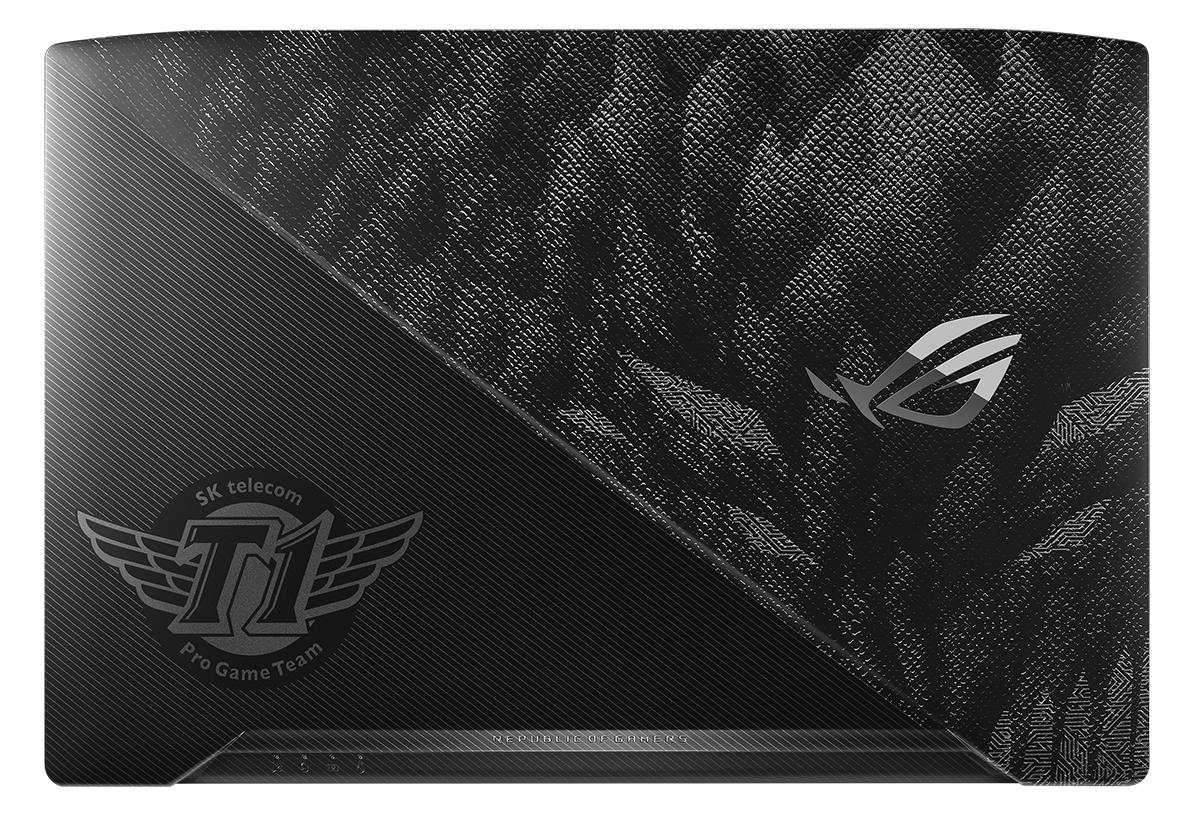 The ROG Strix GL503 SCAR Edition is an all-new gaming laptop series built exclusively for the sharpest shooters and optimised to gain a competitive edge in FPS titles such as Counter-Strike or Overwatch. 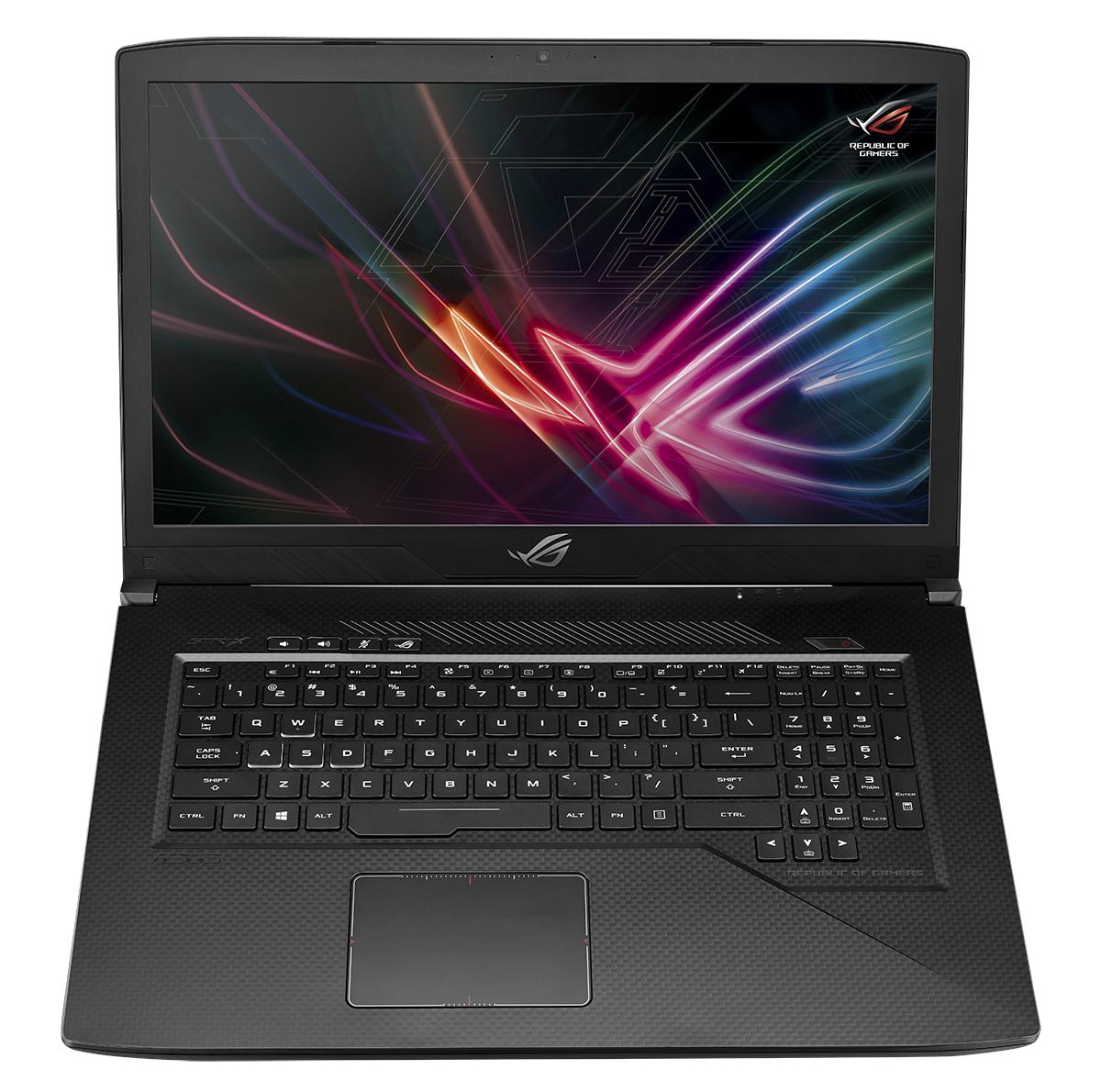 The ASUS FX503 is a compact and powerful laptop that’s perfect for gaming on the go. It features the latest 7th Gen Intel Core i7-7700HQ processor, up to NVIDIA GeForce GTX 1060 graphics and a 24mm thin profile, weighing just 2.3kg.

For reliable cooling during gaming sessions, the FX503 employs a pair of copper heat pipes and a dual-fan system to independently cool the processor and graphics card, allowing graphically intense gaming sessions without thermal throttling. An additional Fan Overboost function maximises cooling efficiency, ensuring that the FX503 has the stability required for all tasks.

The FX503 features a stunning 15.6” Full HD IPS display, delivering great contrast and colour consistency even when viewed from extreme positions, meaning it’s always easy to see what’s on the screen. A matte finish is also applied to the display to virtually eliminate distracting glare or reflections. 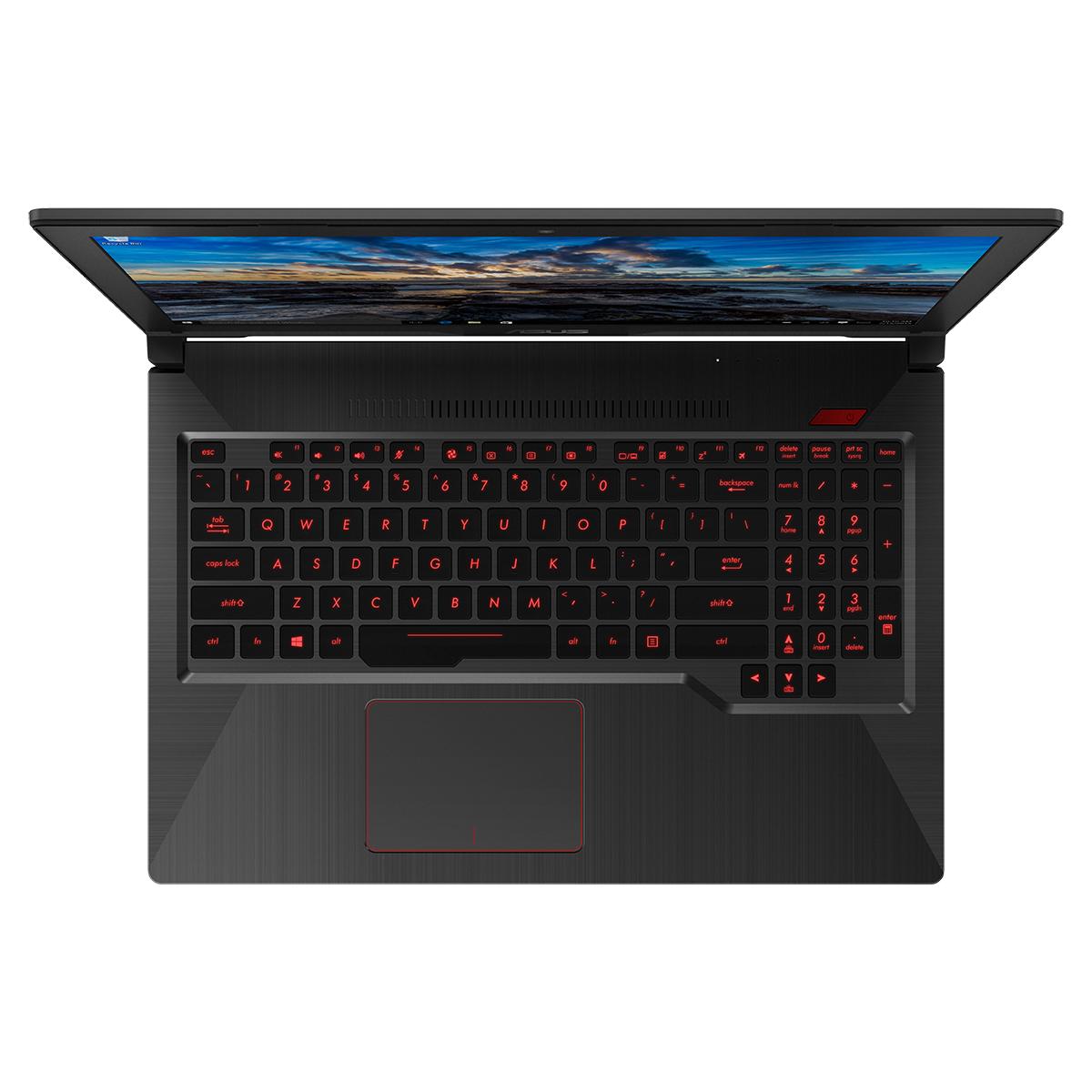 The ROG G703 will be available in Australia at the end of November 2017 from select channel partners starting at $5,999 AUD.

The ROG Strix GL503 and GL703 will be available in Australia from mid-November 2017 from the ASUS Shop, JB HiFi and select channel partners starting at $1,899 AUD.

The ROG Strix GL503 Hero Edition is available now in Australia for pre-order from the ASUS Shop starting at $1,999 AUD.

The ROG Strix GL503 SCAR Edition will be available in Australia at the end of November 2017 from the ASUS Shop and select channel partners starting at $2,599 AUD.

The ASUS FX503 will be available in Australia from December 2017 from the ASUS Shop and select partners starting at $1,699 AUD.