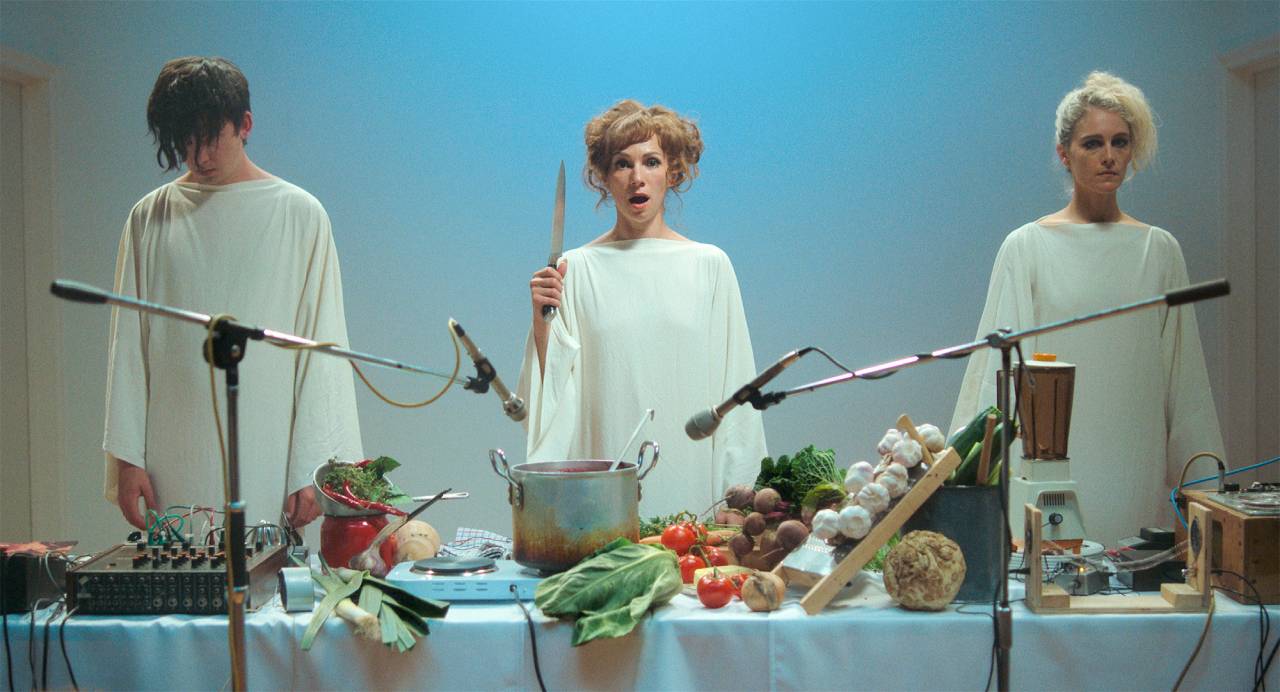 In Flux Gourmet we are introduced to the world of the Sonic Catering Institute, a place where the worlds of food and sound intertwine in performance.

Our guide through the bizarre world of sonic catering is Stones (Makis Papadimitriou), a writer hired to document residencies through interviews and observations. Narrating in Greek, he is our way of navigating the artistic chaos. Mild-mannered and self-deprecating, he is an outsider and is isolated even more due to his embarrassing gastric symptoms. 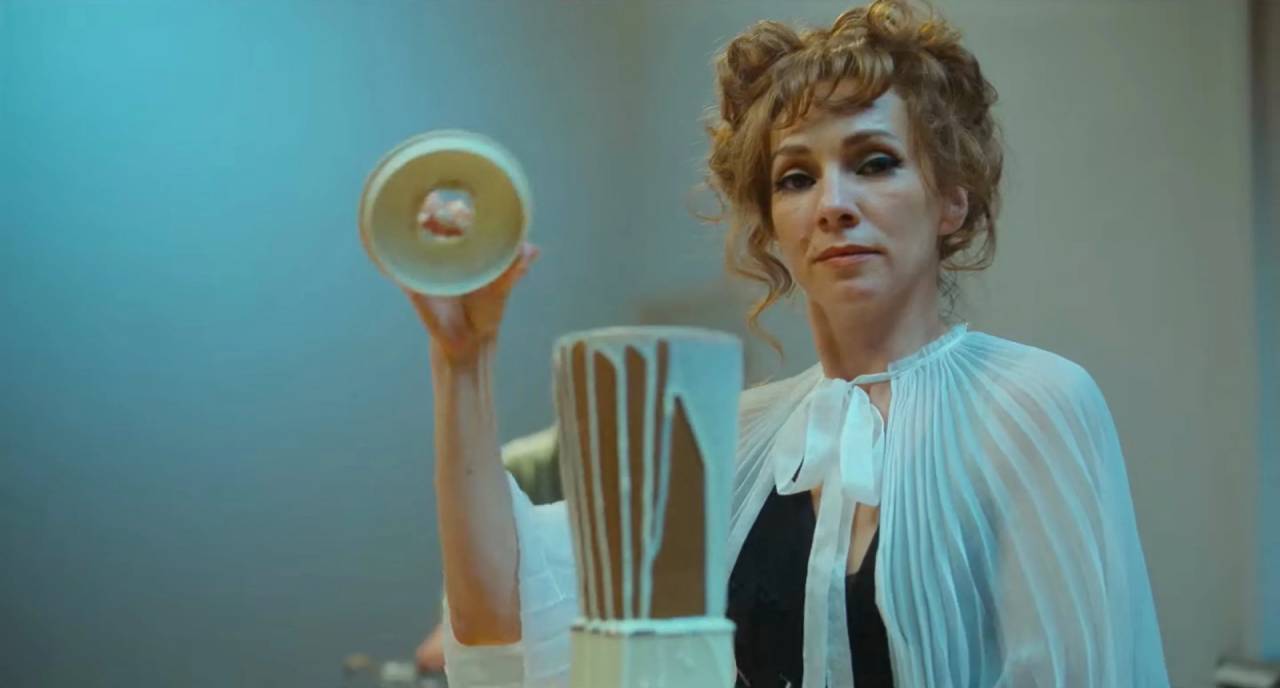 In residency are the sonic collective of Elle (Fatma Mohamed), Billy (Asa Butterfield) and Lamina (Ariane Labed). Elle is uncompromising in her vision and rules the collective with an iron fist.

Billy carries a weathered copy of an equipment catalogue and has Oedipal relationships with women due to the absence of his mother. Lamina is the moderating force but is also not afraid to call out Elle’s egotism.

While previous residency alumni may have just explored the interplay between sound and food, the collective (who have difficulty deciding on a name) have a unique advantage thanks to Stone’s gastric predicament: they can explore the relationship between food and the gastric system by making his gastroscopy and colonoscopy a performance.

Stones’ anxiety about the outcome of these procedures is not helped by the pompous and caustic Dr Glock (a brilliant performance by Richard Bremmer), who admonishes his peers for not having an encyclopaedic knowledge of Classical Greek myth and literature. 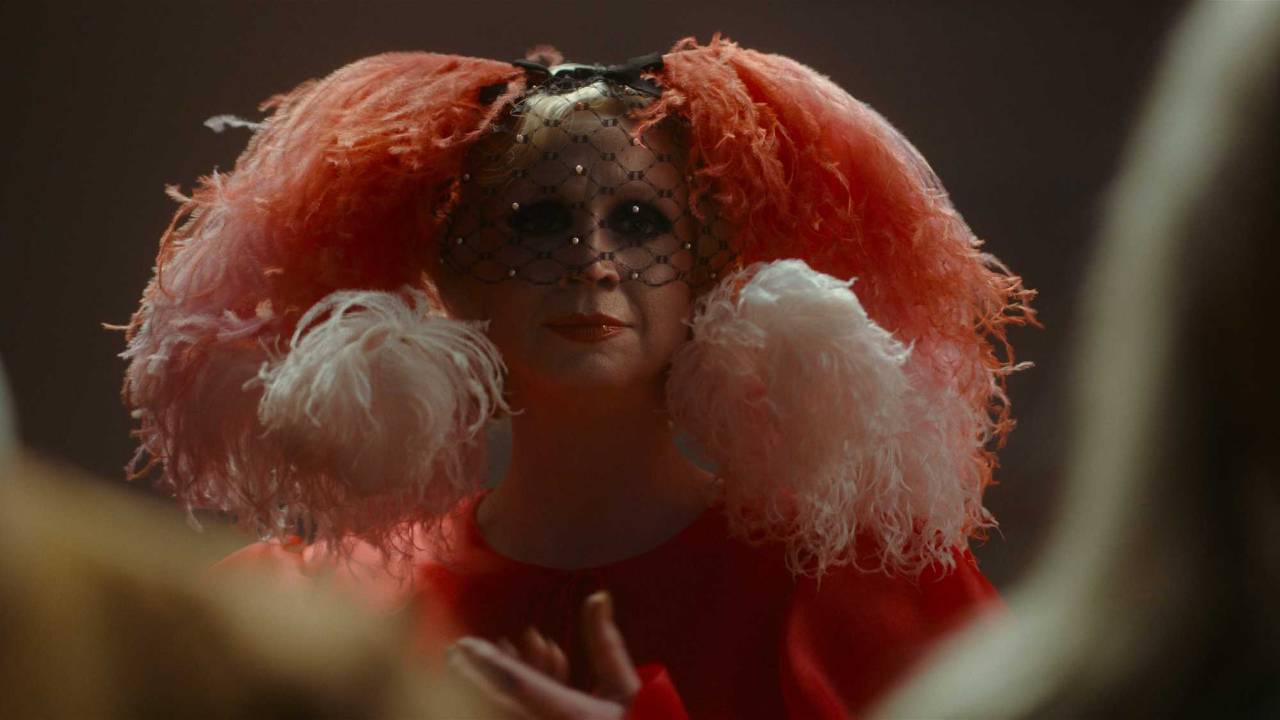 This is the film you show someone who has not seen his work before to bring them into Strickland’s world. The reason the film is so accessible is in part due to the delightful absurdist humour that is sprinkled throughout.

The dialogue is also exceptionally cheeky in parts, including Dr Glock’s outburst of “…because of a formative psycho-sexual trauma, you’re missing out on a vital source of vitamin D!” 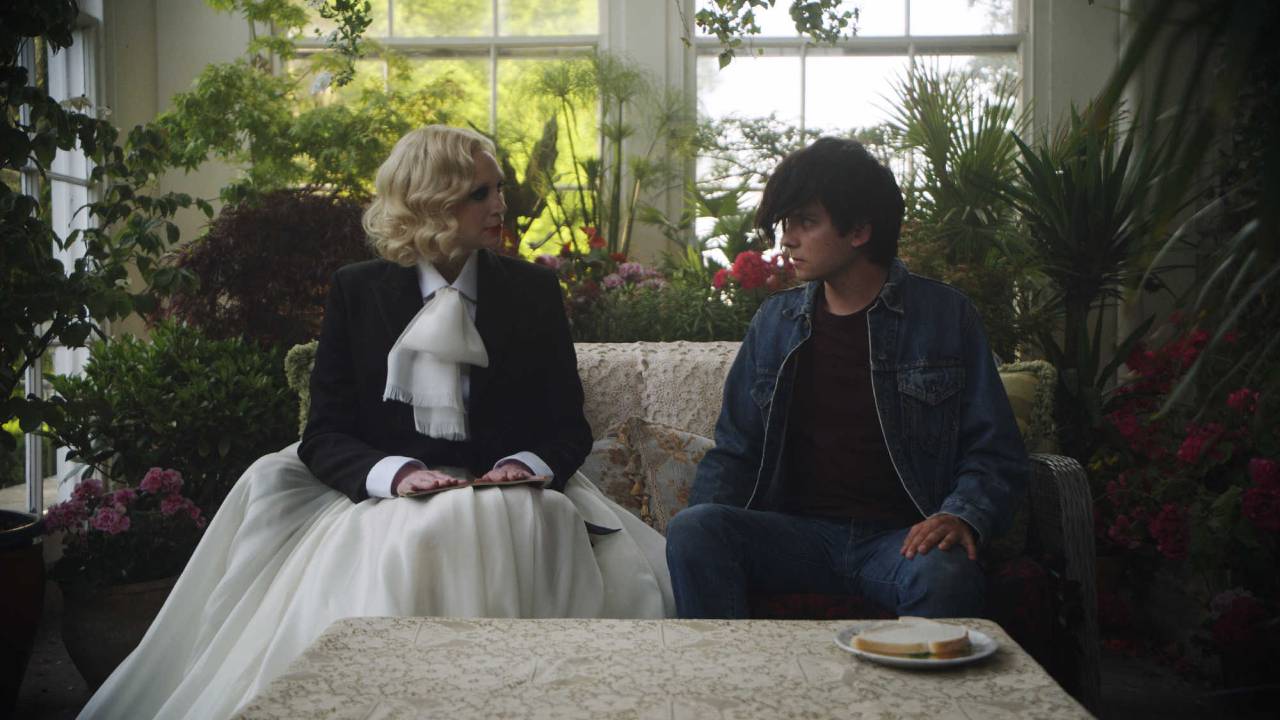 Having Stones as a narrator also makes Flux Gourmet incredibly accessible to the first-time viewer. We grow to genuinely care about his wellbeing, and so do the collective. We’re not left to navigate the strangeness of sonic catering alone, we have Stones with us. It’s a testament to Papadimitriou’s performance.

Flux Gourmet also has some nods to Strickland’s past work that will be welcomed by fans. Bremmer, Christie and Mohamed have all appeared in Strickland’s films previously. Sound was explored in Berberian Sound Studio, including the use of food for foley. An audio recording during one of the collective’s performances mentions a dominatrix and the use of a human toilet which links back to Mohamed’s role in The Duke of Burgundy as a carpenter of human toilets. And the most visually recognisable wink to Strickland’s previous films is Christie wearing a red dress that is the same hue as the accursed dress in In Fabric.

Flux Gourmet is not going to be for the viewer who wants an easy watch, but it’s not as intense or esoteric as Strickland’s other works. That being said, it bubbles with clever dialogue, well-structured characters and the visual magnificence Strickland is known for. 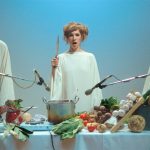