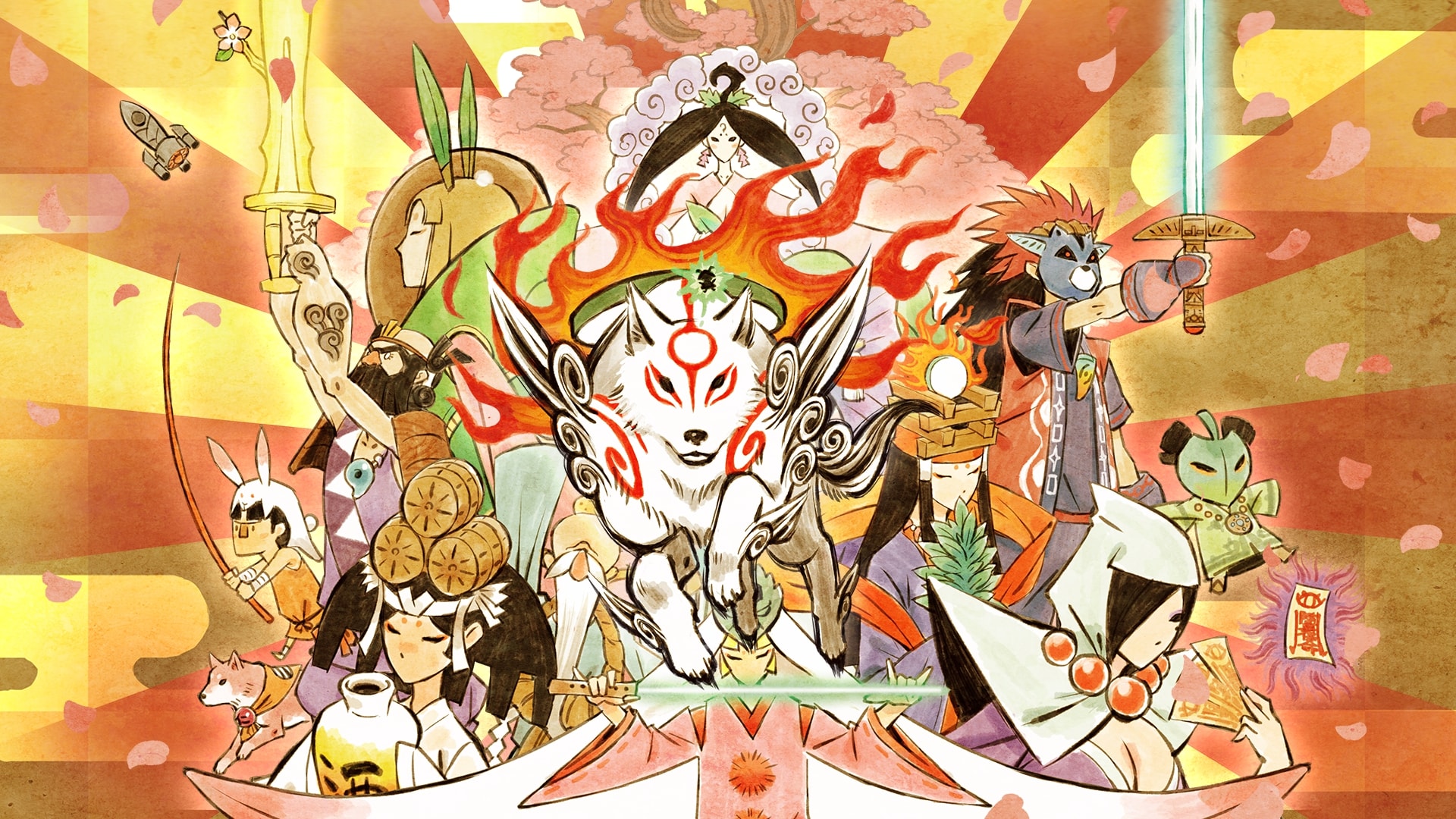 If Ōkami has appealed to you, there is no excuse to not have played it yet thanks to it being released on so many consoles since its original release on PS2.

If you didn’t play the original, or the HD remaster, or it’s re-releases including recently to PS4 and Xbox One, then now you can finally play it on your Switch. It may sound like I am being critical, but it is exactly the kind of game for me, yet 12 years and seven releases since Ōkami first came out, I have finally played it for the first time.

Ōkami tells the story of a darkness which has spread the lands again. Previously a dragon existed who didn’t go on a rampage if he received a human sacrifice on the regular. A hero and a wolf sealed the evil dragon away, freeing the village it lorded over, but the poor wolf lost its life and was immortalized as a statue. The game kicks off after the evil has been freed and the wolf statue comes back to life. 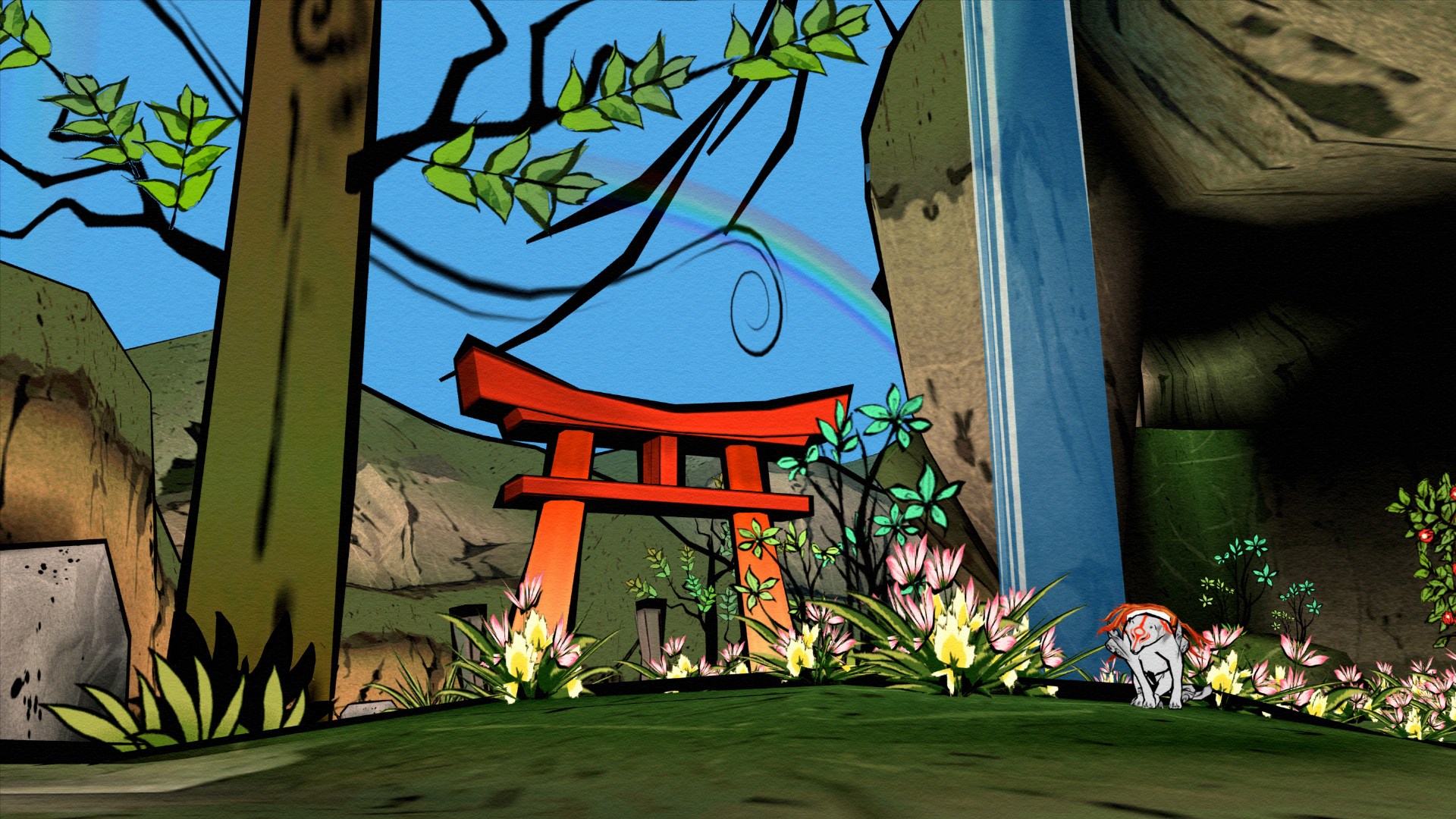 You control the said wolf throughout the game, the god called Amaratsu, or Ammy for short. Ammy has his wee friend Issun, a bug sized artist who provides most of the game’s dialogue. Ammy growls and barks, like a wolf does, so Ammy provides all the dialogue in a one-sided conversation with Ammy, or to the other characters, human or godly.

Ammy needs to travel around, beating demons, and attaining new godly powers from the other animal themed gods. What surprised me was how long the game is, while never feeling like it drags out the story. The main plot thread I thought I was following, only wound up being halfway through the game, which I was immediately excited by, because I didn’t want to leave the world of Ōkami.

The story is still unique enough that it’s easy to get invested in, with overtly silly humor used enough to make the game easy to sit back and enjoy, which is something else that has aged well. That may be the best reason for these releases. Thanks to the story not being overused elsewhere since, it’s still an interesting and fresh story to newcomers. 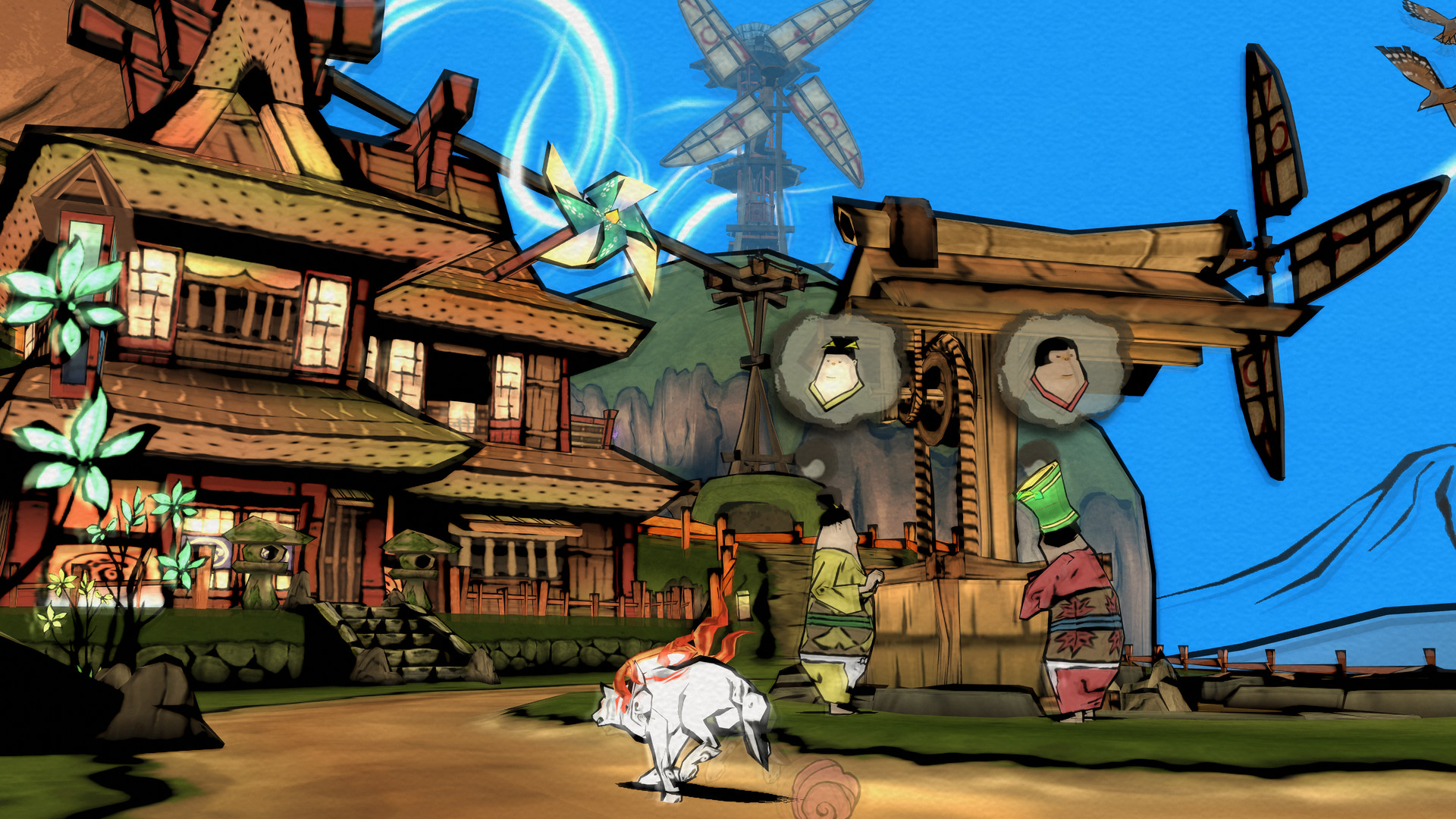 Gameplay itself is a third person action game, or third wolf-god action game that has you use a divine weapon on your back to hack and slash your way through enemies. When not hacking and slashing you run around exploring, solving puzzles, using the powers you gain from gods to unlock new areas. This interaction in the world uses the celestial brush, thanks to Ammy’s power and Issun’s artistic knowledge. You unlock the ability to make wind, bridges, bombs, or sunlight by holding the correct trigger, and drawing a shape on the screen, using touch, the joycon movement in the air, or an analogue stick.

The controlling of this can be finicky, especially if you use the analogue stick as a circle which can be hard to draw at the best of times anyway. The use of joycons in the air was clever and fun, but even that wasn’t my cup of tea. Instead the best way was to draw using the Switch’s touch screen, as that gives total control. It’s truly wonderful that such an important feature of the game, has so many options available to suit anyone, especially as you also use the powers in combat. 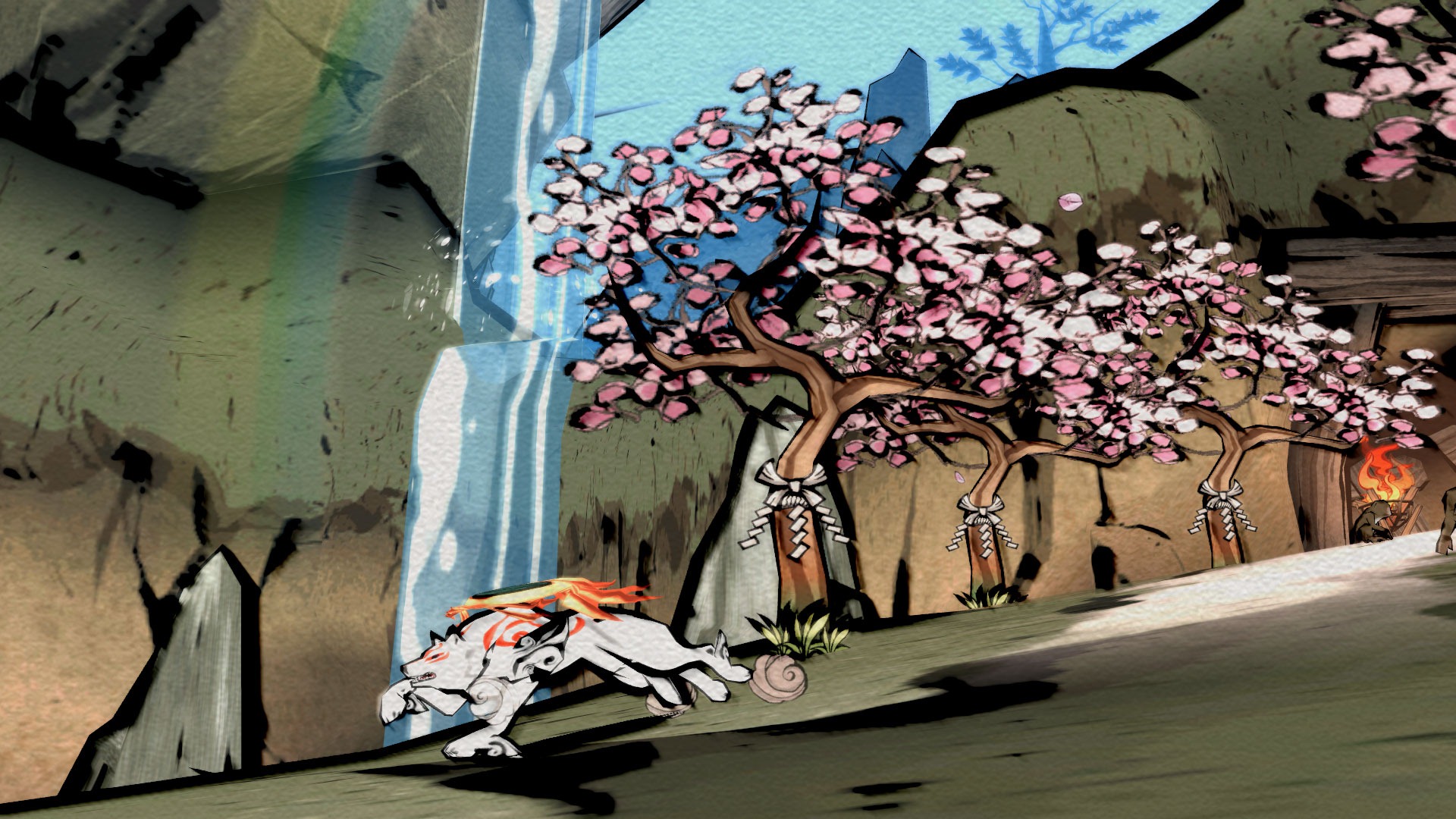 The most wonderful way the game has resisted the wrinkles of time is its art style. Ōkami is a gorgeous game that uses cell shaded comic book style art but using wildly varying brush sizes for the borders. This gives it a unique look that is distinct from most cell shaded works and looks truly wonderful. Mixed in with things like the uniquely proportioned people design, it’s not outrageous, but distinct.

One major flaw with the game is the camera controls. They always feel clunky, especially when it centers back behind Ammy in annoying ways. This is an area the game hasn’t appeared to be improved, as it feels exactly how I expect PS2 games to feel when you return to them. It’s a nitpick because you do get begrudgingly used to it, but it is the one constant reminder that it’s not a 2018 game. 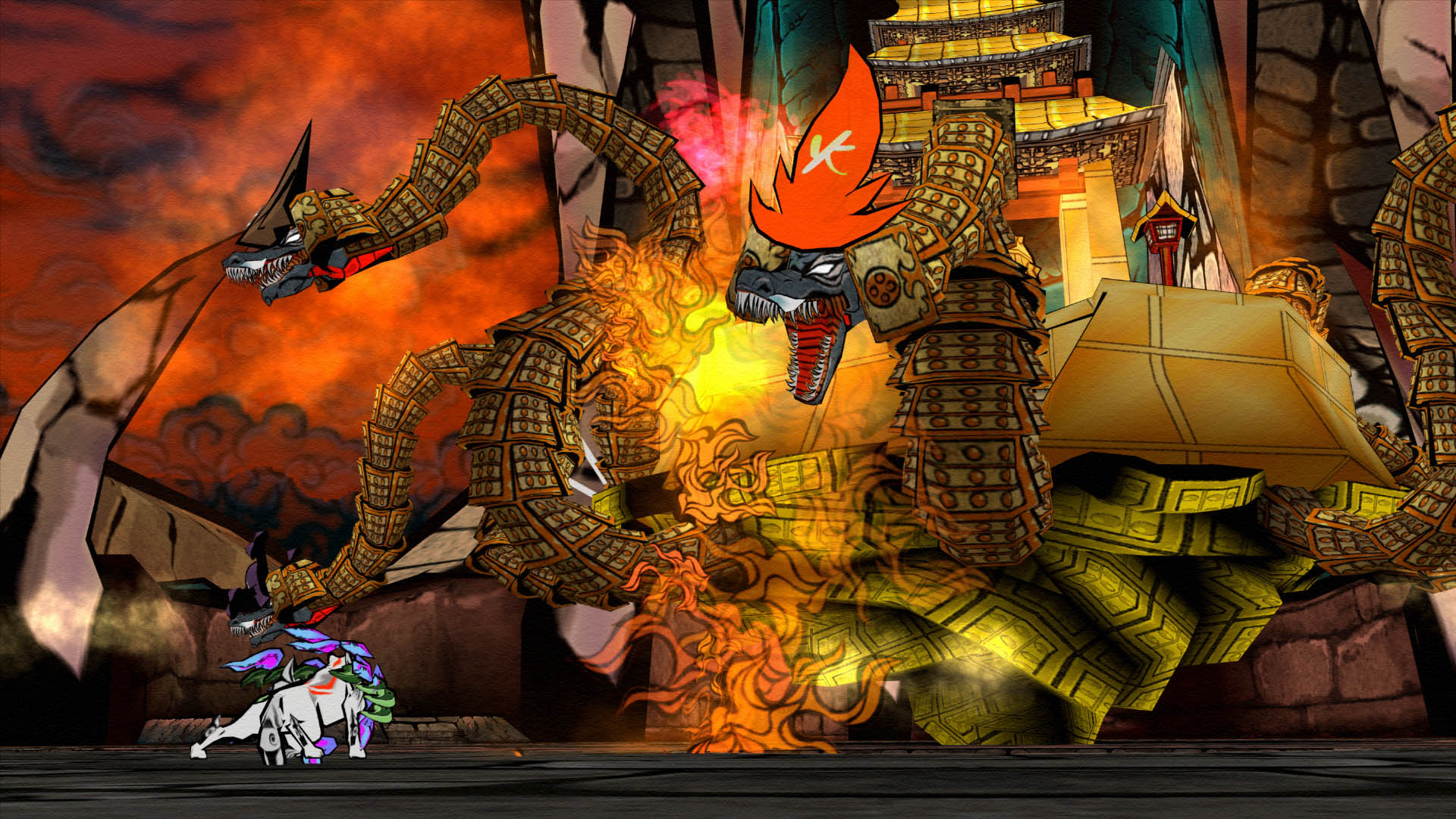 The only other nitpick I have is it uses the ‘animal crossing’ talking style of weird cut off sounds instead of words. Some people like it, but it’s a horrible sound to me, which you can tun off after the first cutscene. This is great as the game’s music is such a delight to listen to.

Ōkami is a game that almost totally feels like it could have been brand new in 2018. Its combat is simplistically fun, the world is interestingly beautiful, and the story is one you owe to yourself to experience. So, turn off the voices, sit back, and join Ammy for an adventure.