Just Cause 4 (Xbox One) Review 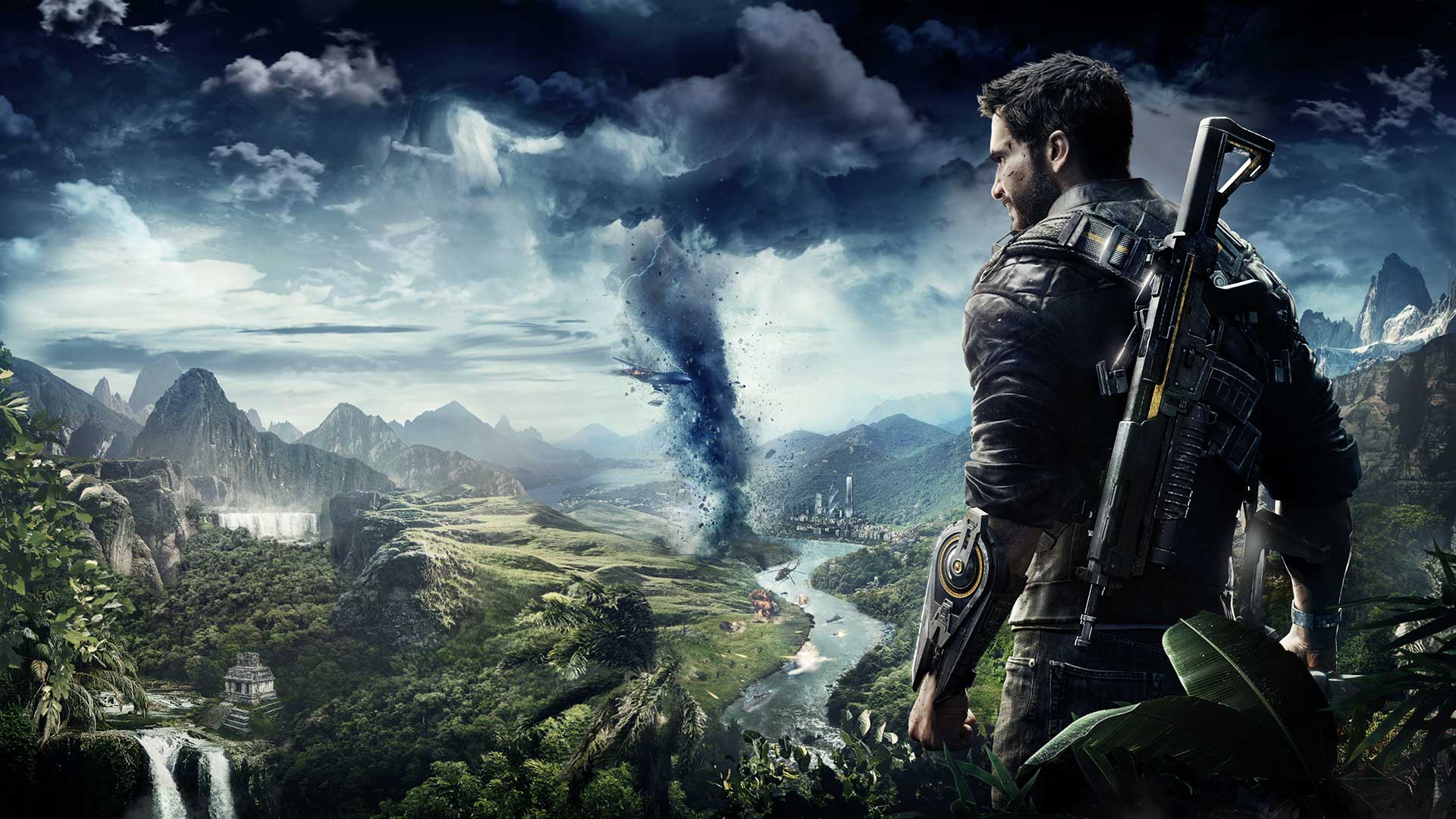 If you play video games for fun, pure, silly fun, go and buy this game. Now this is my first Just Cause game of the series and if you’re a seasoned pro you may feel differently to me, but if this is your first foray into the Just Cause universe then this is one to check out.

Senor Rico Rodriguez is on deck trying to shut down a South American Dictator who has taken control of the picturesque island archipelago Solis and seemingly has created a weapon of mass destruction that can generate devastating weather events, all in the guise of “helping” the country combat devastating weather events. Oh you evil genius, but seriously when will the law makers realise that creepy guys wearing expensive suits and slicked back hair are actually genius trying to overthrow you. Reminds me of the people who run upstairs in serial killer movies rather than running outside in to the open. But I digress. 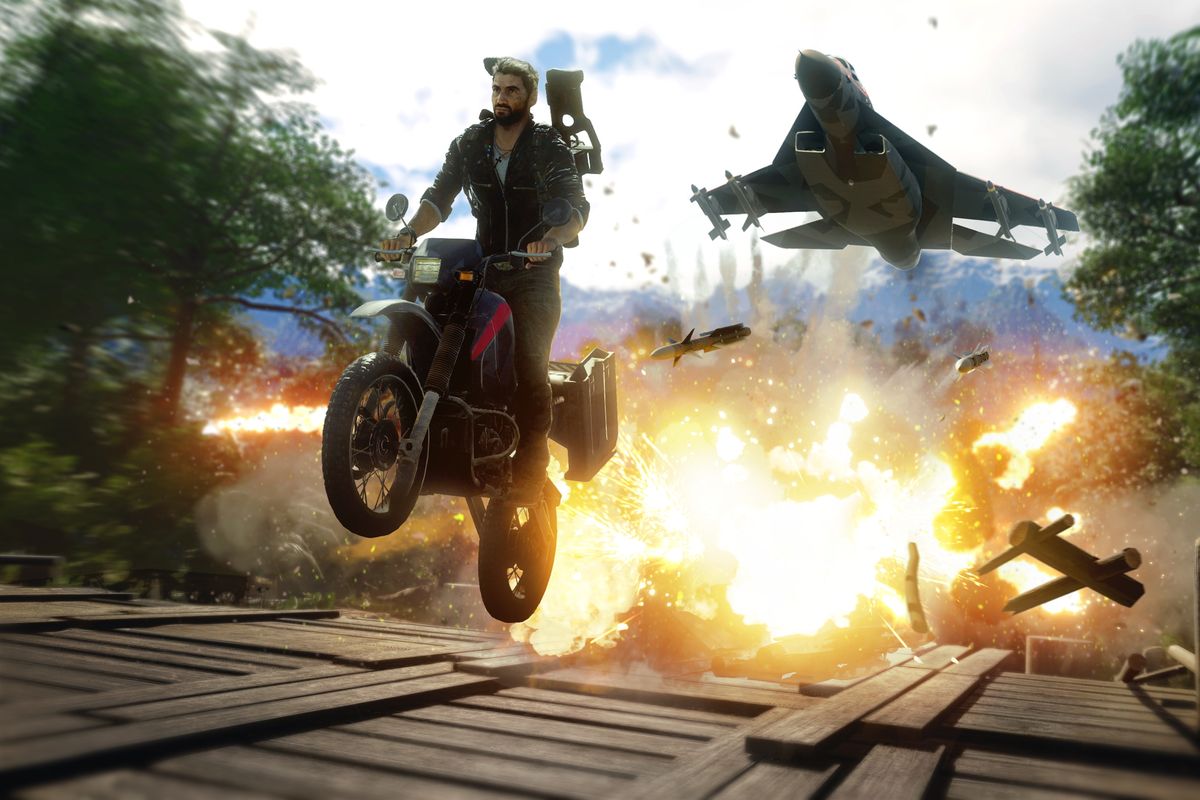 Your job as Rico is to stop Oscar Espinosa (the Dictator) and destroy the weather machine before it gets out of hand. There’s also the little detail of your Father being involved in the project and now he’s dead so the revenge meter is set to extreme in this game. You have your trusty grappling hook to help you, well, grapple and its a lot more fun than what I initially thought it was going to be. The speed at which you can travel large distances is stunning and that movement is even more highlighted when you use it in combat to change angles and heights on the poor souls trying to shoot this wannabe Spiderman.

The opening mission introduces you to the main protagonist, combat, movement, your sidekick and the overall plot of the game. Its refreshing to work through a game that provides a quick tutorial on the key systems in the game without have 62 pages of text or clicking ‘continue’ until your finger goes numb. I was prepped and ready to go after only a few seconds and slinging my body around precarious mountaintops and 50 story buildings. 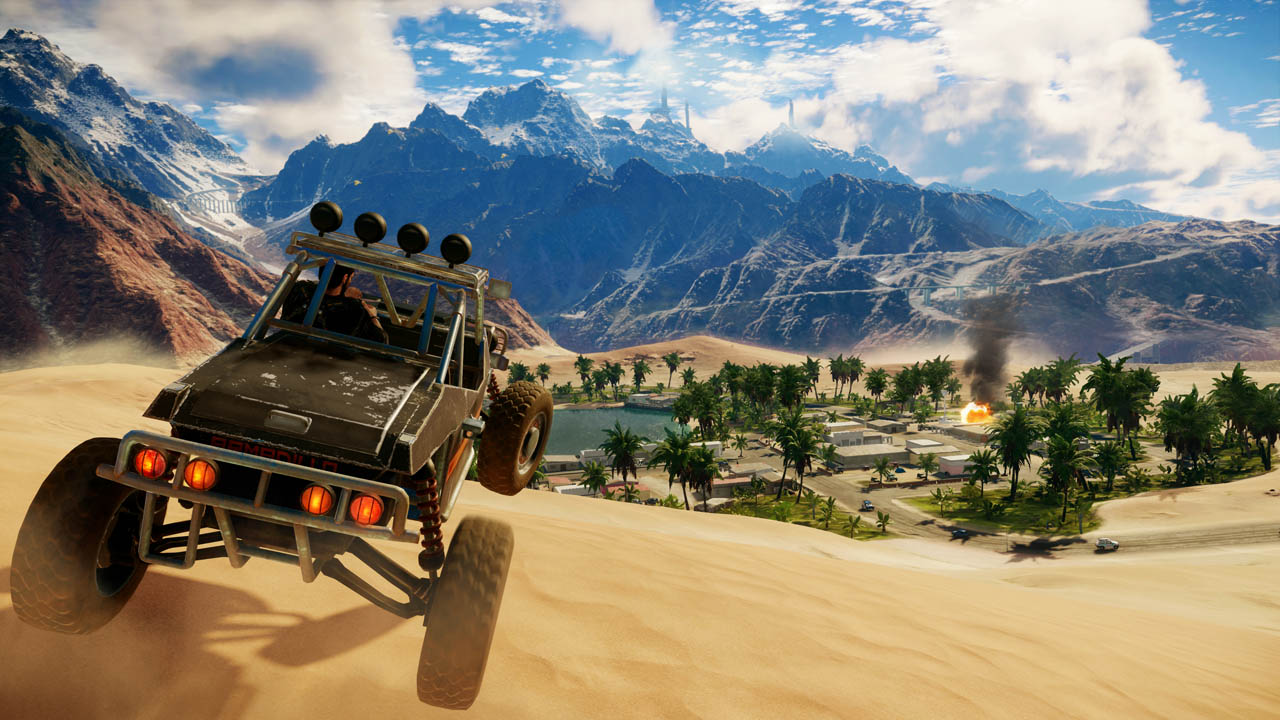 The main part of the game requires you to help form a resistance army and by completing missions, you’ll ‘recruit’ new soldiers and can take over a new territory on the map giving you unlocked equipment. I really like these types of mechanics as I have to be invested in completing as much as possible on the map in order to unlock new gadgets to play with, plus there is something satisfying about seeing my green empire growing. I would like to see contested territories similar to GTA: San Andreas. That was the pinnacle of territory investment for me. Unlocking new areas is great, fighting to keep them is 1000x better.

Combat in the game feels pretty good. I had to tweak the sensitivity when ADS since the responsiveness is a little lacking in this area so give it a try if you’re struggling like I was in the beginning. The guns are unique to each other and it wasn’t long until I found my favourites (21-J Smart Rifle & LRD-3 Sniper) and ran with them for every mission. I did have a problem with ammo and there were a few too many times that I ran out and either had to swap to inferior guns or use my grappling hook as a death whip. It was fun to use the no gun option to begin with but really limited how I wanted to experience the game. The crazy wind cannon and lightning gun need a quick shout out too just for pure silliness. There’s something about firing a tornado or lighting storm at enemies that just feels good. 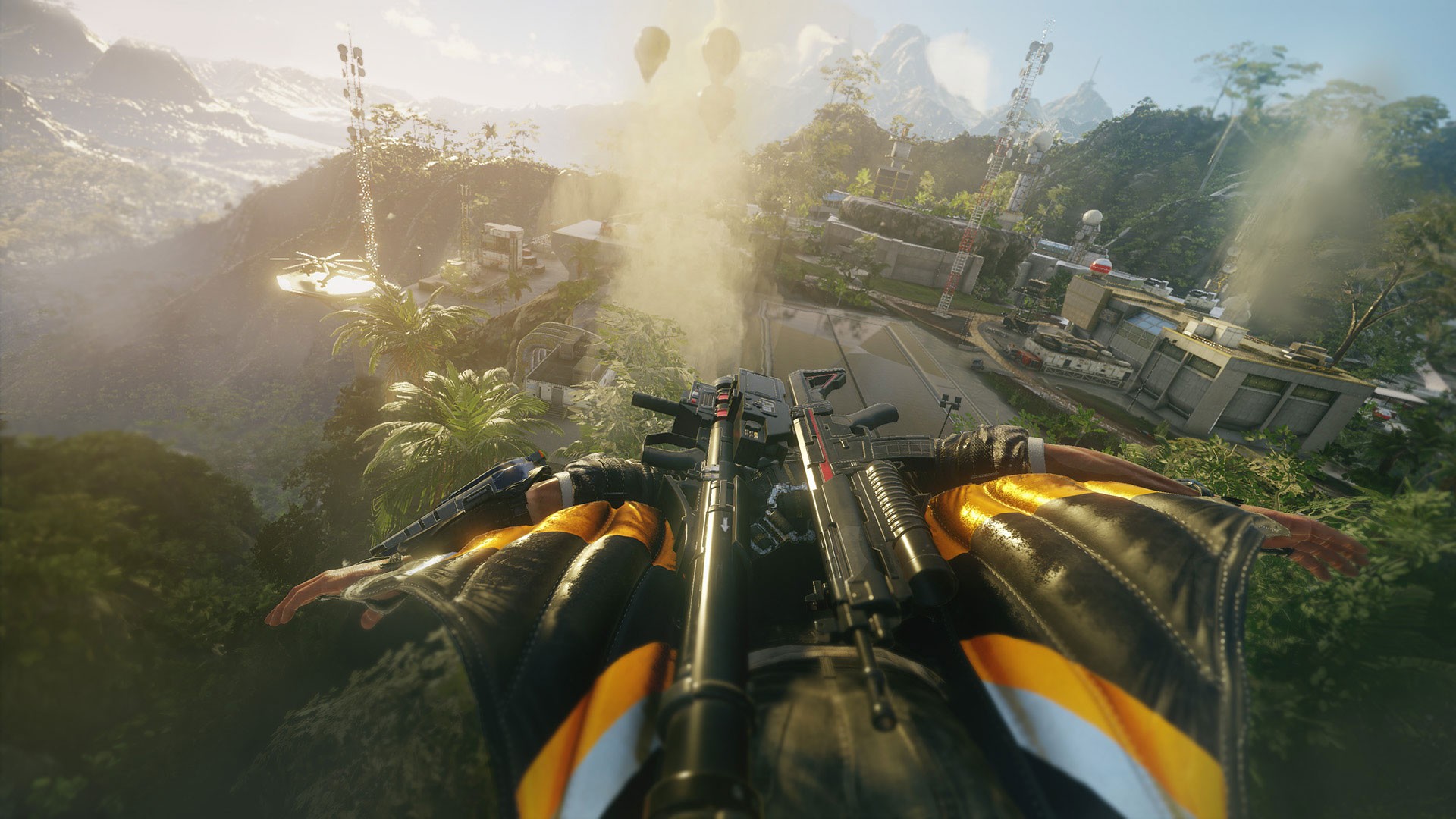 The enemies were easy to take down even to a point where I was hoping that I’d encounter some tougher mini bosses that would test my gameplay and make me think of how I could tackle the situation. There was one encounter I remember where I was standing out in the open and literally surrounded on all sides by snipers, heavy gunners and trash mobs and could easily run laps and pick everyone off. This shouldn’t happen. I should be punished for stupidity but the mixture of weak enemies and me having the healing ability of Wolverine makes for a pretty easy experience.

Quickly back to the grappling hook, you get to unlock new add-ons as you progress through the game and some of them are hilarious. You have three loadouts for your grappling hook that you can switch to on the fly and each of these have different actions depending on how you launch the hook. I ended up pairing the high balloon with the thrusters and couldn’t stop grappling enemies and sending them off into the sky looking like a spinning firework. Tethering enemy cars to hillsides when they’re trying to chase you down is also a highlight so definitely try that out too. 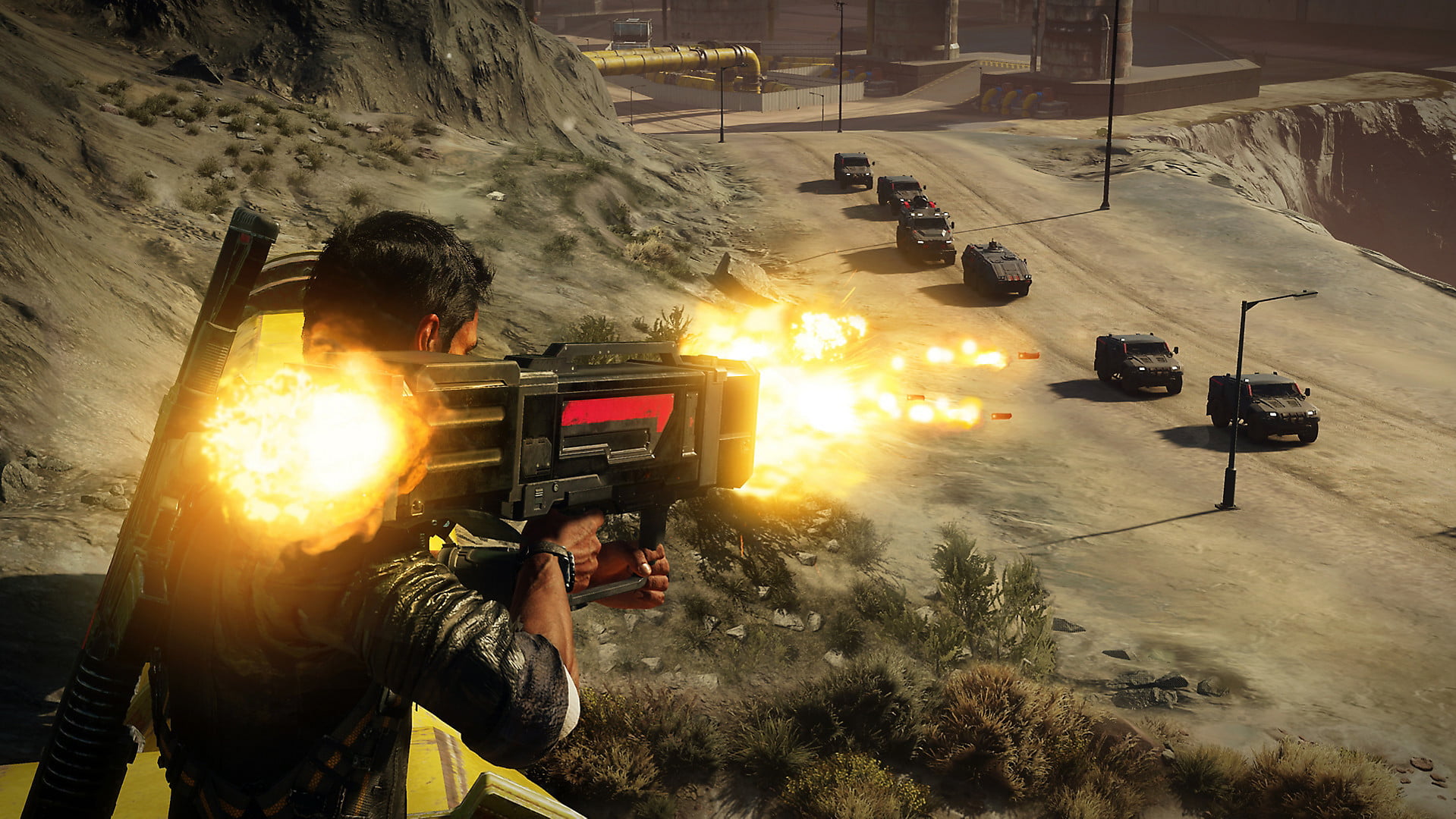 The countryside looks pretty good but I was a little disappointed that the Xbox One X wasn’t 4k 60fps as the game would have been a lot more visually appealing than what it currently is. Don’t get me wrong, there is nothing wrong with the way that the game looks but if you want to compete with some of the other high profile triple A titles that have released this year, you need to at least be on par with those.

When you start comparing Just Cause 4 to other titles, the wheels start to get a little shaky. Other titles have a deeper story, better visuals, smoother combat, more weapons, better dialogue, and greater character customisation. That’s not what this game is about though, if you want fast paced action with ridiculous weapons, the ability to blow up almost everything you see, over throw a Dictator, drive a muscle car at 200mph down the highway, all the while pretending to be Spiderman at the drop of a hat, then Just Cause 4 is for you.