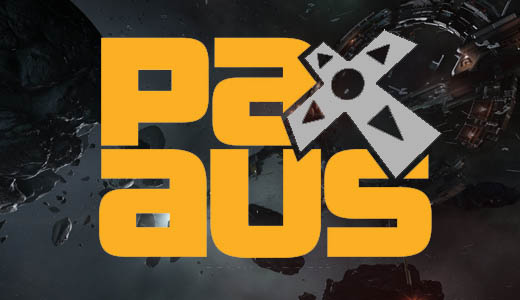 Earlier this month Melbourne’s PAX Australia 2014 was a celebration of independent video-game development. Whilst not exhibiting at the actual show, the master of million-dollar independent games design, Chris Roberts was in town.

Star Citizen, Chris Roberts’ ambitious space combat/trading adventure game, has entered the Guinness Book of Records for the Most Crowd-funded Project (Overall), having secured $39,680,576 from fans as of 4 March 2014. Right now that figure stands at $61,448,595, sorry… $61,448,830. The game’s website dynamically updates and they’ve earned some more money since I started writing this article. 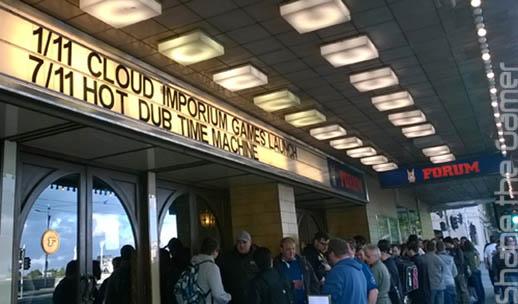 So how does such a niche game- basically a space combat simulator based on Roberts’ 1990s Wing Commander games garner this sort of fan backing?

I took myself along to the Forum Theatre in Melboune on the Saturday night of the PAX weekend to check out the Star Citizen fan event hosted by Chris Roberts, himself, to get some answers. 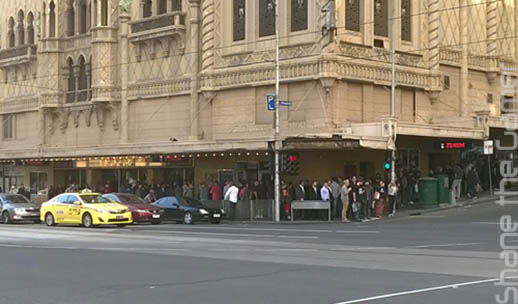 My press status often gets me some filthy looks when it comes to queue-jumping. I arrived half-hour early, general admittance was at 8:00pm but press and VIPs could get in from 7:00pm. I found the VIP queue at the front of the theatre went to join the back of the line, which snaked around the corner and right up the hill. This is a game that, even in Australia has a rather impressive amount of VIP backers.

Once inside I settled in with the throng of gaming press to watch Chris Roberts’ keynote presentation which was also being broadcasted live across the internet. 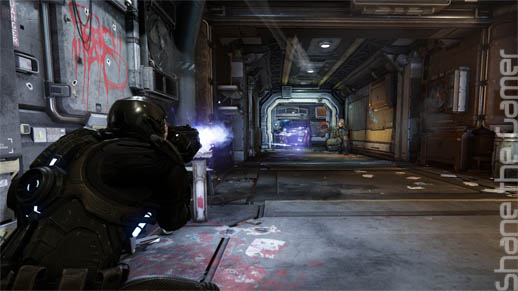 The show started with Cloud Imperium’s Aussie-born Vice President of Marketing, Sandi Gardiner in full space-pirate garb being arrested on the stage. Then on came the admiral, Chris Roberts himself, to riotous applause.

Star Citizen is a game unlike any other. Except, possibly, the similarly crowd-funded Elite: Dangerous which, unlike Star Citizen actually has a release date 16th of December this year. 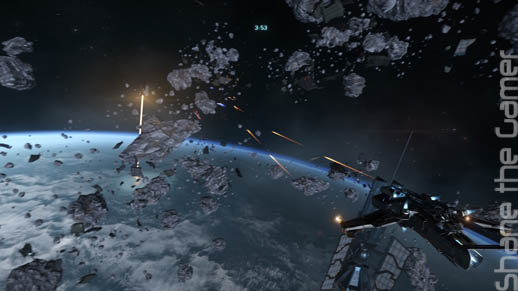 Whereas Elite: Dangerous’ modular design has allowed the team at Frontier Developments to focus development on a finished product- with additional features coming later via downloadable content, Star Citizen it going to remain in alpha/beta for the foreseeable future.

That’s not to say that backers don’t get something for their money, they do. But whereas getting to play Elite just cost me fifty-quid, Star Citizen’s purchasing system is slightly more complex and a lot more expensive. 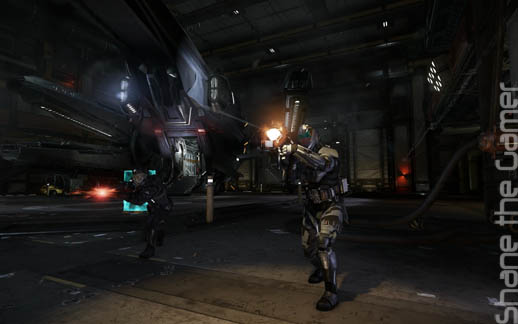 First you need a game package. Whilst the packages start at thirty bucks, you are not going to get access to the alpha or beta version of the game for this money- which seem absolutely pointless as you could be waiting years to play to finished game. $40 gets you a basic ship and a hanger to view it in.

You also get access to the beta (due the end of 2015), the Squadron 42 campaign and Star Citizen itself when they become available. 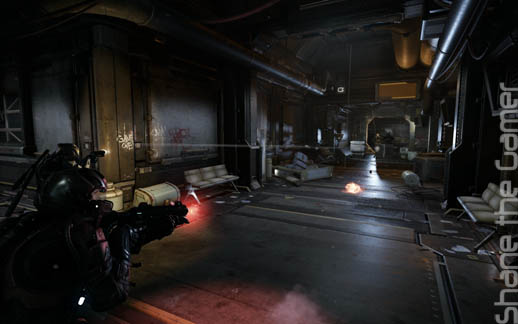 Basically the more you pay (up to US$15,000) the more stuff you get. There’s also an a-la-carte selection of extras with the Arena Commander – the game’s dogfighting module and the only actually pilotable component- available for US$5, hanger upgrades for up to US$50 and extra ships from US$25 to US$250 each.

You can start to see how all that pledge money is being obtained. 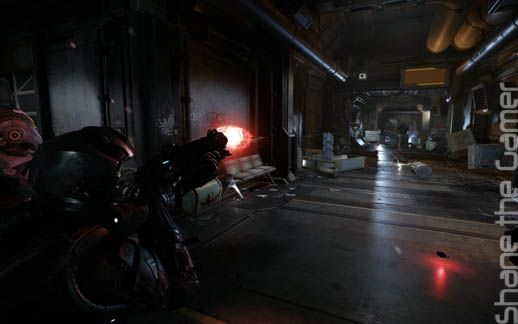 So why are fans parting with this, frankly, exorbitant amount of money?

There’s no doubt that a lot of Star Citizen’s success is down to Chris Roberts’ charismatic showmanship. Born in the north of England this British expat is a charming and enthusiastic speaker with an uncompromising vision for his ultimate game.

It’s certainly a vison that I can identify with and, from all those pledged millions, one shared by hundreds of thousands of others (650,458 others, for the website). 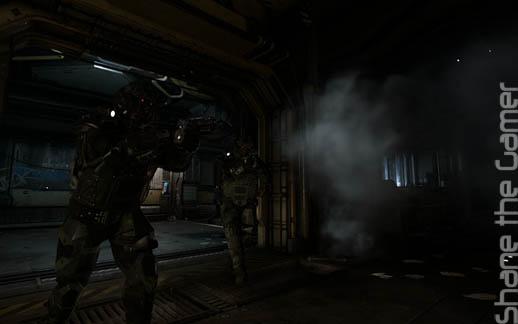 As Roberts started his presentation I got a glimpse into a future where I could play the game that I’ve always dreamt of playing. Where I lived in the future, owned a star-ship and basically did as I pleased.

Like Chris Roberts and a majority of the fans in the audience in the Forum Theatre, I’m a member of the Star Wars generation with fond memories of Elite and, later, the Wing Commander games. Roberts knows that he is not alone in wanting to explore the heavens.

In Star Citizen, Roberts offers fans the opportunity to live that childhood dream. 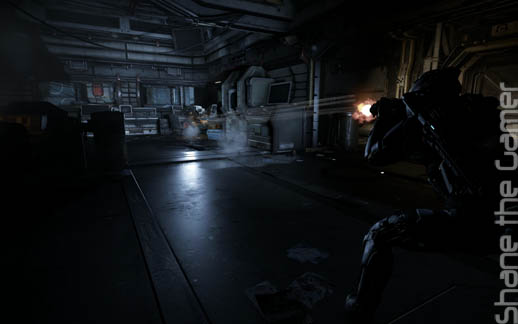 The big news at the Australian Star Citizen presentation was the unveiling of the game’s first-person shooter module. Instead of using the usual FPS tropes the guys at Denver-based IllFonic, the developers charged with getting Star Citizen’s pilots out of their seats, have gone back to basic principles.

Whilst the FPS module is at its heart a straight up shooter, the developers have spent a lot of time on details usually overlooked. As players around, first the just the head moves slightly and then the helmet follows, indicating that the pilot’s head and the helmet are not one thing- just like in real life. 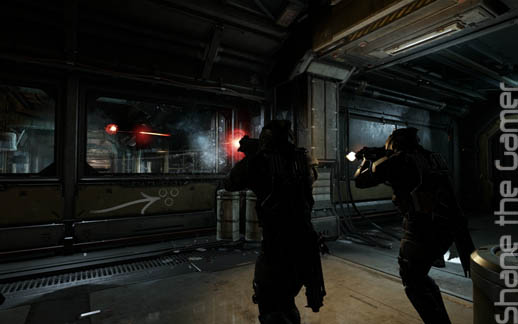 Also, the way the pilot’s breathe mists up the helmet visor ever so slightly when breathing hard during and after a sprint. Very subtle, but very cool.

The demo presentation showed a team of pilots infiltrating a station, disrupting the gravity generator and then engaging in a zero-g firefight. It looked fantastic, and so realistic. The crowd went wild. 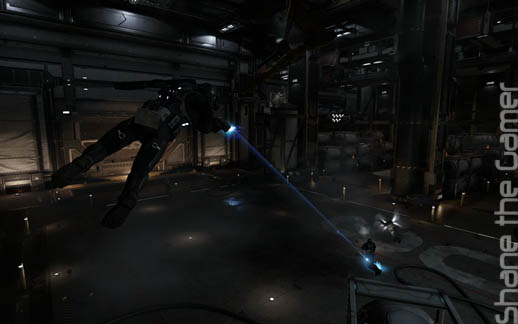 These are the things that Robert’s is marketing for his vison. A true-to-life sci-fi experience with an attention to detail that is second to none. Everything does what is does for a reason, from the control surfaces of the starships to the position of the rifle in the pilots hands. It all has to be just right.

The other not-so-secret of Star Citizen’s success is the way the game’s developer Cloud Imperium Games engages with its fans through events like the one in Melbourne, internet TV Shows like The Next Great Starship- whereby teams design their own starship, with the winning ship featuring in the game – and video podcasts like Around the Verse fleshing out Star Citizen’s universe and the people bringing it to life. 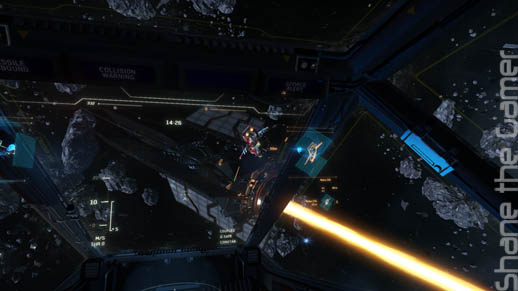 The sense of community is overwhelming and necessary to propel would could be seen as a very niche game genre to such great heights.

How this will all fit together? I have no idea, and I’m not so sure that Roberts’ does either. I remain sceptical with the Star Citizen business model and the way the product is being drip fed to a hungry audience. With the alpha slots taken by early investors and beta still a year away, as much as I’d like to get involved with this game I’m still concerned that it’ll never see the light of day. 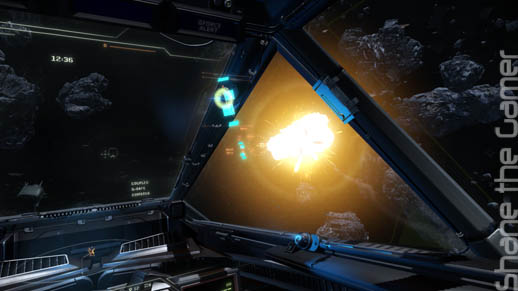 As cynical as I’d like to be about the game’s almost financing model, I don’t think Chris Robert’s is selling snake oil. In fact, I can’t help by being incredibly impressed and have developed a great deal of respect for Roberts and his team and their uncompromising vison for Star Citizen.

They have got a long was to go, but I’m looking forward to following them on their journey to, what I hope is going to be, the release of the sci-fi adventure game that I’ve wanted to play since I was a kid.