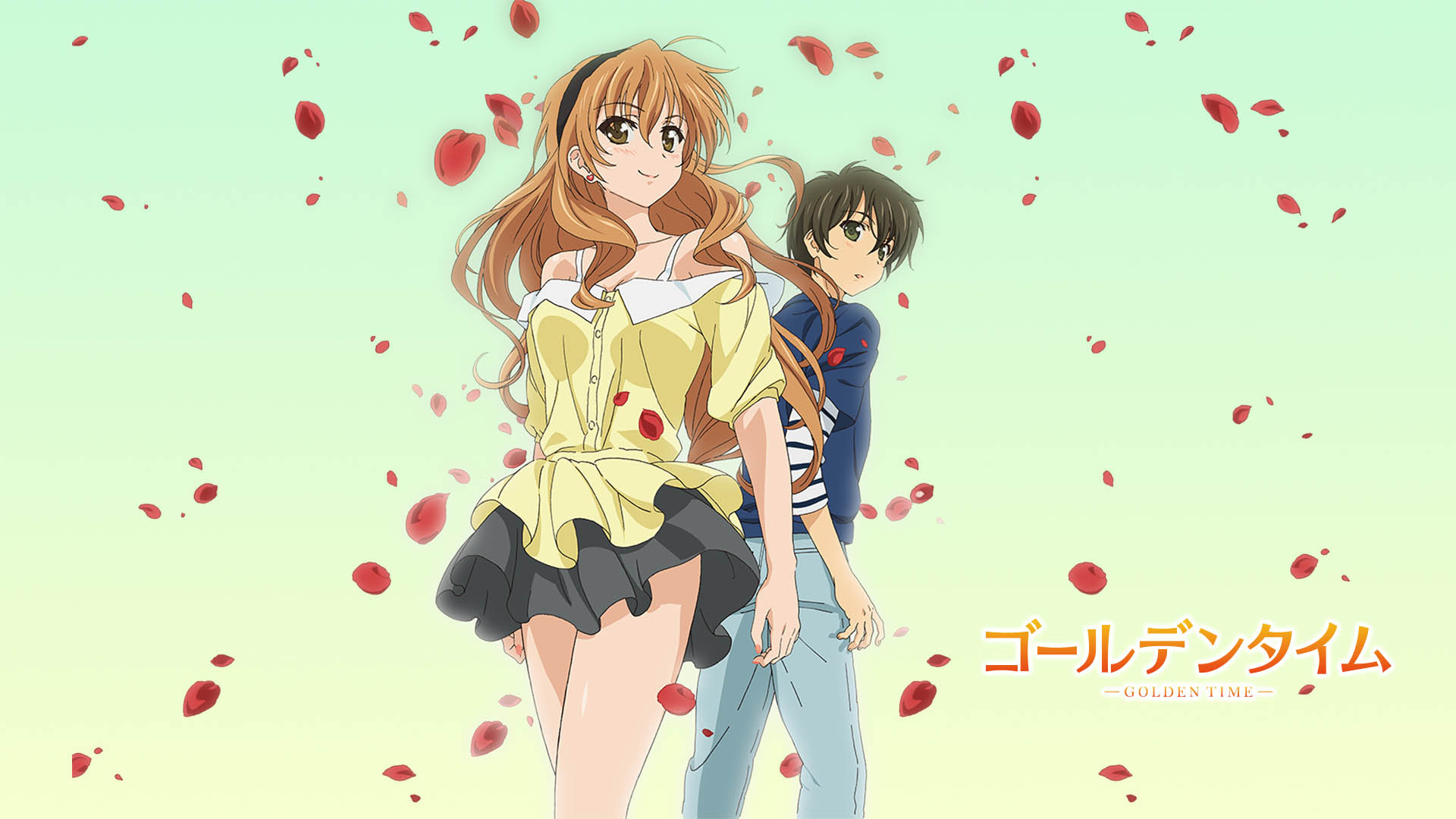 All it takes is one moment in time for everything to change.

Golden Time, an anime produced by J.C. Staff and distributed by Madman Entertainment, is based on a Japanese light novel and manga series depicting themes of love, friendship and the struggles to accept one’s self. Neatly wrapped into a 24 episode long series, Golden Time will tug at your heart strings and one that I personally recommend to all who enjoy a heartfelt and oftentimes laugh out loud funny anime.

Golden Time is not just an anime; it is a journey into the trials and tribulations of the lead character, Tada Banri’s, life. Having been in an accident soon after his high school graduation, Banri suffers from retrograde amnesia, having lost all of his memories prior to the accident.  Now a freshman at a law school in Tokyo, Banri attempts to move forward with his new life while forsaking his past, making new friends and even meeting a new girl who he becomes completely besotted by. But what happens when a significant person from his past returns to his life? 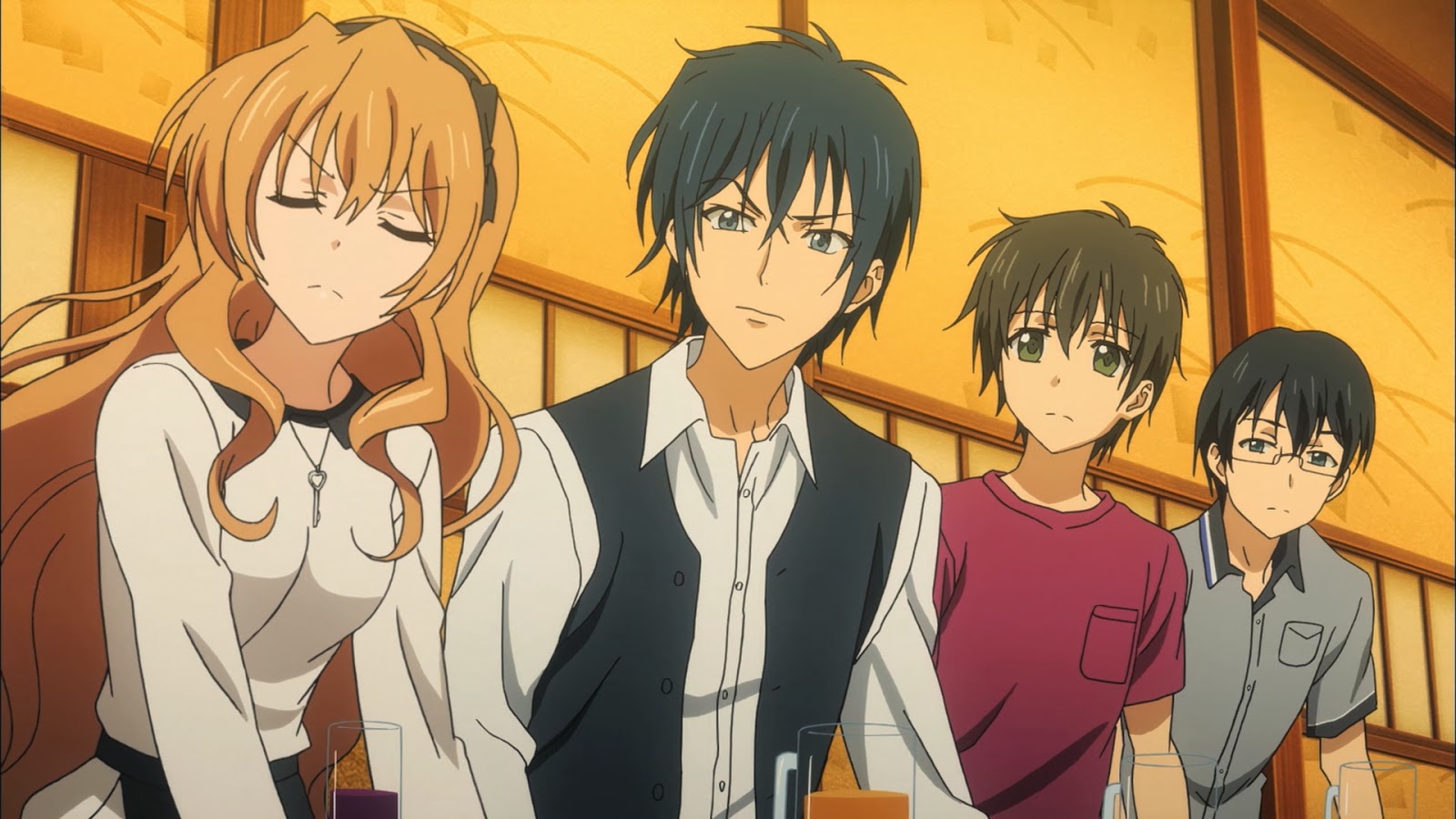 In trying to move forward, Banri meets and befriends Mitsuo Yanagisawa and in doing so, comes face to face with Kaga Koko, a rich, beautiful, selfish, snob of a young woman who we learn is obsessed with Mitsuo, her childhood friend with whom she has never been apart from, insisting that the pair are destined to marry. Being an all-around nice guy, Banri takes it upon himself to help both Mitsuo and Koko by befriending Koko and assisting her in overcoming her obsession and encouraging her to expand her interests into other areas. During the course of the initial week of University, Banri also meets second year student, Linda, who triggers aspects of his former life to return which poses a threat to his budding relationship with Koko.

Golden Time is written beautifully, with a plot that is both emotionally appealing and engaging as it draws viewers in with its comedy, relatable slice of life story, and an almost tragic tale of love and loss. One of the reasons why this anime is uniquely enjoyable is due to the very realistic portrayals of first loves, insecurities, longings, companionship and finding one’s true self. The characters are interesting, each with their own unique identifiable characteristics. Despite being obsessive, clingy and incredibly insecure at times, Koko’s love for Banri is pure and absolute. 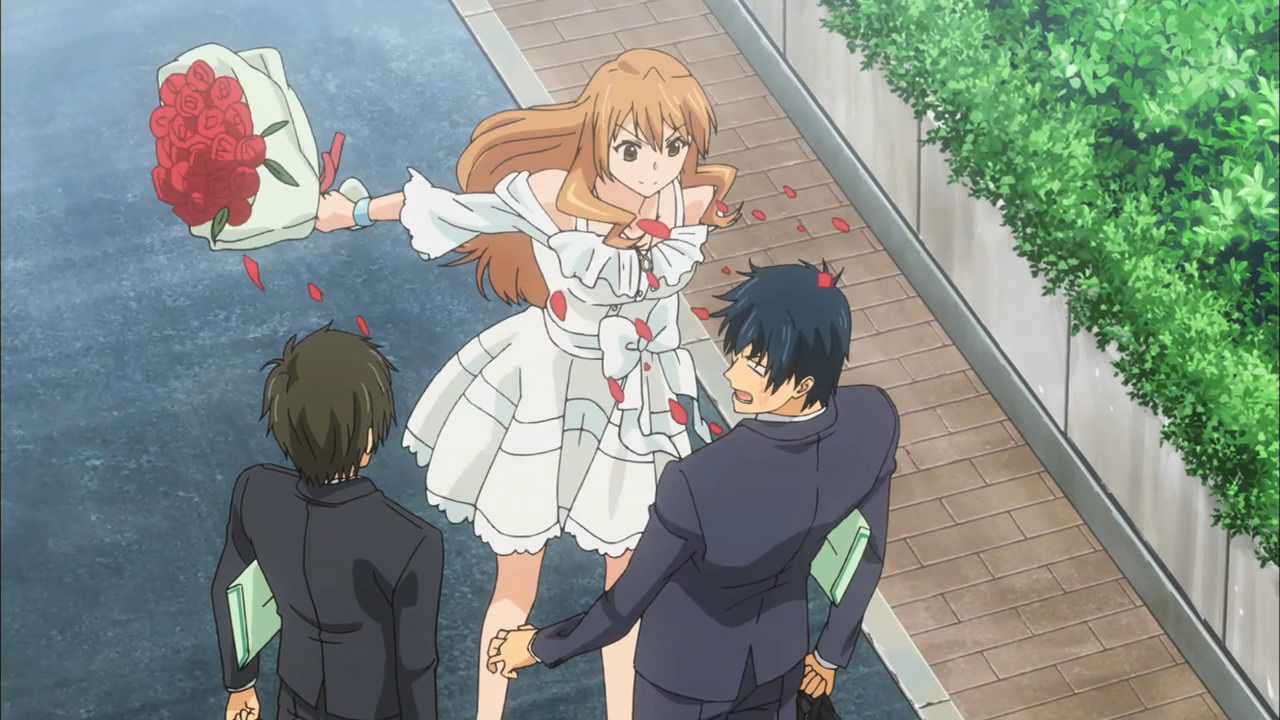 Being as stunning and seemingly well put together, she could have her choice of any man, however, she falls in love and chooses to spend her time with a rather average, less than perfect guy, who just so happens to be the kindest and most understanding person who is able to handle the whirlwind that is Koko. Banri, too, is a character worth paying attention to. Whilst cheerful and carefree on the surface, there appears to be a myriad of deep and rather troubling emotions seeping through, threatening to break him.

Even though there is some semblance of comfort and familiarity with Linda, who appears to be the cool, calm and collected upperclassman, what keeps him sane and secure is Koko and her love. In that sense, the anime portrays what true companionship is and the power of true love. It illustrates the rather well-known fact that one never forgets their first love but that does not mean that the heart is incapable of truly loving another. 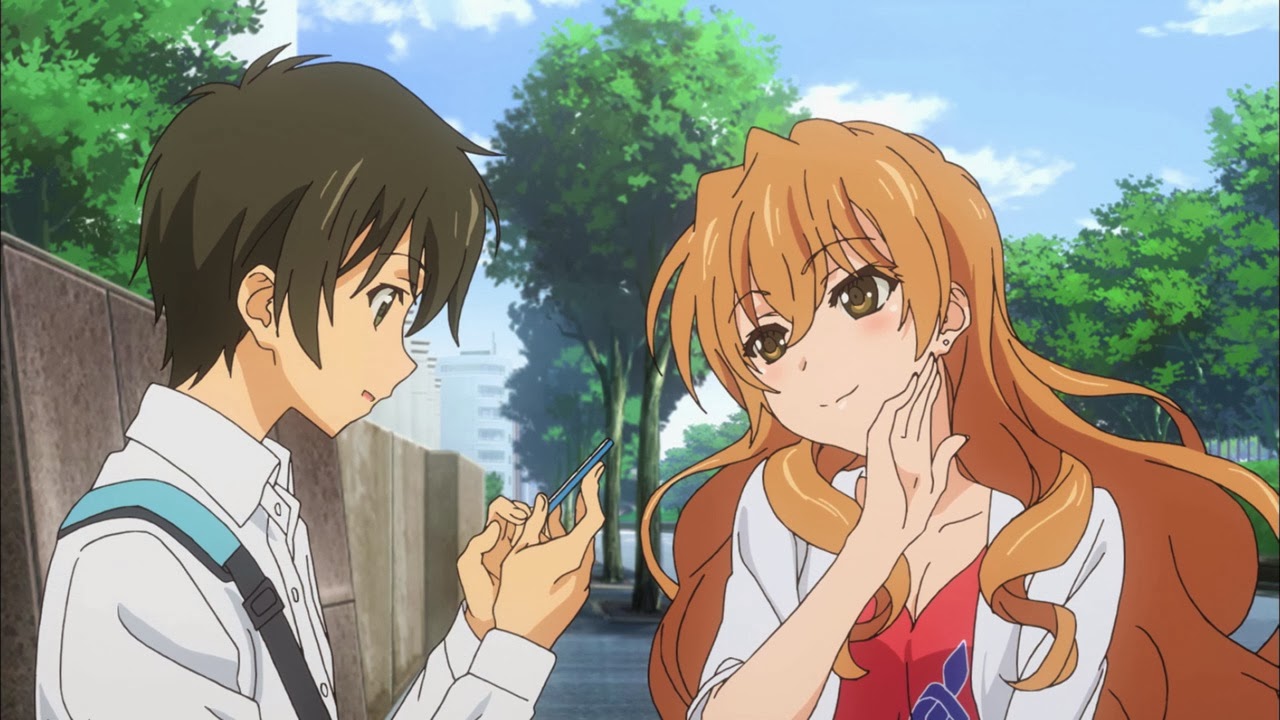 Not only are the characters a delight, the incorporation of some incredibly silly comedic moments make Golden Time an anime to get you smiling and laughing even on the toughest days. Though, as much as there are moments of glee and laughter, there are equal amounts of raw and unbridled emotion as the characters speak about and describe their inner-most feelings of hurt, betrayal and deep-seated pain. As a viewer, you’ll find yourself feeling all kinds of emotions, from joy to sorrow to numbness, when watching this anime. My recommendation would be to just see it through to the end and enjoy the journey along the way.

The art style is one particular aspect that makes Golden Time as visually eye-catching as it is. The illustrations of Tokyo and its inhabitants look fairly realistic for an anime and each character has their own individual style. For example, it is rather obvious why Mitsuo is highly sought after by members of the opposite sex and why Koko is looked upon as an irresistible model. In addition, the use of appropriate and fitting soundtrack carries Golden Time’s plot forward, arousing a more touching and emotive narrative. I have to admit that I find the music used in the opening and closing credits to be particularly catchy too. 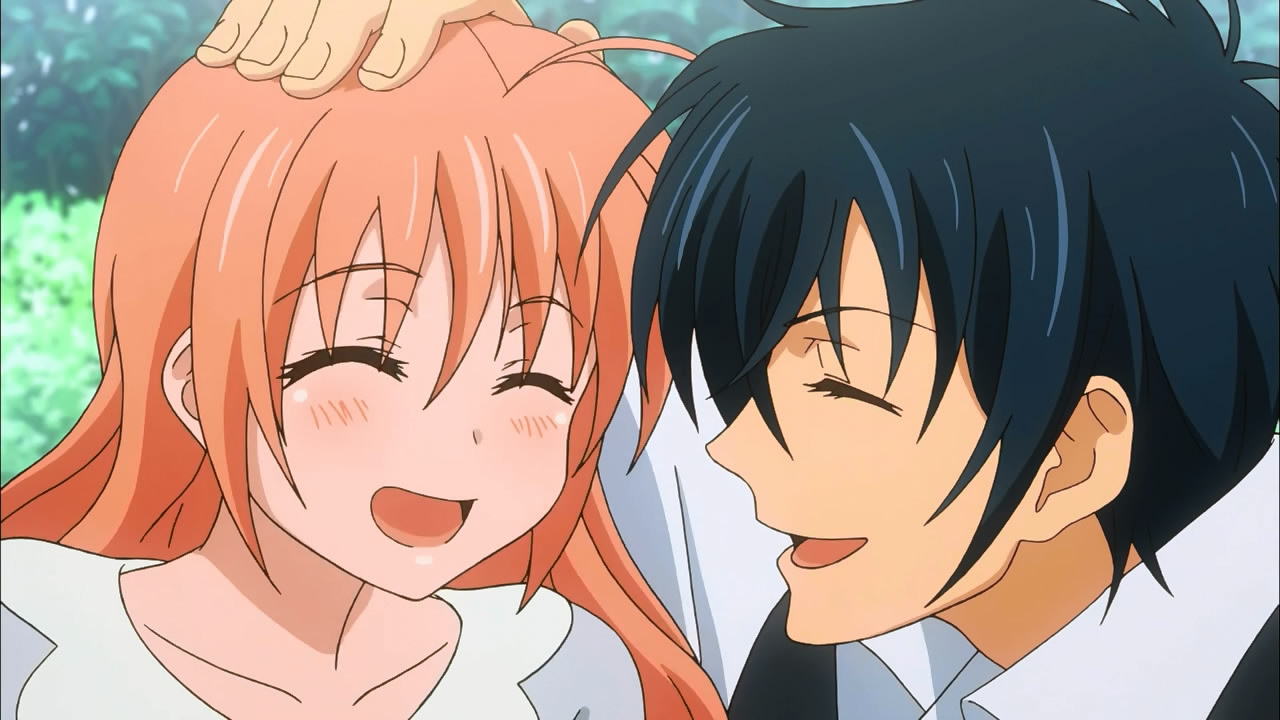 I thoroughly enjoyed each and every episode of Golden Time and found myself relating to both the characters’ personalities and their plights, which only added to my love for this anime series. Despite being a romantic drama, Golden Timehas several jaw dropping moments, twists, turns and intriguing moments that will leave you wanting more. The way in which this anime will force you to ‘feel’ will stir up emotions that you didn’t think you’d feel when watching an anime. It will make you laugh; it will make you cry; and at the end of it all, you’ll come to realise just how precious life, and the people in it, are and that what matters most is being with the person who complements and completes you.