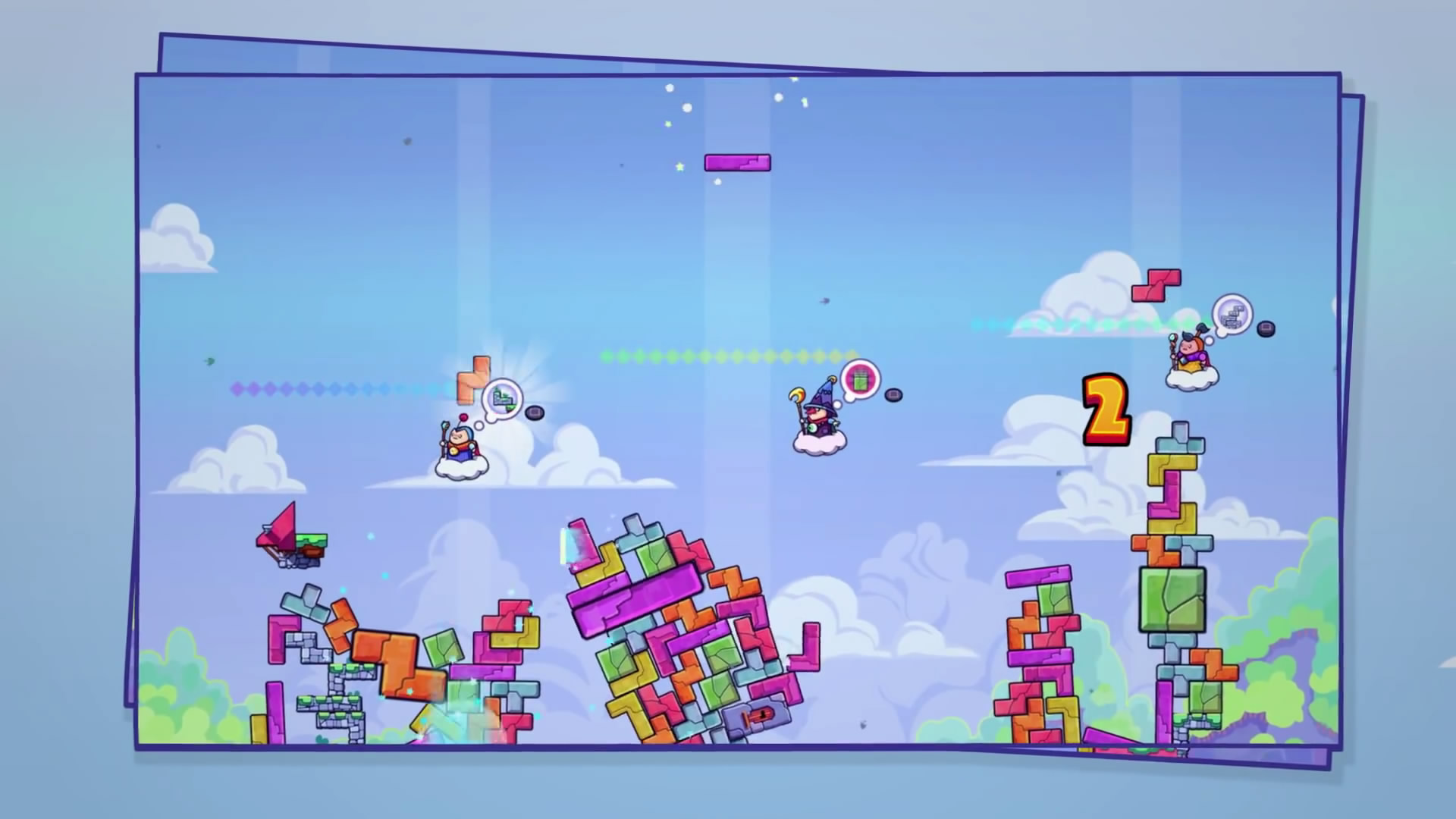 I think we can call agree that the best multiplayer games have nearly ruined friendships. Everyone has had at least one game of monopoly that has caused them to briefly love a significant other significantly less. Here to give me a fun reason to fight with my flatmate, is cartoon-ish puzzler Tricky Towers.

A fundamentally multiplayer experience, Tricky Towers can be played between 1-4 players, locally or online and while it may look functionally similar to Tetris, interesting gameplay tweaks give it a fresh and occasionally frustrating twist. The games primary ‘Race’ Mode, challenges you to build your tower to a certain height before your competitors, which seems simple enough until you factor in the games clever mechanics. 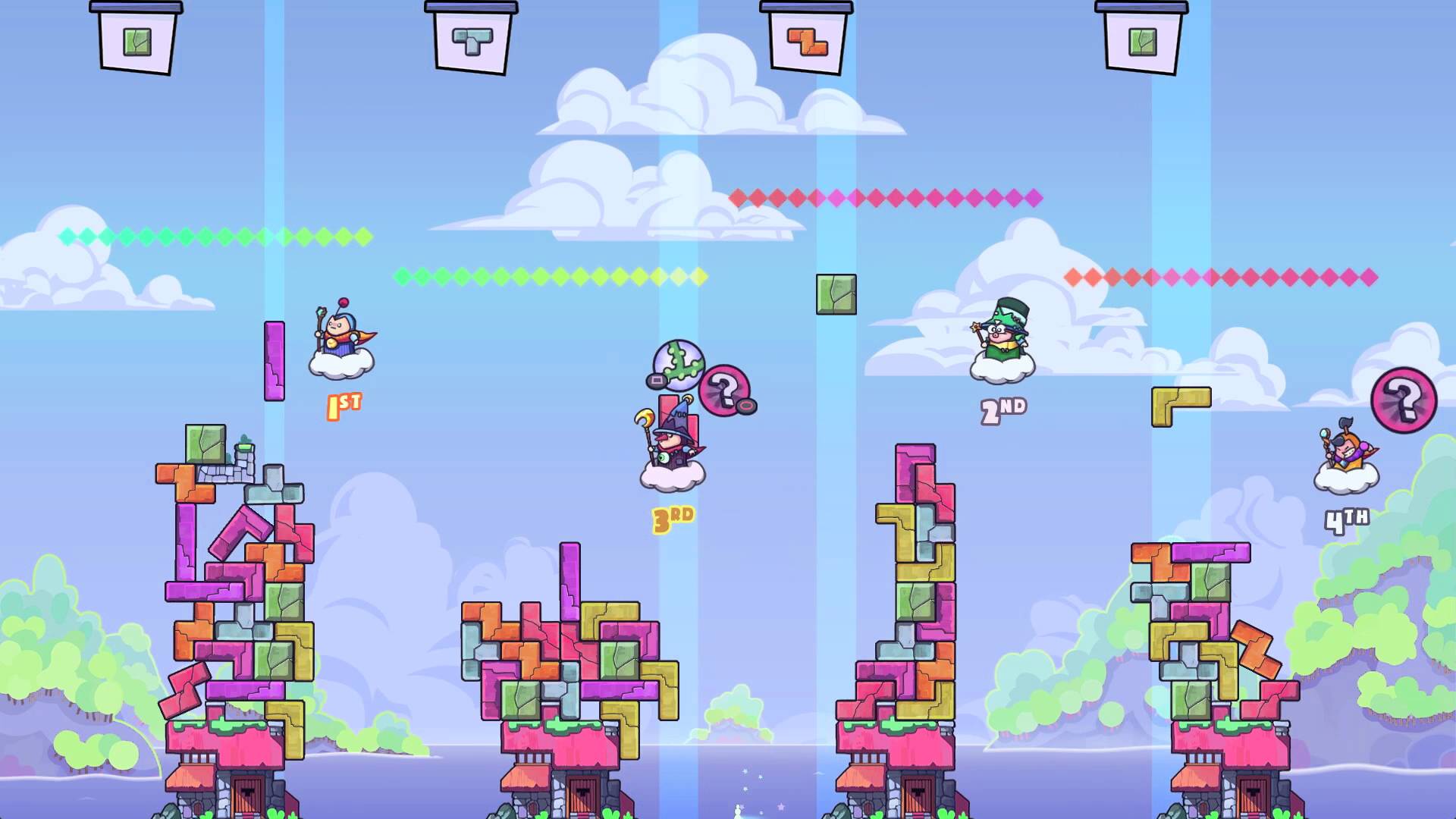 Firstly, more freedom is granted to the player in that their tower is not locked in space, and each block has weight and balance, instead of naturally adhering to each other as in classic Tetris. This means you have the option of frantically stacking mismatched pieces atop each other to race to precarious victory or take it slowly attempting to build a solid foundation.

The second addition is what gives the game multiplayer depth, each player has the ability to interfere with their opponents tower or improve their own with “light and dark magic”, controlled through dedicated buttons. These abilities are dished out periodically through each match are what set the game apart from being considered a Tetris clone. You might choose to use your light magic to bind several blocks together to ensure a crucial part of your tower remains stable, or use your dark magic to super size one of your opponents blocks to smash their careful construction (The latter obviously being the most fun). 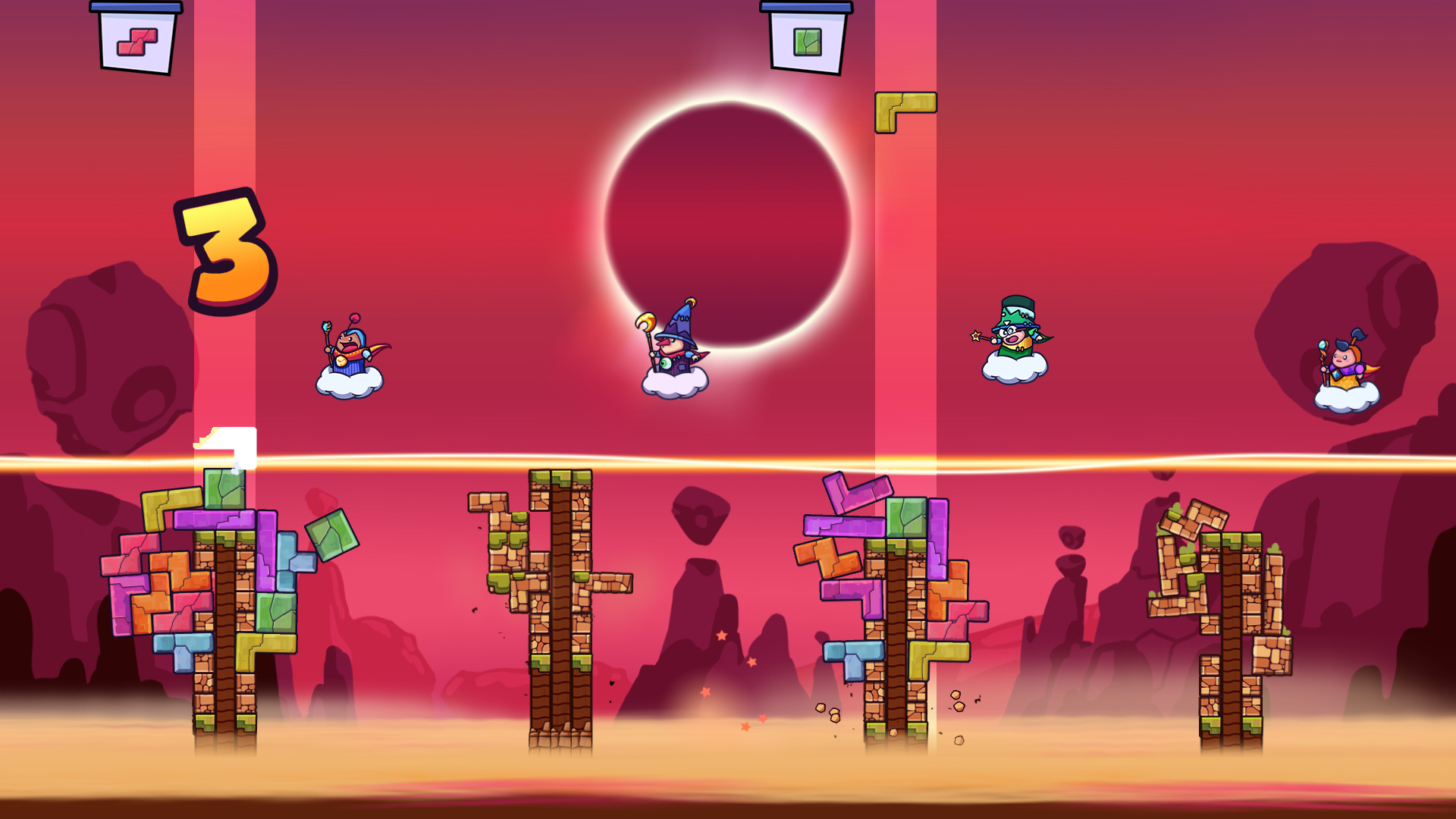 A clever addition from the developers is that your tower must remain standing for at least 3 seconds before victory is declared. The most fun I had with Tricky towers was yelling at the TV as my tower barely held its shape together for the countdown. There are additional modes available, such as ‘Survivor’ in which you have to try and build tower without dropping over a certain number of blocks, or ‘Puzzle” in which you have to try and fit together a predetermined set of blocks correctly without dropping any. Survivor mode can be it’s own special breed of fun, tentatively placing your last block whilst on your last life gives the same sort of tense enjoyment as nudging your last Jenga piece from your tower. Puzzle mode feels the weakest of the three as it is the least forgiving and inherently the least diverse in gameplay options, but is still worth checking out, if only to take a break from the frantic energy of Race mode.

The game comes with single player options, giving players a chance to experience all these mechanics on their own. The heart of this mode is a long series of specific ‘Trials’, ranging from fairly easy to punishingly difficult. While they provide a method for a player to hone their skills, this seems to me to be a game that was always geared towards group enjoyment and I felt little compulsion to spend a lot of time playing solo. 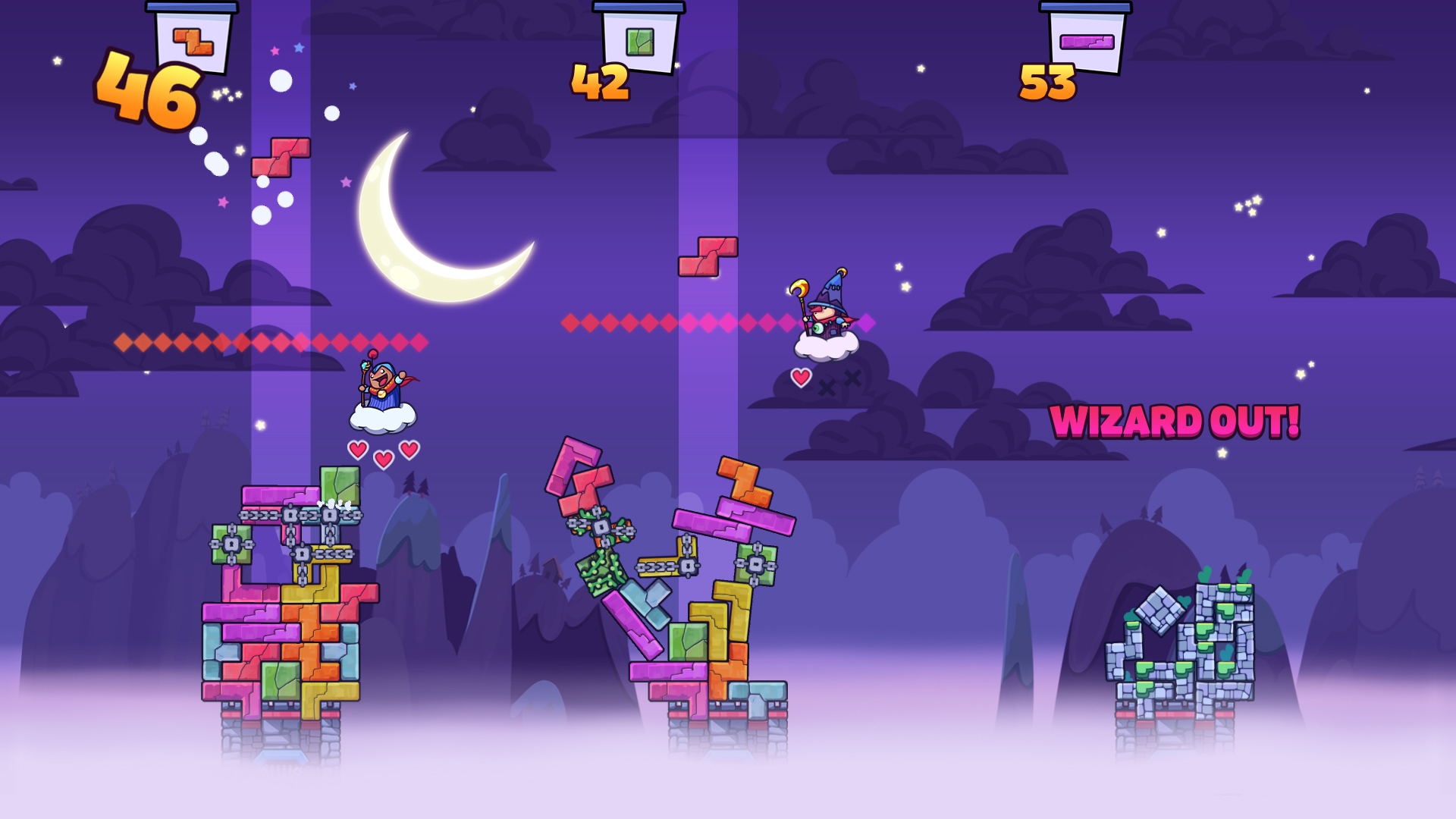 ‘Race’ mode played locally with friends is where the game truly shines. The base familiarity of it’s premise combined with the ease of it’s controls combines for a perfect pick and play competitive experience that calls to mind games such as Towerfall ascension and Nidhogg.

Unfortunately it must be said that the added freedoms to the player can be a hindrance as well as a help, the added physics of the blocks are not always dependable. A block that seems a perfectly solid foundation may crumble and destabilize your whole tower; this is combined with luck playing a particularly prevalent role in gameplay. Fortune is a natural element in any game, when your opponent is given a stream of perfect blocks and you end up with a hot jagged mess, long stints of gameplay can grow frustrating.

However these issues don’t detract overly from what is a creative and effortlessly enjoyable update on a classic game. In an age where games are rightly being taken seriously as art, Tricky Towers is a gleeful reminder of gaming’s great history. From its inspiration; to its accessibility; to its focus on enjoyment with friends, this is a game that will give you a nostalgic tingle.