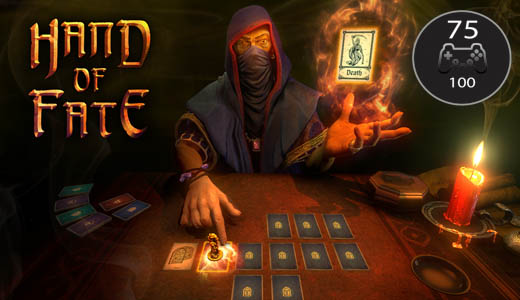 The small time studio Defiant Development have placed their cards on the table with their new game Hand of Fate. They describe their creation as a “hybrid rogue like/action-RPG/deck builder” and it is available on Xbox One, PlayStation 4 and PC.

This RPG takes a more old fashioned and traditional approach that returns more to the roots of role-playing.

Despite being mainly a deck builder there are a reasonable amount of elements to Hand of Fate. There are two modes, story mode and endless mode.

I’d like to think both are reasonably self-explanatory but just in case not, story mode has you slowly working your way through numerous boss or champion cards that increase in difficulty as you progress. There are a total 12 champion cards on offer and playing through them also allows players to gain new cards and increase deck capacity. 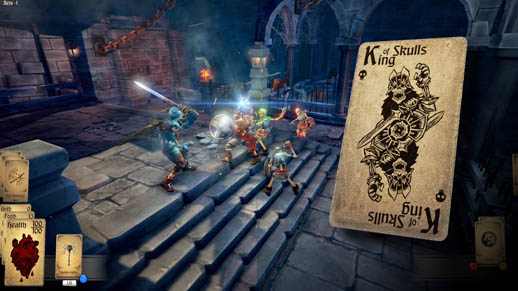 New cards are specifically unlocked by completing encounters that hold a token as a reward for completion. Completion of card doesn’t necessarily involve landing on the card but filling specific circumstances for it.

So you may land on it but still fail to gain the token attached to it. You can however always reattempt the card if you so happen to come across it in your next game.  So there is plenty to experience. 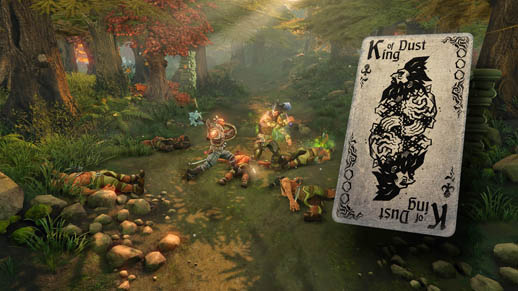 After obtaining new cards, deck building is a fairly big component and there are two card types to take into consideration when building a full set.

Equipment cards are as they sound as they contain all manner of equipment, items, armour and weaponry. All of which can be swapped in and out as new cards are attained. The encounter sub-deck is obviously the one that has all the encounter cards that you will randomly experience during a game.

The layout and UI is easy to use and navigate and makes the building a deck a simple but enjoyable process. 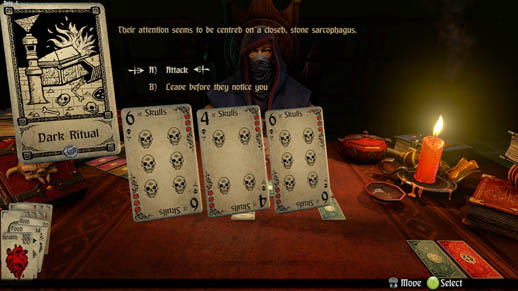 The dealer arbitrarily places event cards on the table face down and then with your character figurine, you proceed from card to card to reveal the hand dealt. Paths vary and can involve numerous directions but you are free to retrace your steps and visit cards on a different path.

There is usually a set of three hands dealt before you reach the dealers champion card and hopefully you managed a safe trip. 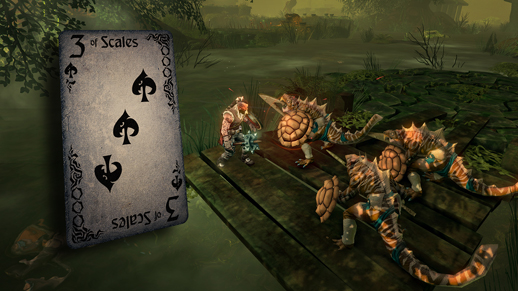 The second mode on offer is Endless mode.

It is unlocked only after completing a few champion cards. I still recommend only attempting this one after further investment into the Story mode. Not only is Endless mode some degree harder, having a good understanding of the game is definitely to your advantage.

You either win big or lose big as I rarely found there to be a middle ground. The deck building component is a bit different here as it does seem to utilise the last deck you created in story, but the dealer also includes numerous new event cards you may not have unlocked just yet. 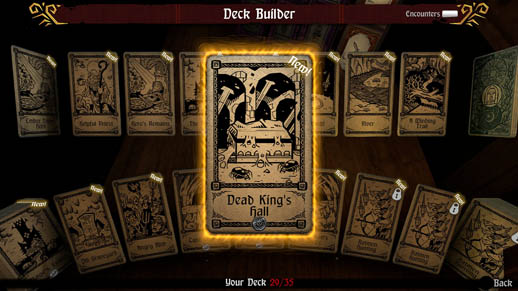 Cards can initiate a fair number of things. They can be battle events, traveling tinkers, fair maidens and all other manner of strange encounters.

Most events offer a decision as what to say or do. These particular encounters are usually resolved with four chance cards that vary in probability. The cards are shown to you, flipped over and then shuffled.

In most cases you can follow the card you are after but not always and then it really is up to fate whether you succeed or hopeless fail in your venture. 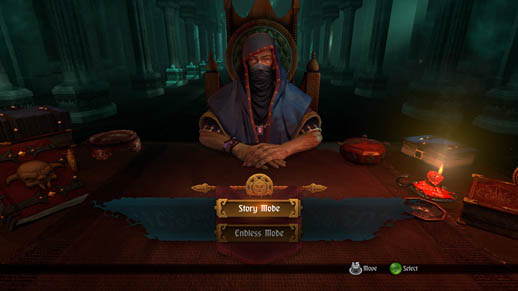 When a combat encounter arises your character goes into various mini battle arenas that range from small sections of forest to actual arenas. There are a few of these mini arenas and they do have a claustrophobic feel being so small.

Within these areas you fight from a third person perspective and utilise whatever armour, weapons and equipment cards you may have in play.

You may be battling the champion or several other opponents that the dealer pulls from the deck. I really liked the idea of being taken to an actual combat situation and it definitely breaks up the gameplay but the combat itself is done poorly. 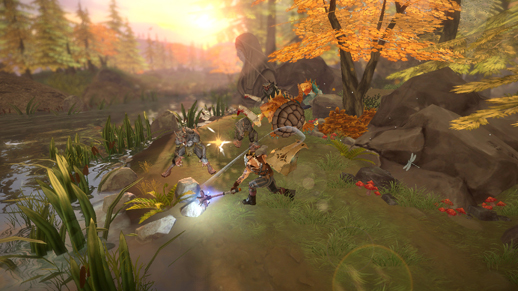 Combat is clunky and unresponsive at times leaving a hesitant feeling the next time a battle situation arises. It’s clumsy at best with slow reactions and frame rate issues that can impede fighting.

Defeating enemies is more a bashing frenzy with little emphasis on dodging or blocking, while it is available the unresponsiveness makes it difficult to adequately utilise.

There are different weapons to use, shields for defence and opportunities to counter but all of these aren’t exactly implemented to the standard I would have liked to see. Some items and weapons do offer a more fun advantage and variation in battle but these occasions are few and don’t quite make up for the rest. 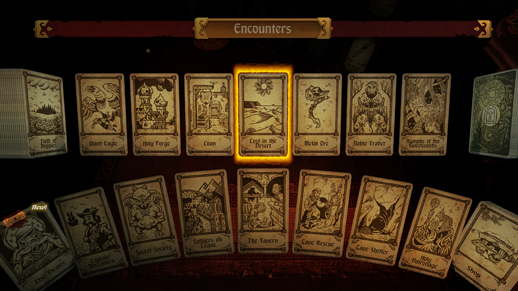 The game has a few other performance issues. The dealer likes to float cards all over the place and the game simply doesn’t seem like it can handle such flare, with a very noticeable drop in frame rate for this alone. Other instances the game seem jumpy and as far from smooth as a pineapple.

I will say I played the Xbox One version of this game and so I hope that these issues may only be console specific so those on other platforms might still be able to enjoy a smoother experience. 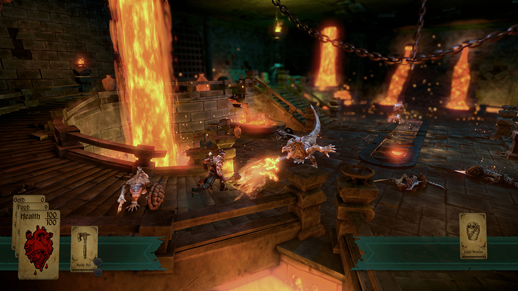 Graphically the game is of a decent standard with the art style being enjoyable but a little lacking in detail. The music does a great job of creating a hapless mood but it does come to be repetitive.

The voice and voice acting of the dealer is good and does create and ominous vibe but he more so makes comment and doesn’t read out story or event happenings.

I did enjoy the random events and storytelling. It has a nice D&D feel to it although once again all events need to be read and so sooner or later you’ll begin skipping the text and losing all interest in details of what is actually occurring. 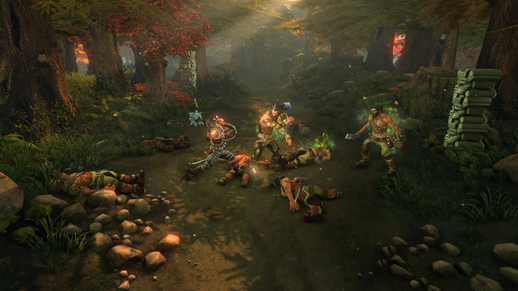 To say the game is unplayable would be a lie, the glitches and drop in frame rate can be a hindrance but the essence of the game is one of unique adventuring and can offer plenty hours of fun.

I will say when things go bad (either performance or bad luck) I did find myself rage quitting but that didn’t deter me from trying my luck with the cards once more.

For a more traditional feeling RPG this one can supply you with both an adventure and challenging experience.