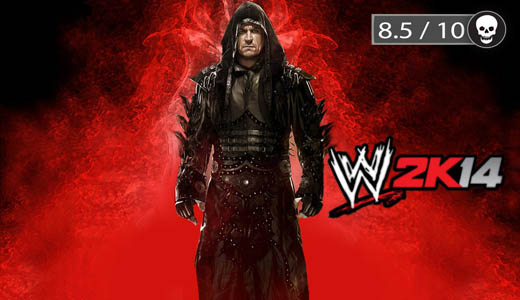 I’ve said it once, and I’ll say it again: no one knows or cares more about the WWE gaming franchise more than me. Every year, I put a great deal of energy into judging these games, and I take it as a personal affront when they fail to live up to my expectations.

Luckily, no such injustice occurred this year. And as the first WWE outing with 2K at the helm, I had high hopes for WWE 2k14 to be The Best In The World. Because, like all sports games, it’s really the developers duty to provide the most recent, up-to-date true recreation of the product as it stands now. But given the unique nature of wrestling (i.e. it’s a entirely staged, pretend spectacle) there have always been a number of challenges when it comes to presenting it as it appears on Monday Night Raw. 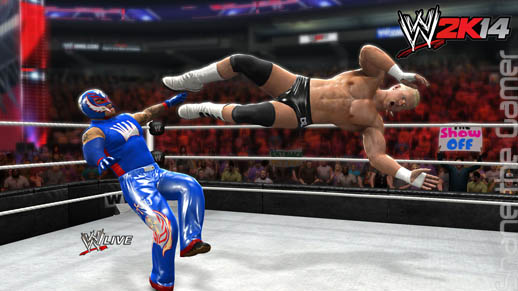 2K has blitzed passed this and made a number of small but significant changes to the way wrestling matches in WWE 2K14 are played – essentially removing or fixing all the small, niggly problems that existed in last years version.

Chain grapples are no longer absurdly easy to reverse, to the point of being useless, and chain grappling sequences will end after one reversal, as opposed to being an endless sequence of back-and-forths. Running strikes and grapples have finally been reduced in power, by adding a half-second ‘starting to run’ animation, which means that you can no longer just spam these quick attacks. Punch combo and grapple animations are also much quicker, giving a fairer representation of the speed with which an actual WWE match takes place. 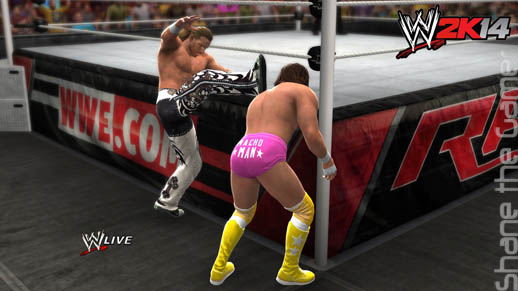 Combine this with a bunch of new moves (namely newer catch finishers and some great new OMG moments), and you’ve got the most satisfying match gameplay of any WWE game ever.  On top of that, the game looks incredible. Arenas, wrestlers and their moves are depicted with incredible accuracy to the real thing, especially ones that have obviously been recaptured specifically for this year’s edition.

Which of course, would go to waste, if there wasn’t a reason to play the game.

After last year’s main story mode in WWE ’13, which saw the player relive the defining moments of wrestling’s heyday, the Attitude Era, 2K had an unenviable challenge in creating an even better one-player experience. To do this, they created the ’30 Years of Wrestlemania Mode’, in which players recreate the best one (or, in same cases, 2 or 3) matches from each of the 29 Wrestlemania events over the last 29 years. This is a great offering for wrestling fans and gamers of all ages, as it lets you play as the best wrestlers the WWE has had on offer through practically their entire existence, recreating the most memorable matches through a combination of gameplay with specific ‘historical objectives’ (for example, bodyslamming Andre the Giant as Hulk Hogan in their classic encounter) and quick-time events. 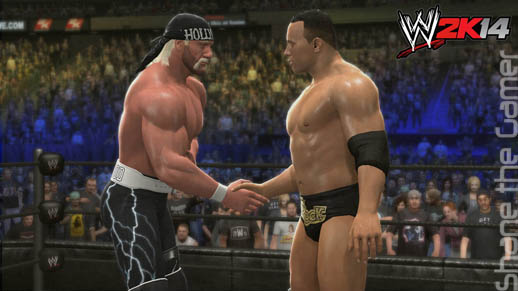 This mode should appeal to damn near every wrestling fan, because every wrestling fan has a favourite wrestling match, and it’s almost a certainty it’ll be on there. As always, I’m constantly impressed by the fact that the development team for these games are clearly wrestling fans themselves, as indicated by the high level of detail in recreating entrances, outfits and matches through this mode, down to the scripts read by Jim Ross and Jerry Lawler – pulled directly from the matches, even if these two weren’t calling them. And while this attention to detail slips with some of the matches over the last 5 years, It would have been awesome to see a digital version of The Undertaker’s Wrestlemania 29 entrance, but for the most part, it’s very difficult to fault them.

The additional perk of having this mode is that it requires the game to have the biggest, best roster of any WWE game ever. Legends and favourites from the duration of the WWE’s existence make an appearance here – Eddie Guerrero, Andre the Giant, Hulk Hogan – mixed with some more modern faces making their first appearance in a WWE game, like the members of The Shield, Ryback, which makes for the most well-rounded, complete roster ever. 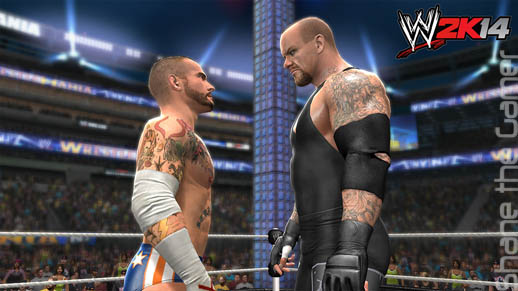 Care has been taken to make sure these guys aren’t just clones too – with new animations to insure their move sets look genuine and true to their performers.

But, by far and away, the best addition to the world of WWE games is the new ‘The Streak’ mode, based around The Undertaker’s legendary undefeated Wrestlemania streak. This mode has two game types: Defend the Streak and Beat The Streak.

The Defense is easy enough; play as ‘Taker against waves of opponents, one after the other, until you either get pinned or defeat the entire roster. This is pretty easy, and a lot of fun.

What’s even more fun, and probably the best part of the game, is trying to break the streak. I am a seasoned veteran of these games, and the only thing that can challenge my skills is another human player. However, I can legitimately say, beating The Undertaker on streak mode is the most challenging, entertaining and fairest representation of WWE ever. The Undertaker is damn near unbeatable on the grandest stage of them all, and if you want to take him down, you’re going to have to work for it. 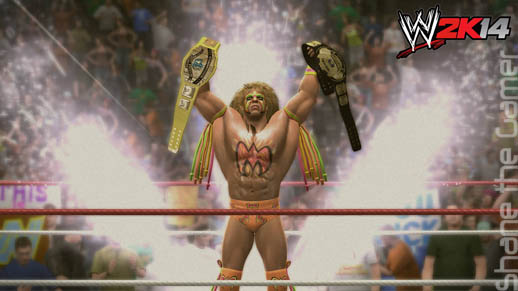 Just when you think you’ve put the Dead Man down, maybe the lights will die and he’ll just appear behind you, grabbing you into a Tombstone Piledriver. Maybe you’ll hit him with a finisher, only to get grappled into the Hell’s Gate submission hold as you attempt a pinfall. This game mode is truly exciting, and you’ll sit there, waiting on every close 2 and a ¾ count, hoping for the win, just like at Wrestlemania.

At the end of the day, chances are you won’t bother with this game unless you’re a wrestling fan. If you are a fan, you should go and buy this game now, because (just like The Miz) it’s awesome. If you’re not a fan, but wouldn’t mind becoming one, this is a hell of a place to start. And if you’re not down with that, I got two words for ya.