We Built This City… The SimCity Legacy: Past, Present and Future – Preview 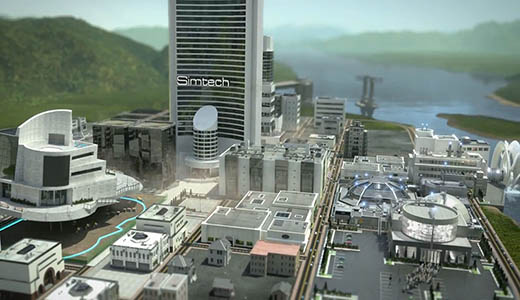 At the end of last year I got to spend some time playing EA’s upcoming SimCity reboot. With the game’s release date looming, I thought I’d take a look back at the franchise that defined city-building games and report on my experience with the new SimCity game.

The SimCity franchise is almost as old as PC gaming, itself, the first game appearing way back in 1989. Whilst the top-down view of the city blocks wasn’t that visually appealing, the sophisticated simulation mechanics under the hood made for a challenging and rewarding game.

For fledgling developer, Maxis, the game was an overnight success. 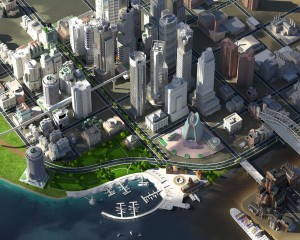 were a variety of other sim games including the likes of Sim Earth, Sim Ant and Sim Copter. Whilst some of them garnered favourable receptions, none of these other Sim games managed to capture the audience in the same way that the original SimCity did.

In 1994 SimCity 2000 was released; the flat looking cities of old replaced by a new faux-3D isometric view offering players even greater visual feedback on their city management strategies. Five years later SimCity 3000 was released, again with a graphical overhaul reflecting the advancement in graphics card technology.

2000 saw the release of The Sims, effectively a spin-off of the SimCity franchise revolving around the daily lives of the citizens of SimCity. The Sims and its sequels have gone on to be the most successful video games in history. 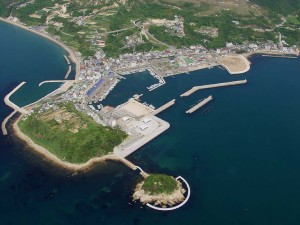 It was 2003’s SimCity 4 that would push the franchise into the 21st Century.  The game was the first SimCity to arrive after the launch of The Sims. SimCity 4’s graphics were scrubbed up to a point that players could see the Sims going about their business. The MySims mode allowed players to create their own family or import their Sims from The Sims game and move them into their SimCity 4 city.

The simulation engine of SimCity 4 differed from its predecessors resulting in some complaints from long term fans of the franchise. Tried and tested city building strategies that players had used in previous iterations of the game wouldn’t necessarily yield the expected result in SimCity 4. 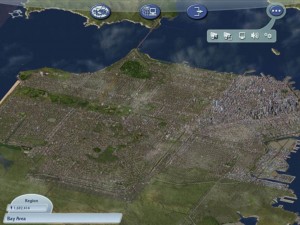 from the game’s inner works and the inevitable graphical polish, SimCity 4 also introduced the concept of playing with regions. Instead of cities existing in isolation, they were situated within a region and surrounded by other areas into which more cities could be founded. The cities where also able to interact with each other, creating cross border economies that allowed a city to specialise in agriculture, commerce or act as a dormitory town supplying workers for surrounding cities. I even created a city that was no more than a transport link, funded by tolls.

In order to create links with other cities roads, trains and water pipes had to be built up to the city boundaries. Starting a city on an adjacent region tile enabled the various connections to be continued into the new city.

With a region big enough to accommodate almost 100 cities, SimCity 4 is a game that I’ve been unable to stop playing for almost ten years. There is no other game in my library that I’ve kept on coming back to for so many years.

In 2007, with the non-Maxis produced SimCity Societies, the franchise took a fall as EA unleashed a SimCity game that was less about the city and more about the people living in it. In cosying up to fans of The Sims EA alienated the PC city-builders with a game that many felt was too easy and dumbed-down. 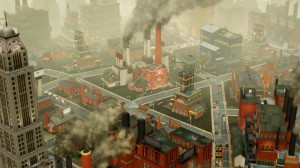 Without a proper, modern SimCity game many city-building fans, myself included, looked elsewhere; finding solace in another city building franchise, CitiesXL.Originally developed and published by the now defunct Monte Cristo, Cities XL appeared to be the game that SimCity should have evolved into. With 3D graphics and the ability to build curved road and create irregular zones players could craft unique city layout with far more sophistication than SimCity 4 afforded.

But the CitiesXL experience wasn’t without its own dramas. The first version of CitiesXL featured an ill-conceived subscription-based, persistent online multiplayer game that proved so unpopular that it was shut down within a year. Poor sales of the game forced publishers Monte Cristo out of business and the franchise was acquired by Focus Home Entertainment.

Under Focus’s stewardship CitiesXL has been updated a number of times, with yearly releases adding buildings and offering gameplay tweaks and bug fixes. But even the latest release CitiesXL Platinum, which came out earlier this month, is still essentially the same game that killed off Monte Cristo. It uses the same engine and has the same tendency, for some players, to grind to a halt as cities grow. 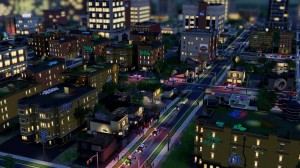 its faults, the likes of CitiesXL Platinum offers players an innovative alternative to the SimCity franchise. Whilst the upcoming SimCity may retake the city-building crown, I’m pretty convinced that, at the very least, CitiesXLoffered Maxis some inspiration for their new game.

After almost a decade without a decent entry, EA’s SimCity is poised to take the city-building genre to new heights when it comes out next month. At the end of last year I attended the EA Asia-Pacific Showcase event in Sydney. At the show I got to sit down and play a preview build of the new SimCity.

The first thing I noticed, being fresh off SimCity 4, was just how nice the game looked.

SimCity utilises an interesting depth of field trick, known in photography circles as “tilt-shift”. By blurring the foreground and the background, leaving only the area of interest in focus, the world of SimCity looks like a tiny little model. It’s very cool-looking.  During the preview it was very easy for me to zoom right in and get lost in the daily life of my citizens as they went about their business. The game is incredibly detailed; even when viewing the city from afar out, I could still see cars whizzing along the roads. It is, without a doubt, the best looking city-builder ever made.

Under the hood, the specially developed Glass Box Engine creates the networks that power the simulation, which in turn power the city. SimCity uses the road network as a conduit for the city’s utility services. 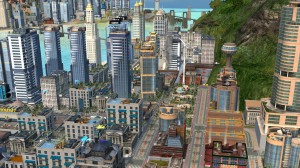 Unlike in SimCity 4, there’s no need to lay separate water pipes or electricity pylons. As long as the city is connected by roads the water, electricity, poop and garbage can all freely flow where they need to go. At first I saw this as a bit of a simplification (something that I’ll get into a bit later), but really it removes a bit of micromanagement that needn’t have existed.

The program is still simulating the city’s wants and needs, but with the player concentrating on the production and disposal rather than the route that it takes. The diagrammatic depiction of sewage flowing along the road network was a bit cartoonish, but the whole style of the game is a little cleaner and commercially friendly than the clunky, more serious-looking SimCity games of the past.I can see some player getting a bit hung up on this; but it is just different, that’s all.

Using the slickly designed interface I was intuitively able to perform familiar SimCity-style tasks, such as zoning land and building roads, with ease. Instead of using 2D maps, the Glass Box Engine provides data visually by removing the textures from superfluous parts of the city, overlaying the requested data on the actual city itself.Again, it is all very clean and an easy to read way of displaying what, in the past, has been complex and messy maps full of coloured data. 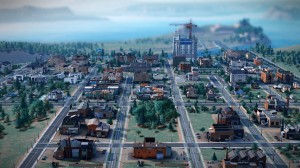 New for this rebooted SimCity is the ability to visually micro-manage city services. Whereas previously the service ranges of, say, a fire station could be increased by moving a funding slider; in this SimCity players can physically bolt on another garage or a heliport to improve the service. Innovative, but again moving away from the more functional aesthetic of the previous games, which I can see hardcore fans having difficulty coming to terms with.

The city area in the preview, which was really no more than a tutorial, did seem a little small; coming across more like SimTown than SimCity. That being said, the whole experience seemed a little more intimate than other city-builders. I found myself zoomed right into neighbourhoods, examining what was happening at a micro-level rather than wanting to build the biggest cookie-cutter city I could. Again there will be others that are not interested in this; well you’ve still got CitiesXL.Personally I like the idea of building a small, but lovely-looking town and see what happens; maybe it’ll grow into something else and maybe it won’t.

Throughout my preview,SimCity looked superb; with the controls, menus and options all very intuitive and fluid. But it was difficult to get a feel for the actual depth of play. Some of the menus hinted of what we were going to get, with greyed out upgrades sitting there waiting for the game’s release. I’d like to think we are still going to get the depth of simulation that we’ve enjoyed in the past. I do, however, see this as a reboot and not an upgrade. 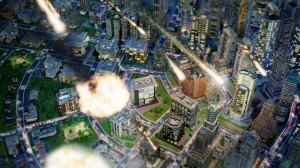 SimCity for the 21st Century. Yes, it does have a whiff of The Sims about it, but why not? Why shouldn’t Maxis look for something fresh rather than just polish up the crusty twenty-year-old gameplay just because fans are familiar with it? As long as it is done right, that is. And I’m fairly confident that they have done just that.

I don’t doubt for one minute that the release of SimCity will be full of armchair planners, architects and engineers all crying foul in EA’s direction- just as they did with SimCity 4. As an engineer, myself, I understand the desire for an authentic simulation. But what’s more important, and I think this is the view that Maxis have taken, is that firstly and foremost SimCity is a game; and thus it must be entertaining.

I walked away from the preview thoroughly impressed with the game’s presentation and the crisp and clear art style. It’s not going to be everyone’s cup of tea, but it could finally be the modern city-building game that we’ve been waiting for. SimCity is out for Windows PC on the 7th of March 2013 in Australia and 8th of March 2013 in New Zealand.