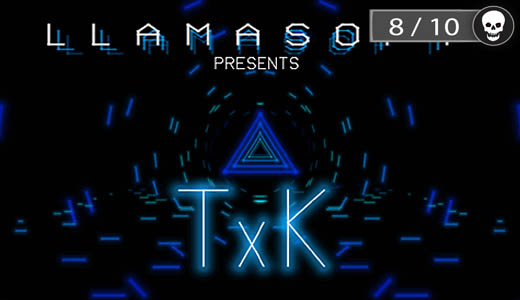 The 80’s aesthetic of gaming is in the middle of a renaissance at the moment, with 8-bit artwork and chip-tunes audio at the forefront. Now Llamasoft, a company that originates from the 80s scene, offers a new spin on the retro circuit with TxK, an arcade shooter for the PlayStation Vita.

Packed with challenging levels around every level and beautiful neon explosions, TxK is the game that’ll have you cursing one moment then back in the fray the next.

TxK can be summed up pretty easily. There’s not much story to it other than navigate around a geometric shape that is zooming through space and shoot the enemies as they climb up the shape towards you. Each level is a different shape with different enemies and if they touch you it’s game over.

What really shines is the gameplay, which is masterfully constructed. 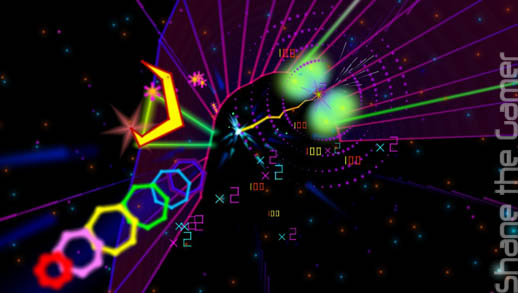 TxK begins as a simple game of enemies that need to be destroyed before they collide and kill you. Very quickly though, you’ll be facing decisions of moving to grab necessary power-ups and lives, choosing to ignore the incoming waves of enemies. Forcing these choices upon you is where the game excels – always appealing to that greed and desire and forcing you to sacrifice a sure footing in your ongoing battle.

The difficulty curve progresses well, allowing you enough time to figure out your surroundings and settle into a Level.

Before getting too comfortable however, TxK keeps you moving on to a new level and a new dynamic to navigate. This can feel frustrating at first, as you constantly feel a sense of stumbling through the gameplay without the chance to get your bearings. However, once you’ve adjusted to the kinetic momentum of TxK, the feeling of always being on your toes prevents those typical mistakes made when a player gets complacent. Enemies progress in a similar, but more traditional fashion of evolution – bringing a new dynamic to each level, but nothing you haven’t seen before. What truly makes them a challenge is the fact that your power-ups reset at the beginning of each level. 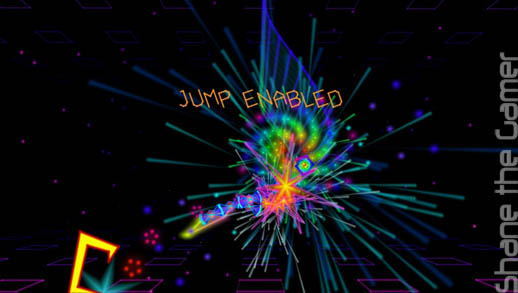 The ability to jump in at the last level you completed makes the difficulty of TxK not entirely punishing. While the difficulty of 80’s Arcades was designed to feed the coin slot, here TxK purely presents difficulty as something to overcome and does its best to assist you in this. Progression is eventual rather than hypothetical and the harder levels begin to feel more like boss fights than the end of a good run.

Like typical arcade shooters, the controls of TxK are as simple as left, right, and fire. Power-ups will give other abilities like jumping, but that’s pretty much it. You have the option of using the D-pad or analogue stick on the Vita, however the analogue stick controls a lot less intuitively than the D-pad. Often times you will find yourself wanting to move up or down and find no response, since these controls are not part of the game and have not been mapped to the analogue stick. 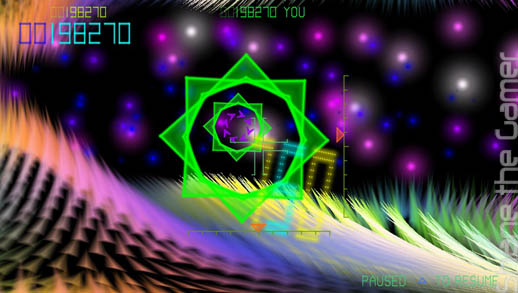 Graphically this game will hit you right in that nostalgic spot of your heart. Neon vectors floating in space really calls back to the days of the Commodore 64 in a retro aesthetic that is refreshingly not 8-bit in design. Despite the callback to the arcade, the game’s animation is still smooth and vibrant, and TxK takes advantage of the Vita’s processing and graphical power, exploding into neon particles and fireworks upon the completion of each level.

Contrasting the seemingly completely retro style is the soundtrack of the game. While all other aspects of TxK seek to harken back to the arcade era, the soundtrack has a modern techno feel with a pumping bass line that would feel right at home at a rave. This isn’t a bad thing necessarily, as it adds momentum to an already fast paced game, but it does feel out of place at times, and doesn’t quite complete the overall vibe that Llamasoft seem to have gone to great lengths to instill into all other elements of TxK. 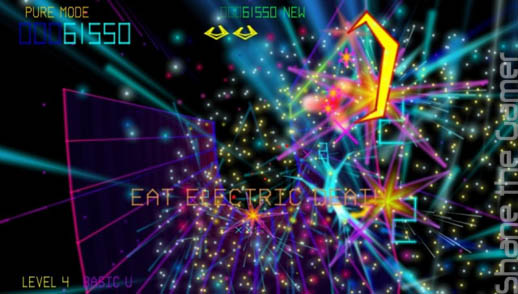 TxK is a brilliant example of a retro game that is still fresh and exciting.

While many titles in recent years have embraced the visual styles of the 8-bit era, TxK replicates a retro style in a complete sense that embraces the successes of the period and cuts out the failures. Its pacing and progression make it a hard game to put down, and upon completion offers variety to gameplay through various modes and challenges, as well as the desire to constantly beat your top score.