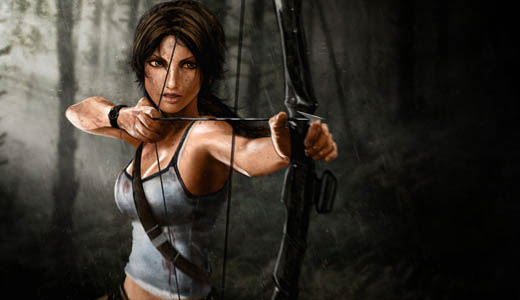 It’s been seventeen years since Lara Croft first burst onto the scene on the the classic and era – defining PlayStation One and became an overnight pop-culture phenomenon.

From the mid-nineties to the early-noughties the Tomb Raider games enjoyed an unparalleled level of success on Sony’s original PlayStation and the PC.

It was Lara Croft’s sole PlayStation 2 adventure, Tomb Raider: The Angel of Darkness that brought it all crashing down on her head. Dull and awkward to control, the game wasn’t very well received. The game’s commercial failure resulted in the Tomb Raider franchise being plucked from the original British developers, Core Design, and placed in the stewardship of American outfit, Crystal Dynamics. 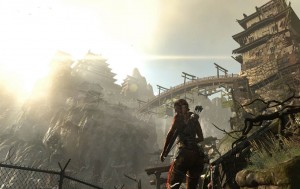 recent years Crystal Dynamics have had some success in revitalising the brand.

Between 2006 and 2008 we had two brand new Tomb Raider adventures, Legends and Underworld, as well as Tomb Raider Anniversary, a reboot of the original Tomb Raider.

For the new game, simply titled Tomb Raider, Crystal Dynamics have taken us right back to the beginning. For the first time players can experience the events that took Lara from a fresh-faced young woman to the sassy ass-kicking adventuress that we are familiar with.

In a similar way to the recent James Bond movies, this new Tomb Raider game offers up a more modern, rebooted origin for our heroine. Clearing away almost two decades of baggage that have weighed the franchise down, Crystal Dynamics have been freed up to create their own fresh take on Lara Croft. 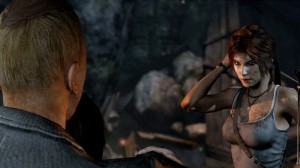 As before, Tomb Raider follows the exploits of English archaeologist Lara Croft; but this time a lot younger than in previous games, fresh from University and on her first adventure. Caught in a storm in an area known as the Dragon’s Triangle, Lara and her companions – including her best friend Sam, end up shipwrecked on the mysterious island of Yamatai.

The game opens with a sequence that wouldn’t look out of place in the likes of the Hostel or the Saw films. Having washed up on the beach, Lara is subdued by an unknown assailant whist trying to attract her friends’ attention only to awake tied upside-down in a candle-lit chamber. What follows is a harrowing scene that sets up the dark nature of this defining chapter in Lara’s life.

As you’d expect, Lara spends most of the time separated from her friends, fending for herself on an island that wants her dead. 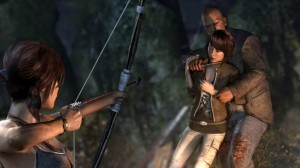 this isn’t the aloof and cock-sure Lara we’ve seen in previous games; just playing the danger for kicks. This Lara is a frightened girl, injured and way out of her depth; she is fighting for her life and that of her friend Sam, who has been kidnapped by the denizens of the mysterious island. With every encounter we see Lara struggling, both physically and mentally just to survive.

The pacing is just right, hooking me into a gaming experience that I found very difficult to put down. Several times the story seemed to be reaching its conclusion before suddenly, and to my absolute delight, swinging off in a new direction. 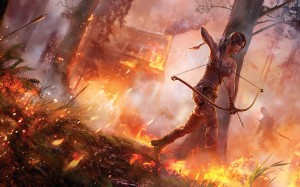 Tomb Raider’s gameplay comes by way of Naughty Dog’s Uncharted, as we all expected. The game is full of heart-in-mouth cinematic set pieces the likes of which will be familiar to PS3 owning Nathan Drake fans. The game also features some huge, jaw dropping environments that easily rival those found in the Uncharted games.

Long-time fans needn’t be worried by any apparent inspiration from the Uncharted franchise leaving us without Tomb Raider’s iconic puzzles. But, rather than go for huge multi-faceted puzzles like the epic nose-bleed inducing brain-teasers of the past games, this time the puzzles come in more bite-sized chunks.

They also seemed a bit easier than I remember from the old games. That being said, you still have to work at them, but you are likely to avoid the annoying frustration of being stuck for a few hours. 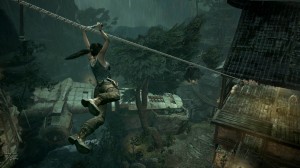 if the puzzles do get the better of you, Lara’s survival instinct is there to help.

A press of the shoulder button and all the interactive items within view are highlighted. Personally, the survival instinct ability is a bit too useful and something that the game could perhaps have done without.

As well as the puzzles on the main quest, there are a number of optional tombs, fit for raiding, scattered around the island.  These tombs borrow heavily from the Assassin’s Creed series and Far Cry 3, being self-contained mini puzzle-levels in themselves, and ripe for DLC additions in the future.

Fans of action will find themselves fully catered for as, on an island as inhospitable as Yamitai, Lara needs to be able to defend herself. In order to enable this Crystal Dynamics has completely retooled the combat. 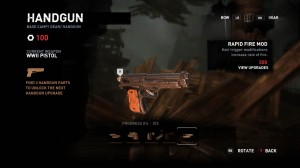 Gone is that awful lock-on mechanic that served Lara well in the early days; players will need to aim at their own targets now. There’s also no need to fumble about drawing weapons this outing, either. Lara’s stance adapts naturally according to her environment. If she feels threatened she crouches and readies her weapon. It’s a fluid game mechanic that allows you to concentrate on playing the game rather than on superfluous controls.

Another change is Lara’s choice of weapon. The young Lara favours the more stealthy bow over firearms (although a variety of which are still made available to players later on in the game). As the game progresses there are plenty of opportunities to modify Lara’s weapons. Salvage collected from caches stashed throughout the island and, bizarrely, from animals that you’ve killed can be used to upgrade weapons. 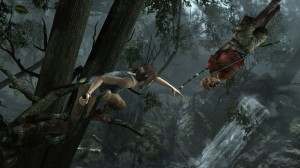 get up close and personal, Lara’s climbing axe can be used as a melee weapon. These brawling moves have Lara brutally attack her assailants in desperation, as if her life depended on it. You can feel Lara’s anxiety with every strike.

Lara’s moves have also been significantly updated of this outing. Gone are the ridged, robotic animations of the old games. Lara’s movements are directly affected by her environment as she runs, jumps, climbs her way through the game.

Armchair collectors are going to have a field day. The traditional Tomb Raider secrets have been replaced with a variety of optional collectable challenges, some of which add to the games backstory.

There are lots to collect, but it will boil down to whether or not you can be arsed or not. I strongly recommend that players take their time to explore each area in order to discover all that the game has to offer. 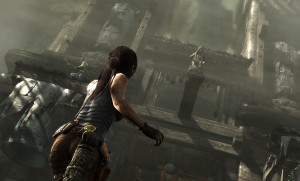 It’s not just the franchise’s game mechanics that have been updated. The graphics of 2008’s Tomb Raider: Underworld look positively primitive compared with the visual feast that Crystal Dynamics have prepared for us this time. Scenes are packed full of detail, grass blows in the wind and bird soar in the sky. I can only imagine how the game looks on a high-end PC.

A lot of attention has been paid to getting the game’s atmospheric effects right. During the game, the island cycles between day and night; giving the developers plenty of opportunity to play with the lighting and give us some spectacular sunsets and sunrises to look at. The games superb lighting plays a key part in creating the atmosphere of dimly lit subterranean chambers as well. 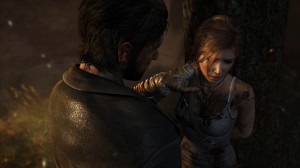 echoes the original game; you can almost make out the old cues, but with a new main theme for a new Lara. It is a rousing and dynamic score that adds wonderfully to the feel of the game.

Still on the games audio; for the most part the voice acting in the game is OK.

Lara’s mentor, Conrad Roth, does have a rather appalling northern English accent, coming across like Sean Bean with a voice impediment. And I’m not entirely convinced about the new voice of Lara, Camilla Luddington’s acting chops; she comes across a little too forced and earnest in her delivery for me. One very minor grumble, really.

It’s worth noting that this game is aimed at a mature audience. Being expletive-ridden Tomb Raider isn’t for the feint hearted. 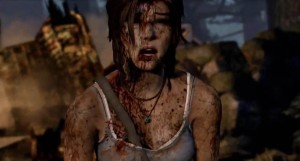 The game also doesn’t mess about when it comes to blood and guts; it’s full of gore. Whereas my PSOne copy of the original Tomb Raider was rated 11+, this outing fully deserves an adult rating.

As well as the single player campaign, Tomb Raider also has a multiplayer mode, developed independently by Eidos Montreal, the studio that made the recent Deus Ex: Human Revolution.

For the first time fans can play  a Tomb Raider game together. At this stage it would be unfair for me to give a verdict on the multiplayer as, due to reviewing an advance copy of the game, it wasn’t easy to find any multiplayer matches to play, let alone any locally.

From what little I have played, it seems very similar to the multiplayer mode introduced in Uncharted 2. Watch out for a more in-depth look at Tomb Raider’s multiplayer soon. 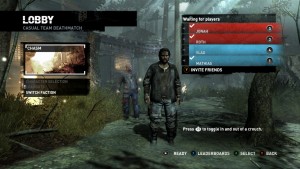 through this review I realise that I sound like a gushing schoolgirl and I make no apology.

This is the Tomb Raider that I’ve been waiting the best part of a decade for. Not since the original games on the PlayStation have I been so engrossed in the adventures of Lara Croft.

Tomb Raider throws aside all the gameplay constraints that were a legacy from the previous games; no doubt due to the technical limitations of the time. This really is a Tomb Raider for the here and now.

But not only is Tomb Raider a good game, it manages, unlike many of the recent triple-A titles, to maintain its greatness right up to the closing credits.

Crystal Dynamics have finally done it in giving us an incredible cinematic romp that has all the hallmarks of the Tomb Raiders of old but at the same time coming across fresh and new.

Tomb Raider is out for PS3, Xbox 360 and Windows PC on the 5th March