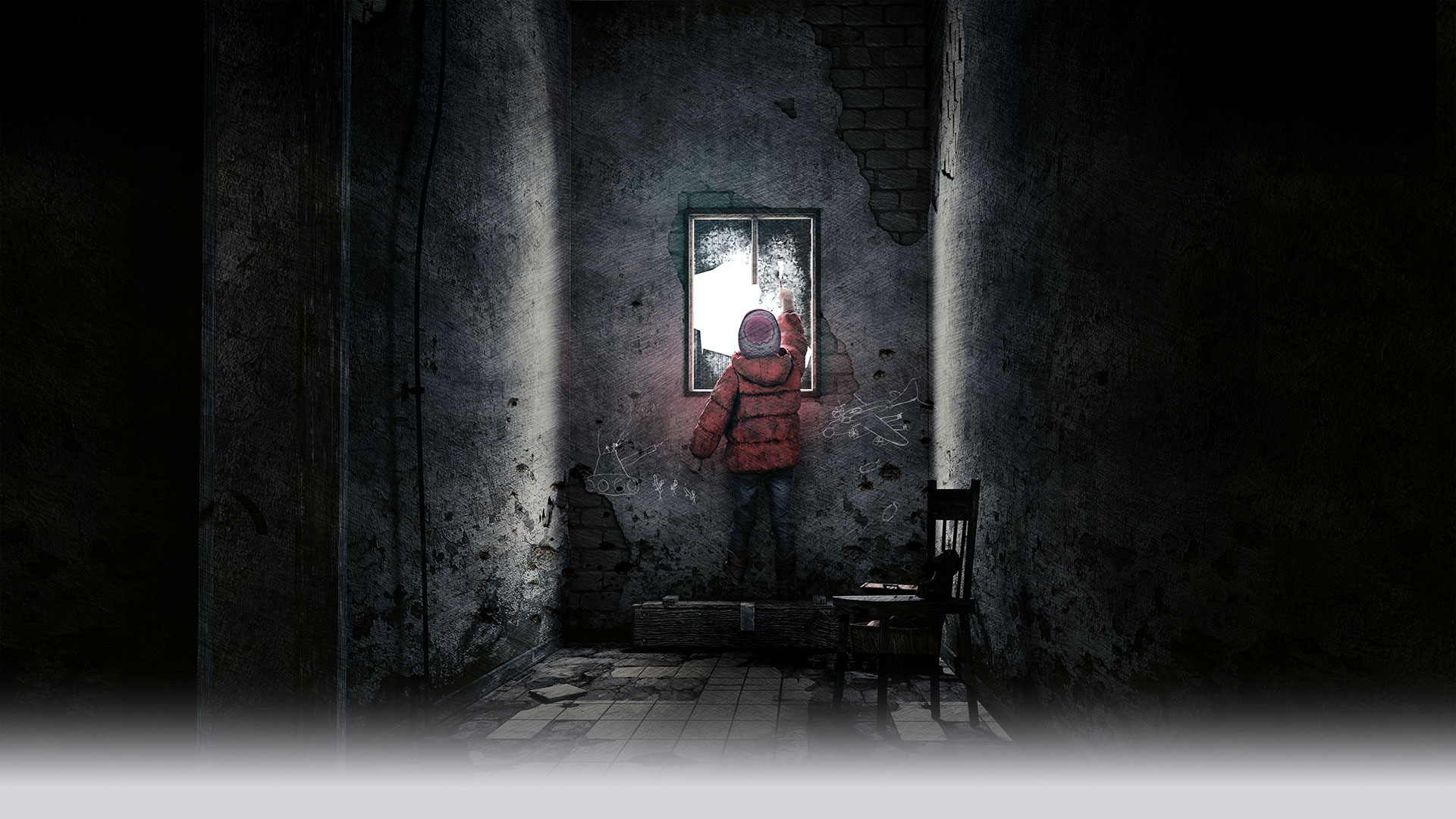 This War of Mine, released in 2014, brought a fresh approach to the tired war game genre. Instead of playing the action hero who can single-handedly take down the entire military edifice of the opposing force, This War of Mine put you in the dilapidated shoes of a civilian survivor.

No longer were you taking down hordes of elite units, but simply trying to find enough food. What resulted was a serious and thoughtful look at those who are powerless in time of conflict.

This War of Mine is not a ‘fun’ game. It’s not something you play really for the enjoyment of it. Instead, its straightforward message of the difficulties of surviving in a warzone as a civilian is meant to make you ponder what we allow our world to enact on one another. It highlights the powerless, the defenceless and the inherent injustice of war. There is nothing glorious or energising about the game; instead it is meant to engender some introspection and consideration of the other side of the conflict, the one you usually don’t see. 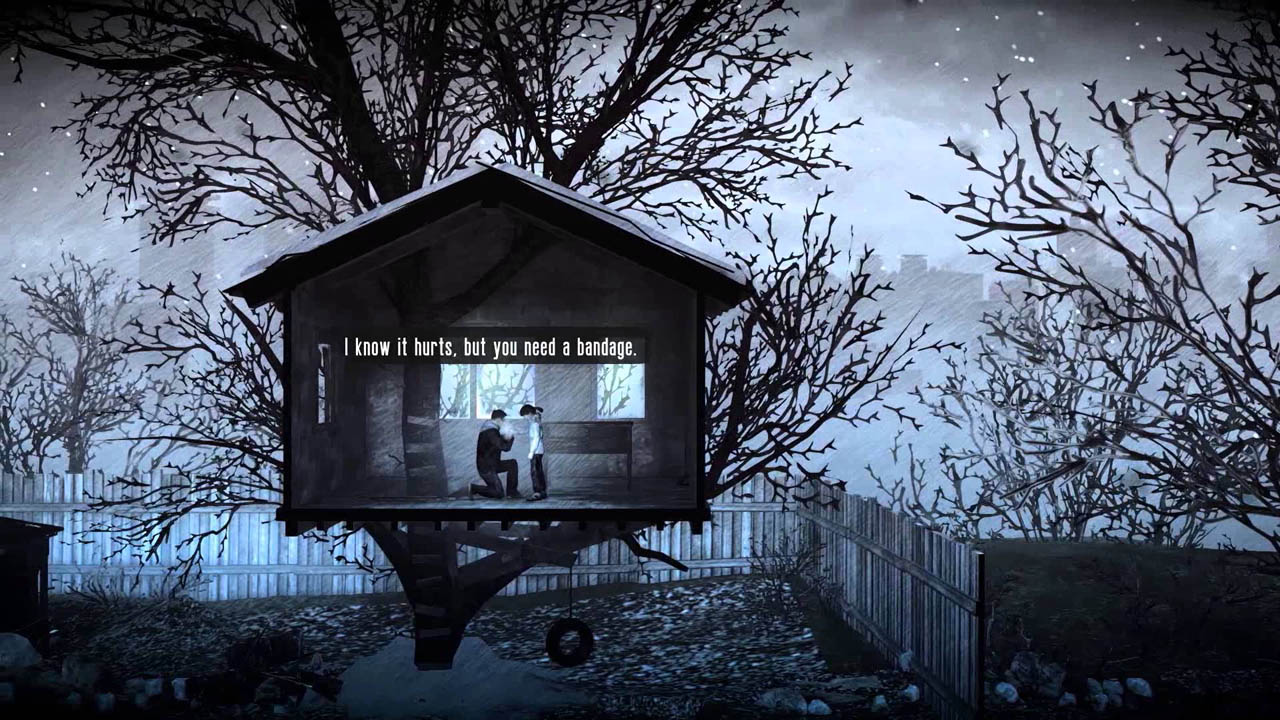 The game retains the core day/night cycle from the original release, and in this regard still plays as almost two entirely different, yet connected games. The daytime is spent using your resources wisely, healing group members, trading with merchants, and creating new conveniences like a bed. You’re on a strict time limit however, and your resources are never quite enough to do what you want to do, so choosing what to do is always a careful consideration.

At night you assign duties to your household and go out scavenging for supplies such as wood to burn, food to eat and medicine to use. Scavenging can be risky however – you may find yourself face to face with an aggressive NPC – or your may find someone in the place you’re scavenging, someone who may need those resources more than you. There is also the tension of bringing home exactly what you need to get through the next day while having a limited amount of space to carry it all. 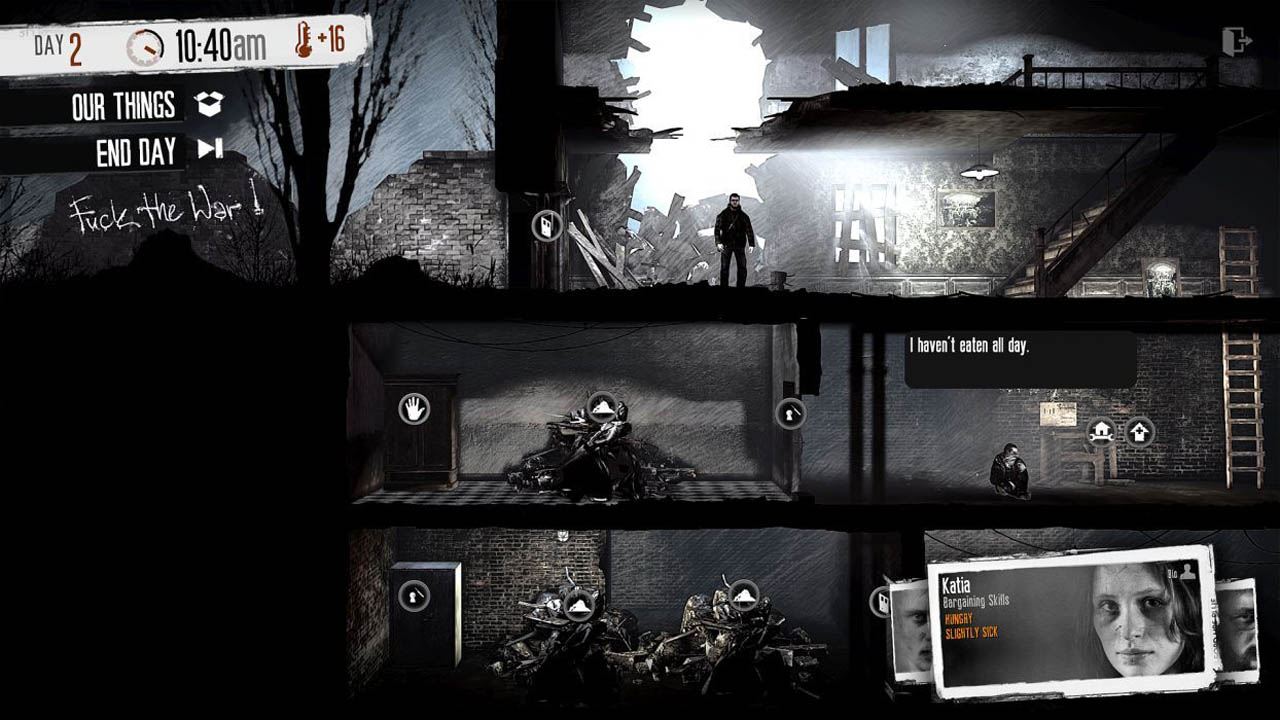 While the core gameplay remains the same across the expansion, there are a few new considerations given to the new burdens of taking care of young children during war. The Little Ones is an expansion to the original game, but more in the sense of a new integrated package rather than a separate part of the game itself.

Children are part of the main game. They need taking care of just like any other member of your group, but cannot go out to scavenge and night and, just like real children, need to be talked to, and have places to play and be themselves. In comparison to the original release, the inclusion of children adds an extra layer of reality to the game. Of course there would be children in war zones and of course they would need care and attention while not being able to give those back themselves. They do however want to play and to do the kind of things that we consider normal. 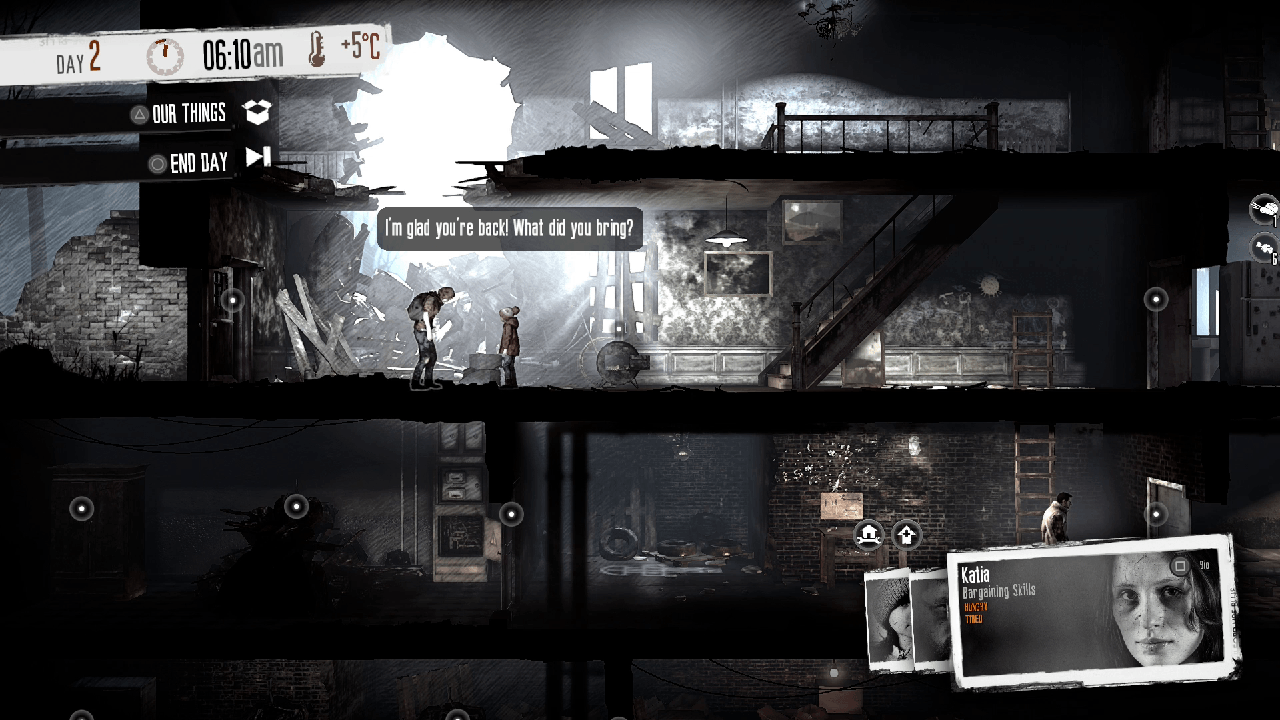 Children cannot die directly – a deliberate choice on 11-bit Studio’s part, but they can disappear, such as when they may be taken off you by the Red Cross if they’re too sick, for example. You may also come across children while scavenging, or they may come to your house for supplies and comfort.

Whether you help them or not is up to you. It is your choice to push the narrative in the direction you wish to take it. Most things are possible; you may steal off the elderly couple or give out your precious resources to everyone who comes to the door, but the game is set up to ask “really, would you?” It’s a sobering thought. Somehow knowing that the small cast of characters are scans of real people – the developers and their children makes every decision more impactful. 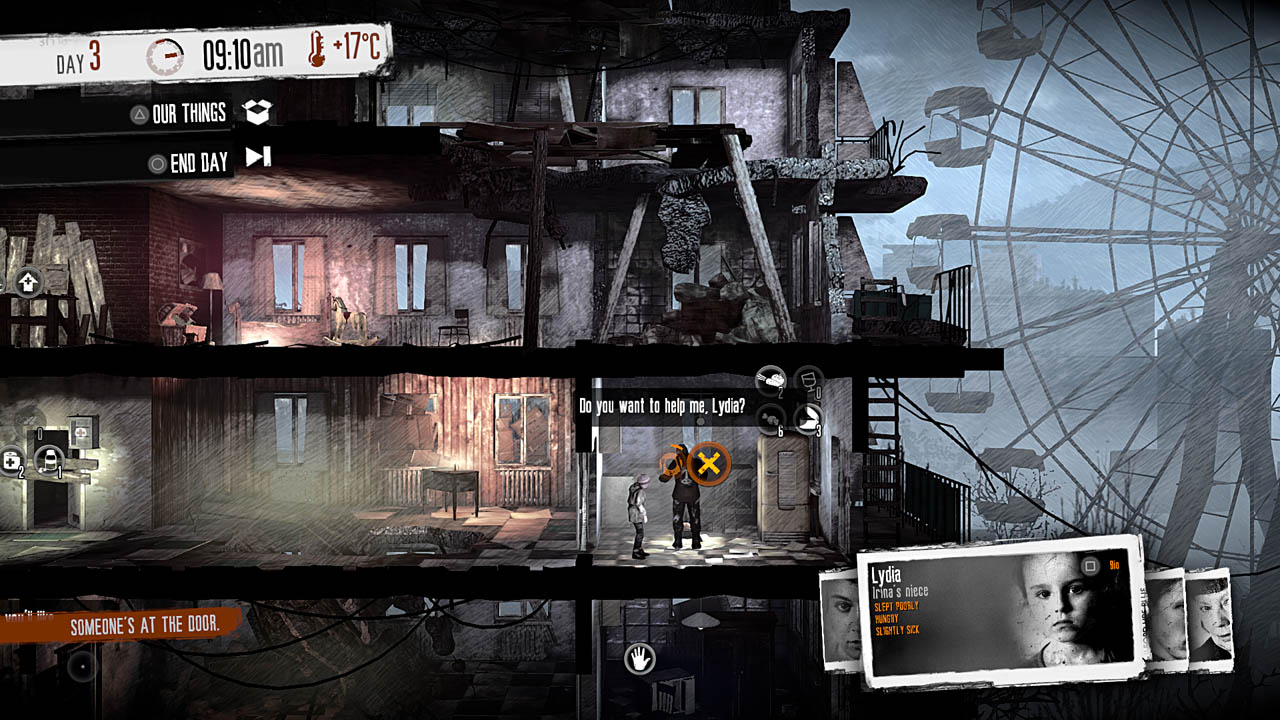 The gameplay is somewhat analogous to a game like Papers Please. You may choose to help someone out, but it’s always at a cost to yourself and your group. Decide to give someone some wood? That means less to burn when the cold sets in. Agree to go help pull some people out of burning rubble? That means you won’t be at home during the day to build up your home. Carefully deciding to be good to someone always comes at a cost to yourself, and is the source of thoughtful tensions that come down more to a moral decision that a resource allocation activity.

The controls feel a bit uncoordinated on the PS4 in comparison to playing the original game on PC. In particular I found it difficult to ensure the player moved down stairs, an action that you have to take quite often as you traverse the environment. In the end it’s not a big issue, and it’s something that could easily be resolved in later updates. 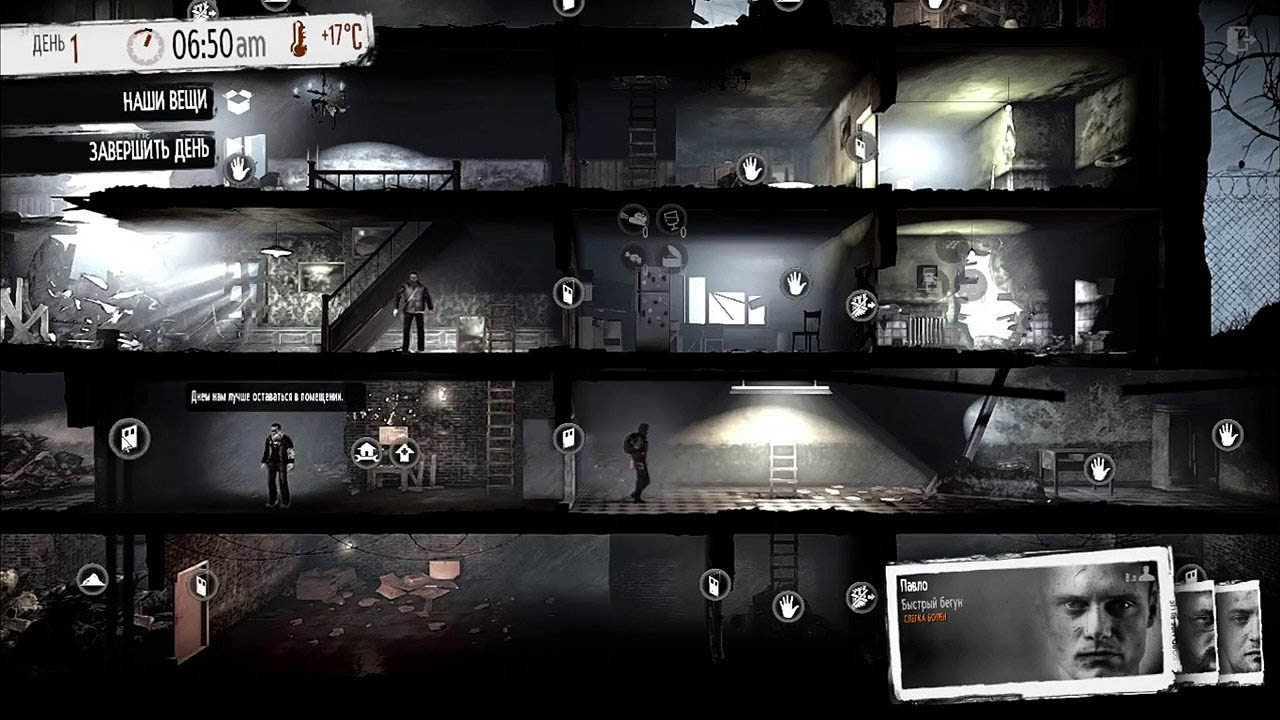 In the end, the mechanics of the game are not that exciting. The gameplay takes a back seat to the story as directed by you. But that’s how it’s meant to be. Just like how Spec Ops was a deliberately boring shooter to focus the player on the story, so as it is here. I would go as far to say if you focus on the mechanics of the gameplay, whether you are annoyed about the characteristics of your starting characters, you aren’t playing the game properly. I feel like doing this is would be peeking under the hood of a car when the main point is how it drives.

There’s nothing quite like This War of Mine. It was refreshing in 2014 to experience the other side of war, and this new expansion successfully furthers the original game’s goals. If you didn’t pick it up in its original incarnation, it is well worth a look. If you’re tired with the stop and pop nature of most military shooters, This War of Mine could well be the game for you.