This War of Mine – Review 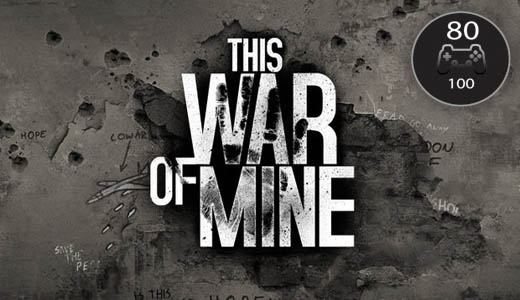 11 Bit Studios has strayed from the beaten path, focusing on a completely different aspect of war games we’re used to. Rather than mowing down masses or running around as a headshot hunter.

This War of Mine reminds you that not everyone is a soldier. Struggling to survive in a city under military control, your ragtag civilian collective has to scavenge, create and trade for the things they need to stay alive. This is, of course, a lot easier said than done.

The first thing that you notice is that the command to start the game isn’t ‘play’ – it’s ‘survive.’

From the get go, this point-and-click title clues you in on the mess you’re about to stumble into. You’re thrown in the deep end, sans the standard hand-holding tutorial. 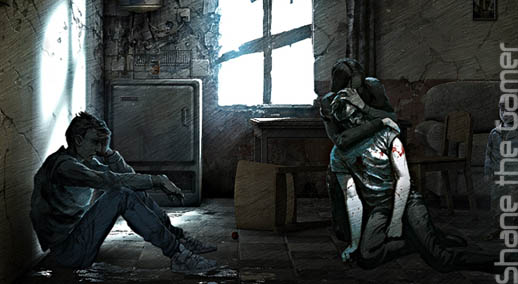 Honestly though, it was pretty refreshing, and fits right in with the dire vibe this title pushes out. It doesn’t take too long to realise what the different actions are though, and the decisions you’re forced to make escalate in terms of importance and severity very quickly.

During the day, you control a group of war-torn survivors who upgrade and manufacture items through your safehouse. By night, it’s scavenging time. 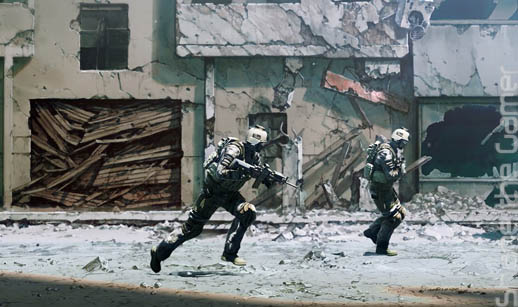 This War of Mine is equal parts resource management and stealth point-and-clicking.

You have to scavenge or steal to upgrade facilities like water purifiers, workbenches and even furnaces – if it’s not the snipers that get you, it’ll be the cold.

Your characters have varying skills like fast running, better cooking, and better scavenging (really handy as you start off only being able to carry a handful of materials at a time). It’s a constant battle to make sure that your people are fed, well-rested and healthy. It only takes one fruitless scavenge before everyone begins to starve. 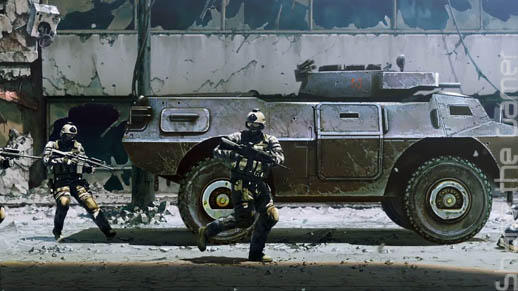 The graphics aren’t cutting-edge flashy, and they’re not there to show off.

Don’t get me wrong though – they’re nothing short of beautiful. They’re stripped down, bleak and bare, not too far off from the state of your crew. As a storytelling medium, it more than does the trick.

Fans of the Sin City franchise will feel right at home with the monochrome visuals. This game artfully captures a city in a state of decay, as peripheral elements like flames on the roof of bombed buildings have an almost mesmerising glow. 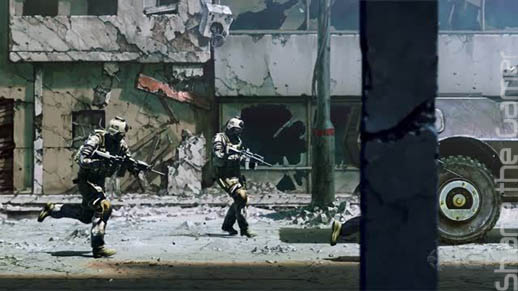 Under the cover of nightfall, the character of your choosing will skulk through various buildings around the city, pilfering essentials anywhere they can be found. With a limited amount of time, your scavenger needs to scour everything from wardrobes to rubble, all the while evading hostiles and making it out before the sun rises.

Heavier moral questions get asked as your equipment and your needs escalate. Will your moral compass allow you to steal from, or even slay other survivors to stay ahead? And if you do, will you be prepared for the retaliation ahead? 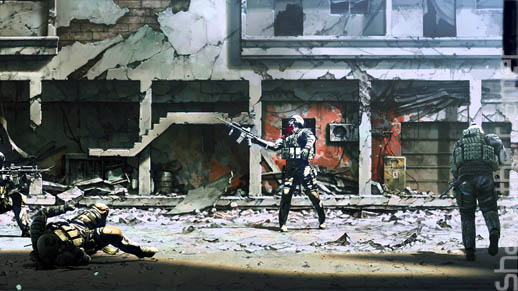 In case you haven’t picked up on it yet, this game is tough.

Expect to starve, get robbed and just generally die a lot. A fair bit of the chaos comes from random chance events.

Do you help that injured man at your door? Or is his posse waiting around the corner to rob you blind and stab your crew? Any wrong turn could be your last, but that is part of the appeal. You’re always on the brink of dying, and you often will, making you revisit choices on new playthroughs and forcing a re-evaluation of your principles in order to stay alive. 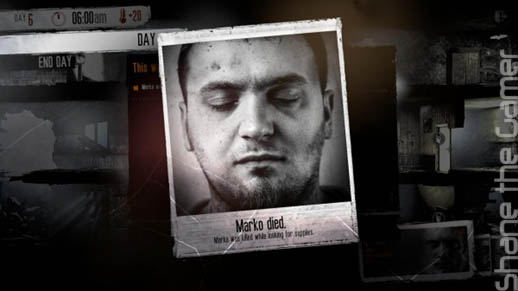 As you progress through the game, your needs evolve as you move from surviving to thriving.

While basic items such as timber and scrap electronics are essential for setting up your safehouse, they give way to luxuries such as the moonshine still, allowing you to manufacture precious trading goods.

Your garden can grow herbs that eventually become the tobacco in your home-rolled cigarettes, which in turn can be traded for weapons and ammunition. While your outpost develops, the more you have the more you stand to lose as thieves and threats step up to stifle your advancement. 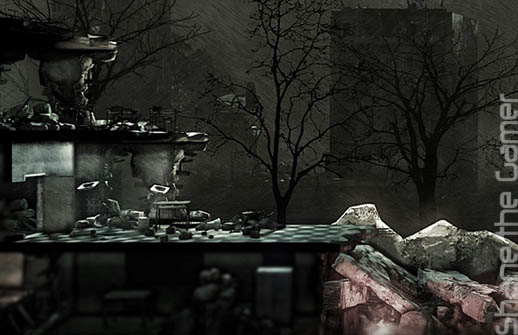 In terms of tunes, This War of Mine has a very sparing soundtrack.

It’s pretty much just a handful of suspenseful tracks that are on repeat til oblivion. While it does the job (I suppose), it’s pretty bland and unremarkable. While this is arguably the weakest element of the game, it doesn’t exactly impair all that much.

There’s a respectable amount of detail buried within this title. Other survivors in the city have specific needs, such as medicine for their injured, giving you more of an edge when bartering for necessities. 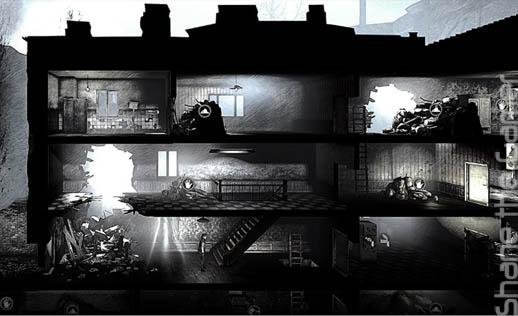 The radio in your safehouse provides a continuous narrative, broadcasting tales of other civilians and their struggle with the military lockdown.

Twisting the tuning dial lets you pick up on different channels, adding snippets to your logbook such as “You’re listening to radio Pogoren. We regret to announce that our colleague, Jovan, died this morning. He was shot by a sniper on his way to work. He will be missed.”

There’s also a practical element to it, as warnings of looters or military raids hit the airwaves before the threats reach your door. Plus, there’s always the classical music station that provides just about the only semblance of ease. 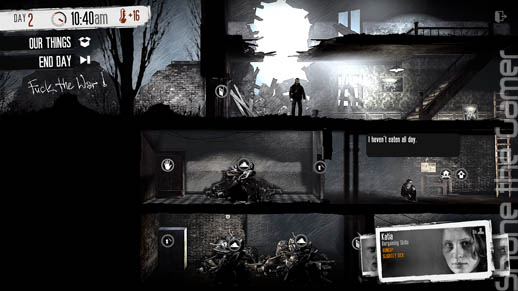 One of the most poignant elements of this title is the human element it expresses in various shapes and forms. Characters feel remorseful for stealing or killing, and their consequent sadness actually affects how they function in the game.

Other characters can console them, but the emotional trauma can cause them to spiral into a full-on depression, leaving them broken and defeated. There are other idiosyncrasies that members of your group will have, such as an affinity for reading books, or the desire for the comforts of a cigarette. 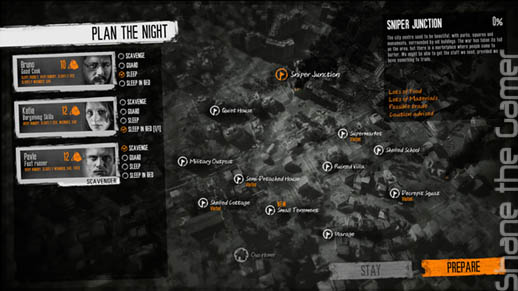 You can try, but you’ll never be able to completely satisfy all of their needs and wants. At some point there will be someone you won’t be able to help. Try as you might, there isn’t always a solution – the best you can do is minimise their suffering.

Ultimately, This War of Mine is more than just a game. 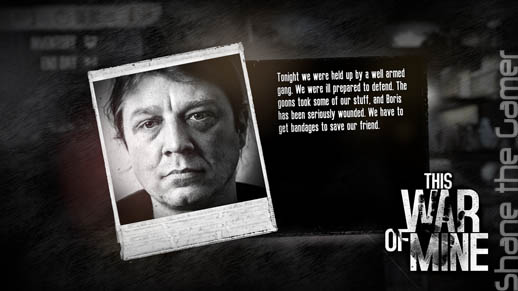 While it is enjoyable and challenging entertainment, it’s also an artful representation of the bleak and terrifying realities of war. The decisions you make are never easy, and every choice carries weight as you do whatever it takes to survive.