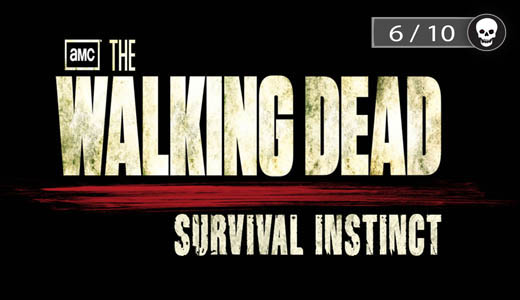 It is considered bad form to make mention of zombies in a zombie movie, and The Walking Dead TV show is no exception. Terms like “walkers”, “Biters” and “roamers” are used to describe the shambling undead, when the rest of us would scream “zombie” and run a mile.

I’ll put it right out there now. Anyone expecting something that rivals the Left 4 Dead games or Dead Island is going to be sorely disappointed. What we do have is a rudimentary effort to create abit of interactive entertainment designed to appeal to fans of The Walking Dead TV show. 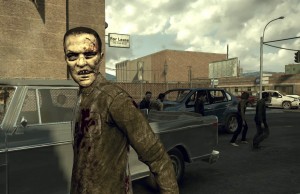 The game slots itself into The Walking Dead’s continuity as a prequel to the events on the TV. This is the story of the Dixon boys, the brooding hillbilly Daryl and the psychotic Merle, up against the zomb… I mean walkers, biters or whatever.

Players take the role of the more amenable brother, Daryl, who is out hunting with his dad when the outbreak occurs. With everything going to hell around him, Daryl sets off into town to find his wayward brother who is supposedly locked up in the police station cells.

The Walking Dead: Survival Instinct is laid out as a road trip. The Dixon brothers are driving across country stopping off for supplies on at various locations on the way. At these locations they bump into other survivors, some of which will want to tag along. Depending on the amount of on seats in the boys’ vehicle, they can as well. Not enough space and you will need to choose who goes and who stays to die. This is done with a click of a button, no remorse, no nothing; weirdly sterile. 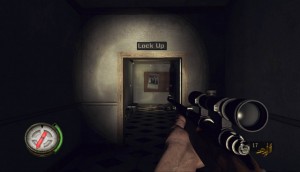 The game offers players a bit of strategy in choosing the route between towns, as well as the towns to visit. Backstreets use up more fuel, result in less breakdowns and yield a greater opportunity to find supplies. Roads offer a balance and Highways use less fuel, have more breakdowns and fewer supplies.

If your car breaks down or you are getting low on fuel you are going to have to get out and look for the part or petrol that you need. The first time this happened to me was when I chose the highway and ended up with a flat. This resulted in me sneaking around an auto shop looking for a tyre. Well actually I was following the compass needle pointing to the tyre location. It was entertaining moving around the walkers, taking the odd one out, grabbing the tyre and making a run for it.

After a while traveling between towns, enduring what I considered more than my fair share of breakdowns, obstructions and fuel crisis; I realised that there were only a handful of these intermediate locations, like and roadside campground, a diner and an auto shop. In the end I was just praying that I’d the little red line on the map would just get to the destination.

Saying “no” to the game’s suggestion of stopping to look for supplies in a nearby area usually ended in tears as well; often resulting in the car spluttering to a stop in the middle of a herd of walkers. Game over, or rather a restart watching that sodding red line on the map again, this time with fingers crossed. 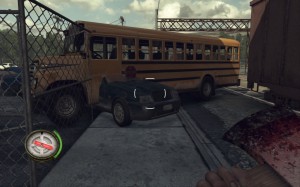 When you finally reach your destination, before entering the level, players get to equip and assign tasks to the other survivors. These range from searching for supplies to just staying put in the car. There’s a danger rating for each task, which if too high means there’s a good change they aren’t coming back. It reminded me of the assassin missions in Assassin’s Creed Brotherhood.

At each location there are a number of collectables to find as well as countless ammo clips and weapons. Pistols, rifles, grenades and even Daryl’s iconic crossbow can be used to take down the undead hordes.Watch out for those dead-looking walkers, they have a habit of getting up just as you walk pass. It’s worth taking a good look around each location in order find all the pickups and safer route to you target, which is conveniently marked on the onscreen compass.

If you think Merle’s love for his brother extends to helping him fed of the undead, you’d be wrong; this is Daryl’s lone adventure. At the beginning of each mission Merle has a reason for leaving you to it. It’s a shame as a bit of Daryl and Merle co-op action would’ve been great. Another missed opportunity in a game that could’ve been so much better. 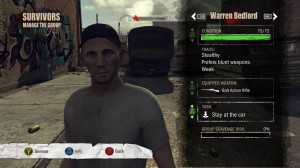 For a game that is outwardly rather basic-looking, the encounters with walkers require quite a bit of thought. Surprisingly, this isn’t a run-and-gun sort of game. There’s more stealth involved that shootouts. The best way to dispatch walkers, especially in the early game is using a knife. Sneaking up behind a walker allows players to carry out a one hit execution. I found this to be the best method of dispatching them.

The combat is a bit basic, but the same could be said for Left 4 Dead. There’s a button for attack/fire and another for punch; which knocks the walkers back a few steps. The walkers take a few stabs in the face, or a single gunshot to the head to bring them down.

Remember you need to damage the walker’s brain to stop them; whilst a well-aimed shot at a limb will likely blow it off, it won’t stop the undead from coming after you. If a walker grabs hold of you a mini-game of sorts is triggered where you need to move the cursor and plant your blade in its head. Get surrounded by a load of walkers and you’ll find be doing this a few times until they are all down or get overwhelmed.

If there’s no option but to use a gun, its best used from a distance and in a manner the takes out all the walkers in earshot. Fans of the TV show will already be aware that gunfire draws walkers. Use guns sparingly.In leaning toward stealth over action, the game does well in capturing the tension of the TV show. 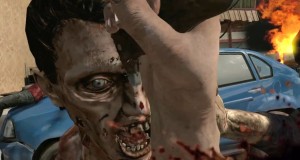 At every opportunity it is best to stay low and sneak by walkers. Try not to run, either, as Daryl’s a sweaty guy; evidenced by the water dripping down the screen when he exerts himself. The walkers can smell that sweat. Go slow, be cool.

I can’t say that The Walking Dead: Survival Instinct is a nice-looking game. The visuals are a little below average by today’s standards. Many of the main locations are a bit sparse and the cookie cutter random stops do get annoyingly samey. The walkers, whilst impressive to begin with, only have a limited number of variations; on many occasions I found myself under attack by a group of undead triplets. The game’s passable graphics become less impressive the more you play, suggesting that the game was rushed out the door. 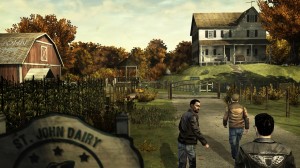 AMC’s hit TV show deserves a much better game than this.

The Walking Dead: Survival Instinct screams cynical cash-in. It’s not awful, but it can get a bit tedious. Whilst reviewing the game I had to take regular breaks and play something else for a while.

I did however keep on coming back; and that is because whilst it is very much a flawed game, it can still be fun.

With Activision not having any copies of the game available for review, I stumped up twenty bucks on Steam for the game. For that price I think that I got my money’s worth. I’m not sure that I’d feel the same way paying full price for the console release. I’d be happy recommending this to fans of the TV show if it were a budget title, but not as a full price game.