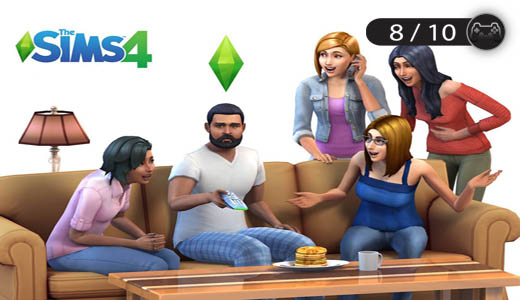 How can I possibly offer readers a comprehensive review of a game that continuously surprises me, a game that can easily offer players a million different stories?

Your experience with The Sims 4 will be very different to mine. Even if you play exactly the same characters, for exactly the same amount of time, something will be different. An inappropriate risqué joke could fall flat, causing an unrecoverable embarrassing situation, or that first kiss requested slightly too soon.

It’s been fourteen years since The Sims were first introduced and five years since the last game, Sims 3. For the franchise’s fourth outing, this time it’s all about moods. But more on that later. 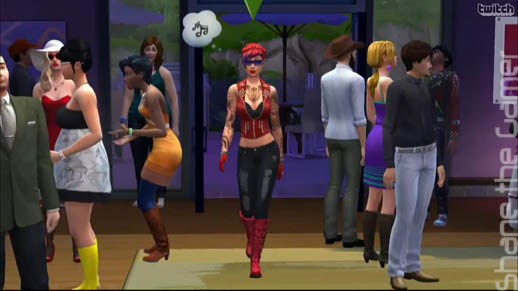 Maxis, the studio responsible for The Sims 4, pretty much invented the simulation genre. The original SimCity was a landmark in video gaming, allowing players to run and develop a city. What follows was a slew of “Sim” games, like SimEarth, SimAnt, SimLife and SimCopter. They were met with varying degrees of success, but none of them managed to match the success of SimCity.

With the The Sims, released in 2000, Maxis allowed players to explore the lives of the previously unseen citizens of their SimCity games. It was an instant hit, allowing slightly creepy voyeuristic view of people’s lives before reality TV really took off.

Three games and dozens of expansions here we are again with The Sim 4. 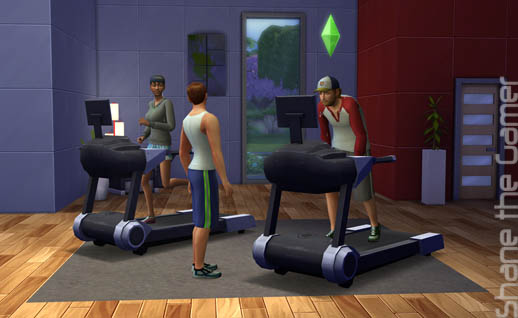 Whilst I played the first game as an intriguing psychological experience (in the same way I watched the first series of Big Brother), my interest tailed off with the subsequent games. I’ll admit that I wasn’t, initially, too keen on reviewing this fourth effort which looked to be more of the same.

As before, you start by creating your characters – your Sims. You can just pick a few pre-made Sims and/or families, and it’s of course much more fun to make your own.

The Sims 4 features a powerful and yet simple character editor that allows you to create truly unique Sims. 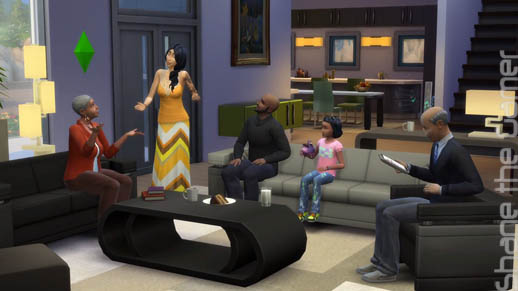 First you choose the sex and then the age of the Sim: child, teen, young adult or elder. Then there’s the walk style to choose, followed by the voice. From there you apply aspirations, hobbies and personality traits. The Sims physics are randomly generated, but it can all be adjusted from hair colour to the size of their nose. A choice of clothing finishes off an exercise that ensures that no two Sims are ever the same.

If you create another Sim you are given the option of selecting their relationship with the other Sims in the family. You can also elect to use the editor’s genetics function and create a blood relative that way. Even though Sims are grouped into families, they are not necessarily related, they could simply be sharing a house. 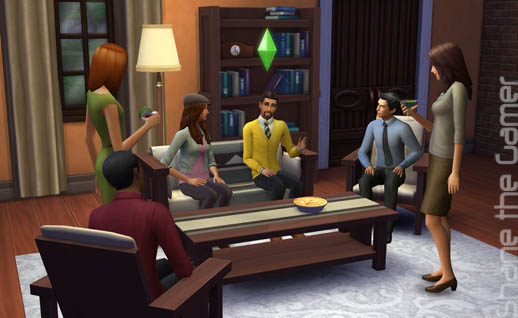 The game has two “worlds” to choose from: Willow Creek and Oasis Springs. Each world has a number of houses, some occupied and some empty, as well as a few vacant lots. The worlds also have a number of social areas for Sims to unwind and meet the locals. There’s a library, a museum, a nightclub, gym and park for your Sims to chill in. 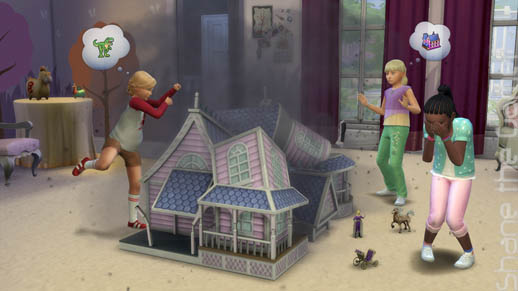 I created two young adult sisters living with their elderly mum. They had about twenty-six grand to their name, which I thought was enough for them to build and furnish their own property.

Whilst I can imagine some players spending hours meticulously creating their families, the build editor in The Sims 4 was what hooked me into the game.

You can set out your house’s floor plan, partition it with walls to create your rooms, doors, windows, another floor, stairs and a roof. Then there’s your kitchen, the bathroom, furniture, technology and gadgets. The game features a massive catalogue of items to make your Sims lives as comfortable as possible.

The game is made all the more appealing as a result of the extremely polished graphics. Everything in the game is rendered in beautifully crisp detail. Everything is also so well lit with real-time shadows and ambient light from windows giving the visuals real depth and bringing the game to life. 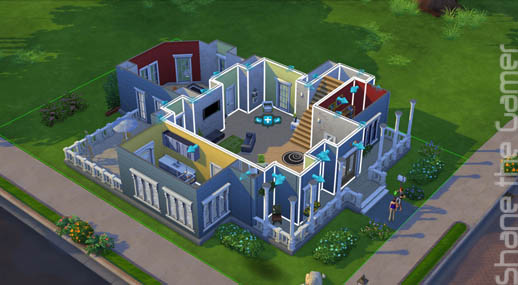 With the Sims ready to move into their house, the game switches to being a life simulator; with your Sims experiencing wants, needs, happiness and disappointment.

Unfortunately for me, $26,000 doesn’t stretch that far and my Sims ended up moving into rather Spartan accommodation. One of the Sims was particularly annoyed about the lack of a TV.

Sims talk in gibberish called Simlish. Listen to it long enough and you’ll swear that you are starting to understand it. Listen to it for too long and you are likely to get irritated by it. As well as the Simlish, as they talk, icon-filled speech bubbles indicate what the conversation is going on about. 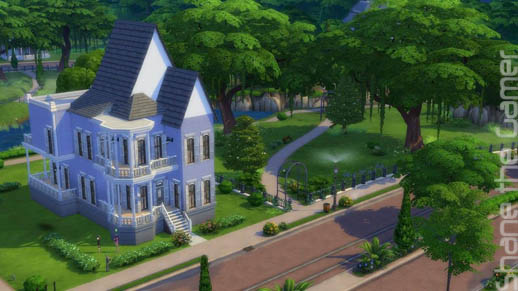 Each conversation that your Sims have affects their mood. An amorous advance met with a brush off leads to embarrassment, affecting self-confidence and opening up a range of related actions. Similarly, if the flirt is well-received, further romantic options may become available. Sims moods include being happy, playful, flirty, energized and host of others.

It’s not just the Sim under your control that are affected by moods, saying a joke to someone in a tense mood sees them become annoyed. A heartfelt compliment, on the other hand, may be enough to snap them out of it. 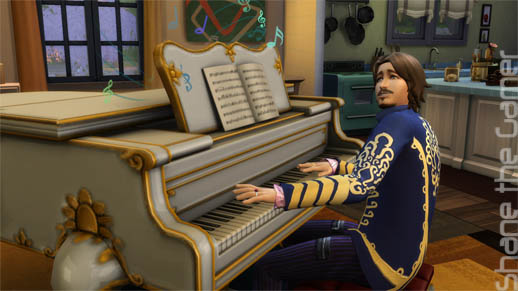 It wasn’t long before The Sims 4 had me under its spell.

As I watched, the Sims that I had a hand in creating took on a life of their own. With the odd nudge I was sending them on dates with the local fellas and having them pass out on the nightclub floor. Playing The Sims 4 is like experiencing an interactive soap opera.

The aim of the game is to fulfill your Sims aspirations, which are based on their character traits. This could be related to anything from creating a family to getting a promotion. In the meantime you are free to gain stuff; to gather material wealth, get a bigger house, a better car, a bigger television, smarter clothes, more friends, better relationships and a better job. 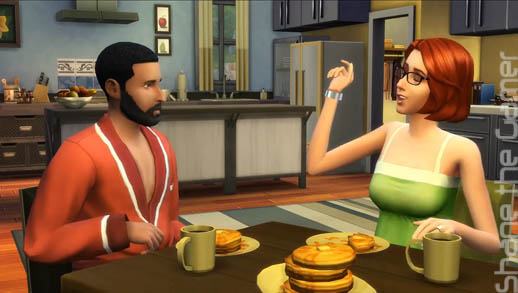 With my Sim family seemingly getting on with life I went to pay a visit on some old friends.

It was great to see the affluent Goth family again. The charming head of the household, Mortimer Goth, was still as much a hit with the ladies as he was when I first met him in the original Sims game fourteen years ago. After a bit of reacquainting I had Mortimer getting amorous with his lovely wife, Bella. One thing lead to another and before I knew it they were at a bit of woohoo for a baby. I left them in the sack and returned to my family.

Back in the more modest household, something was wrong. The sisters were upset. Then I saw it – an urn was resting on the floor.  Whilst I was over having fun with the Goths, their mother had died. 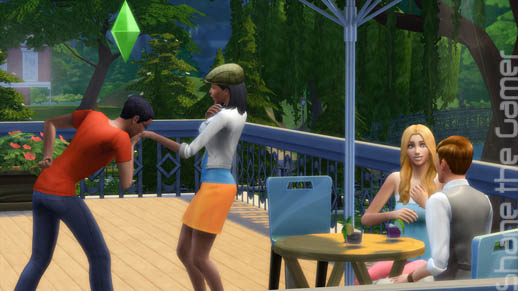 The Sims age. By default they live 90 in-game days. You will see children grow up, get old and die. Believe me when I say you can get quite attached to the little guys and miss them when they depart for the hereafter.

I needed to cheer the girls up and I thought Mortimer Goth was just the man for the job. So I switched back to the Goth family to go and get him.

It seemed that Mortimer and Bella’s woohoo had been successful. There was a new family member in the Goth household. Also, Mortimer had got old and was now sporting a silvery mane. 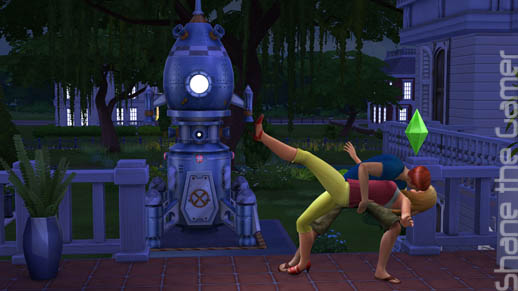 Regardless, I still sent him around to the sister’s house to try and console her. Before long I had Mortimer laughing and joking, bringing happiness back into the household.

Then I got a bit carried away.

It wasn’t long before Mortimer was professing his undying love for my Sim. A quick divorce later and Mortimer was married and moving in with one of the now very happy sisters. She’d got over the death of her mother, got a job in IT and life was good.

Then the step-daughter turned up on the doorstep. But that’s another story. 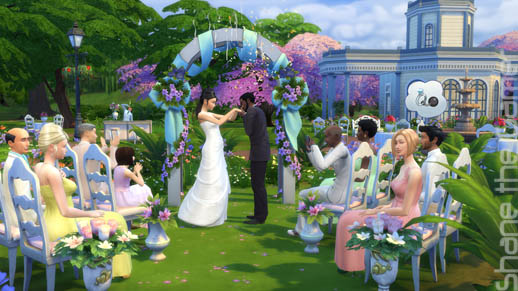 It’s these social interactions, these little stories, that make every moment in the game a unique experience, and what kept me coming back for more.

Whilst I’ve not been feverishly playing the previous game, The Sims 3, I know a lot of players have. A lot of fans have also spent a fortune across almost twenty expansion and stuff packs. That’s quite an investment. Now, with The Sim 4, they get to start their investment in the franchise again.

Whilst I’m a middle-aged man and unlikely to feel left out in water-cooler Sim discussions because I’ve not got the latest expansion, I’d imagine it’ll be a different story in playground for the game’s main tween demographic. 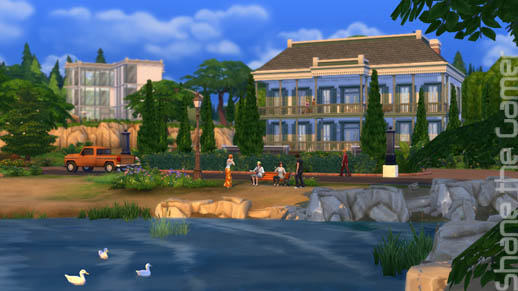 I can’t say I agree with The Sims calculated add-on program, especially for The Sims 4 – which seems to have deliberately left stuff out for the expansions, like cars and pools. To EA’s credit a five year gap between base releases is probably long enough for The Sims fan base to move on (or grow up) and be ready for the next batch of players.

Players that have registered copies of The Sims 3 and its expansions can earn up to 13 in-game rewards for their loyalty. In the form of Sims plum bob-shaped trophies, these rewards can adorn the shelves in your Sims’ houses offering unique moods and personalities. It’s not much, but as least EA are acknowledging fan loyalty. 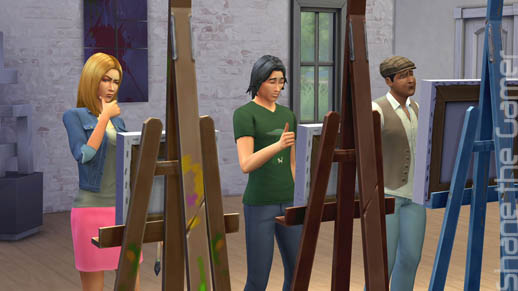 It would be easy for me to dismiss The Sims 4 as dumb.

I wanted to say that the game was something designed to simulate the mundane everyday life of an adult that’s a novelty for children who look to being grown up with envy. Yes the routine task are dull, but at least the Sims now have the sense to take themselves to the toilet, a task that was player initiated in earlier versions.

But it is so much more than that. Creating Sims, building their houses and fulfilling their aspirations all offer their own rewards. The game appealed to my creativity and at the same time was a voyeuristic guilty pleasure. You’ll get out of The Sims 4 exactly what you put in.

The Sims 4 is out now on Windows PC.