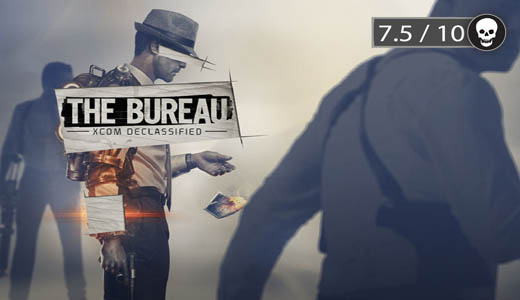 The Bureau: XCOM Declassified sees the much-loved XCOM turn-based strategy series whisked back to the 1960s and made into a third-person shooter.

It’s an inspired change of game genre in which to effectively tell the origin story of the XCOM organisation.

At the height of the cold war President Kennedy established The Bureau of Operations and Command to oversee military operations should the Soviet Union invade the US. When evidence of alien activity becomes apparent, The Bureau is repurposed, as XCOM, to deal with this new threat. 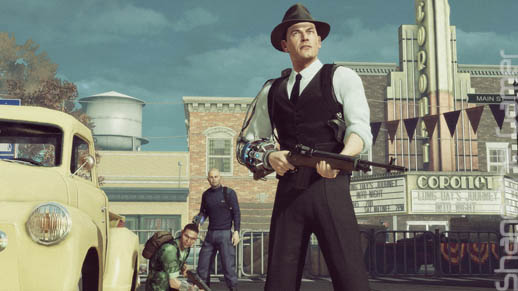 Players take the role of William Carter, a former CIA agent haunted by his past who stumbles into the story by being in the wrong place at the wrong time. Fortunately for XCOM he is exactly the right man for the job.

2K Games have really embraced the 1960s setting with a superb art style. The colours have a muted but at the same time an oversaturated tone, mimicking old movie stock, creating a very realistic B-movie visual experience. The game characters all look the part as well, the men with brill creamed hair and the ladies all prime with strikingly red lipstick. 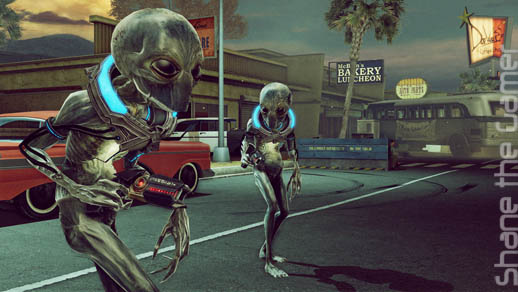 Even the player’s character, William Carter has a suitably chisel-jawed look and wouldn’t look out of place patting his secretary’s arse on 1960s cigarette poster. On the subject of cigarettes, as you would expect in those unenlightened times, everywhere you look in the XCOM base there are ciggies smouldering in ash-trays and everyone is chugging on cancer-sticks like they are going out of fashion.

With William Carter hastily enrolled in XCOM and placed in charge of an XCOM squad, players must select the other squad members and enter the field. To begin with The Bureau eases you in to the gameplay, sending you on set missions. Later on you get to wander the XCOM base, talking with the other personnel in order to gain a better insight into what is going on, before selecting your own missions from the command center. 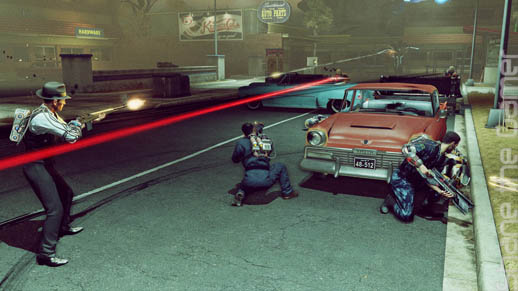 In the field you and your squad-mates must negotiate alien-infested environments in order to carry out your mission goals. The aliens are taking over small population centres, turning the citizens into brainless wandering sleepwalkers. They have also built structures, supposedly to terraform the planet. Paraphrasing the game’s protagonist, the aliens don’t intend to go away when they are done.

Many of the game levels are based on iconic pieces of Americana. We have small town America, a typical farm homestead, and an all-American high-school. Each location riddled with alien interlopers, superbly reflecting the Cold War fears of the time. Later on-as the ante is suitably upped, Carter and his squad start to bring the fight to the alien invaders taking to the combat to some more surreal extra-terrestrial environs. 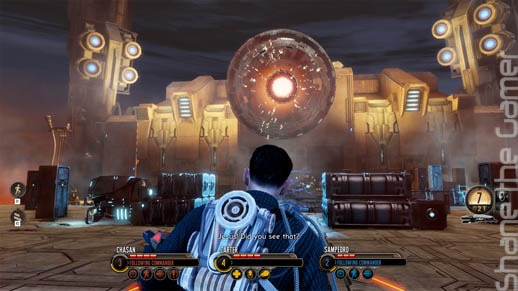 The mission levels are very linear affairs, which might be OK for a strategy game but it is a missed opportunity for a shooter. If 2K had taken a more over-the-top cinematic approach to the proceedings it could have helped the game to better differentiate itself from bring just an action version of XCOM. Sure, a ball-to-the-wall cinematic extravaganza may have alienated (no pun intended) the core XCOM fans but, really, haven’t they already done that in taking a beloved strategy game and making it into a twitch game?

There is, however, absolutely no doubt that this is an XCOM game; the difference being that you are not the commander overlooking the battle, you are instead the squad leader and in the thick of it. This definitely adds to the game’s atmosphere, with threats being more apparent and the real-time, the third-person gameplay being more frantic, and frightening, than the turn-based games. 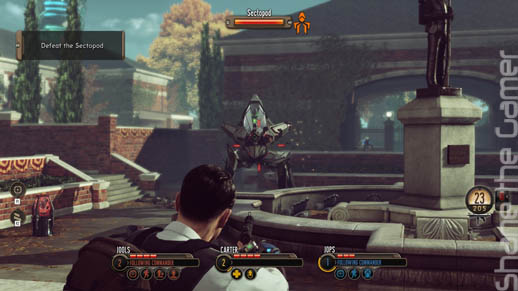 Unlike the small-scale alien incursions in XCOM: Enemy Unknown, The Bureau has to contend with a full-on alien invasion. Veterans of the series will recognised the alien creatures as the same types from the other games. Player must contend with sectoids, outsiders and mutons- to name a few – all right there, up close and in front of you.

In the turn-based strategy games I’m used to micromanaging my XCOM team from afar. In The Bureau you can give the squad orders to move, target and direct their special abilities using a command wheel that slows time when activated. For the most part, though, the AI does its own thing and sometimes not very well. I found that, especially on the harder difficulty settings, instead of running away from the enemy’s grenades my ineffective teammates just sat there next to it waiting to get blown away. I was then expected to haul my butt across the enemy’s line of fire in order to patch them up. It got very frustrating at times. On occasion my hapless colleagues’ early deaths actually helped me out as I no longer had to babysit their sorry arses. I could, instead, just concentrate on shooting the aliens. 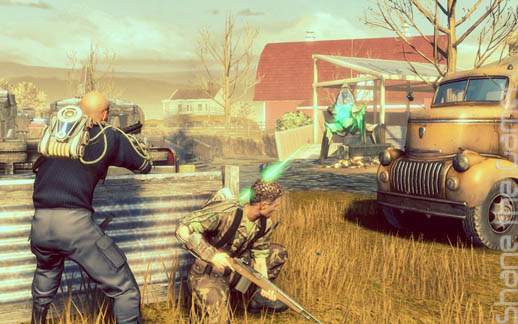 Thankfully, with time both Carter and your squad members gain new equipment and experience, which enables them to level up and gain perks. Each member of the squad starts with a number of initial perks based upon their class, such as healing and combat buffs. There’s a choice of four character classes, commando, recon agent, support and engineer; fulfilling the roles of soldier, sniper, medic and, um, engineer.

As the character levels up more perks become available. Players much choose one of a number of different perks options, locking out the other perks for good. Perks give the squad members performance enhancing buffs and special abilities, such as setting up turrets and healing comrades. Extra abilities are also provided by selecting specialised backpacks.  The backpacks can help you customise squad members for a particular role, such as an armour piercing pack for your commando. 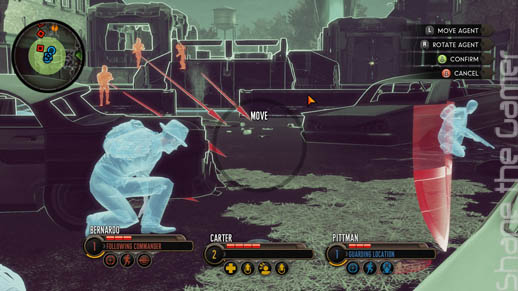 As you’d expect in and XCOM game, players can rename squad members and adjust their faces and the colours of their clothing. The vast amount of customisation that you can carry out on your squad members turns them into very unique characters. The emotional tie with some of your long standing squad member gets so strong that it is almost like losing an old friend when they get killed in action.

And get killed they will.

Thankfully there’s no shortage of volunteers to join your squad. As with XCOM: Enemy Unknown, there is a roster of agents standing by to join your squad. Of course, these greenhorns will be nothing but alien cannon fodder until they have get experience. The best way to ensure that your team is always at peak performance is to send your otherwise idle agents on dispatch missions. 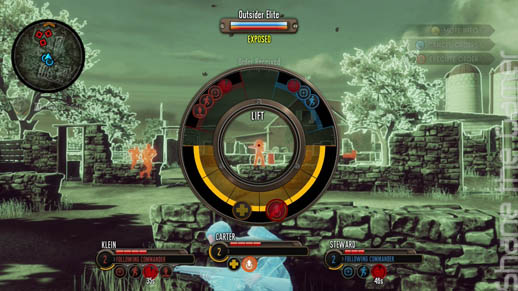 Borrowing from Assassin’s Creed, dispatch missions are carried out by selected agents separate from the main campaign. Once picked the agents are not available to join your squad for the duration of their mission. The actual dispatch mission occurs without being viewed, the success or failure being reported at the end of the mission period. Dispatch missions are an invaluable resource for training up your agents, making then better experienced to join your squad in the field.

Between missions you will find yourself engaging in conversation after conversation with other members of XCOM staff. Fans of Mass Effect will recognize the interface. Whilst it does advance the narrative, there is after a while a kind of, “whatever” about it all. The conversations also show off the game’s great-looking character models, but at the same time expose players to some of the worse lip-synching I’ve ever seen; it’s like watching a dubbed foreign movie, it’s that bad. 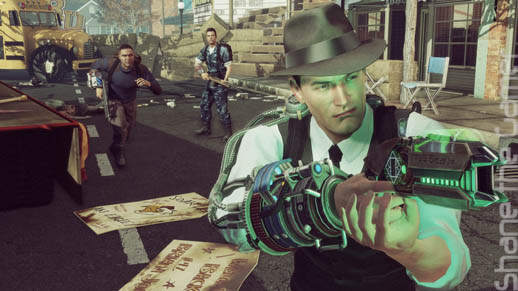 As a shooter, The Bureau is a competent affair that makes all the right moves, but does no more than it has to. The initial human weapons are a bit weak but this passes with the introduction of alien tech and special abilities. I found the game fun to play, but I think a lot of that was down to me enjoying XCOM: Enemy Unknown. It fact, playing The Bureau made me pine for the much more superior Enemy Unknown and a bit of turn-based strategy fun.

Whilst I wouldn’t say The Bureau was a wasted opportunity, it’s more that the game probably shouldn’t actually be. There’s a reason why XCOM is popular, and that’s its peerless sci-fi strategy gameplay. As good as The Bureau looks; it needs more that a fancy 60s art style to compete in the shooter genre. 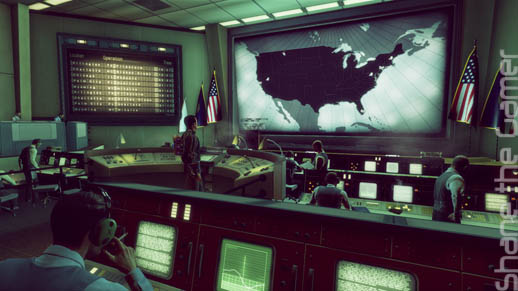 Regardless, The Bureau is undeniably an XCOM game, if a little misguided as to who its audience is. Non XCOM-playing shooter fans are probably going to have the most problems with the game, as at face value it is a pretty ordinary affair, although the B-movie setting will appeal to enlightened sci-fi fans. But without having that nostalgic feeling players unfamiliar with the series, those just seeking a bit of sci-fi action, are probably better of looking elsewhere.

If you are a fan of XCOM you should probably consider picking the game up, even if shooters aren’t for you. The Bureau: XCOM Declassified charts Earth’s first encounters with the aliens and the establishment of XCOM, making it an awkwardly important title for franchise.