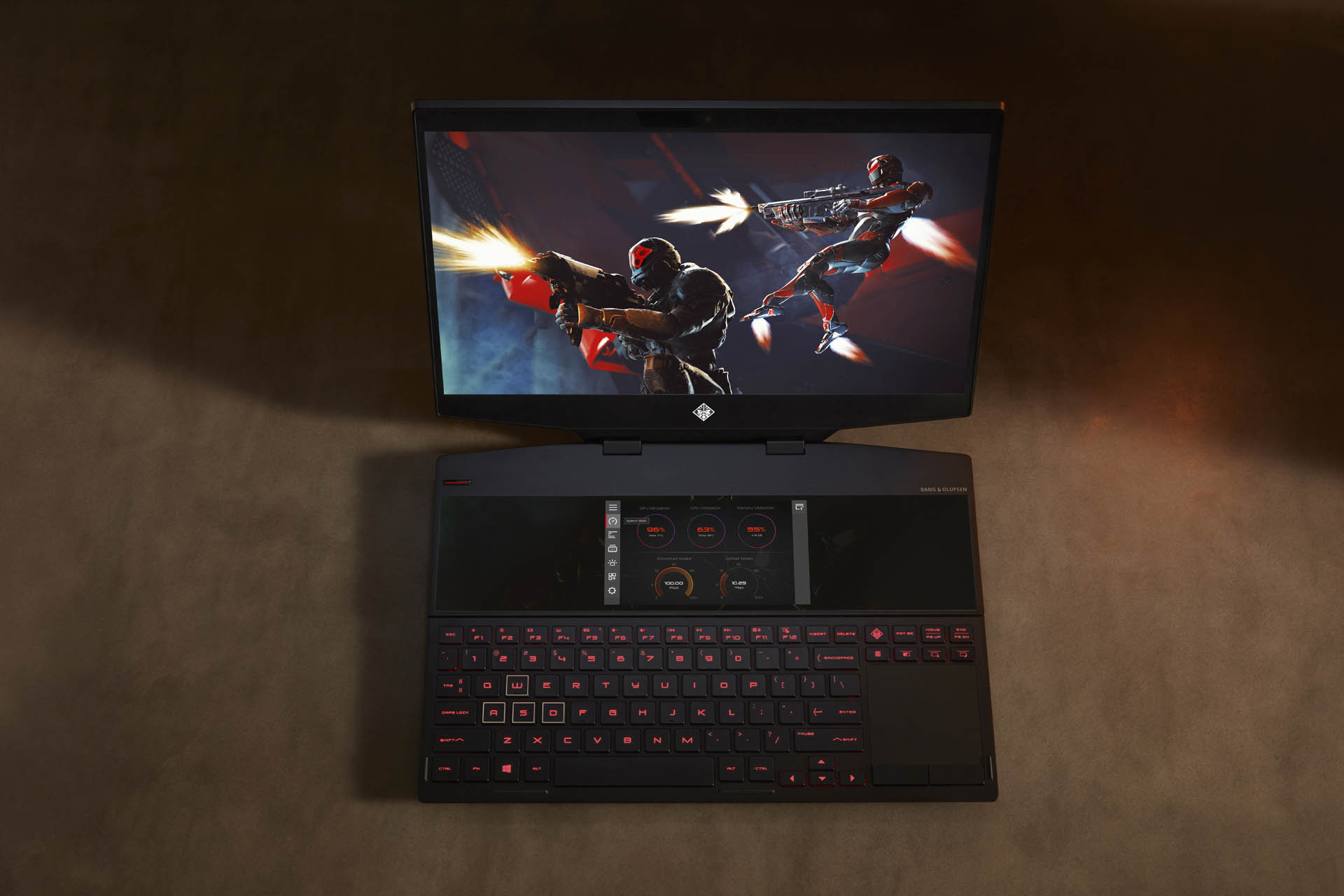 Today at the HP Gaming Festival in Beijing, the company unveiled a powerful lineup of OMEN and HP Pavilion Gaming innovations, raising the bar for gaming experiences.

STG was invited to the virtual showcase where the below PC Gaming innovations from HP Omen were revealed.

With this in mind, HP has added an unprecedented second screen to the OMEN X 2S in the form of an easy-to-use six-inch 1080p touchscreen that lets players message friends in WeChat and WhatsApp, browse in Spotify, watch Twitch and YouTube, or even serve as a hub for OMEN Command Center software. “Pushing the boundaries of what’s possible with game-changing evolutionary and revolutionary products reflects the philosophy of reinvention at HP,” said Kevin Frost, vice president and general manager, Consumer Personal Systems, HP Inc. “The OMEN brand continues to think big and OMEN X 2S is a prime example of how we are setting new standards and changing how a gaming laptop is used.” 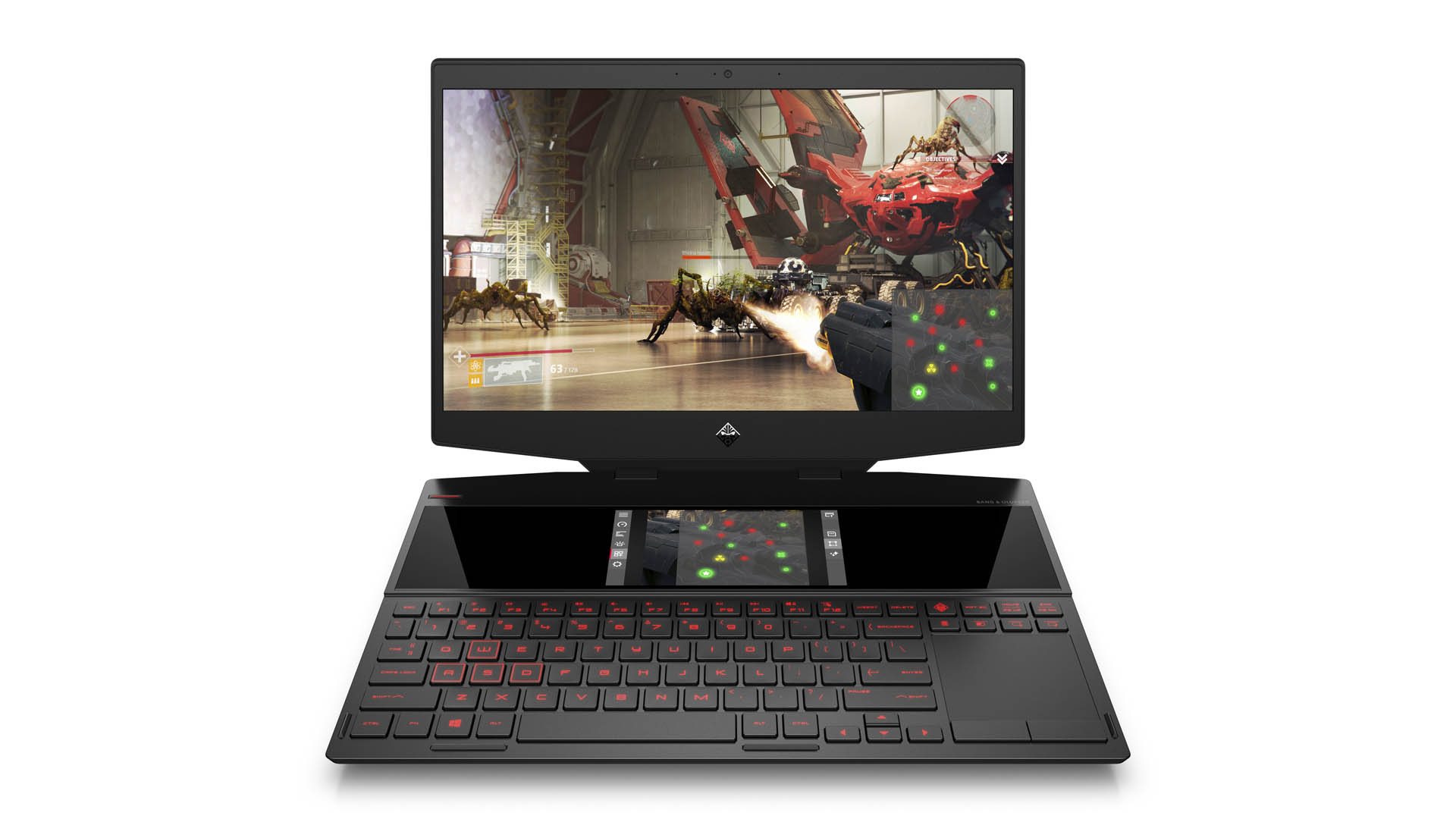 As the world’s first dual-screen gaming laptop, the OMEN X 2S shakes the foundation of what’s expected of a gaming laptop, with tremendous multi-tasking capabilities for various activities and support with dedicated hotkeys. Watching how-to videos while playing, listening to the right song on Spotify while grinding an MMO, or keeping current with Twitch chat or Discord is no longer an alt-tabbing hassle. The OMEN X 2S, further bolstered by a real-time screen mirroring feature that can cut and magnify parts of the main screen – including copying the map portion of a racing game – to the second screen, ensures vision is centered and head movement more vertical than horizontal.

This powerhouse is 20 mm thin with a full metal chassis and is the first 15-inch diagonal gaming laptop in the world to come with an applied liquid metal compound to the thermal system by way of Thermal Grizzly
Conductonaut. The result is phenomenal heat dissipation at 10 times the thermal conductivity of silicon thermal grease, up to a 28 percent frames-per-second (FPS) performance boost over traditional grease when testing in Apex Legends, and an 8.5 percent faster lead time in a Blender Benchmark test. The path to smaller, cooler, and more powerful applies to the newest versions of the OMEN 15 and OMEN 17 laptops. With a 20 percent and 18 percent reduction in thickness over previous versions, they sit at a slim 20 mm and 27 mm thin. 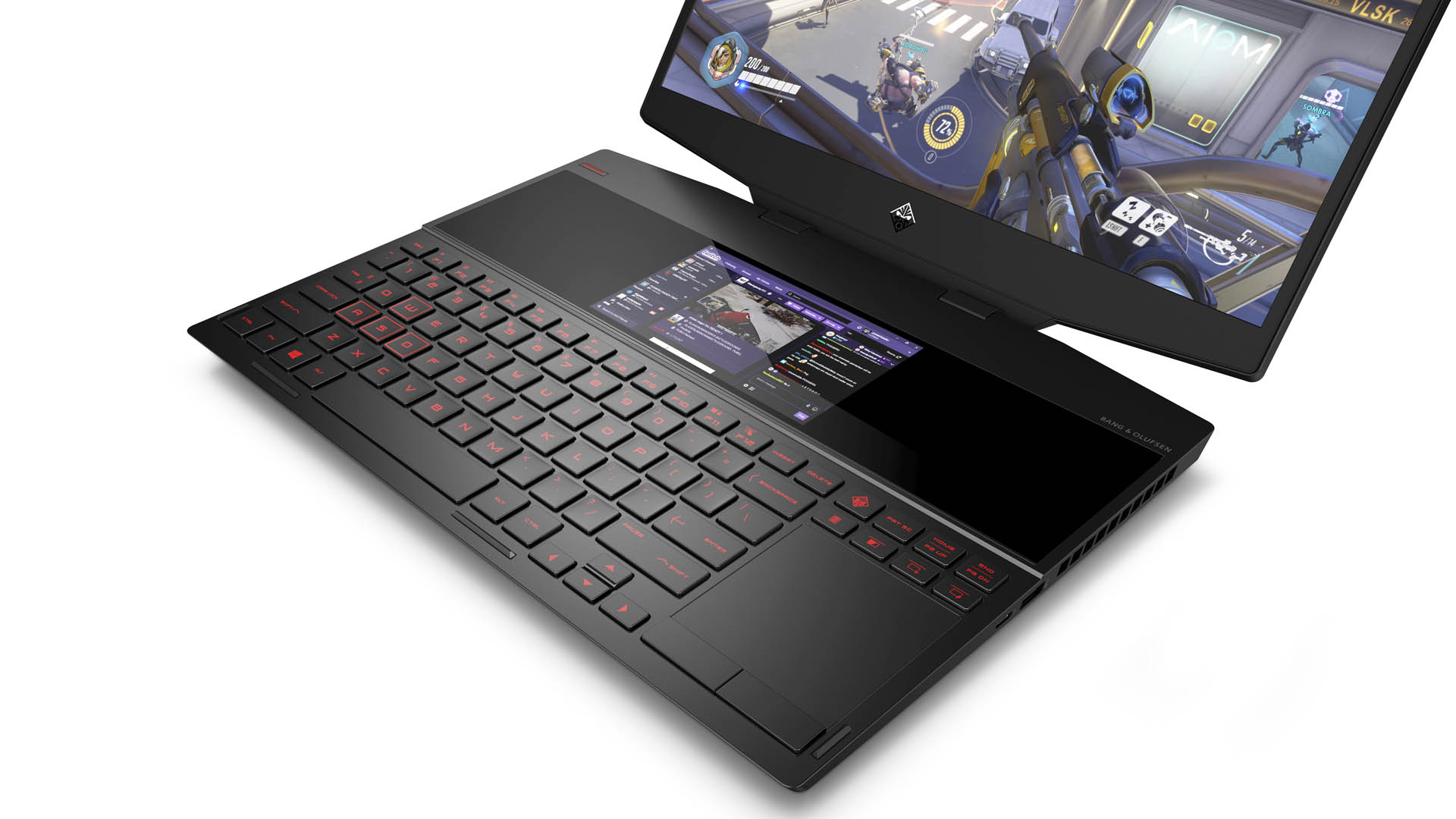 All three laptops feature OMEN Tempest, an overhauled advanced thermal solution powered by a 12V fan, which utilizes three-sided venting to enable five-way airflow to keep things ultra-cool. Realistic visuals are delivered by support for up to NVIDIA GeForce RTX 2080 for the OMEN 17 and features Max-Q 6 design for the OMEN X 2S and OMEN 15. Additionally, multitasking and grand-scale games – which take mountainous resources – have never been smoother, with up to the latest 9th Gen Intel Core i9 high performance mobile processor , powered by up to 5.0 GHz Turbo , eight cores and 16 threads, and up to 32 GB of RAM. Take advantage of the latest in storage technology with options that include the newly announced Intel Optane Memory H10 with Solid State Storage10 . The new Intel Wi-Fi 6 (802.11ax) designed to support gigabit speeds ups the wireless game with up to 3X faster file transfer speeds than Wi-Fi 5(802.11ac).

Top it off with options up to an esports standard 240 Hz refresh rate 1080p display that allows visuals to flow across the screen with viper strike-like speed and NVIDIA G-SYNC on the OMEN X 2S and available on select OMEN 15 and OMEN 17 configurations. OMEN Command Center Updates Since its creation, OMEN Command Center has evolved as the software solution for managing and enhancing gaming hardware. The evolution continues with two additions coming to the platform for all three new OMEN devices. Performance Control cranks up fan RPM to either maximize cooling or performance, based on the chosen setting. The new OMEN Dynamic Power feature manages CPU and GPU wattage based on what a game is utilizing at a given moment to maximize FPS. Combined, these powerful additions serve to improve gameplay while also adding a level of flexibility.

Meticulously crafted to take advantage of the max FPS found in top-tier rigs, and with a sturdy design used in collegiate and professional esports, the OMEN X 25 and OMEN X 25f displays feature micro-edge bezels, one millisecond response times, and NVIDIA G-SYNC and AMD Radeon FreeSync technologies to synchronize industry-leading 240 Hz refresh rates to the GPU and keep visuals unsullied by tearing. The OMEN X 25 is an exceptional tool for climbing the ladder of professional play and can be seen in use by Overwatch League players throughout the 2019 season.

Become a cord breaker with the OMEN Photon Wireless Mouse. With a variety of customization options, including removable rests and 11 customizable buttons, it’s laboriously crafted and includes a tensioning-balance system that ensures effortless optical-mechanical mouse clicks for big and little fingers alike. To address concerns of latency, connectivity, and battery life in wireless mice, OMEN Photon features 2.4 GHz Proactive Wireless Technology, 0.2ms click response time, the ability to charge on any Qi enabled surface, and up to 50 hours of battery life. Constructed with Qi wireless charging capabilities, the OMEN Outpost Mousepad can fully charge the OMEN Photon Mouse in 2.5 hours and works with compatible smartphones. Added adaptability comes in the form of rigorously tested hard and soft anti-fray mat options, which can be selected by simply flipping the mat to the desired side. A USB-A Passthrough port for a wireless dongle and OMEN Command Center customizable RGB LED lighting cement the capabilities of this advanced mousepad. 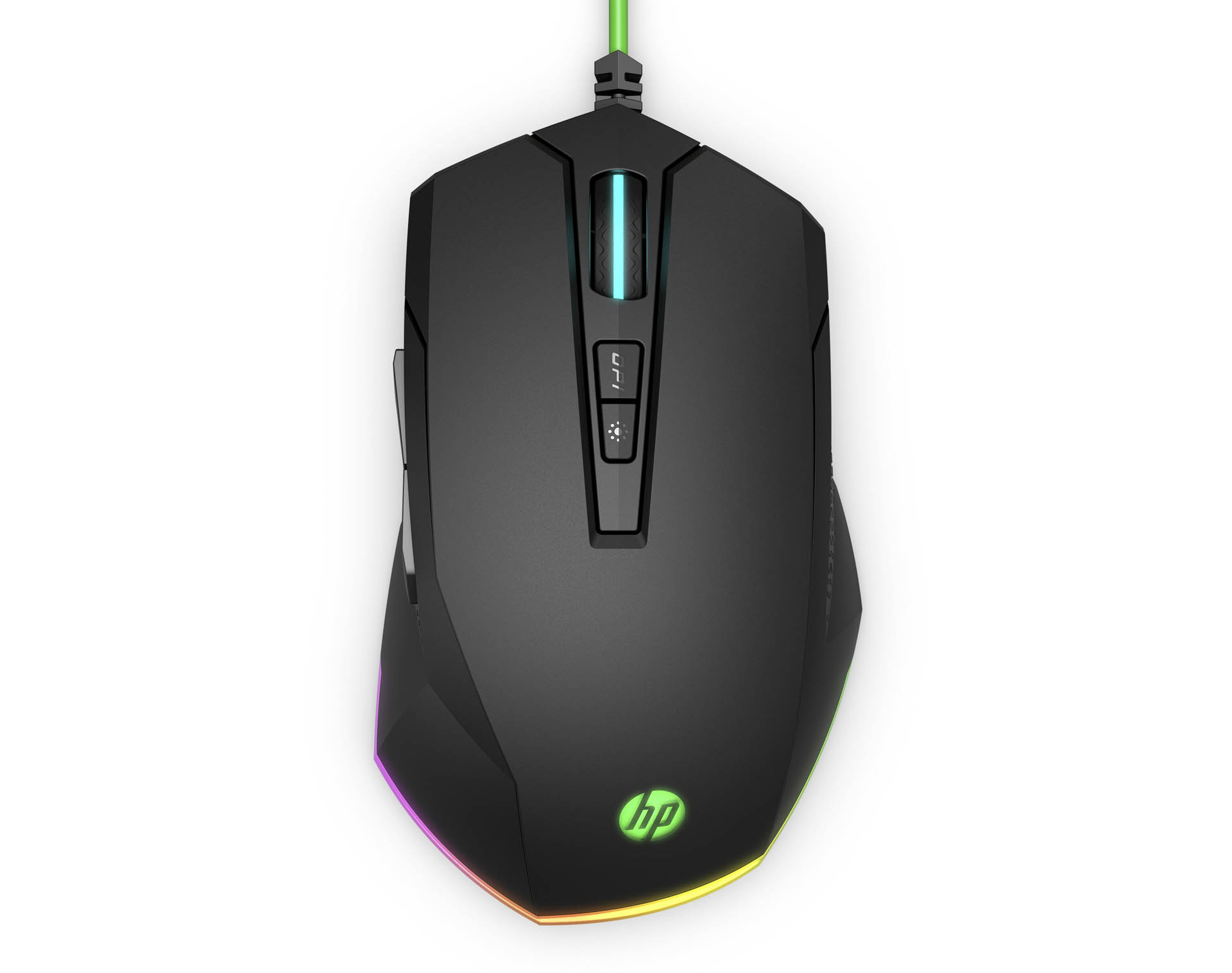 Designed with a thinner frame than before, the latest HP Pavilion Gaming 15 laptop arrives with an eight percent decrease in height over the previous model and is joined by the introduction of the new HP Pavilion Gaming 17 laptop. Technological improvements across the board arrive with options up to the latest 9th Gen Intel Core i5 / i7 high performance mobile CPUs and up to the recently announced NVIDIA GeForce GTX 1660 Ti with Max-Q design. Expertly crafted to yield precise aim and cursor movement along with a variety of customization options such as on-the-fly DPI and RGB lighting effects, the HP Pavilion Gaming Mouse 200 gives users a superb gaming experience. It pairs brilliantly with the HP Pavilion Gaming Mousepad 400, which utilizes a fine-textured anti-fray cloth surface that is optimized for both speed and control playstyles while resting on a rubber base.