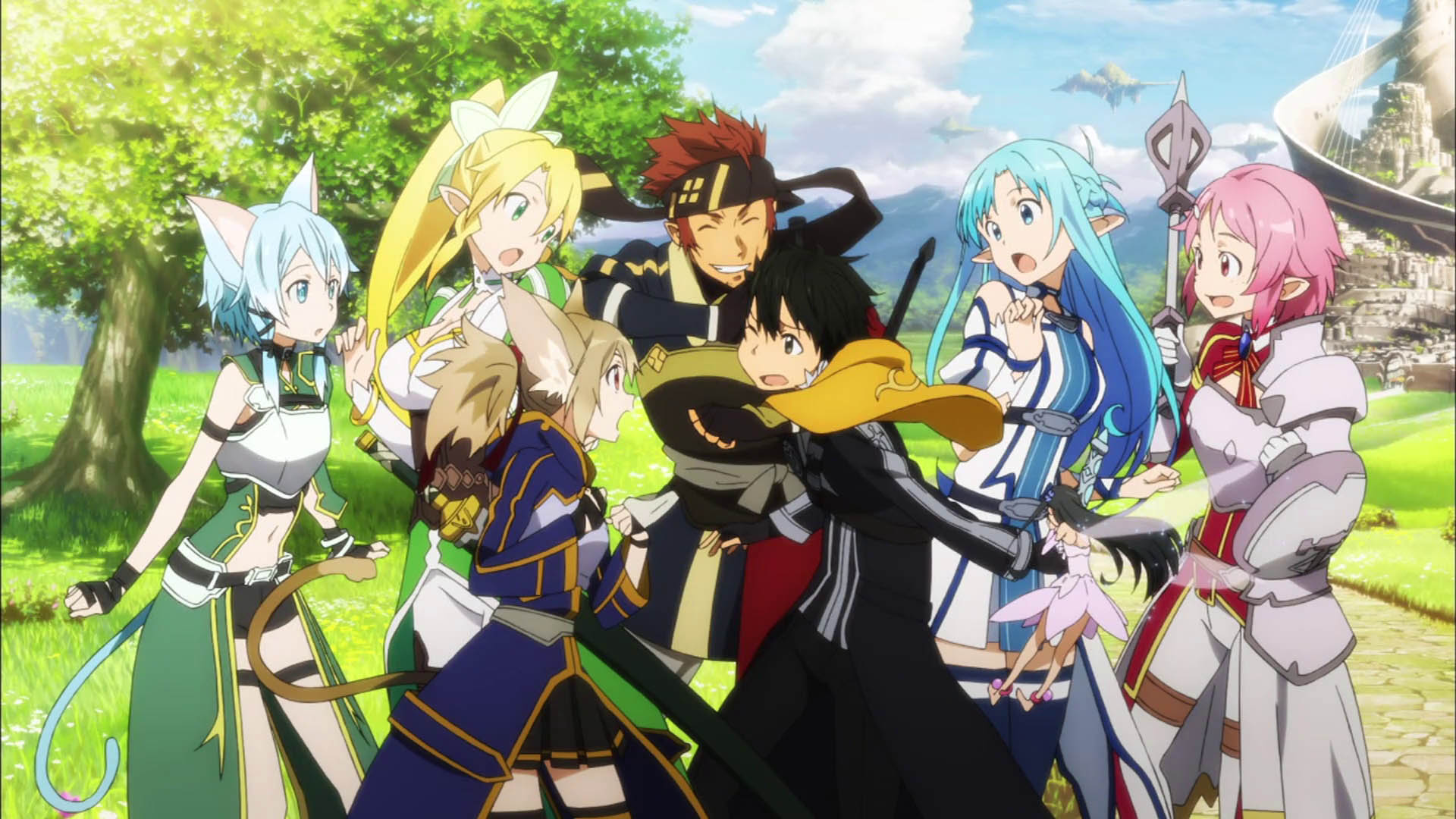 Sword Art Online II is the sequel series to the acclaimed anime, Sword Art Online. Developed by Aniplex and licensed by Madman Entertainment, Sword Art Online II is split into two volumes, much like the first series, with Volume 1 being centred on Gun Gale Online (“GGO”), the latest and most popular sci-fi Virtual Reality Massively Multiplayer Online Role Playing Game (“VRMMORPG”) that has captured the interest of many gamers in the series.

Volume 1 of Sword Art Online II is set a year on from the events of Sword Art Online: Aincrad, and opens with the lead character, Kazuto Kirigaya, more commonly known by his avatar, Kirito, being approached by his contact in the Ministry of Internal Affairs and Communications Department to investigate the murders taking place in game, and consequently in real life, by the mysterious masked man known only as Death Gun. 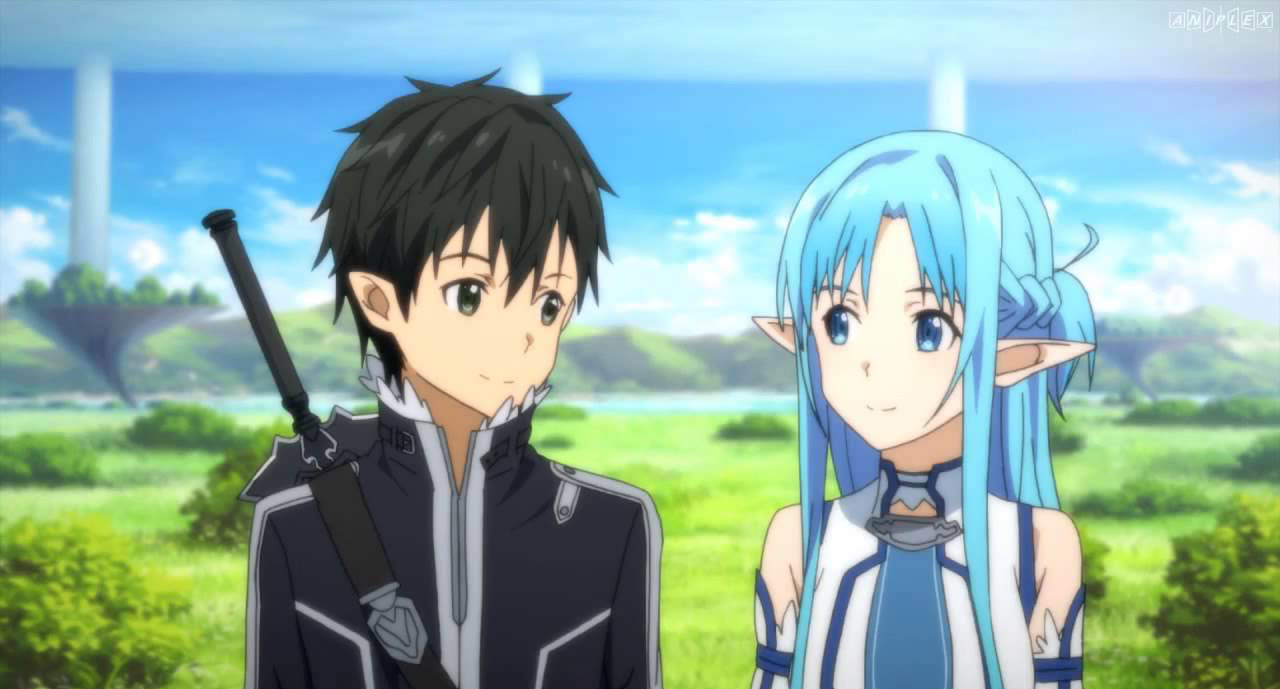 Kirito, being the VRMMORPG master who is unable to resist a challenge, takes up the task and logs into GGO by converting his current player stats from previous VRMMORPG games, only to be uploaded as a girl. It is in this form that he runs into Sinon, an elite sniper and one of the top players of GGO.

Whilst Kirito’s motives are known from the beginning, we come to learn that Sinon, whose real life name is Shino Asada, isn’t as tough as her GGO avatar. Instead, Shino is plagued by an incredible phobia of guns in the real world, having shot a robber in self defence as a child. 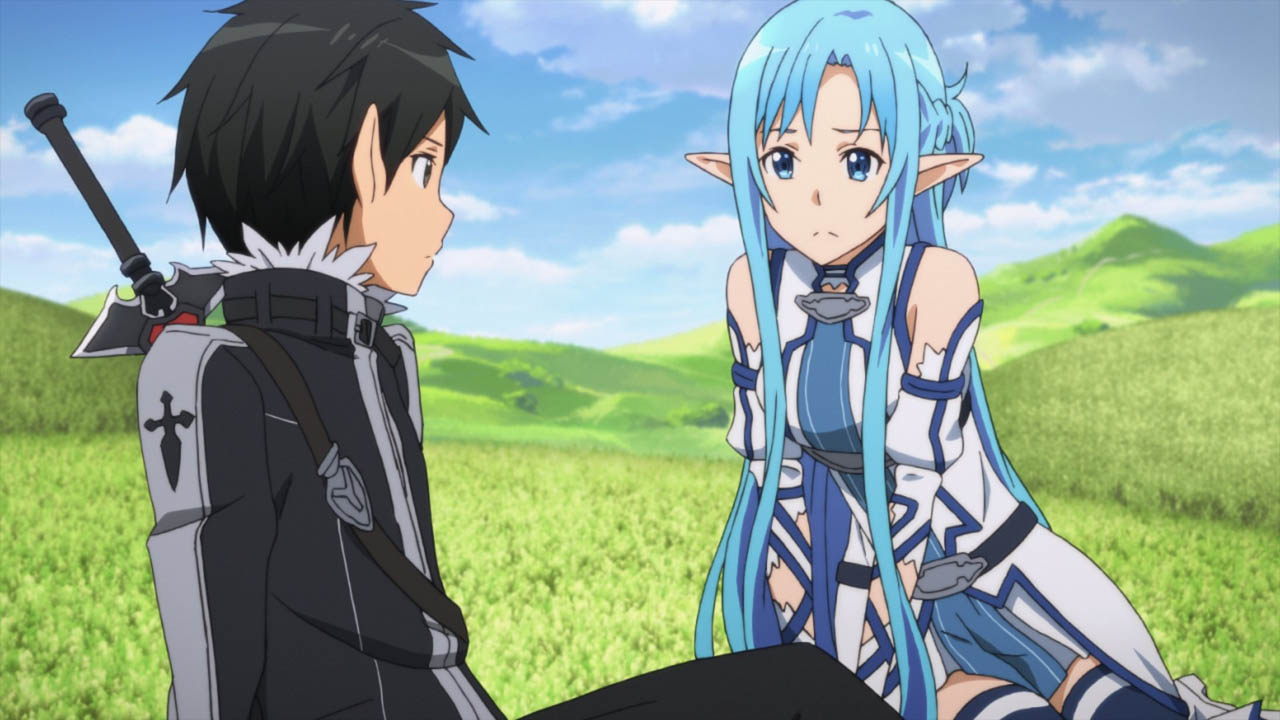 Unlike Aincrad and Fairy Dance (Volume 2 of Sword Art Online), the characters within GGO don’t seem to build relationships with one another. There is no guild, no team and each player is very much out for themselves, especially in the Battle of Bullets tournament, in which both Kirito and Sinon enter, though for very different reasons. Whilst Kirito, being new to the concept of GGO, follows Sinon around and tries to establish some sort of connection and camaraderie  with her in order to better understand the game, Sinon brushes him off and attempts to be the solo player that Kirito had once insisted on being back in his early days playing Sword Art Online. However, this animosity towards Kirito quickly changes when Sinon becomes Death Gun’s next target and the sudden reliance Sinon has on Kirito and the acknowledgement of his power and skill seemed rushed and over-done. 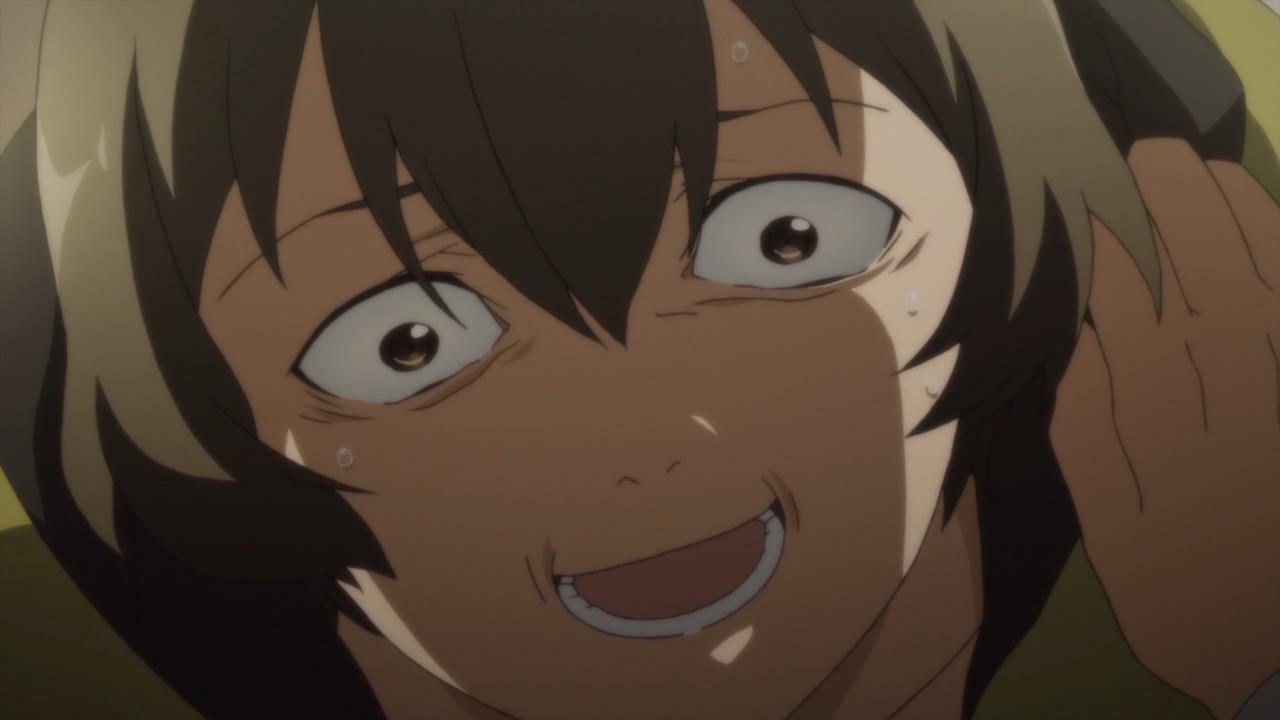 Kirito as a character too seemed overtly dramatised, with his ‘fear’ over Death Gun’s true identity plaguing him. The Kirito in Sword Art Online II appeared too full on and for no real reason compared to the Kirito in Aincrad, whose motive was to finish the game and allow players to log out safely, and the Kirito in Fairy Dance, whose driving force was to save his love, Asuna. It was difficult to connect to Kirito’s motivations in Sword Art Online II due to the fact that references are made to a time in Aincrad that was never shown to viewers. Crucial references to Sword Art Online and Aincrad that links Kirito with Death Gun never existed to viewers, until now. This disparity made it difficult to truly connect with the struggles Kirito faced in trying to remember Death Gun’s identity in Aincrad. 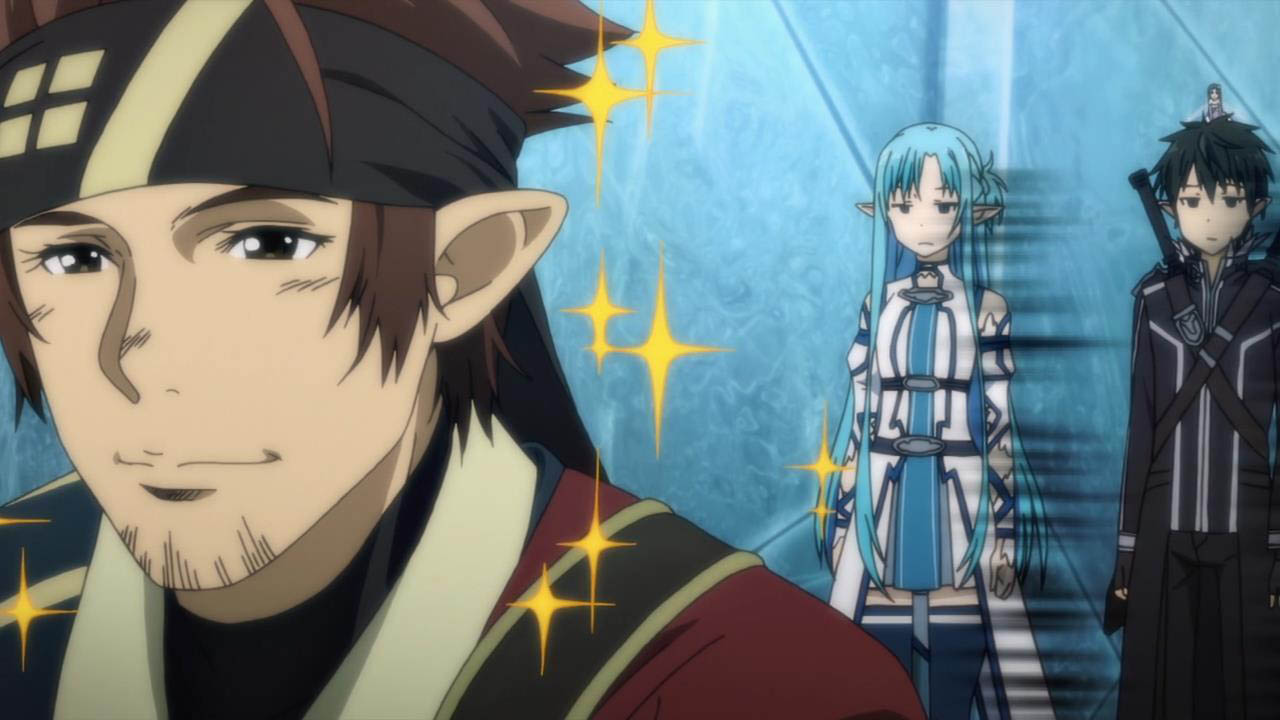 Speaking of Death Gun, I have to admit that for a villain, he is cool. He comes across as Godlike, unable to be defeated, even by the master swordsman, Kirito. If I were playing GGO and came face to face with Death Gun, I would run. Better yet, I would just stop playing and hide under the covers. The person behind Death Gun is revealed in the final two episodes and I have to say, I saw it coming. The very moment his true identity is revealed, things just seem to fall into place and make sense. The writers did a fine job in portraying the person behind Death Gun as being very different from his GGO avatar. Death Gun is smooth, precise and calm, whereas his real life personality is very much boring and childish initially and but is then portrayed as manic, deranged and completely nuts. A true psycho, I suppose. 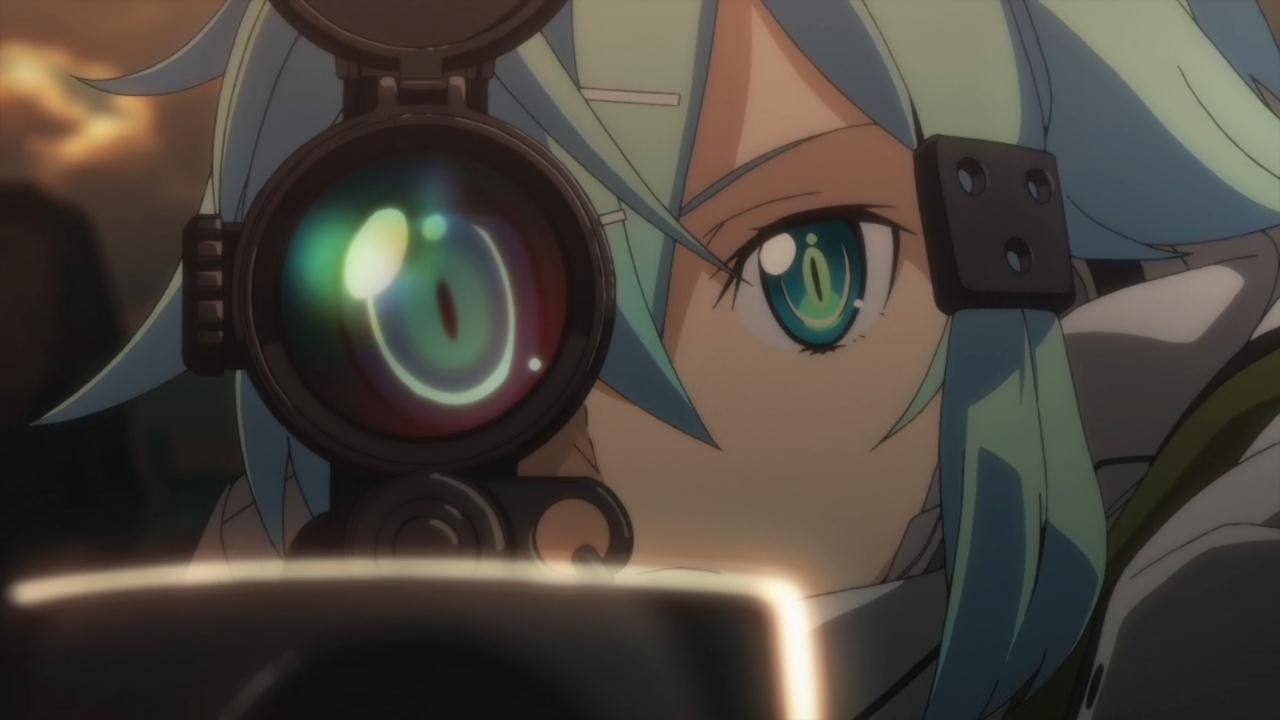 Sword Art Online II definitely had its moments. I thoroughly enjoyed Kirito’s use of what looked like a lightsaber throughout the volume to battle bullets. Only Kirito would bring a sword to a gun fight after all. In fact, I was surprised that the sword was even allowed to be used in the series as not only did it resemble a lightsaber, it sounded like one too. Nevertheless, it was cool and Kirito didn’t disappoint in all of his fight scenes.

The many scenes which zeroed in on Sinon’s flesh made me chuckle slightly, especially bits where the ‘camera’ zoomed in on the top bit of her exposed butt crack. Was that really necessary for the progression of the story? Only in anime do we get ‘exposure’ like that. 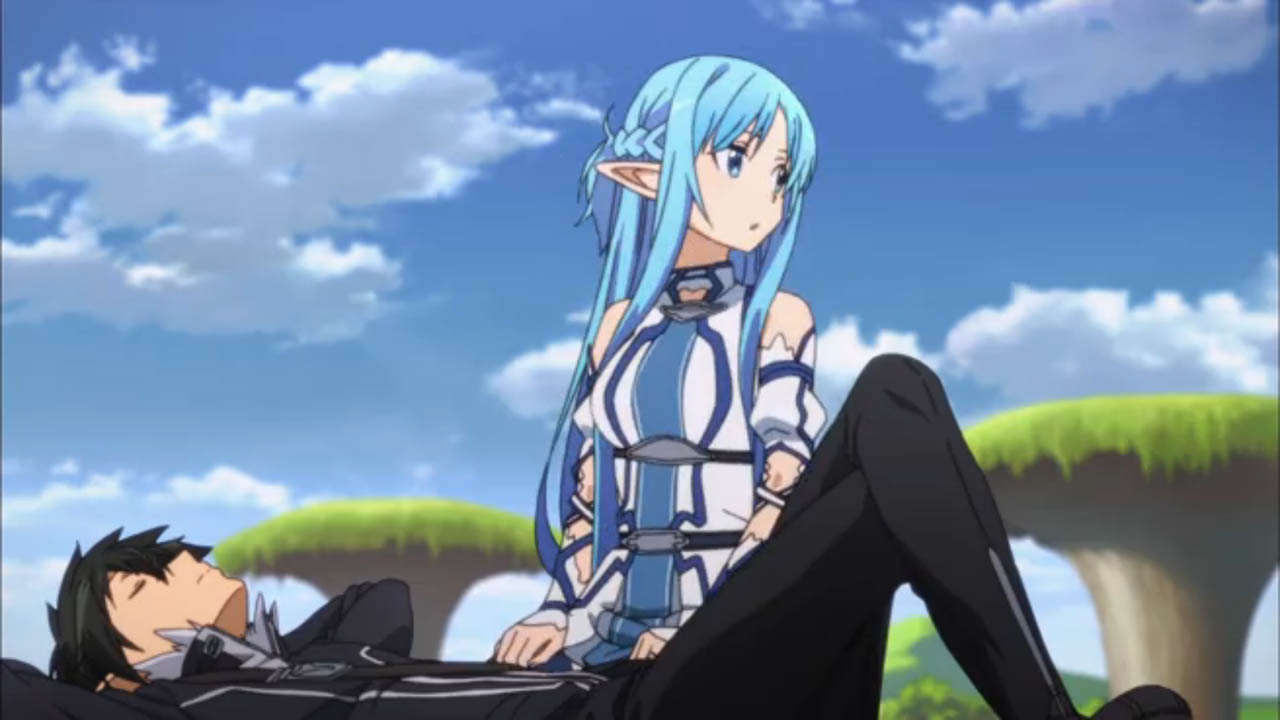 Speaking of exposure, I was disappointed that other notable characters such as Kirito’s girlfriend, Asuna, and younger sister, Suguha, did not get much screen and action time. Asuna and Suguha would have been perfect to actually do some investigation into the real world deaths while Kirito investigates Death Gun in GGO. This would have allowed for at least a bit more depth into the story rather than Kirito figuring everything out on his own. Should he really be that skilled? He had come so far from being a solo player to being a team player only to go back to being solo and ‘almighty’ again. Personally, I prefer the Kirito who worked side by side with partners and actually showed some humility as to his shortcomings. 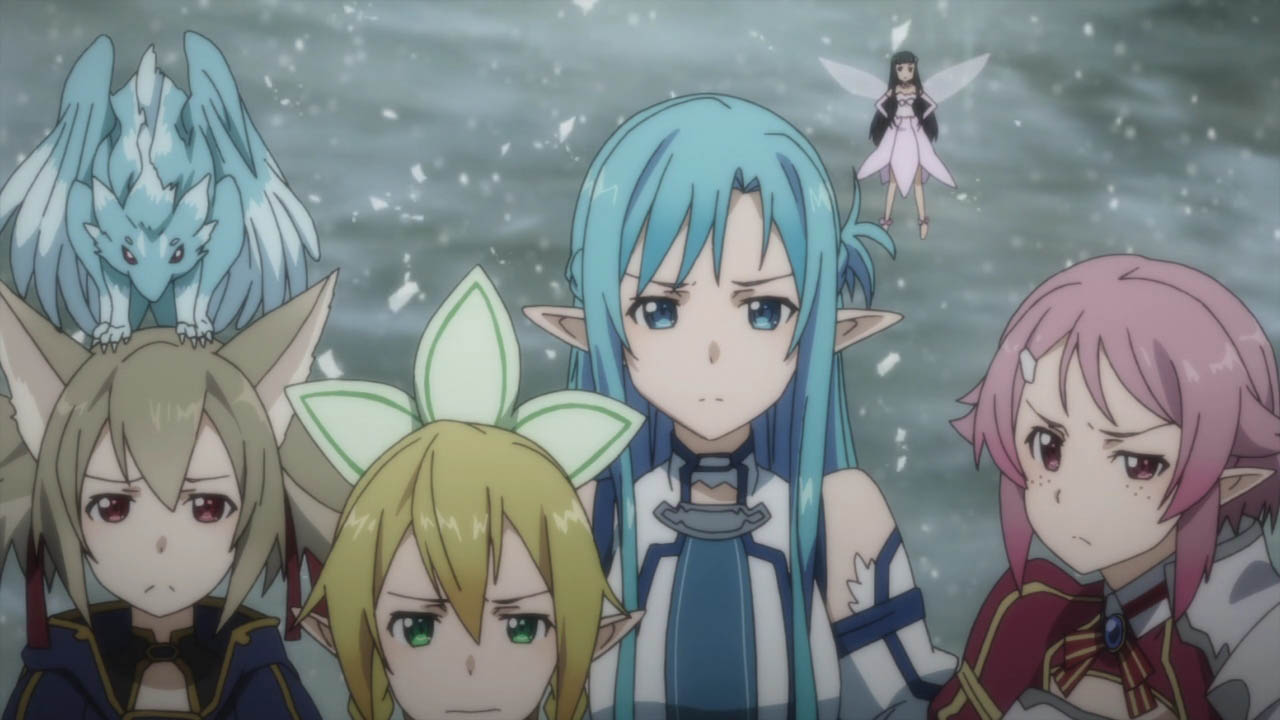 Volume 1 of Sword Art Online II was an interesting watch, no doubt. It entertained as a murder mystery and definitely kept me on my toes but unfortunately, for me, it wasn’t as good and jaw dropping as its predecessor, Sword Art Online. Here’s hoping that Volume 2 will bring back Kirito’s charm and throw in some actual team work and relationship building.