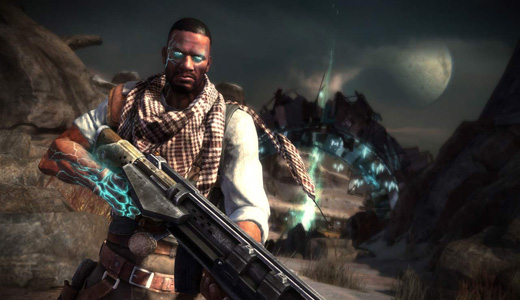 On any ordinary day I wouldn’t be a fan of Real Time Strategy games, the often trial and error, “learn your enemy before any chance of success” nature of the genre tends to bore me into a vacant stupor.

I prefer to move forward 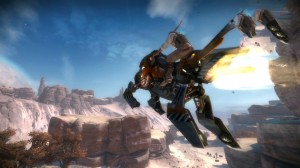 rather than laterally, experiencing new environments, gameplay and story elements at a reasonably brisk pace. But that’s just me, and I had more or less relegated Starhawk to the RTS pile erroneously as it turned out.

It surprised me then to find that before too long that Starhawk had me hooked – And that was before experiencing the meat and veg of the game, competitive multiplayer.

Starhawk is largely a third person action game with “Tower Defense” real time strategy elements thrown in. Such perverse hybrids in the past have often attempted to appeal to both RTS and action fans but resulted in representing neither very well. Starhawk is the exception.

The story itself is a fairly hokum, 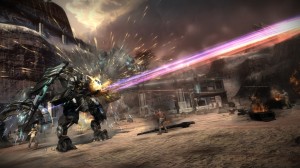 using a western frontier template with all of the necessary trappings of sci-fi space saga. It centers entirely on rift energy, a vaporous blue resource mined largely for fuel. The rift energy is also responsible for the infinite swarm of mutated outcasts – your predominant enemy throughout the campaign.

As Emmett Graves, a partially mutated mercenary for hire, you are commissioned to restore order to the mining industry and eradicate the system of anyone or anything that stands in your way. It provides a contextual setting for the gameplay style but little more.

The campaign is really an elaborate tutorial for the multiplayer, a necessity to gradually introduce and familiarize the player with each component of the online game.

It can largely be broken down into 3 components: flight combat, terrain combat, and building.

Each level tasks the player with completing a series of objectives, often starting out on foot and in land vehicles. There is no cover or dodge mechanic in the game, so the predisposed TPS player may find combat a bit frantic at first. It is, however a welcome nostalgia of fast paced, old school combat. 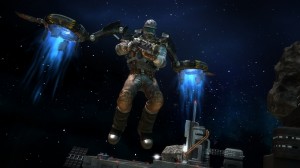 Rift energy is harvested from defeated enemies and become the currency for calling in defensive structures via orbital drop at selected choke points. These structures assist in protecting a certain objective from incrementally challenging waves of enemies.

Sections of the game will also offer a Mech that will offer provide a heavy ground assault but on command can also transform into a Starhawk fighter to take to the skies in aerial, dogfighting combat.

Online multiplayer however is the games Pièce de résistance, accommodating up to 32 players across 10 large maps with a variety of game modes. This is where the teeth cutting exercise of the campaign is really put to the test.

There are typical deathmatch modes, but the best experiences are in the attack and defend modes such as capture the flag and zones. These allow the battlefield to really become your ultimate playground as you create structures at your base in order to swing the pendulum of victory in your team’s direction. 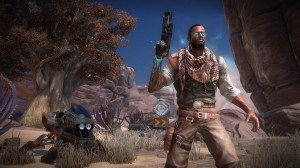 of your opponents attack patterns so you can strategize and apply the limited building resources available to you most effectively. This perhaps is what provides the steepest learning curve, as you are squaring off against human opponents who are mirroring your own tactical reasoning, not found in the campaign.

This makes communication with your team an inherent benefit and not possessing a headset of my own I found myself becoming a bit of a pariah in my team, as I could only contribute on my own terms.

The 10 maps are also littered with vehicles for you and your comrades to man and adds to the glorious mayhem that multiplayer provides. 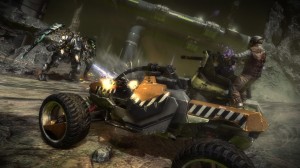 Along with competitive multiplayer, there is also co-op, either via 4 person online or 2 player split screen. This is essentially the best of campaign, and almost exclusively consists of defending a base of increasingly difficult waves of enemies. It provides a bit of fun unto itself, and less overwhelming than versing human counterparts, especially if you are a newbie to this style of gameplay.

Customization is really only cosmetic, and is limited to vehicle decals and character skins but such a game with an infinite web of strategic combat options doesn’t require extensive meta-tweaking like load-outs and perks.

The presentation is nice enough, and can be forgiven for not being the prettiest game on the system when you consider the level of freedom you have within most levels, and how many effects are bombarding the screen at any given moment.

The sound is decent, save perhaps for some of the weapons sounding a tad anemic, but sci-fi bells and whistles accompanied by an unobtrusive score suit the atmosphere to a tee.

To sum up, Starhawk’s 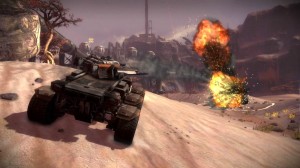 campaign and story serves its purpose but is unremarkable on it’s own. The multiplayer however is fun and frantic and will provide entertainment for a good while. It sets itself apart from all other online multiplayer games and provides the player with a profound and robust competitive experience.

If you are after a multiplayer game that offers something more cerebral than your standard run and gun affair, then you can’t go too far wrong with Starhawk. 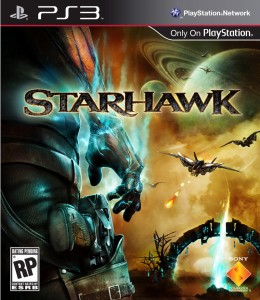