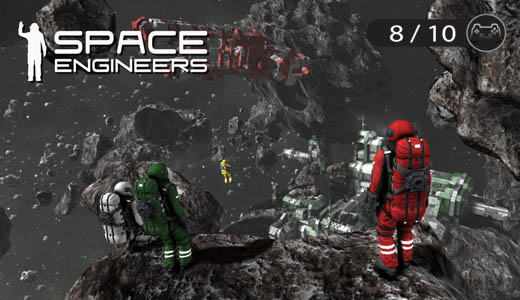 Steam, the bane of my life and my bank balance. What with Steam sales and Humble Bundle offers I’ve over two hundred games on Valve’s game client, most of which I’ve never played.

Every now and again I sit down with one of these “rainy day” games and take them out for a spin. Space Engineers is one of those games. Available as an early access game (whereby developers make available for purchase – at discount rates – games in early stages of development with free updates to the retail version) this “Minecraft in space” isn’t quite as half-baked as some of its peers. 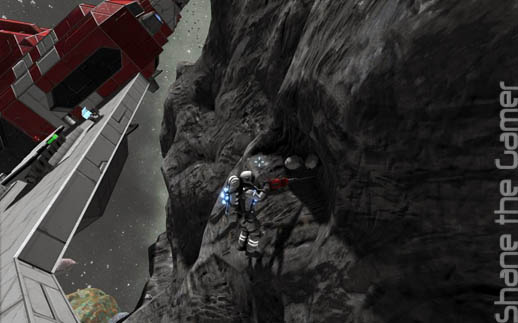 For the game’s initial early access release, would-be players had no more than a physics-based space-sandbox in which to knock-up spaceships. Now the creative mode has been joined by a survival mode whereby you have to mine resources and watch out for meteors (and rocket thrust). There’s even multiplayer. 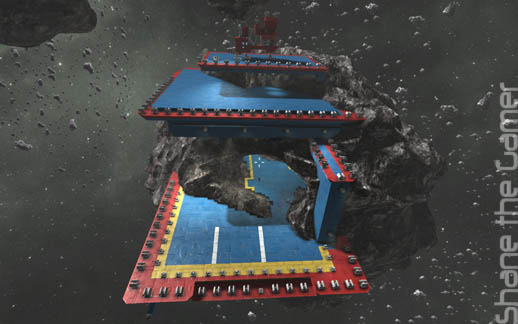 My first attempt at getting to grips with Space Engineers a couple of months ago resulted in five minutes of being perplexed as I floated around a platform attached to a meteorite. Without any prompts and being, immediately at least, more complex than Minecraft I had to put in down until I could find the time to really get into it.

Space Engineers puts the player in control of a solitary space engineer (who can be joined by others if you create a public game). There are a number of scenarios to choose from. Basically you spawn on a platform near an asteroid and depending on your scenario there may or may not be a number of spacecraft nearby. 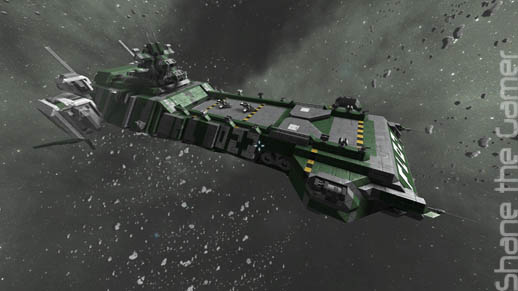 Your space engineer is equipped with a jetpack to get around. But before all that I need to explain exactly how the environment in space engineers works and how you manipulate it. There’s no gravity in deep space and thus none in Space Engineers, so if you knock something it will travel, in theory, forever. 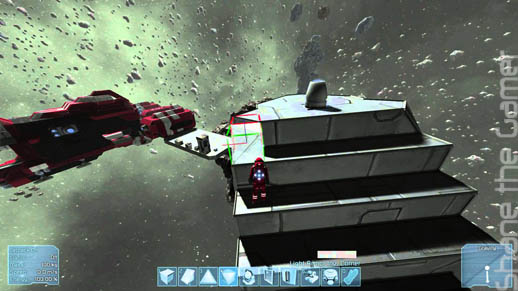 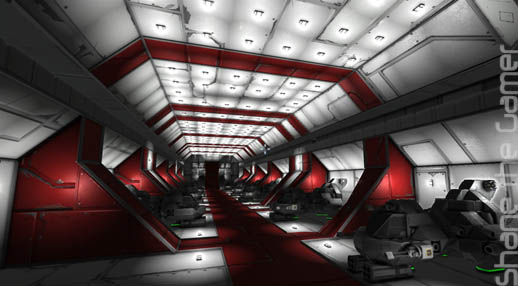 The installation of a gravity generator allows the space engineer to walk normally along the plane that the device is mounted on. If, however, you need to get higher you can switch on your jetpack and fly to wherever you want. You don’t have to worry about overshooting your target ad the jetpack has an integrated inertial damper, which will stop your movement (by firing retro-rockets) when you take your finger of the directional button. Inertial dampening is an important part of spaceship construction that I’ll mention in detail later. 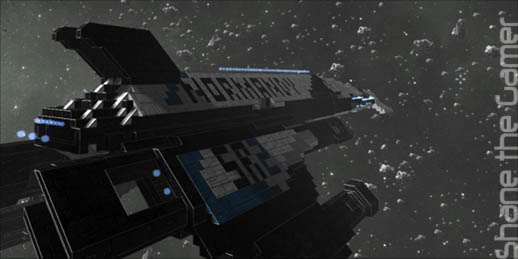 A gravity generator or any other powered component is on no use without a power supply. At the moment the game gives you solar panels and two types of reactor (small or large) for your power. Power is distributed throughout your construct by simply being fixed to the structure. 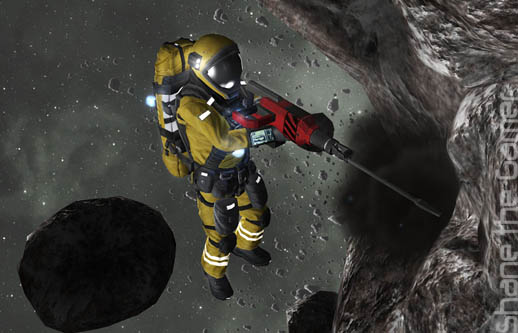 You build things using a variety of different components depending on what you are building. The main component of anything you build is a basic block. You join these together to make your stations, small ships and large ships. There are also doors, windows, grills and a host of custom bits and pieces to give your creations a unique look. 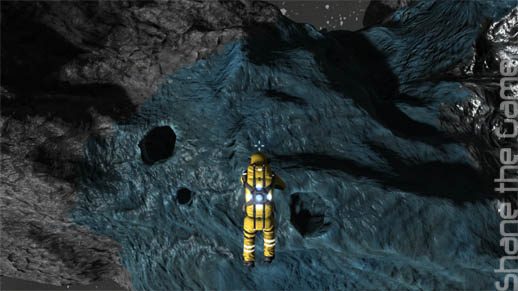 In order to control your construct you are going to need a control panel, for large ships and stations it is exactly that. For small ships you just have a cockpit. From here you can turn your power on or off, switch off your inertial dampening, play with your lights and if you are in you ship, control your movement. 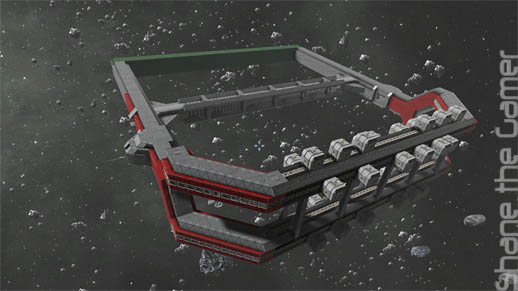 If you want your spaceship to go anywhere you are going to need to install thrusters. Thrusters work in accordance with Newton’s Third Law of Motion, you fire them one way and the spacecraft goes the other way. And of course, because we are in space with no gravity, the thrusters and whatever they are attached to will continue to travel forever unless there’s something to stop them. It’s worth noting that those gravity generators only affect your space engineer, anything else is going to just float away unless it is connected to something. 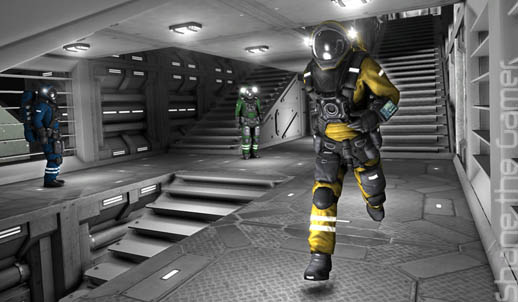 If you want to stop or manoeuvre your spaceship you are going to need to install thrusters in every direction you want to be able to move in. You are even going to need to put some on the front of your spaceship in order brake. With all your thrusters installed you will be able to move about, but it is unlikely that you are going to be able to actually stop your ship. In order to park your ship up you are going to need inertial dampening! And the only way to get it is by installing the last of the main components in Space Engineers: the gyroscope. With this installed you can easily move your ship wherever you want with the thruster automatically firing to adjust and stop your ships movement. 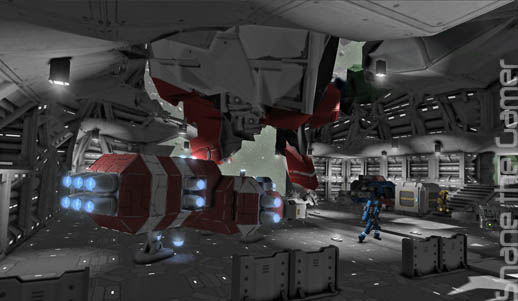 In creative mode you can build a ship in moments. As soon as you start you are given a landing gear on which to build the craft. For there you can simply bolt six thrusters together, one for each movement plane, attach a reactor (and a gravity generator if it’s a large ship), a gyroscope and a control panel/cockpit and you are ready to go. It’s really easy to create something in Space Engineers. From there you can build upon your design adding lights and other features. 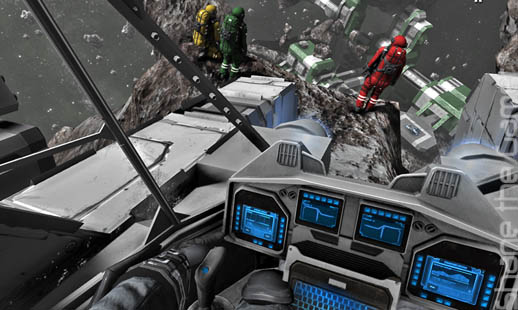 Just as it does with Minecraft, Space Engineer’s creative mode spoils the game somewhat. Up until recently it’s all we’ve had to play with; and in using it the game has pretty-much revealed itself to us. The recently added Survival mode does sort-of take all the fun out of it. 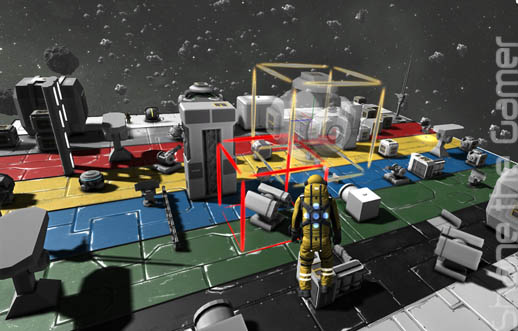 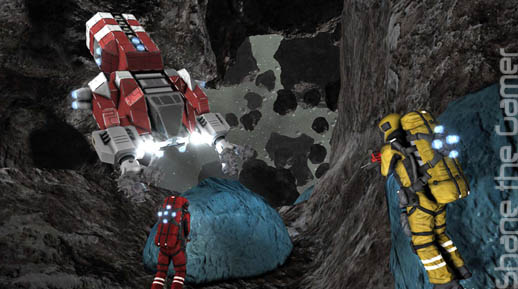 In time you will be able to automate many of the tasks, but I found the micro-management of resource and component creation a little annoying. I much preferred cheating in the sandbox of creative mode over the survival mode. 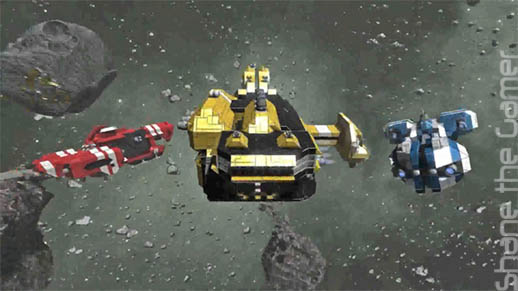 Space Engineers is a work in progress, but it’s definitely worth a punt. The game offers up hours of fun, if only in building spaceships and smashing them up.