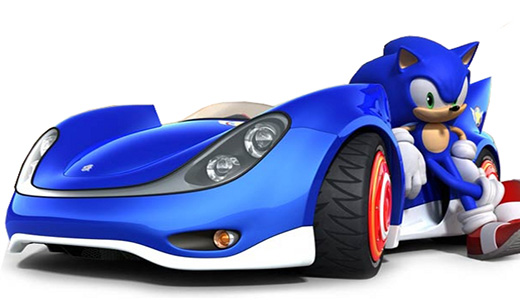 Everyone loves Sonic – that crazy blue hedgehog, running around, having all sorts of whacky adventures at blistering, dizzying speeds that caused controversy in the mid ’90s.

And while his on-foot adventures in gaming have had a history of being a bit of a mixed bag – the original Sonic’s were all excellent, but then he was a werewolf for some reason – his most recent adventure into the world of racing vehicles is, for lack of a better word, fun. Heaps of fun. 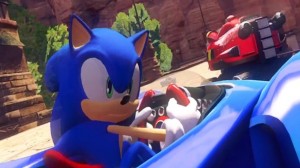 premise of Sonic & All Stars Racing Transformed is a simple one, that you might seem slightly familiar. Characters from a range of different gaming franchises – from Sonic to Crazy Taxi, and even Wreck-It Ralph – come together to race each other across a range of different insane, outlandish, bright and interesting racetracks.

The single player campaign is based around a World Tour mode, and feature Grand Prix, Time Attack and single race modes, all of which work exactly as well as you’d expect them to.

The real draw here though is the multiplayer which is solid online, but amazing if you can convince three friends to huddle round a TV with you and crack into some racing action. 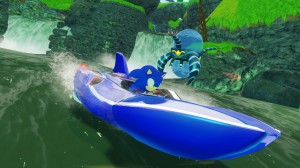 While it’d be easy to write the fact that this game feature multiple characters from different series off as just being a Mario Cart rip-off, there’s a lot more here on offer than you might expect.

At it’s core, it’s a really tight racing game – cars handle well, and there’s enough emphasis on speed to make you feel like your whizzing along just like Sonic would on foot.

Drifting – something that even the most advanced driving games have a habit of getting wrong, works excellently here too, and is as simple as pushing a button. Drifting successfully gets you boost, which adds another level to the feel of speed the game hinges on. 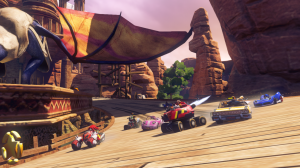 a lot more going on here than just the stock standard racing you might find in something like Need for Speed.

As is the standard in cart racing games, as you move through the courses you collect a range of power-ups to either enhance your own racer or hinder someone else. For the most part, these are well-balanced and a lot of fun to use, but the nature of the upgrades feel closer to Crash Team Racing than it does to Mario Cart – while everyone has their own favorite weapon of choice (I love the wasp swarm), none manage to feel unfairly good, so as to throw off the fairness of the game.

Easily the best part of this game is the fact that your vehicle will transform into either a car or a boat as the design of the track changes. You’ll be speeding along in your car, and suddenly hit water or catapult into the sky, and be transformed into either a jetboat or a plane. 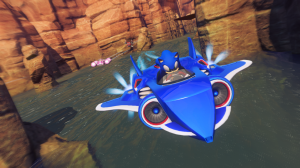 My initial concern was that these changes, while such a brilliantly fun concept, would be shallow, and essentially just be flying cars. This isn’t the case at all – each type of vehicle handles noticeably differently.

The boat dips and fishtails slightly, in a style somewhat reminiscent of that old PS2 classic, and the ability to travel in three dimensions means the plane is a whole different kettle of fish, completely changing the old ‘kart racing’ formula. These environmental effects can even change lap to lap – meaning your second or third lap can end up being a completely different experience from your first.

Graphically, Sonic & All Stars Racing Transformed is a real treat. 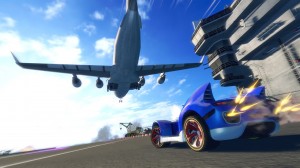 inspired by a range of classic game titles you may or may not be familiar with, is bright, exciting and true to it’s source materials. Each track is excellently put together, and just as challenging as you want it to be, never making you feel like any crashes or failures are because you’re driving badly, not because the track design has mucked you up.

Obviously, this isn’t one to appeal to your hardcore gamers.

Your Gears of War/Battlefield types won’t have picked this one up, but it’s their loss.

If you’re into the more light-hearted racing games, or have a hankering for some good old fashioned nostalgia, this one is a definite win, and one that you could easily get hours of fun out of. 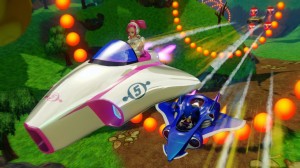 A warning: as was the case with Mario Cart, this one can get very competitive with a group of friends very quickly.

Plus, driving around as Sonic in a car that looks suspiciously like a Dodge Viper that can also turn into a plane as pretty much the combination of everything my ten-year-old self loved.