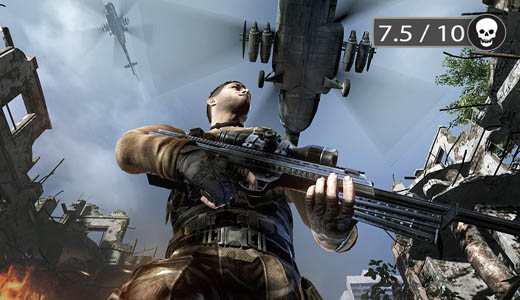 I hate sniping and I hate snipers. When it comes to the likes of Call of Duty, I can use a sniper rifle for toffee. Yet, at the same time, I regularly find myself on the receiving end of a bullet from some sniping little turd camping in the shadows.

Due to the above, I was rather surprised with the amount of fun that I had with 2010’s Sniper: Ghost Warrior which I picked it up during the Steam  Christmas sale. Little did I know that it’d only be a few short months before I’d have the game’s sequel, the aptly titled Sniper: Ghost Warrior 2, in my hands.

Sniper: Ghost Warrior was no slouch in the graphics department; the visuals provided courtesy of the tried and tested Chrome Engine 4 (the same that powers the likes of Call of Juarez and Dead Island). For Sniper 2 the developer, City Interactive, have employed the services of Crytek’s Cry ENGINE 3, the same engine that Crysis 3 runs on. The result is a stunning-looking game with lush vegetation, realistic buildings and beautiful lighting.

The campaign story consists of three acts, each one set in different part of the world. The game starts with players in charge of Cole Anderson, a crack sniper, who is charged with disrupting a bio-weapons deal that is going down in the Philippines. 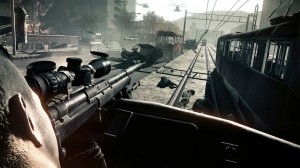 Cue a lush tropical environment, similar to the first game, to ease us in. Unlike the lone-wolf gameplay of the first game, this time Cole is assisted by CIA Special Agent Diaz preforming the role of spotter.

Together Cole and Diaz make their way through the jungle dodging and dispatching bad guys. Being a sniper, the game is all about stealth and setups; to go in gung-ho will end in tears. As the two of them make their way through the levels, Diaz will identify targets and advise on order that they should be dispatched. On the easy and medium settings enemies are highlighted on the HUD and the targets clearly identifiable. On the hard difficulty all the aids are off and you need to pay extra attention to what Diaz is saying. Shot the targets in the wrong order and you’re going to get discovered by the enemy.

Whilst for the most part, the enemy AI were no more than the hapless victims of my mediocre sniping skills, the moment I stuffed up they were on to me. Step into the enemies’ line of sight and they’ll spot you and tell all their mates where you are. This’ll put an end to your carefully planned tactical and stealthy assault. With the enemy alerted to your location they will start to approach your last known position. The only way out is to quickly take them down before they reach you.

I’d like to say that when alerted the enemy tries to flank you, but they don’t quite manage it; instead they sort of run about a bit and stop, usually in the same place, ready for a bullet in the head from your pistol. Sounds worse on paper, as in the midst of a battle when it is all going off, you are just as likely to make a dumb and deadly mistake as the games AI. 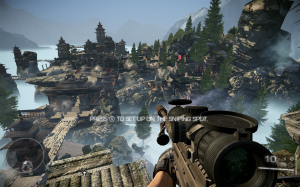 From the present day Philippines in the first act, the second act whizzes us back to the 1990s to find out exactly what the dour reference to the mission being “another Sarajevo” means. This switches the environment to a war-torn urban setting giving the Cry ENGINE another chance to show itself off. The crumbling buildings make an ideal setting for some serious sniping.

You may think that Sniper 2 is a bit of a one trick pony and dull compared to its peers, lacking the vast arsenal of other first-person shooters. It’s not.

City Interactive have packed the game with sufficient variety, enough to ensure that players never get bored.  It’s not all about traveling from A to B, shooting folks on the way. My most memorable moments in the game were when providing allies with assistance from an overlook position. In some cases this was assisting in an assault and in others it was aiding an escape. Whilst prevalent throughout the game, these superb sequences really highlight the level of suspense that taking the role of a sniper imparts on the player. You just don’t get this is sort of tension in a regular action-orientated FPS.

That’s not to say that the game is pedestrian. Yes there is more patience involved, and using binoculars and heat sensors to plan tactics is essential. But when it all goes off, it really does all go off; you’ll find yourself dodging a terrifying hail of bullets that are less forgiving than those in Call of Duty.

Moving on from Sarajevo, the third act brings us back to the present and packs us off to a stunning -looking Nepal, still on the trail of those bio-weapons. All mountain tops and sniper-friendly towers, Nepal provides another unique environment as a backdrop to the game’s conclusion.

Sniper 2’s plot is OK. It is, however, one of the those game where I found myself glazing over during the cut-scenes. The story does a decent enough job of stringing the levels together, but it is pretty forgettable stuff. 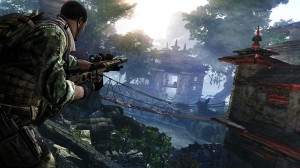 Whilst the environments and missions are all top class, Sniper 2 did feel like it was leading me around by my nose a little more than its predecessor. The levels are, for the most part fairly constrained and linear. I didn’t feel that I have the same level of freedom as I had in the first game.

Carrying over from Sniper: Ghost Warrior is the inclusion of the bullet-cam. As a special treat for particularly long shots or to celebrate the last kill in an arena, the camera follows the trajectory of the bullet to its target; offering up a morbid level of satisfaction that needs to be experience to be properly understood. Watching that bullet spiral in slo-mo towards its unsuspecting target is a joy to behold, a feeling that intensifies as the projectile connects with its victim and makes a mess. I’m not proud to say it, but it just feels so good.

The game controls are the standard FPS faire. It isn’t wise to fire a sniper rifle from the hip, though. As well as taking aim down the sights, you can also hold your breath to steady the shot and enter a sort of slo-mo elevated state of concentration. At this time – on easy and medium settings – a red circle will also appear which is offset from the crosshairs, indicating the bullet trajectory factoring in bullet drop (the effect of gravity on the fired bullet) and wind. On the hard setting players need to adjust their aim, without any aids, by assessing the effect of distance to target and the indicated wind direction on the shot.

As well as the rifle, Cole also has a silenced pistol for those up close and personal moments. For really close kills a knife can be used for stealth attacks from behind. There also infra-red thermal imaging and night vision modes, available when needed, which can be used with the scope and the binoculars. The PC game is fully compatible with a wireless Xbox 360 controller and the right dongle or the wired USB version. PC purists can still stick to the classic keyboard and mouse controls. 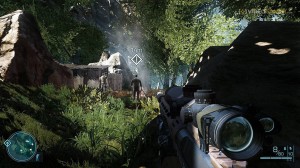 Weighting in at a little over four and a half hours of game time, the single player campaign is a bit on the short side. The release of the single player DLC, Siberian Strike so close to the game’s release adds insult to injury for this rather lean offering. It is even more of a shame as the DLC is rather good fun and addresses my concerns of the linearity of Sniper 2’s campaign missions.

Siberian Strike serves as a prequel to the events in the main campaign;with Cole, again, on the trail of those pesky bioweapons. The much more open Siberian tundra setting allows players to plan their own way through the level without being bossed around by a spotter, similar to the first game.The DLC adds another two hours of gameplay and I’d suggest that it is an essential purchase (at US$10 on the PC via Steam) for owners of the main game, bringing the total single player campaign length up to a more acceptable six and a half hours.

The game’s longevity can also be extended by upping the difficulty.

I’m a casual gamer when it comes to difficulty, opting for the normal or medium setting for the first play through. The medium setting for Sniper 2 is just too easy. All the HUD prompts, highlighting of enemies and that handy little aim adjustment circle that I mentioned earlier, significantly reduce the challenge of being a sniper. To be honest the only challenge on medium difficulty is to your patience.

Nine times out of ten when it went all FUBAR for me it was because I didn’t wait for the right moment to take the shot. That being said the difficult ramps up considerable on hard due to the care needed to adjust your aim for wind and distance. But, the feeling when you hit that target from 720m away in a strong wind without any assistance is pretty good, I can tell you! 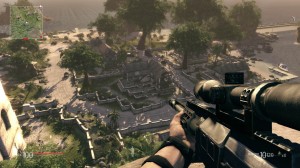 For players wanting to ease that transition from to the high difficulty setting, or for just a bit of practice, Sniper 2 provides a shooting range. From a fixed location overlooking a jungle settlement, players can shoot targets at varying distances. The static targets don’t fire back, so it makes for some good practice on the hard setting at adjusting shots for wind and distance. It is surprising the effect these factors have on aiming. I recommend a few goes on the shooting range before embarking on the hard setting in the campaign.

Lastly there’s the multiplayer mode. Not the most action packed affair, granted; but it does require patience and cunning, traits that FPS games rarely reward players for. As you’d expect with a multiplayer game that only features snipers, there’s a lot of camping going on. All players are basically trying to conceal themselves as must as possible whilst on the lookout for any signs of moment that give their opponents position away. On the PC, I can’t say that the online community is abuzz, but I could always get a game. 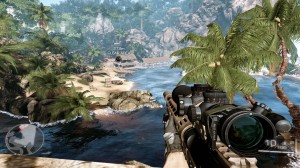 Sniper: Ghost Warrior 2 is definitely a more polished affair than the first game. There is a bit too much hand holding this time and the levels are a little to linear, but overall, and especially on the hard setting I found the game very entertaining. Purchasing the Siberian Strike DLC is a must, for the extended play time and the more open gameplay.

Sniper: Ghost Warrior 2 is a must buy for all fans of sniping and worth a punt for anyone looking for an FPS with a difference.