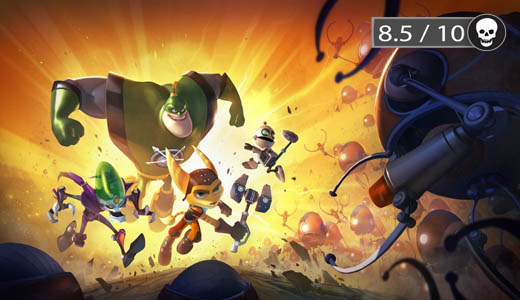 Ratchet and Clank: Nexus is Insomniac’s final instalment on the PlayStation 3 but hopefully this goodbye is to the PS3 and not the series. This third person platform game is probably one of the few left of its kind to keep the genre alive.

Unfortunately, Ratchet and Clank: Nexus isn’t a full length game but it’s not like size matters, it’s how you use it. While offering only a limited number of hours gameplay this game still manages to pack a punch.

Ratchet and Clank is known for its quirky sense of humour and its zany arsenal of weapons. I was excited to see Insomniac really took a step back in time for the greater good, bringing some of the more classic Ratchet and Clank ideas out of the Netherverse. 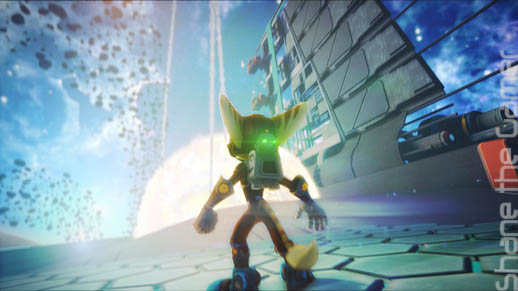 The story mixes old heroes with new villains to bring a fresh yet familiar feel to the game. This along with your typical “saving the galaxy” rigmarole, can’t get any more classic Ratchet and Clank.  The story did play on a deeper level than previous entries, even leaving me with a few more questions than answers.

It may have also been somewhat predictable but alongside the classic humour, the story still managed to keep me very much entertained. Considering the small space of time allowed to tell it, it offers almost everything you can hope for from a Ratchet and Clank game. The music was quite remarkable and resonated with the game wonderfully. The voice acting also portrayed the ideas and feel of a scene really well. 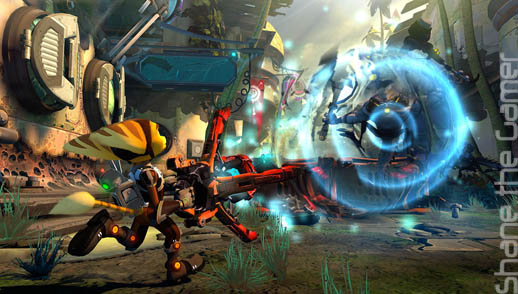 While there are only five worlds on offer, the beautiful and vibrant environments make up for this. Each world tapping into that old school Ratchet feel. Running through the sewers, battling in the arena or saving the city from certain destruction really brought back some memories. Each of the worlds are enjoyable to both explore and interact with. I loved the reactivity of them. Going through certain plant life might see them retract while running into crates will knock them over. Hitting at most glass will see it shatter. It is these little things that help immerse you.

You are armed with your handy wrench, apart from being a very useful tool, is also apparently great for destruction. There are a few improvements with the button layout that helps make fighting more fluent. Accessing the quick Menu to change weapons gives time to plan the next combat moment although this can sometimes ruin your groove. 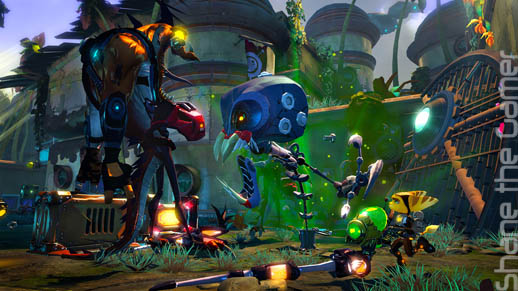 The weapons on offer balance well between whacky and generic shooter style weapons. There is pistol, shotgun and sniper type weapons, as well as some more bizarre weapons thrown into your arsenal. There are in total only 12 weapons available in this game including one of my favourites, the series’ traditional and nefarious RYNO VII. This along with most of the other weapons are still very much fun to use, despite the decrease in variety.

Although the weapon pool may be limited there is still a decent variety of options to take down the enemy; going in commando-style, strafing back ‘n’ forth while exchanging gunfire, stealthily sitting back to snipe down your enemy or getting creative by first terrifying them before turning them all into snowmen, to just mention a few. You can even go all ninja on their asses by wrenching the life out of them. 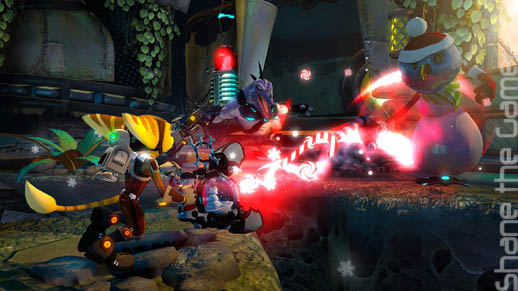 The weapon upgrade system is one of the most well done to date within the Ratchet and Clank games. After buying your weapon you can upgrade specific aspects, such as increased ammo or blast radius, on a grid. With each Level Up of the weapon, more grid blocks are unlocked for purchase. Purchasing squares around special, unknown and highlighted blocks gives a bonus upgrade encouraging you to fully deck out your weapons.

While the initial gameplay is not lengthy Insomniac balances this with replay value, and brings a couple new items to the table.

I found the medium difficulty a bit too easy, so any veteran is recommended to start off on hard. If for whatever reason that didn’t cut it either the Challenge Mode, which is available after completion of the game, definitely brings the rain. 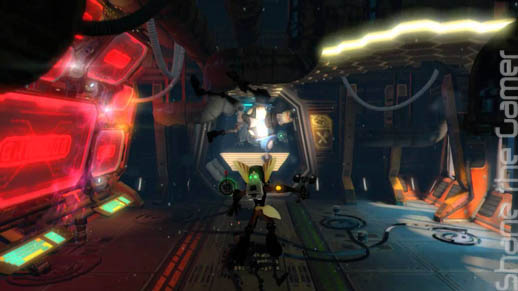 Apart from upping the ante, the second time around play offers some new aspects. After collecting all those Gold Bolts and completing the Skill Points on the first trip, you can now utilise them. Gold Bolts are the currency required for buying the Omega versions of weapons, of which provides further upgrading abilities. Skill points now unlock in game cheats and special effects. So between collectables, unlockables and upgrading this game has plenty to offer on the replay.

But frame rate was an issue – it seemed to drop often enough to be more than noticeable but luckily did not severely impact gameplay. While questing for booty I, on several occasions, found myself stuck between a rock and a hard place, literally. This took some button mashing to escape from but I did manage to push past this and enjoy what is on offer. 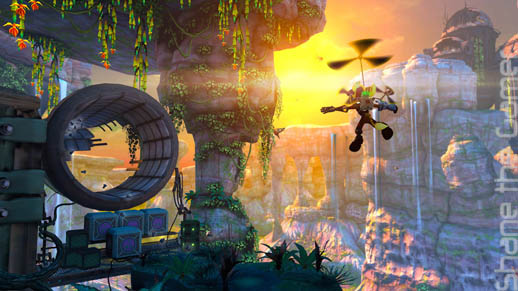 Ratchet and Clank: Nexus will give any fan that sense of nostalgia and will have you wanting to go back and save all those galaxies all over again. If you have never played one of these games this one really sums up the idea of Ratchet and Clank and might just inspire you to explore their history.

Insomniac may have kept it short, but they didn’t slack off on the sweet. From the crazy sense of humour to all the classicness. You can appreciate all the things that have really made the Ratchet and Clank series what they are over the generations and hopefully into the next. So while there are no ground-breaking new ideas, this game really recaptures the old ones.