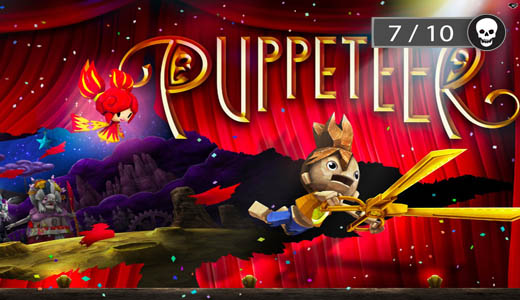 Scissors. ‘Cause sometimes a sword just don’t cut it.

Coming into Puppeteer I had heard very little in regards to what the game was about and what to expect.

I knew it was a family based platformer that seemed to draw heavy inspiration from the Little Big Planet titles, but that was about it. The prospect of a new family game was refreshing, as there seems to be an ongoing trend of games trying to pack in as much violence, gore, and amoral decisions as possible, or re flexing in the opposite direction and churning out boring and uninspired games that parents can look at and be reassured by their “safeness”. Coming from Sony’s own Japan Studio, Puppeteer is ambitious in both its aesthetic and gameplay choices. This doesn’t always work out for the best, but to their credit this game can definitely be described as ambitious. 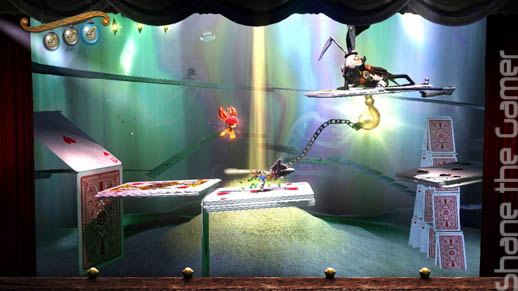 The story of Puppeteer follows (believe it or not) a puppet call Kutaro who has his head eaten by the evil Bear King. Fortunately, being a puppet allows Kutaro to substitute any number of props and items for his head as he goes about defeating the Bear King’s henchmen in order to get his own head back and liberate the world from the tyranny of the Bear King. This story is in no way original; run through a number of levels, defeating the mini-bosses at the end of each one in order to finally defeat the main boss… you win. What does breathe fresh air into this platformer is the level mechanics and overall tone of the game. 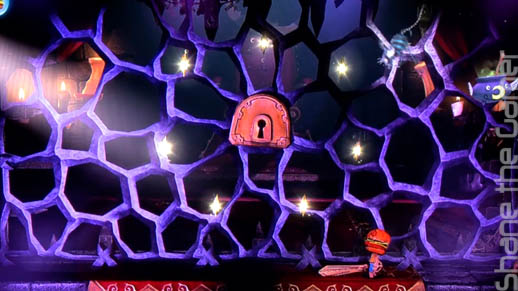 The game unfolds upon a literal on-screen stage with a flair for melodrama and almost pantomime performances by other puppets. Narration is provided by Stephen Greif, which is fantastically British and whimsical, but doesn’t quite compare to the oratory bliss of Stephen Fry from Little Big Planet. While all of this can make for some truly spectacular cutscenes, they are so heavily laden with exposition that their length becomes tedious and results in a detraction from the overall flow of the game. Another downside to the on-stage presentation of Puppeteer is that by framing the entire game within red velvet curtains and acknowledging the audience with their reactionary ‘oooo’s and ‘ahhh’s, the developers are constantly reminding me, the player, that I am only a spectator despite the fact that I am the one controlling the protagonist. During my time playing, I constantly found myself distanced from Kutaro, no longer feeling the danger he faced or the victories he achieved. 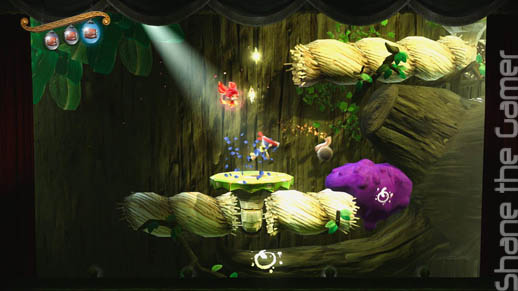 Where this game excels is in its variation of level navigation that sets it apart from others in the platforming genre. Sure, there are the areas to jump to and from, and creeps to avoid or attack, but the use of Kutaro’s weapon, Calibrus – a mystical pair of giant scissors – to navigate in any manner of directions takes this game to a whole new… err, level. The other impressive aspect of Puppeteer is the health mechanic. Instead of health bars, or the fragile life span of someone like Mario, Kutaro’s various heads act as his health. Take a hit and his head pops off, fail to retrieve it and it is gone forever, to be replaced by one of your backups. Run out of lives and it’s game over. This takes the best of both worlds: the challenge of some fragility, while giving you the chance to immediately get your health back if you act quickly. Also, the site of Kutaro chasing his head around a level never failed to amuse. 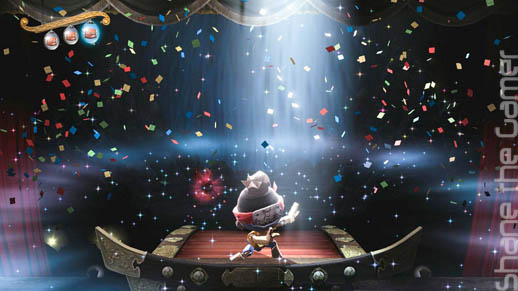 While simple enough, the lack of variety within a level’s combat means that attacks become repetitive very quickly. This does develop as you progress, with bombs available for ranged attacks etc, however I found myself just constantly mashing the square button since my trusty scissors seemed to take down everything with relative ease. The boss fights on the other hand welcome a nice variety to the game’s combat, with different mechanics allowing you to truly flaunt your latest attack. My personal favourite was rescuing the mother and father trees by blasting off toxic sludge with ninja bombs and then hacking apart the rat culprit’s jetpack with my trusty Calibrus. 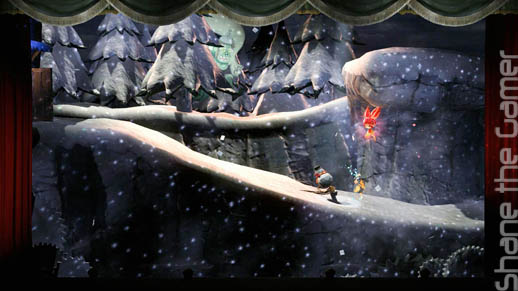 Overall Puppeteer is a solid game, but with a couple of aspects that weren’t quite realised properly. The wealth of different level art, mechanics, and boss fights will keep you occupied for a number of hours, as well as a number of collectibles and hidden levels for replayability.