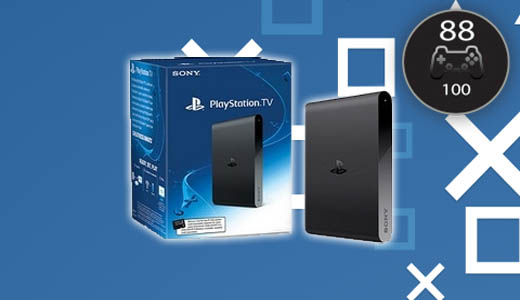 I’d held off getting a PlayStation Vita. I own two PSPs; an original phat one and one of those lighter ones with a better screen. I’ve hardly used either of them.

I love the idea of being able to play games anywhere, but the opportunity to actually do so seldom arises for me. The only time I seemed to use my PSP was waiting in airports and flying on planes.

Outside of those times, when I was a captive audience for the device, the tiny screen and that little thumbstick really didn’t appeal to me that much. I didn’t want to play a game looking at a picture not much bigger than a postage stamp, not when I could have a much better experience on my PS3 or Xbox 360 back home.

I figured I’d have the same issues with the Vita. So, in spite of the larger screen, better graphics and proper dual thumb-sticks, I didn’t bother with it.

When I got my PlayStation 4, I started to thinking about the Vita again and succumbed to purchasing one. I’d used Smart Glass for the Xbox One and a variety of game companion apps on my tablet; I was interested in the second screen functionality of the Vita. I also quite liked the idea of taking my PS4 game around the house and such.

Sadly, the second screen thing didn’t really take off and apart from the occasional go on Killzone Mercenary or using it for a review every now and again, my Vita just collects dust. As a standalone console I have the same problems with the Vita’s screen as I had with the PSP’s, it’s just too bloody small.

In this age where mobile phones have displays the size of your hand and tablets have screens the same size and notebooks. The tiny Vita doesn’t really stand a chance.

But, as the future of the PlayStation Vita hangs in the balance, Sony has launched a device that might just save it.

Sony’s new PlayStation TV is basically a PlayStation Vita that plugs directing into your TV. It’s got no screen, no camera, no thumbsticks and no buttons.

One of these diminutive little devices recently turned up on my doorstep, courtesy of PlayStation AU. So I decided to take it through its paces. 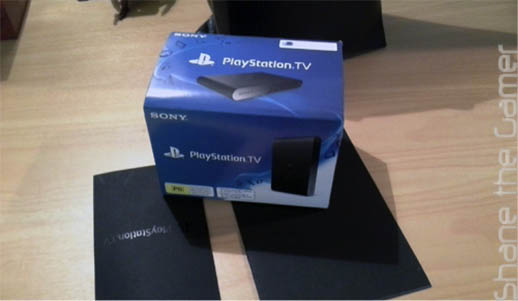 Well, firstly, it’s a small box for a small console. The version received for the review was just the PlayStation TV. Some regions are offering a PS TV + controller bundle, but more on that later. 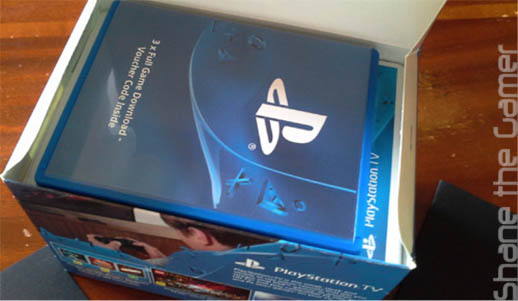 The Australia and New Zealand version of the PlayStation TV comes complete with a code for three full game downloads, Worms Revolution, Velocity and OlliOllie. This may just be a launch promotion, so check with your local retailer. 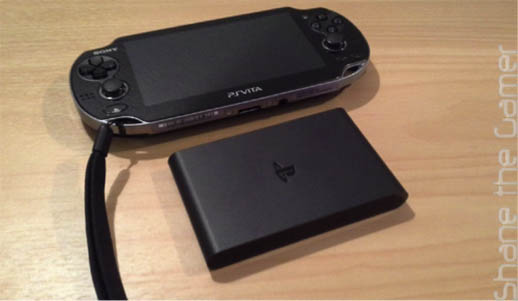 When I said that the PlayStation TV was small, I meant it. This truly micro-console is about the same size as the PlayStation Vita’s screen. As small lumps of black plastic go, I think it looks quite elegant. 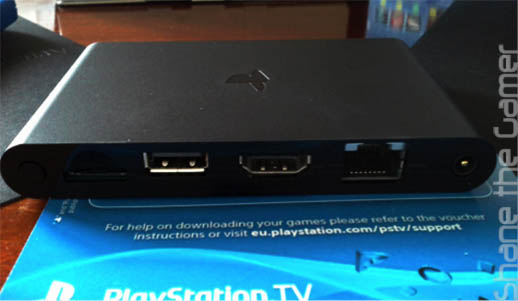 The only reason I think that it needs to be that size is to accommodate all the ports on the back. From left to right you have a slot for a memory stick, a USB port, HDMI socket, a network port and a place to plug in the power cable. The HDMI port means, of course, that the device will only connect to an HDTV. 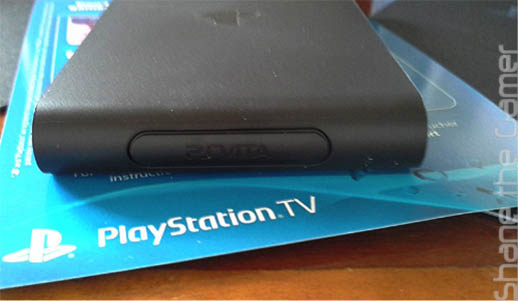 On the right side there’s a removable cover for a Vita game card (or whatever they are called). So if you’ve got a decent collection of Vita games you can slot them in the PlayStation TV and play them on a big screen HDTV. 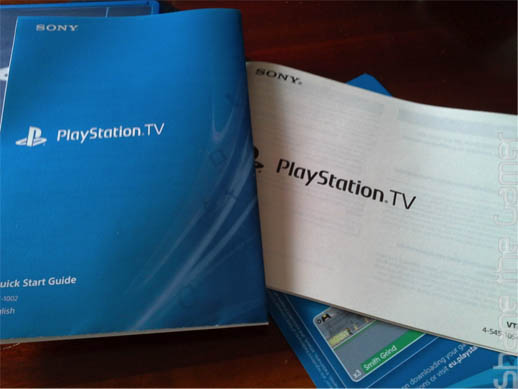 Also in the box is a rather comprehensive quick start guide and the obligatory safety guide. This information should be all you need to set the device up and troubleshoot any problems. 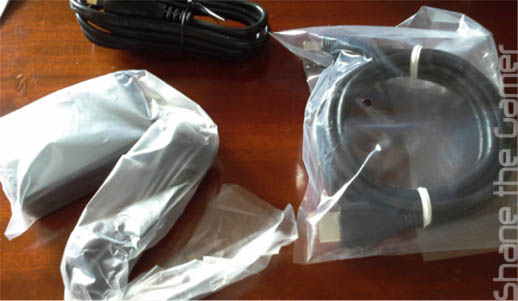 The box also has a transformer and power cord, as well as an HDMI cable- which was good to see. Basically, you get everything you need to get started…well almost everything. 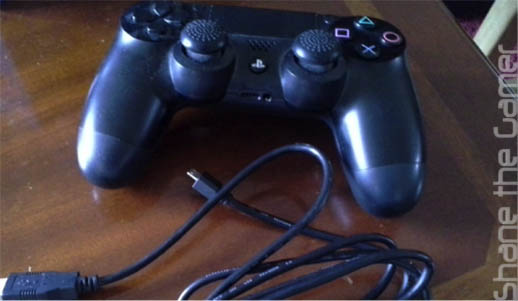 In order to actually use the PlayStation TV you are going to need a PlayStation 3 or a PlayStation 4 wireless controller. If you don’t own a spare controller, make sure that you pick up the PS TV + Dualshock 4 bundle for AU$199. With the PS TV costing AU$150 and a controller costing a further AU$90 you can save a fair bit of money with the bundle. A quick look on the NZ EB Games site suggests that the PS TV is only available on its own for NZ$160, with no bundle for Kiwi gamer. Shop around Kiwis!

Whilst not essential, to get any decent functionality out of the device it may be an idea to invest in a PS Vita memory card. They are not cheap at about AU$100 for 64GB, but the meager 1GB internal memory isn’t going to last very long, especially if you start downloading a full load of games from the PSN Store.

Another optional item is a decent network cable. Whilst the PlayStation TV is Wi-Fi enabled, if you are going to do anything like stream videos from media devices or use PS4 remote play, a cable connection is going to work a whole lot better.

If you plug the network cable straight into your router like I did, the PlayStation TV is going to connect to your network and the internet without any prompts. If you are using Wi-Fi you will need to have your network details handy. 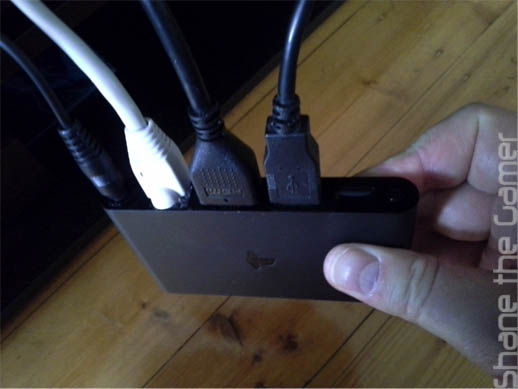 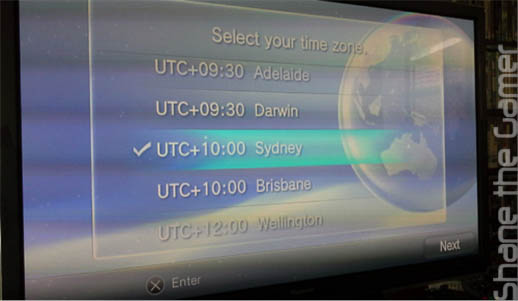 With the power cable in, the PlayStation TV will boot up, asking all the usual language and time zone settings. You are then asked to adjust the display area to fit your TV. There is a little on button on the back right of the device- give that a click if nothing happens. 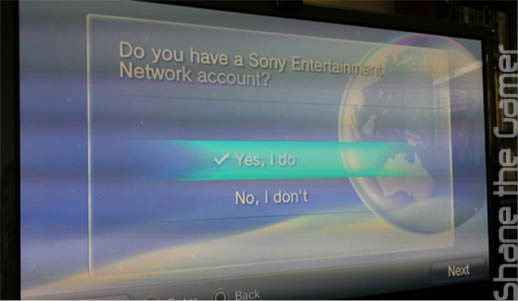 Things start to get interesting when the device asks about your Sony Entertainment Network account. If you’ve got one you’ll want to enter the details here. If you’ve not, you should set one up. Vita owners that have previously purchased and downloaded games from the store will be able to download them onto the PS TV as well for no extra charge- as long as you are logged in with the same PlayStation account. 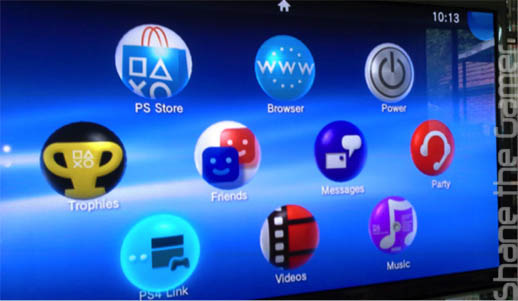 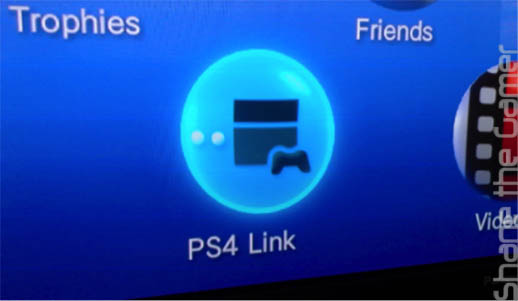 As my review PlayStation 4 is in the office, was particularly keen to test the PlayStation TV’s PS4 Remote Play function. I was looking forward to playing a few of my PS4 games in the lounge. Connecting to a PS4 is slightly different on a PS TV than on a Vita. Quite logically, I suppose, there’s no option to use the PS TV as a PS4 second screen. Clicking the PS4 Link icon takes you straight to the Remote Play connection screen. 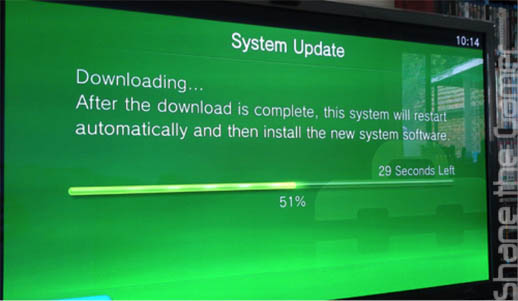 It’s worth mentioning that during this process you may, as I did, get a request to update the software. Just follow the prompts and you’ll be up and running in a jiffy. 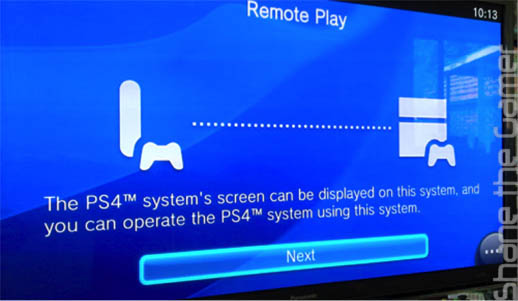 The PlayStation TV takes a few moments to detect the PS4 on the network. Keep an eye on it and make sure it doesn’t start looking for the PS4 on the internet. If it does, check that the PS4 is on (it needs to be in standby to wake up with a Remote Play connection), and that the PS4’s Remote Play settings are correct. One the PlayStation TV finds the PS4 it starts the connection. 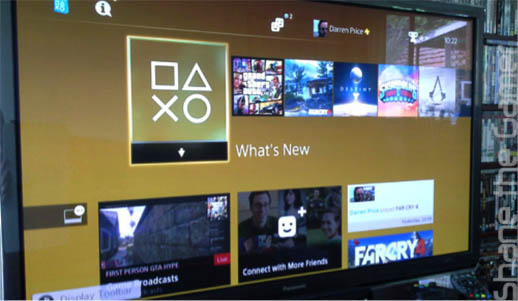 With the PS4 connected to the PS TV, the PS4 can be used on the TV as if it was directly connected. If you are not already aware, what’s actually happening is that the PS4 is streaming the console’s AV signal over your home network. Any issues or bottlenecks in the network are going to affect the quality of the Remote Play experience, particularly- if you are using a Wi-Fi connection, the distance between the router and the PS4. Let’s out how well the PlayStation TV’s Remote Play works with some games. 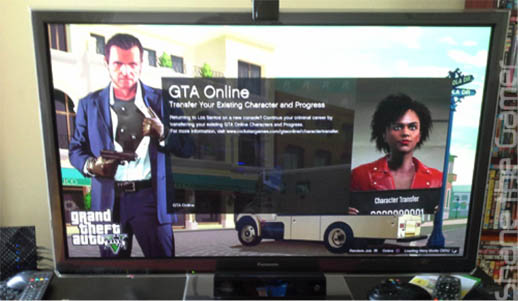 Unfortunately the first game that I tried, Grand Theft Auto V, didn’t work very well with the Remote Play connection. The sound kept on dropping out and the laggy car handling wasn’t really up to the job.

Testing the same game using Remote Play on the Vita yielded a similar result, suggesting it was more about the game’s ability to be remotely played than the PlayStation TV, itself. 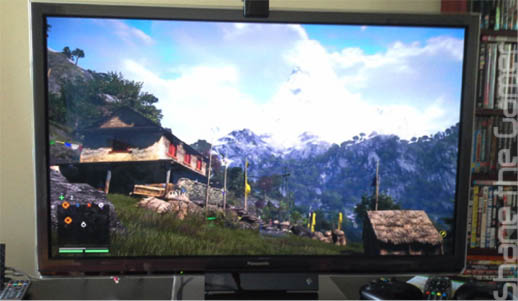 Next up I tried Far Cry 4. Both the sound and display streamed perfectly. I did detect a bit of lag in the controls, making movement and aiming a little harder than when played directly on the PS4. 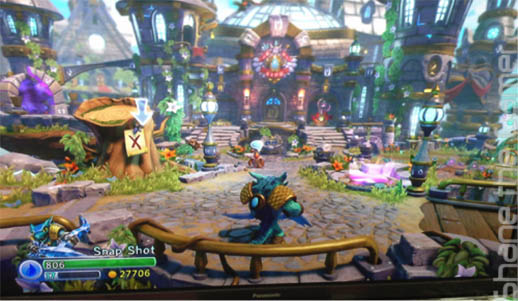 I had a similar control lag problem with Wolfenstein and The Last of Us Remastered. But the relatively non-twitch Skylanders: Trap Team, worked fine. I bit of internet research did reveal a potential fix for my twitch game lag woes. 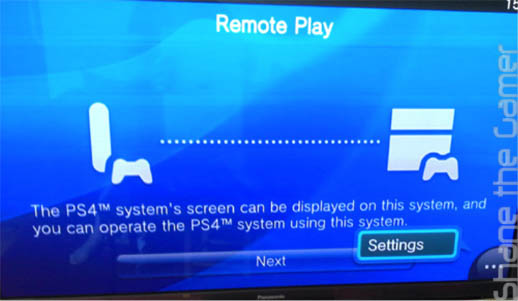 Hidden on the PlayStation TV’s Remote Play screen is a settings option that is not available on the Vita. From here you can chose your video quality setting for PS4 Remote Play, freeing up a bit of bandwidth if you are having connection issues. Whilst I think it did improve the controller lag, it was at the expense of picture quality.

At the end of the day, PS4 Remote Play just about works, but the streaming technology behind it still needs some improvement. It does beg the question of exactly what sort of experience an internet-based streaming service like PlayStation Now would actually provide.

Anyway, what about Vita games? Well this is really the nuts and bolts of the PlayStation TV. With hundreds of PSOne classics, PSP and PS Vita games available to play, there’s no shortage of content to buy and download from the PlayStation Store. 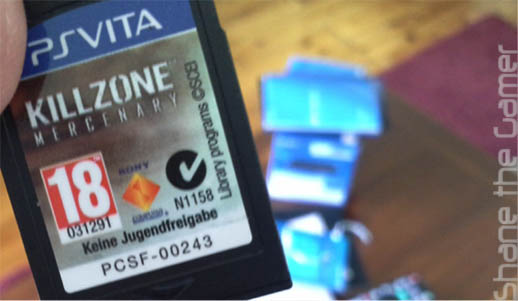 I was keen, however, to check out my favourite PS Vita game, Killzone Mercenary, on the little console. 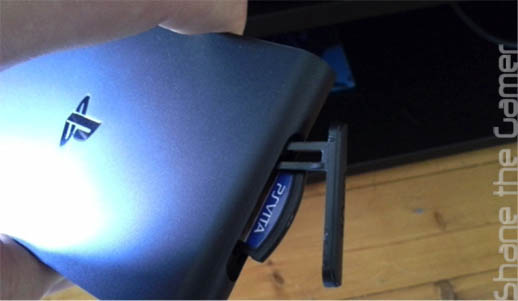 It was a little tricky opening the cover, but once it was the Killzone game card slipped in nicely and the cover clicked back into place.

Before I could play, the title needed an update, possibly to add the required functionality to make it work with the Vita. It’s worth noting that not all PSP/Vita games currently work with the PlayStation TV. Most of them do, but it’s worth checking before you buy a new game. 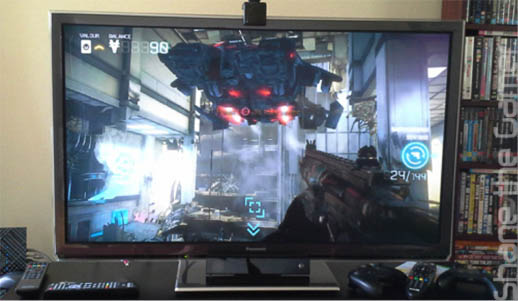 Killzone Mercenary has some fantastic graphics, in my mind too good to be constrained on the Vita’s tiny screen. The game looks fabulous on a big TV. The PlayStation TV does a grand job of upscaling the Vita’s native 960 x 544 picture to 1080p.

Also using the PS4 controller was a breath of fresh air- no touch sensitive rear screen or awkward swiping necessary. It was a bit odd that the aim and fire buttons were the left and right shoulder buttons and not the triggers, but hey. The controller was much better that having to use the Vita’s tiny thumb-sticks.

I’ve only really just scratched the surface with the PlayStation TV. I may not be able to 100% recommend the PS4 Remote Play experience, but that’s not the device’s main selling point. This is a retro gamers dream. With all those games from the PSOne classics like Final Fantasy VII and Tomb Raider, though to the PSP favourites like GTA Liberty City Stories and onto Vita games like Assassin’s Creed Liberation, there’s something for everyone. This is a fantastic little device and really shows off the Vita’s potential in a way that the hand-held console on its own, sadly, never quite seemed to do.

I’d recommend the PlayStation TV to anyone that wants to dip their toes in an immense PlayStation back catalogue going back over twenty-years on a big screen TV from the comfort of their sofa.