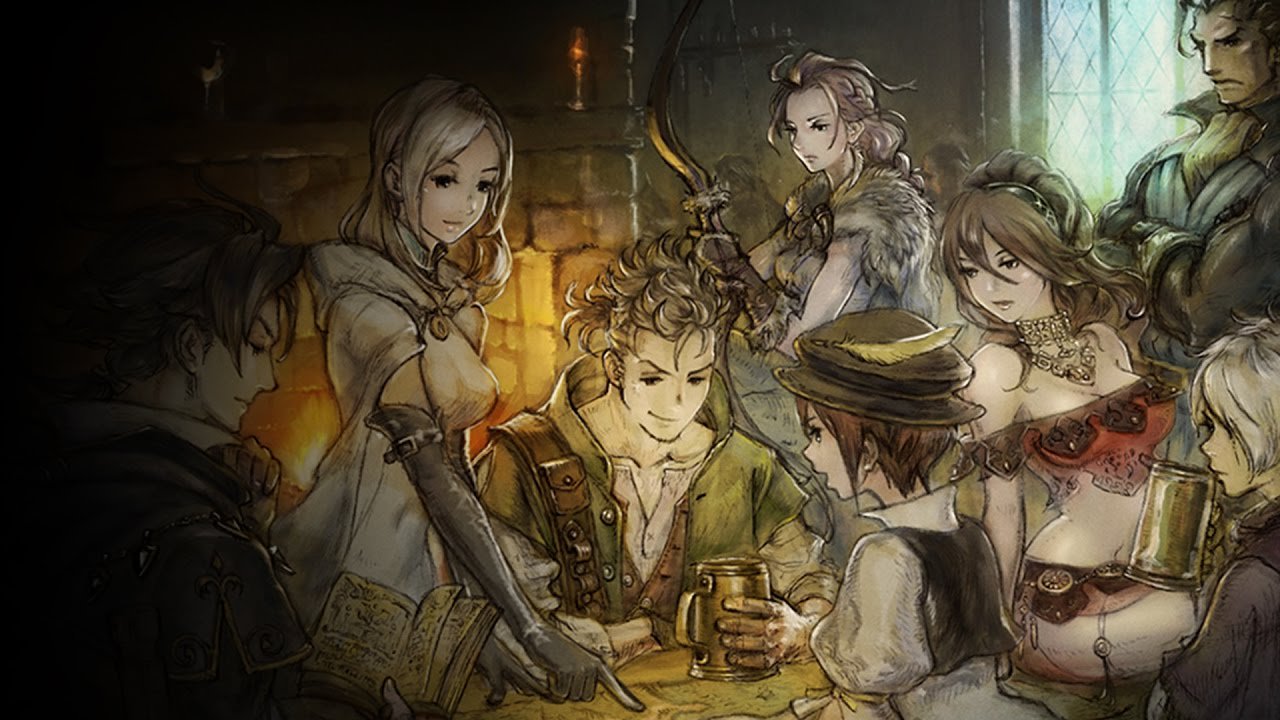 An exclusive, brand new IP from a team with a proven track record?

That’s something any console would wish for, but for the Nintendo Switch it somehow seems especially sweet. Square Enix has tasked the team who looked after Bravely Default and Bravely Second with this challenge. And the fruits of their labours is Octopath Traveller, a sprawling yet compartmentalised JRPG that’s a standout on Nintendo Switch. The director of the game has made the direct comparison between Octoptath Traveller and Final Fantasy 6; a bold claim. So let’s investigate whether it stacks up to those lofty and sets the stage for a whole new franchise, or whether its bark is a bit bigger than its bite.

Octopath Traveller follows the style of Chaucer’s Canterbury Tales. We follow the journeys of eight different characters, each of whom has their own backstory, reasons for setting out on an adventure and internal motivations. There’s dancer Primrose looking for revenge, cleric Ophilia on a pilgrimage, or ex-knight revanchist Olberic. The only one I was actively put off was H’aanit and her broken, forced “ye olde English” writing, which we could have done without. 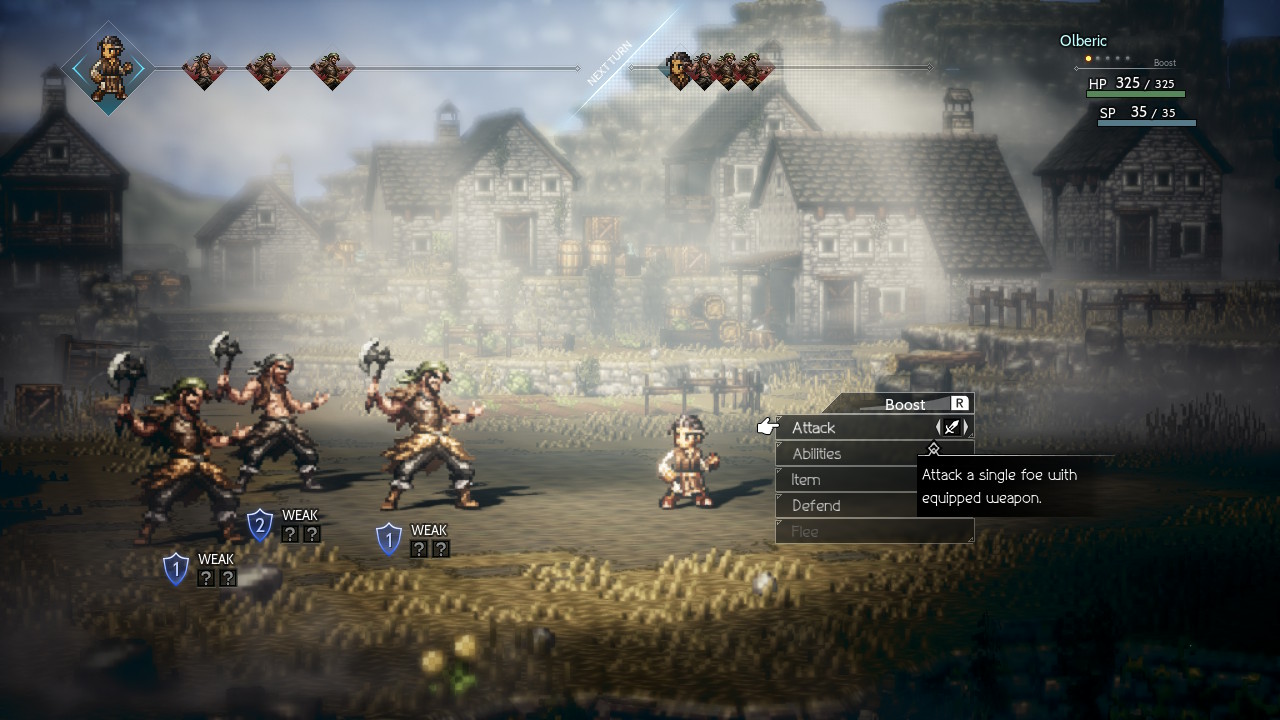 Rather than eight characters interacting with one another, each story is wholly silo’ed off from the rest of the cast. The best way that I can think of describing it is as eight separate stories, told together. Each chapter is exactly the same and follows the exact same structure, it’s just that the scenery is different. Each character has four chapters devoted to each of them, so that’s 32 chapters that are largely the same. The structure is this: Enter a town, find the quest marker, watch a relatively long cutscene, go through a very short “dungeon” which is 90 per cent a linear path and beat a somewhat difficult boss. Then watch another cutscene and walk through a small part of the world to the next town. This structure or loop, which takes about and hour each, makes the game a lot more boring that it deserves, and makes it hard to discern a continuous narrative thread throughout them all.

Each of your characters’ stories though is well written, if predictable. The game explores some mature and thoughtful themes, particularly with Primrose’s first chapter, for example. The upside of going deep on each character rather than a grand journey is that you really get a good sense of who each character is and what their personality is like. Of course, you will have your favourites, but there is no humongously-complicated lore here, which keeps things simpler, something that I appreciated. The stakes were a lot lower than saving the world, but because they were truly personal I felt more connected to the characters, not less. More game would do well to look at and copy Octopath’s example.

And that’s nothing to compare to Octopath’s gorgeous aesthetic presentation. Its unique combination of 2D sprites and basic 3D polygons lend it a handcrafted, paperwork feel and liberal use of tilt-shift-like camera work makes it feel like you’re playing with a diorama. Combined with a great use of depth of field and other advanced effects there’s nothing quite like it out there at the moment, though I hope more games take inspiration from what Square Enix have done.

But the best part of Octopath Traveller is undoubtedly the combat.

While turn-based, class combat doesn’t sound particularly innovative on the face of it, I found its unique spin on this tried-and-true foundation to be compelling and engrossing even many hours in. Essentially its strongly related to the Brave / Default system of Bravely Default and Bravely Second, mixed in with some of the weakness sensibilities of Persona 5. Your usual attacks are relatively weak on their own, and instead you must target a number of vulnerabilities each enemy has, whether that’s to fire, ice, swords, daggers or the like. Hitting your enemy enough times with their weakness will “break” them, leaving them “vulnerable” and stunned, increasing attack damage and depriving them of their turn in combat. This is the key to victory and when combined with multiple enemies, and a full party, its exciting to juggle enemies and win without them even getting a turn (which gives you an experience points bonus). It almost makes combat abilities that don’t target weaknesses moot, as why buff or debuff when you can just put your enemy in a vulnerable state? 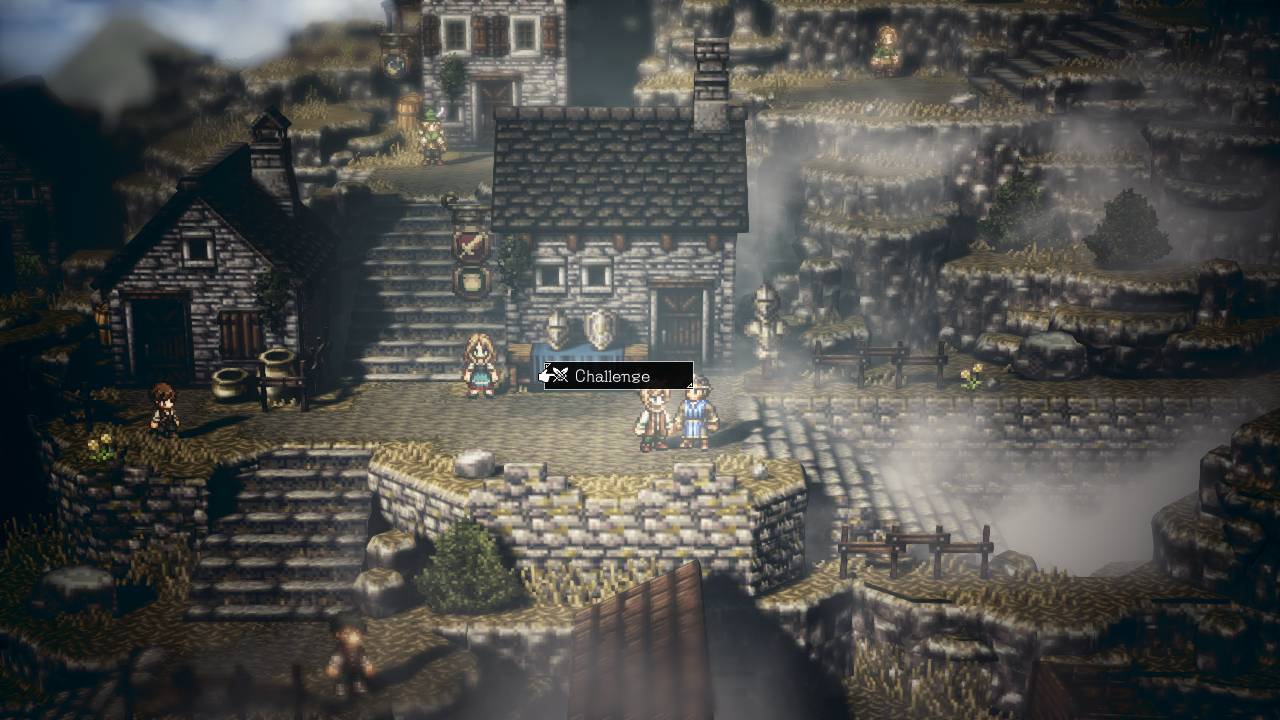 My main criticism of the game is that characters don’t interact with one another. You are able to start with any character and pick up companions in any order, which is a surprising and welcome addition for what are normally very linear JRPGs, but this means that each character is silo’ed off from each other. For example, your party doesn’t appear in cut scenes, only the lead character of that chapter. Its a bit weird sometimes, but if you think of each chapter as a vignette rather than a full journey its a bit more easy to digest.

We first got a brief, intriguing glance at Octopath Traveller right near the Switch’s launch, and since then it has been one of the most hyped games to come to the system. And while it is gorgeous and the combat is unique, its narrative structure leaves much to be desired. Whether or not that structure, with the same exact repeated chapter over and over again is a problem will be up to you. It’s a game best enjoyed in smaller bursts – a chapter here and there hides some of the deficiencies in its design. Nevertheless, Octopath Traveller remains a unique game on the Switch and one of the best JRPG options on Nintendo’s console.

If you’re not sure whether its your cup of tea there’s a lengthy demo that could assuage you (or confirm) of any doubt. So there’s no reason not to try this beautiful world for yourself, and see if any of the eight paths appeal to you. 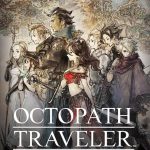