Ni No Kuni: Wrath of the White Witch – Review 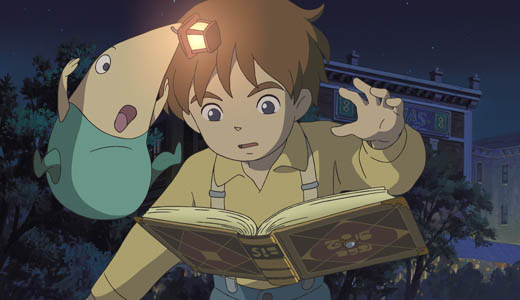 Step foot into another world in Ni No Kuni, where you play as ‘Oliver’ – a young boy who is suddenly met with the tragic loss of his mother, then a series of events which sets him on a magical journey of heroism, with hopes of bringing his mother back to life.

On your journey you are accompanied by the king of fairies called Drippy whose pudgy looks and red lantern nose piercing make for a fun sidekick and funny journey, but he isn’t the only quirky character in Ni No Kuni.

There is a wide variety of unique and somewhat quirky friends and foes which never fail to put a slight grin on your face. 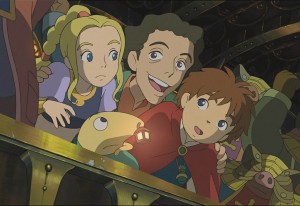 characters isn’t the only thing that will have you glued to the screen.

Ni No Kuni’s storyline and gameplay work very we’ll together. It is by far the best J-RPG I have played which has had me fully immersed, it’s as If I walked into an anime.

The way the story is told through the game is very well done, even the typical walking from here to there to complete Missions or quests in traditional RPG’s doesn’t feel agonizing,

It feels like I am taking a stroll within a magical world, as opposed to it being just a way to progress to the next stage. 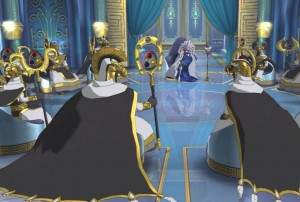 The anime cut scenes in Ni No Kuni are vibrant, lush and just pure awesome, it makes me go into fanboy mode forLevel-5 (the Animators).

The emotion of the characters is very well expressed and the detail in the scenery and background are superb. The voice overs are also top notch.

Vast landscapes and beautiful scenery is to be expected as in most J-RPG’s they have mastered the art of making linear maps with a free roam feel.

They also pay attention to all the little details which make a greater overall experience for example the way Oliver’s cape sways or if there is a change in the environment, you’ll notice the characters reactions will express it, for example, if it’s cold and snowy they shiver and their walking style changes.

layout and GUI is probably one of the most user friendly layouts I have ever used, all the items you acquire are automatically separated into different tabs into your bottomless bag aka inventory which is a god send.

I’m sure most of you would agree that sorting out your inventory in a game is by far one of the most agonizing tasks in any RPG.

The Menu is also setup in a way so that you never neglect things that could help you throughout your journey with only a few thumbnails to choose from you aren’t bombarded with a wall of text and your eyes won’t be busy wondering all over.

Combat is a mix between Pokémon and the Tales series. As with most RPG’s you have HP and MP, HP being your health and MP your Magic/Mana-points used for executing spells/stronger moves. 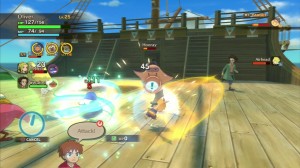 UI is very simple to use with the use of a cog like wheel menu selection on the bottom left and L1 to switch out your familiars/allies in battle.

The only real downside I encountered was that I couldn’t change quickly enough. For example if I were attacking the enemy and suddenly he is charging up to do some colossal damage, I couldn’t change in to defense mode as quickly as I would like to.

If they had made use of some of the other buttons and included some short cuts instead of just using the menu wheel it would have made it a tad better.

Enemy encounters is by far one of the most annoying things in RPG’s, when you run into a monster it suddenly cuts to battle mode. 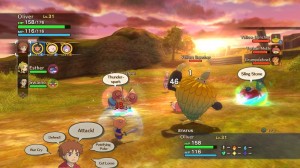 that fighting every monster/enemy is good for Leveling and what not but I know everyone has tried to avoid a monster by running or trying to sneak past it, since you just want to carry on with the main storyline.

But Ni No Kuni has monster awareness which tends to be on both Speed and Steroids. 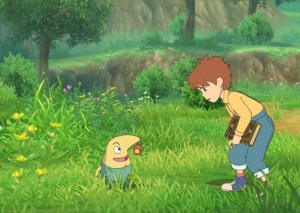 My advice would be turn around before it initiates the fight and gets the first strike, coz 99.99% of the time they will catch you and start a Battle.

In conclusion Ni No Kuni is in my opinion probably one of the best J-RPG’s I have ever played.

It will never fail to surprise you throughout your play and will have you fully immersed into that virtual world.

If you call yourself an RPG fan this is surely a title you do not want to pass on by, to fully understand the genius of this game you must play it!