Need for Speed: Most Wanted – Review 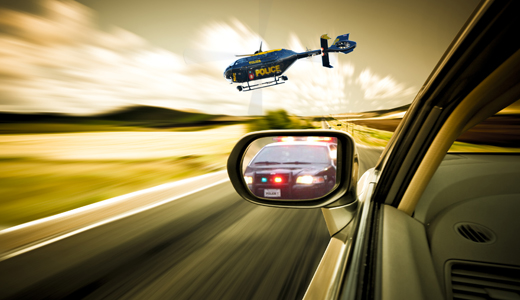 Are you the Most Wanted? Criterion Games, the producers of the hit Burnout series have invited us to be the Most Wanted in their take on the classic Need for Speed title.

A couple of years ago Criterion Games gave EA’s ailing Need for Speed franchise a much needed shot in the arm with the release of Need for Speed: Hot Pursuit. This time they’ve taken the reins of the arcade racing franchise and made it their own.Need for Speed: Most Wanted, is a Burnout game in all but name.

The Burnout series raised the bar for what we expect from an arcade racer. Criterion redefined in-game vehicle crash damage animation and made it an art form; Cars beautifully smashing into pieces in glorious slow-mo, turning what would previously be seen as a fail into adrenalin-fuelled awesomeness. The last Burnout title, Burnout Paradise, took Criterion’s award-winning racing series open world and it’s from there that Need of Speed: Most Wanted takes over. 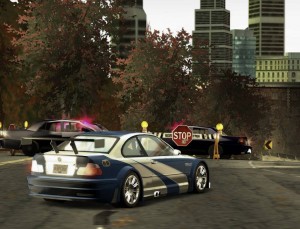 city and surroundings of the fictional Fairhaven, Need for Speed: Most Wanted offers players a vast area to hoon through whilst driving some of the world’s most prestigious car marques. Scattered amongst the lanes, streets and freeways of the single player mode are a variety of different cars, from Fords to Caterhams, all waiting to be jacked. Driving alongside a parked car and simply pressing the Y button transfers you to the car’s driver’s seat. Simple as.

The cars all handle very differently and, depending on your driving style some will drive like a dream and others, well, will take a bit of work in getting used to. For the most part you will easily find yourself drifting around impossibly tight corners at breakneck speed whilst carefully nudging your opponents or police cars into the barriers.

Each car has a series of races which, if finished in the top three, unlock upgrades such as nitrous, tyre and body enhancements. That makes for a massive amount of races. But the races aren’t just the usual beat the other cars to the finish. This is Most Wanted and the local law enforcement will stop at nothing to shut the races down, add an element of chaos to the proceeding. Even after the race is over the police will remain in pursuit until you evade them. 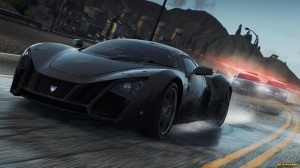 And if the cops are not enough to contend with, Most Wanted’s street races take place on open roads complete with other, blissfully unaware drivers who can so easily become collateral damage. It is one of these doddering old drivers getting in the way that’ll take you from 1st place, with the promise of all those shiny upgrades, to the back of the pack in an instant. Were the game not so wonderfully addictive, it would make for a very frustrating experience, indeed. However, I’d be lying to say that I didn’t curse the TV screen a few times.

In Burnout Paradise I’d always have one eye on the GPS to ensure that I was going the right way whilst racing. This isn’t a problem in Most Wanted as the route is clearly marked with very visible checkpoints during races.  Criterion has further improved their open-world racing by creating a race environment that flows much better than in Paradise. Whilst the tracks are still challenging, you hardly ever find yourself wondering where you should be going;  which is handy as the game doesn’t give you much time to think things over whilst you are racing! 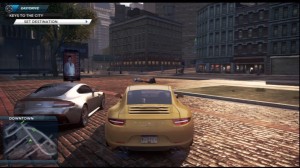 to the game’s producer, Criterion’s Leanne Loombe, earlier in the year she went on at great length about how the game focuses on the online community aspect of play. Whilst I’d usually roll my eyes at all that, the game did provoke a sense of rivalry (which, of course may have been one sided) between me and some of my Most Wanted Playing friends.

Most Wanted uses  Autolog 2, an upgraded version of the online hub first introduced in Criterion’s Need for Speed: Hot Pursuit. This means that the game is continuously tracking where your stand in relation to the folks on your friends list.

And it tracks everything. I’d be driving about, minding my own business when FLASH; I’d be caught by a speed camera, my impressive law-breaking speed displayed on screen. But wait,my pal  CaptainXmas sped through there 10mph faster than me. From the dark part of my psyche a tiny voice told me that I could do better, so I spent the next ten minute trying to hurl my car past the speed camera just so I could get the bragging rights. And the same goes for all the races, billboards and carjack locations. You could spend all day just trying to beat your friends billboard jump records (particularly cool as it replaces the billboard with your profile picture). 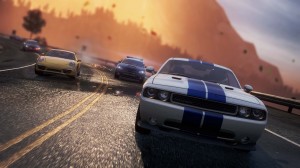 Selecting what you want to do in Most Wanted couldn’t be easier thanks to the EasyDrive Menu. Using the D-pad you can select races, destinations, cars, modifications and enter the multiplayer mode. There are no cumbersome menu pages or anything like that and control of the car is never taken away from you. The EasyDrive menu can also be accessed using Kinect voice commands (Xbox 360), which means that you can alter car mods on the fly, during races, by saying what you want to change. Not exactly easy, but certainly doable.

Most Wanted also features one of the most diabolically satisfying features of the Burnout series, and that’s the takedowns. Seeing the car in front flip into a wall due to my well-timed nudge made me grin from ear to ear. The ability to pummel opponents so hard that they lose control of their vehicle just strokes something evil inside me.

And it seems to 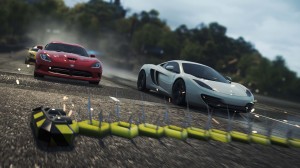 be the same for others as well. As you’d expect from a game that is oh so community focused, Most Wanted has a very competent multiplayer mode; which again will be startlingly familiar to anyone that has played Burnout Paradise. Entering a multiplayer game puts you in a competition consisting of number of events known as a SpeedList. These events can be stunt jumps, speed runs or just out and out races.

Before things get underway can start players must drive to the race meet area, first one there is already on the way to top place, with SpeedPoints being awarded to the early arrival. Whilst waiting for the stragglers it seems to be quite in order to try a smash the crap out of anyone you can. Very uncivilized, but at the same time a lot of fun.

Be prepared to be on the receiving end of a few takedowns throughout the events, as the carnage continues no matter what. Most Wanted is a griefer’s paradise, going as far as to actively encourage it by awarding points for each takedown. 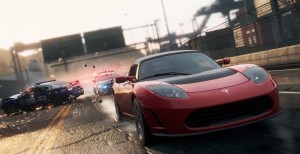 At the end of each set of events there’s an intermission period where, you guessed it, players get another go at trying to smash each other up. At the same time SpeedPoints are tallied, accolades are awarded and the Most Wanted player crowned.

Most Wanted is a visual spectacle. Not only does Fairhaven look gorgeous, all the lighting, particle and lens effects gives us one of the best-looking racers ever. I loved the way that the sun blinds you for an instant as you drive out of a tunnel. Driving behind other cars with all the dust and the sun makes it difficult to see. But I expect that; tail-gating a car at 120mph as it drifts around a dusty hairpin bend’ll do that. It would be unfair to fault a bit of realism. 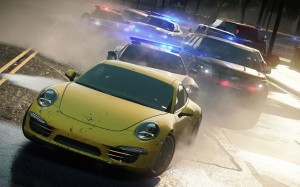 when I say that Need for Speed: Most Wanted should be considered the pinnacle of arcade racing. It takes the superb Burnout Paradise and removes all the annoying bits, leaving us with the sort of cutting-edge racing action game we should expect from the masters of the genre. As a racing game it’s one that you will keep on coming back to, be it for a bit of solo fun in single player or the incredibly satisfying multiplayer.  Buy it now!