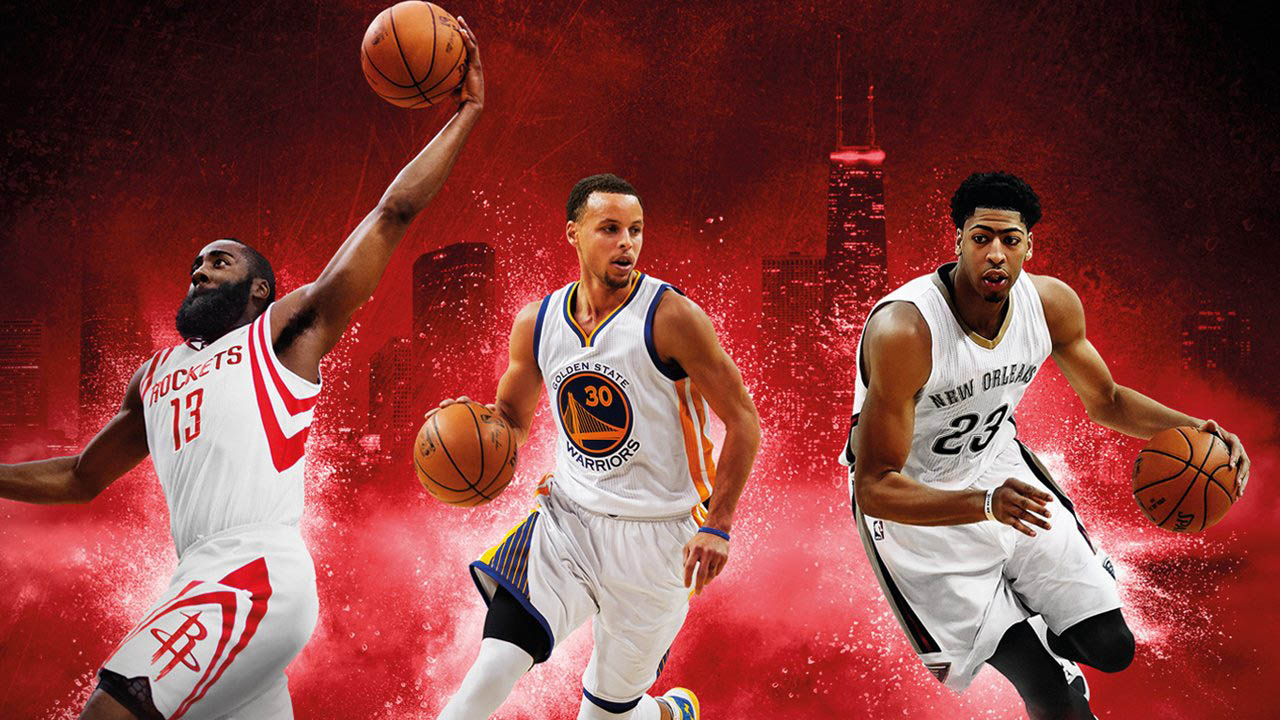 NBA2K16 does sports right. It manages to capture the feeling of a sport by focusing just as much on the court as off the court. While it does fall short in a couple of areas, NBA2K16 is an exceptional NBA game.

On the court, NBA2K16 is overall solid however it is not without flaws.

The basic controls are simple enough to pick up and they generally work quite well. I did have trouble passing to the correct player on several occasions. I also found moving a bit clunky at times, especially when trying to get around another player.

Overall though, controlling players in both offence and defence works well enough. I found the gameplay to be fun but also challenging which I enjoyed. 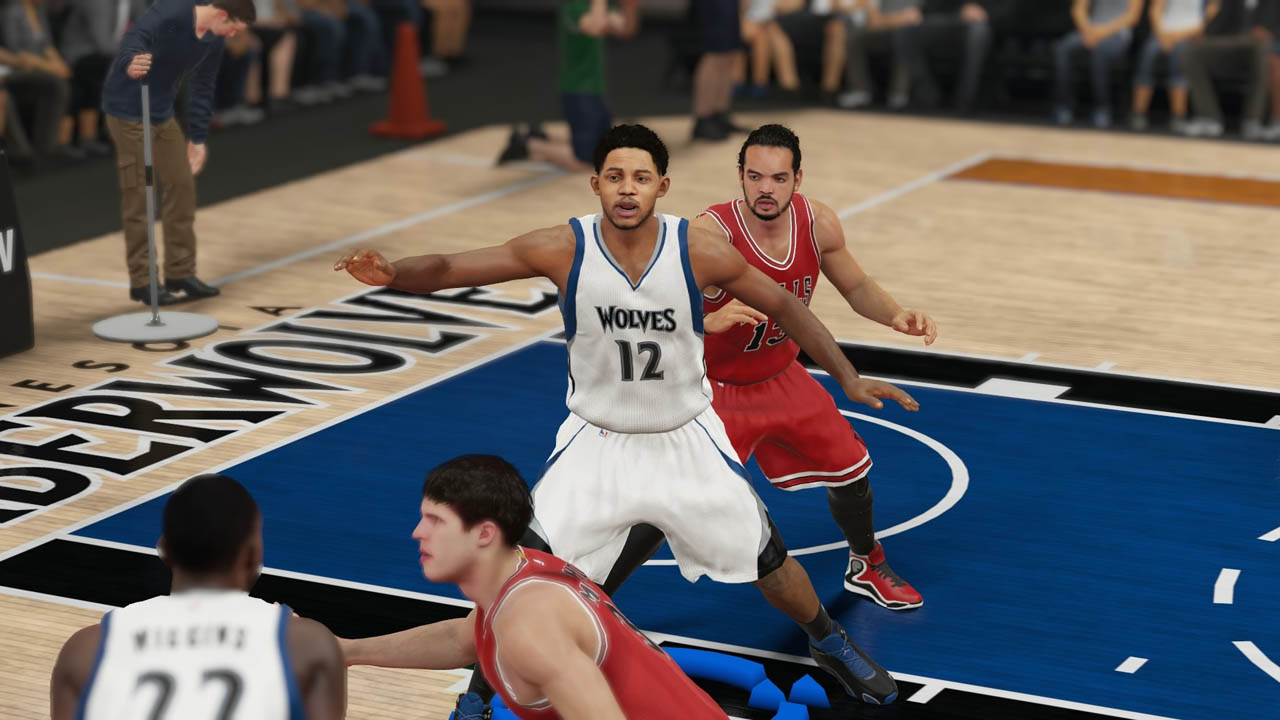 The game manages to capture the feeling that each match is a real NBA game. It does this by doing the little things such as having pre and post-game commentary, showing interviews with players, having a half-time lecture by the coach and by providing excellent in-match commentary that feels natural. All this comes together to create an immersive atmosphere that many other sports game fail to capture.

One of the great things about basketball is that the position and movement of all players on the court is important. Even a small mistake or slow reaction by a player on defence away from the ball will almost certainly lead to points being scored.

As a result I found playing as a single player to be as fun if not more so than playing as the whole team. This is reflected in the range of modes using a mix of an individual player or a whole team. 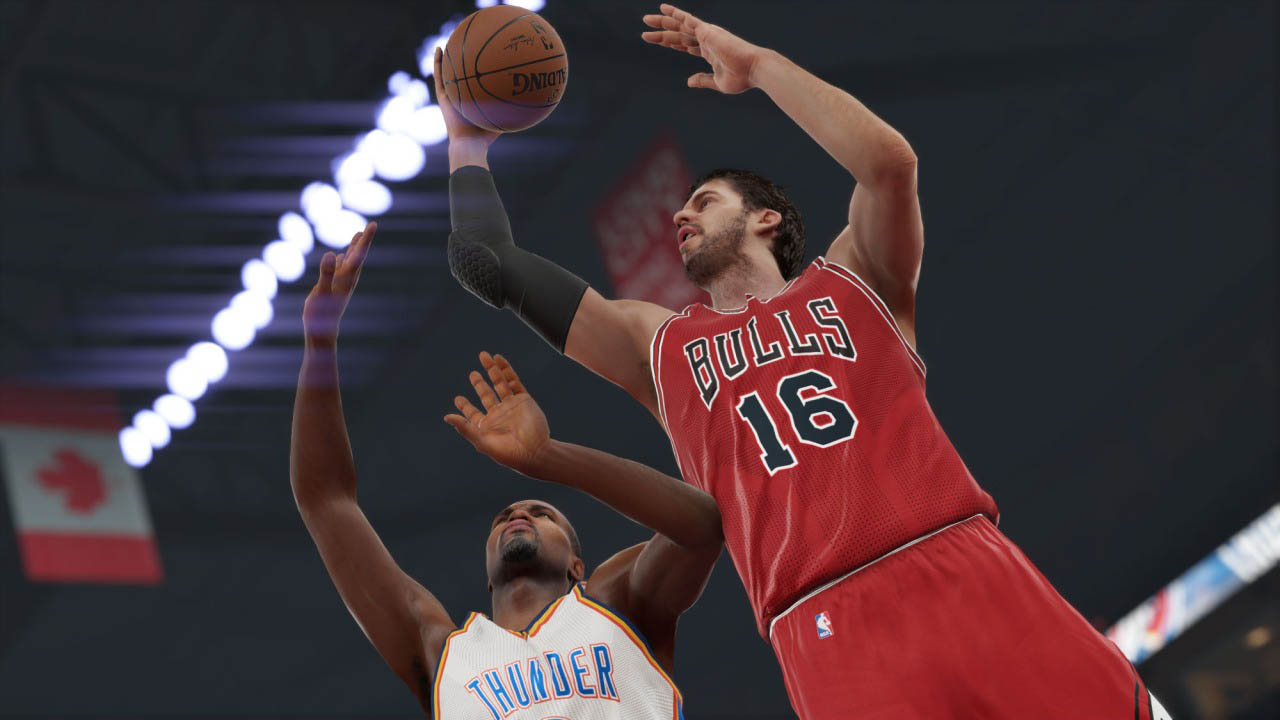 My favourite thing about last year’s entry into the NBA2K franchise was the dynamic story in the MyCAREER. In this mode you create a character then go with them on their journey to become an NBA star. This year’s entry builds upon this by featuring a fully-fledged story by director Spike Lee. While this should have been the NBA2K16‘s most interesting feature, it proves to be its biggest disappointment.

Instead of feeling like a story woven into the gameplay, the story in MyCAREER mode feels more like a movie with gameplay awkwardly placed between scenes.

The story follows Frequency Vibration’s (the nickname of your created character) life as he goes from a promising high school talent to NBA superstar. This plays more as the setting though as the story focuses on the relationship between your character and his troubled best friend. 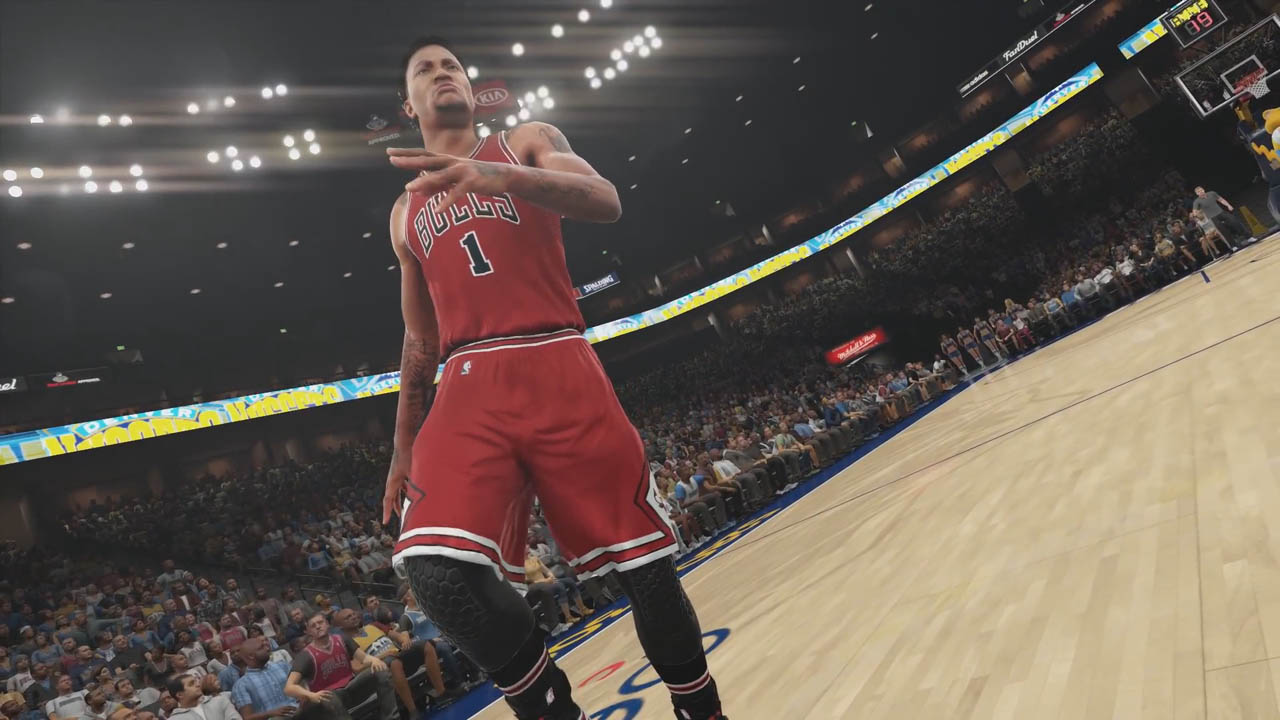 There is an apparent disconnect between the gameplay and the story which makes it hard to be engaged with what is happening.

While you get to choose which college and team you play for, you don’t actually make any decisions which affect the story. Your performance on the court is irrelevant to what is happening off the court. To make matters worse, the cutscenes can also be very lengthy and they do feel as they drag on at times. As a movie though, the story is actually quite interesting, it unfortunately just doesn’t work as a story for a video game.

Once you make it through this story though, MyCAREER mode opens up into a far better gameplay focused mode as you live out each day of your character. Money cleverly serves to upgrade your characters abilities. You earn money based on the wage specified in your negotiated contract, your performance on the court and the by partaking in endorsement deals.

While your character initially starts off weak, spending time to upgrade him proves to be addicting, enjoyable and rewarding. 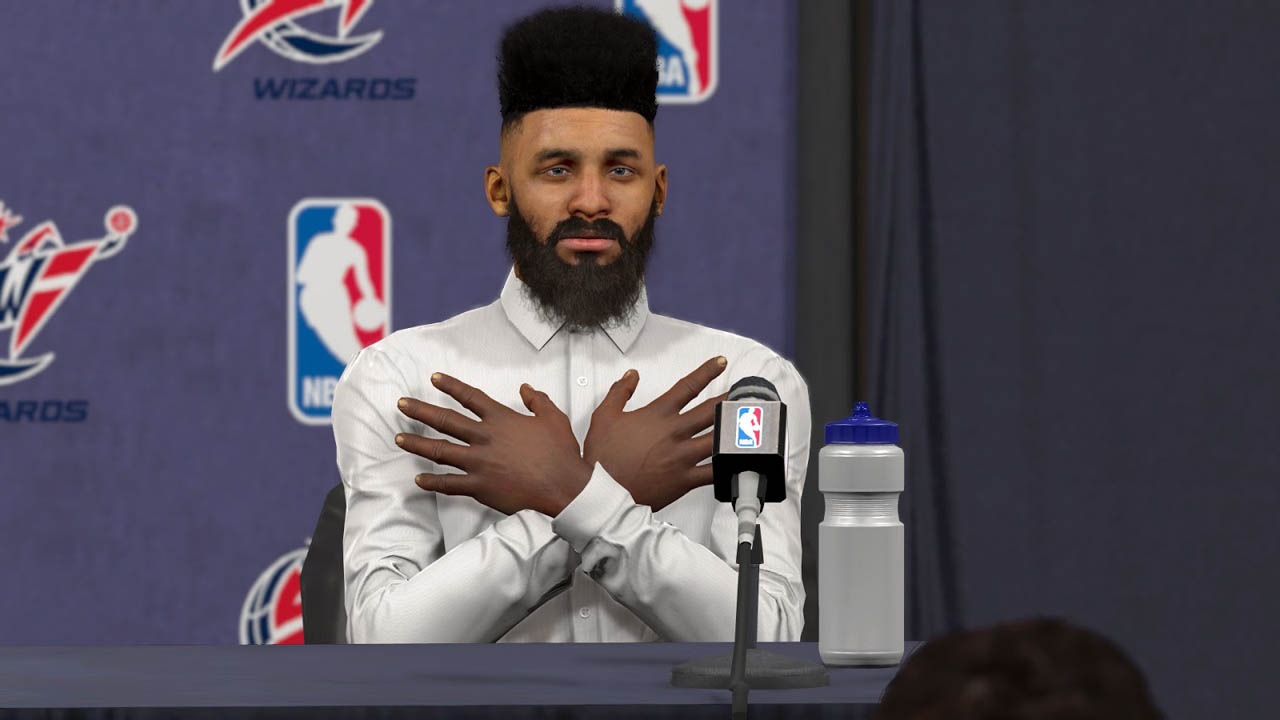 While the days on your court is fun and enjoyable, days off prove to be just as important.

On your days off, you get to choose between hanging out with one of your connections to earn a reward or upgrade your character through either training or by earning money by participating in endorsement deals.

Outside of MyCAREER mode, there is the standard selection of modes available including a Manager mode, Online mode, Standard League mode and of course an online card collecting game. All of these modes are very well put together and provide for many hours of entertainment. 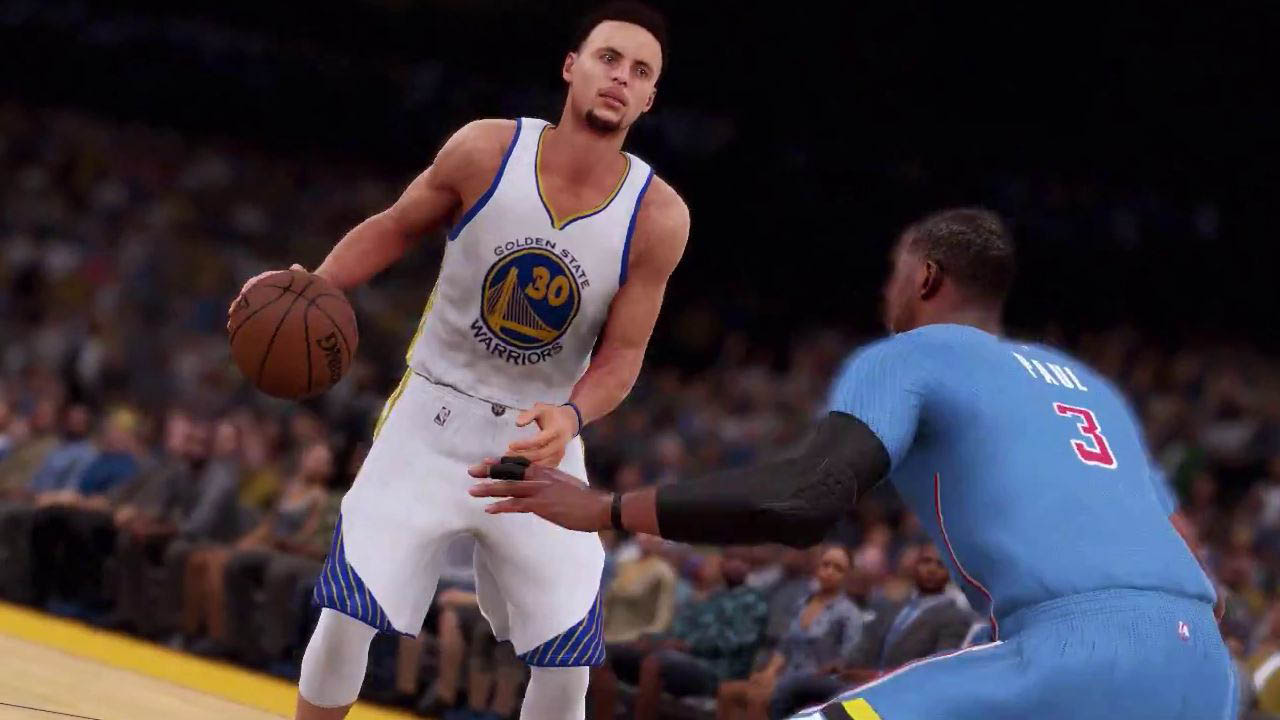 One of the more unique ones is MyPARK.

Here you choose a place to represent, then take your player to an online area to basically hang out with other players and sink some hoops. Each of the three teams you can represent has wildly different environments that the area is placed in ranging from a giant aquarium and water park to a carnival. Each area is filled with  several different courts ranging in size and players per team. You are able to simply walk up to any of these courts and play with random people online.

Graphically, NBA2K16 looks amazing. Player’s faces have a surprisingly high level of detail and aesthetically the game is overall quite good.  The music is very suitable to the atmosphere it is trying to create and the commentary sounds both professional and natural.

Ignoring the very awkwardly placed story mode in MyCAREER mode, NBA2k16 offers an overall great packages. From the well-designed game modes to the solid gameplay mechanics, NBA2k16 provides the best put together sports game I have got my hands on.