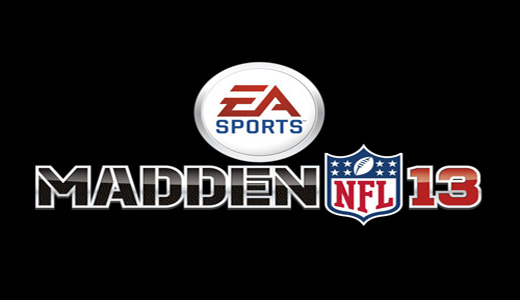 The iterative nature of many games can sometimes turn the once avid fan of a franchise to being a wee bit jaded over time, and sports titles fall into this trap.

In saying that, many gamers who live and die by their sports games may be champing at the bit for each successive version of their favourite – who am I to judge.

Having little history with Madden titles preceding this latest installment, the thought was that I would be able to offer a realistic opinion of Madden 13 without having been weathered by it’s long standing history. The reality is hit and miss.

Firstly, as I am a Kiwi and therefore allied to our own national sports, I am about as familiar with American Football as I am with the airspeed velocity of a South African Swallow. Therefore, many of my misanthropic comments will perhaps be born largely out of ignorance. 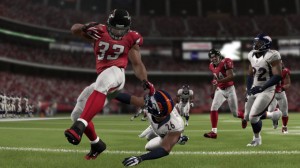 The first thing that once perhaps unfamiliar with the game will notice is the somewhat unwieldy menu system the player has to navigate through. It is immediately clear however that there are a HUGE number of options available to the player, ranging from typical Career Modes, to Online Modes, through to Management and Coaching, not forgetting the Tutorials.

The list is seemingly infinite. The piece de resistance though, is the connected Career Mode.

Management ranges from building teams from either the selection of existing NFL players or custom building player profiles, or selecting a coach to play through in connected career.

The interesting thing about the career mode in Madden 13 as that leagues are user-created and consist of up to 32 players either online or offline.

to advancing players are based on gathering experience points, awarded for achieving an enormous roster of tasks. These points can be used at the player’s discretion, either as coach or chosen player to either advance a key player or attribute to a variety of team management options as coach.

For the newbie, it takes some time to get your head around the micro-management of the game and making sense of everything that is offered to you (Some decision-making can be based on Twitter feeds received from appropriate industry magnates).

The ultimate goal of your career progression is to rank as high as possible on the hall of fame, whereby your successes are pitted against those of other players. This provides a bit of a bloodlust for a legacy that can be viewed by other live players. 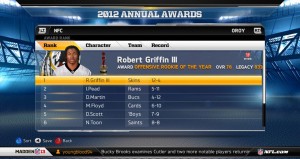 Before launching into your career, and potentially well out of your depth, you can learn the ropes by practicing plays and controls in the Maddens tutorial feature. This was essential for me to even make any forward momentum in competition.

There is a huge number of mechanics during play, the field littered with trajectory markers depending on your field placement and chosen play, but once you begin to figure out what it all means it starts to feel like the thinking mans sports title, with strategy and planning the underlying element. Gone are the days where triangle = lob, and square = kick, there is much more tactical involvement here. 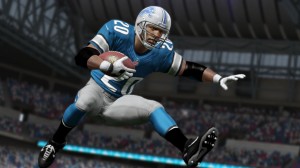 In gameplay, the new Infinity Engine is on display and along with the sharp fidelity of the visuals, the visceral nature of the engine gives the game realistic physics, separating the animations from the fairly clunky robotic like animations of older sports titles. It is fascinating to see some of the smaller, intricate plays that would be carbon copies of each other have a degree of variation from moment to moment and makes Madden feel like a living, breathing world.

There are occasional moments where randomized physics defy logic a little and seem awkward – momentarily pulling you out of the immersion, but they are few and far between.

The sound is remarkable 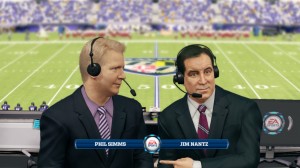 also. The buzz of the crowd seems to undulate appropriately and seem to be dynamic in nature ensuring the feeling of a real crowd, especially in a home theater setup. Along with this, CBS commentators seem to ad lib and deliver their lines in an improvised fashion rather than stilted, canned lines that are often prevalent in sports games.

There are many other features that are part of Madden NFL 13 including community groups, online matchmaking, mobile apps to assist in management. It’s all pretty exhaustive.

If you are after a simple pick up and play sports title, Madden NFL 13 will deliver a swift kick to the head and send you into a state of delirium. However, if you want a deep, visceral and strategic sports title, or have a profound understanding of American Football and want to follow through with an immersive, strategic gameplay experience Madden NFL 13 may just whet your appetite.