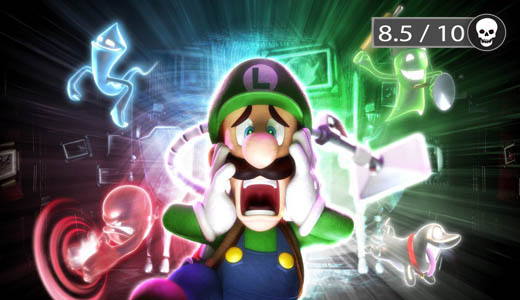 The less famous brother of the plumbing duo; Luigi is returning to reprise his infamous role as a reluctant ‘Ghost Buster’ to reign in what were once friendly Ghosts, now gone wild.

Equipped with the Poltergust 5000 (a modified vacuum cleaner with both a suck and blow feature and a ‘Mark II’ of the original Poltergust 3000) and a Flashlight with a Strobulb add-on our hero goes up against the restless dead and is hired once again by Professor E. Gadd to cleanse abandoned Mansions of ghostly activities.

It seems that all Ghosts have become rather mischievous, causing mayhem and horror, due to a mysterious object that keeps them under control having been broken into shards. 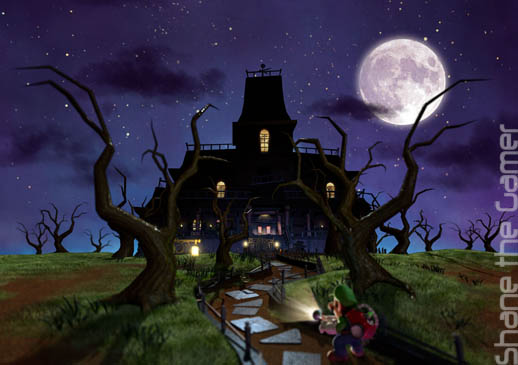 How this occurred and why will be revealed throughout play with a surprising twist that features Mario and the return of King Boo towards the end of the game.

From the grounds to winding staircases. Going from room to room, and peeking out windows, Luigi will not only suck up his fear but any of the nocturnal spirits he comes across within five mega sized specifically themed Mansions in the Evershade Valley. 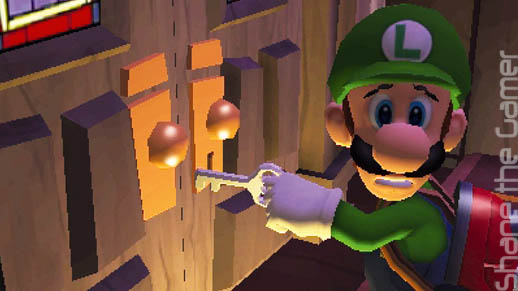 When encountering a Ghost, they first must be stunned using the flashlights’ Strobulb, then you can unleash the sucking power of the Poltergust. Not all is as easy as that though and not all Ghosts are the same. Some have guarded themselves against being ‘flash banged’ and need a bit of coercion to meet their eventual fate.

Each Mansion is divvied up into an array of bite sized to medium sized Levels, which can at times contain a Boss.

You also eventually acquire another item called the Dark Light Device. This is EXTREMELY handy. It will reveal hidden treasures, paths, doors and furniture. 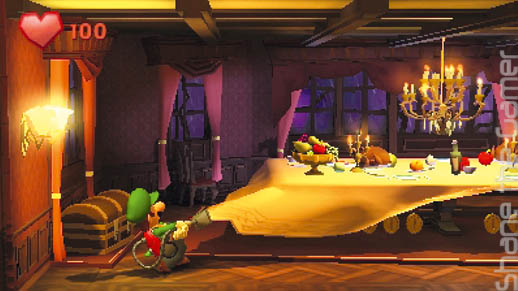 The lower touch screen of the 3DS dictates a Map with points of interest, and as with all types of games where maps are involved you will actually find yourself viewing it more often than not.

There are also ALOT of coins to be collected, in the most un-obvious places. These are tallied up at the end of Level.

Solving puzzles to get through locked doors, acquiring keys in order to venture further, pulling, pushing and tugging on objects all the while seeking out these shards of the said mysterious object, known as The Dark Moon. 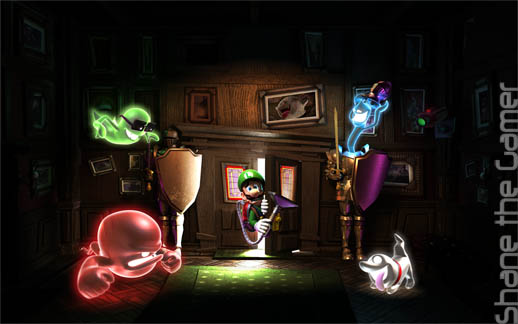 Restoring these is the only way to stop the outbreak of these phantoms and regain some sort of order.

The Ghosts have a life of their own in gameplay and will place obstacles before you or move items that you need only to place them somewhere totally inconvenient and seemingly unobtainable.

A fair bit of sighing and head scratching will take place as you conquer this game, in its gloriously rendered, cartoony graphics.

Levels are not quite what you expect either. When I picked up this to play, I suspected a fully 2D platform based gameplay style. 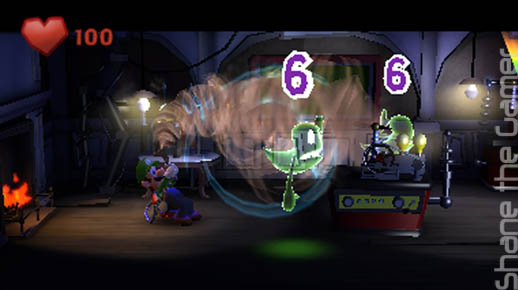 All Levels have depth to them and whilst trekking about is still very linear, you can go deeper into the background of a said environment, moreso than what you would expect.

Bloated with cheesy humour and lengthy play, Luigi’s Mansion 2 is a direct sequel from the first game released in 2001 for the Gamecube.

Multiplayer via LAN or online offers up co-op play called Scare Scraper, where up to four gamers each control a differently coloured Luigi. 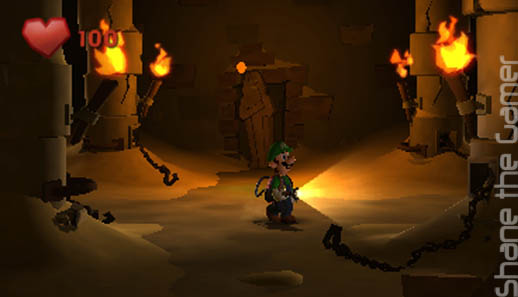 The aim is to go through each floor of a mansion and complete the specified objective within a time limit. When the objective is completed, you ascend to the next floor. The floors are all randomly generated, with different floor layouts and placement of ghosts and items, and the all gamers may select to ascend a mansion that either has a limited or endless number of floors.

In all there are four different objective types are available: Hunter, in which all the ghosts on the floor must be captured, Rush, where you all have to race against each other to find the exit to the next floor, Polterpup, is the chase after and capture of ghost dogs and Surprise, in which one of the other three objectives are randomly chosen per floor. 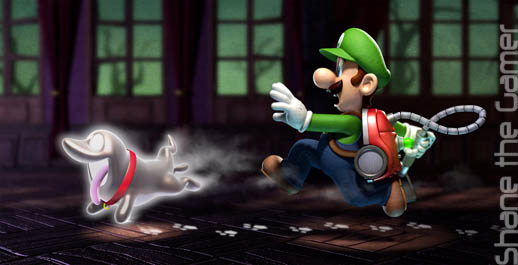 Simplistic in its concept but challenging beyond words Luigi’s Mansion 2 is one of those necessary must have games for all 3DS owners.

Both addictive and rewarding this title compliments the handheld gaming device and is a welcome return of a over a decade old series.