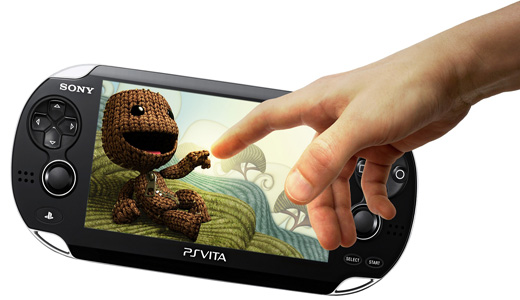 Sackboy is back and he’s got his touch on.

Those that have played LBP before will find this familiar territory.

On the flipside of that, if you have been sheltering yourself away from the best and most unique games to date, then LBP will see you take on the controlling of a patch worked character called Sackboy. 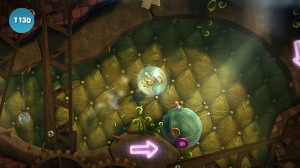 Via an in-game Menu called the Popit you will quickly learn to customize your Sackboy, from colouring through to clothing, facial adornments and more.

Once this is done (and can be changed and swapped out at any time throughout the entirety of gameplay as you collect more items) then it’s off to the games hub where you choose what Level you want to partake in.

There are main Levels choc filled with sub Levels, usually eight or so. Completing all of these (not always to 100%) allows you to move on to the next lot. Oh and I must mention BONUS Levels, where bonusy delights can be collected to up your Skill Points.

LBP on Vita begins with a Tutorial Level, guided by a very strange looking Colonel Flounder. Now for those well rehearsed in everything that is Little Big, don’t think you know it all, as certain functions have changed to suit the Vita.

The game takes place within a mysterious planet called Carnivalia, where everything is, yep you guessed it, Carnival themed.

The Puppet Master of this planet found that his Puppet Show was becoming increasingly less popular to the point where he received the dreaded Booing from the crowds. This was the final straw and he disappeared, seemingly for good.

It is upto you to get the show 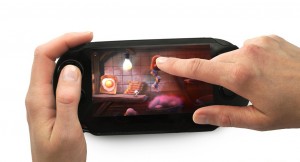 back on the road, as it were. Restore the popularity for the Carnival and get the Puppet Master back into action.

Gameplay has a heavy focus on utilizing the Vita’s touch controlling system, both the rear pad and front screen. You can move objects within the world to where you need them to be, control mechanisms to get them working and place stickers (found within your Popit and collected throughout play) also via touch. Infact it’s not just placing stickers, you will need to either shrink or stretch them to fit via pinching the image and dragging it. Sticker in the wrong place? Use the new sticker remover tool.

You can also create your own stickers by snapping real world photo’s using the Vita’s built in camera(s) whilst in-game.

This is a version of Little Big Planet that’s almost beyond our imaginations. 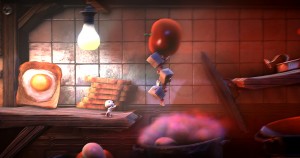 In addition to the familiar controls that manipulate Sackboys movements; Jump, Run, Grab, Expressions and so on, The Controlinator along with The Motion Sensor, The Touch Sensor, The Touch Tweaker, The Touch Cursor, The Layer Tool, are all mandatory mechanics to get you creating and playing on the Vita’s LBP.

Object too far in the background? Shunt it forward by tapping the rear panel. You need a step to reach a higher platform? Grab and drag it from within the immediate environment and place it where ever you need it to be. It’s your world to use as you need to. Everything is already there, you just need to make it happen.

A cinch to play, once you get the gist of all controls its simplicity with fluidity.

All hardware buttons and 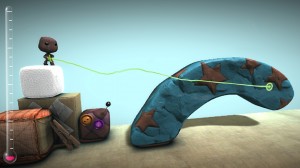 additions on the console are made use of, and some. Playing the single player, either just for a quick play or going hard until your Vita screams out for a recharge gives that much needed satisfaction that you have achieved something for the day.

Asides from the full on, and lengthy solo marathon, there is, of course Multi-player.

As with all of the previous Little Big Planets, content creation is king. 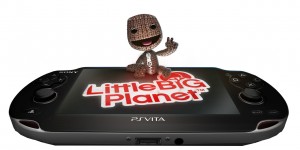 Create your own worlds and share them Online within the global and gigantic LBP Community. Likewise, take a peek at others’ creations and have a go within them.

Little Big Planet is the type of game that gives a different experience each and everytime you enter into it.

It is the only game, ever, that allows you to be as creative as you like, manipulate the 2D/3D environments to a customization creation.

If you already own a Vita, keep this title on your checklist, if you do not have the touchy, feely console, this game will be every reason to get one.