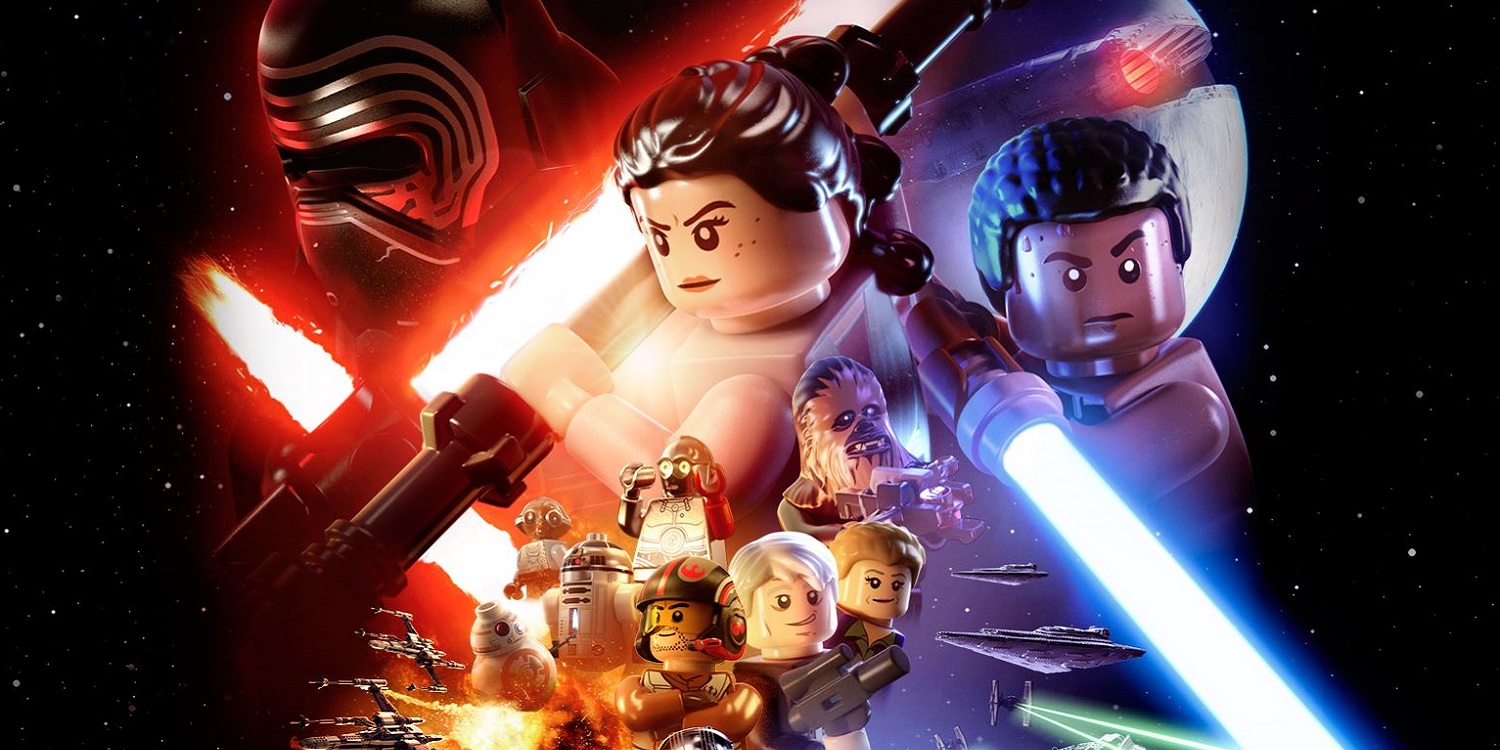 TT Games returns to the Star Wars universe to bring us their quirky and humorous retelling of the latest Star Wars movie with Lego Star Wars: The Force Awakens.

As a card carrying member of the Star Wars generation, I breathed a sigh of relief after watching JJ Abrams’ entry in the Star Wars saga. It’s going to take a lot more than the exciting new adventures of Rey, Finn and Poe to remove the bad taste left by Jar Jar Binks and all that Midichlorian rubbish. Even seeing the geriatric, but charming, Han Solo swagger around didn’t really make up for being forced to watch Hayden Christianson stumble through his lines. 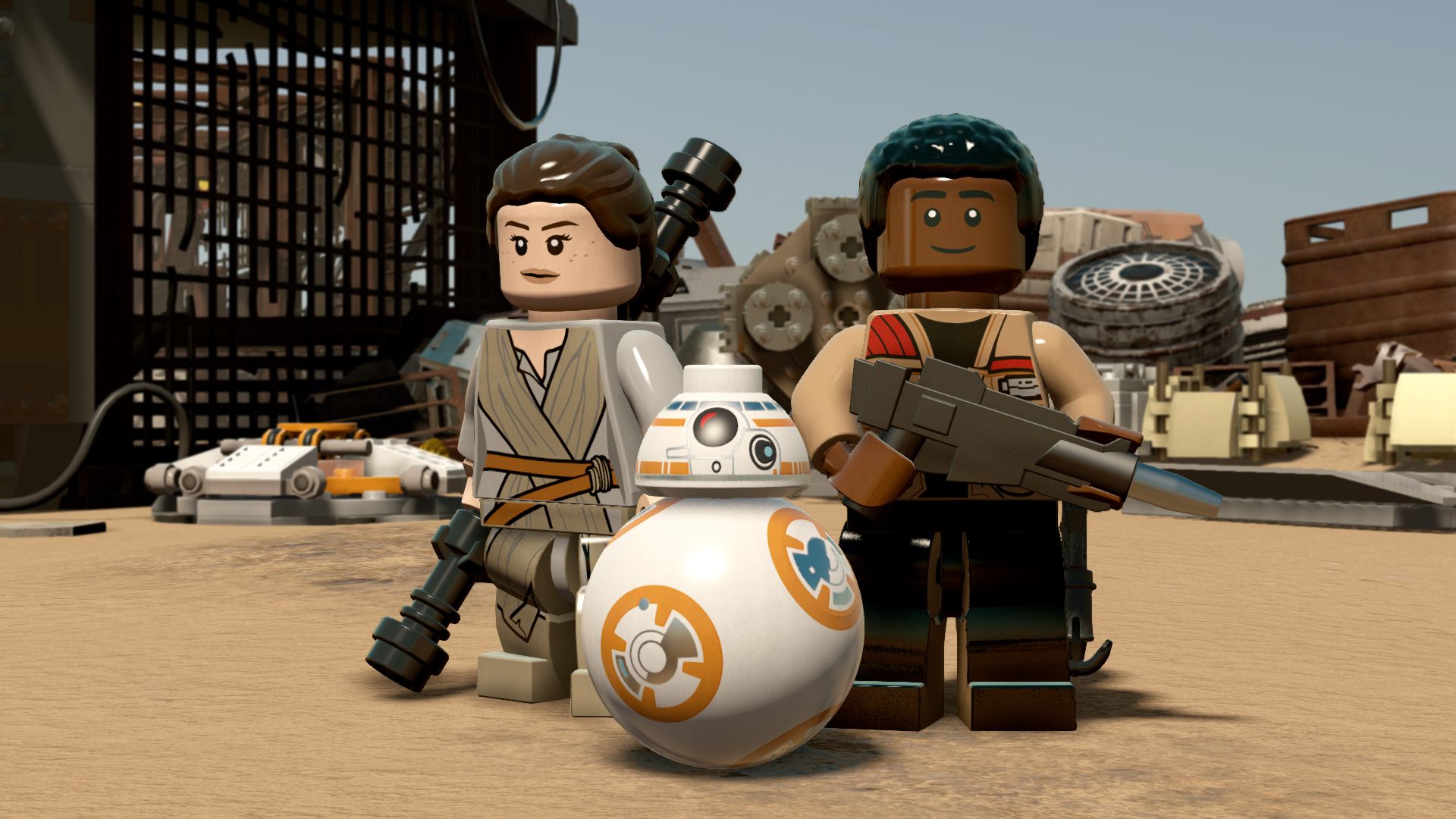 But it was a damn good start, resetting the saga back on the right path.

If you’ve played any of the recent Lego games, like those for the Marvel and DC universes, this one is very similar, but Star Wars. TT have now refined the mechanics of their games and overcome some of the annoying “what the @#!$ do I do now?” issues of their early Lego adventures.

As usual the movie is recreated perfectly, but as a bonus we also get the battle of Endor from end of Return of the Jedi as a prologue seguing into The Force Awakens’ story with a “Thirty years later” caption. 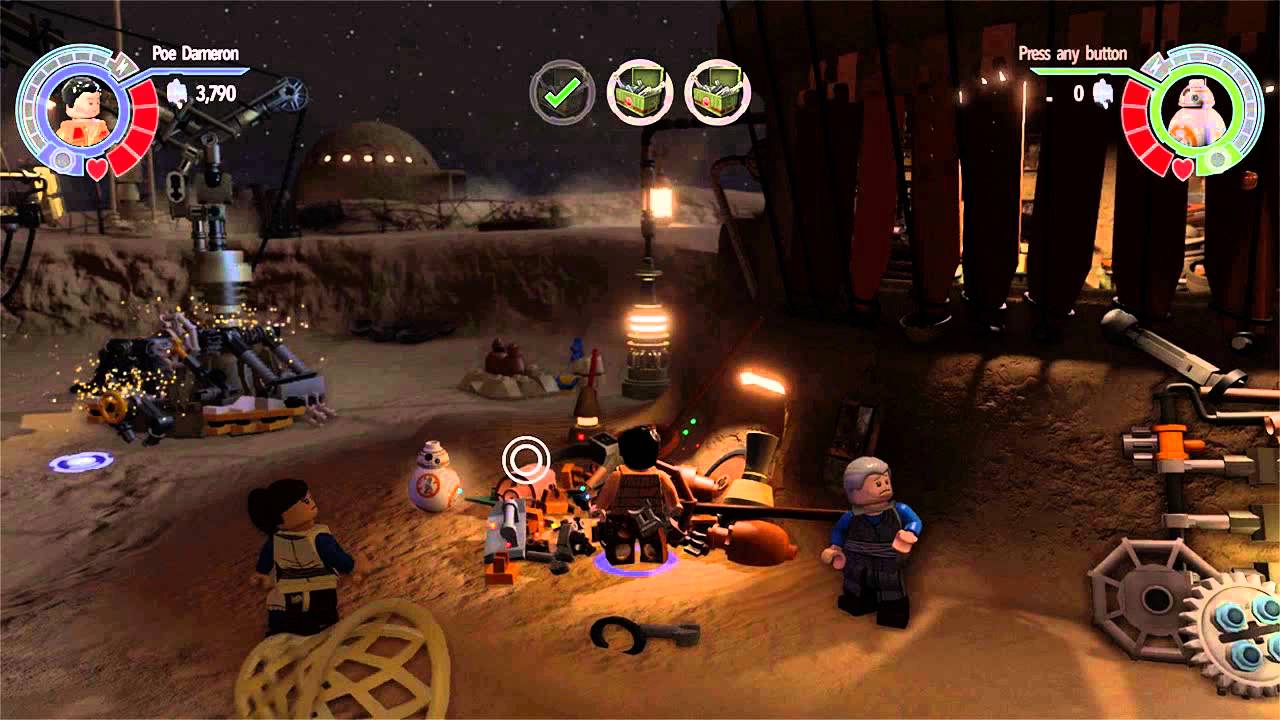 Lego Star Wars: The Force Awakens is at, its heart, a puzzle game. As with the recent Marvel Lego games, combat plays a more important part in this one as well. Instead of just blasting hapless Stormtroopers in a free-for-all skirmish, there are also blaster battle sections that have you moving from cover-to-cover in order to defeat the enemy.

There, is, of course, still plenty of opportunities to let out all your frustration on enemy cannon fodder and smashable scenery which’ll earn you coins and reveal secrets. And there are masses of secrets.

Whilst the levels in these Lego games can be a bit samey, like they are all created with a Lego game construction kit, The Force Awakens does mix things up a bit, like getting you to fly ships and vehicles. There’s also the introduction of commanders, such as Wicket and Leia, who can control a team of helpers to get tasks done. 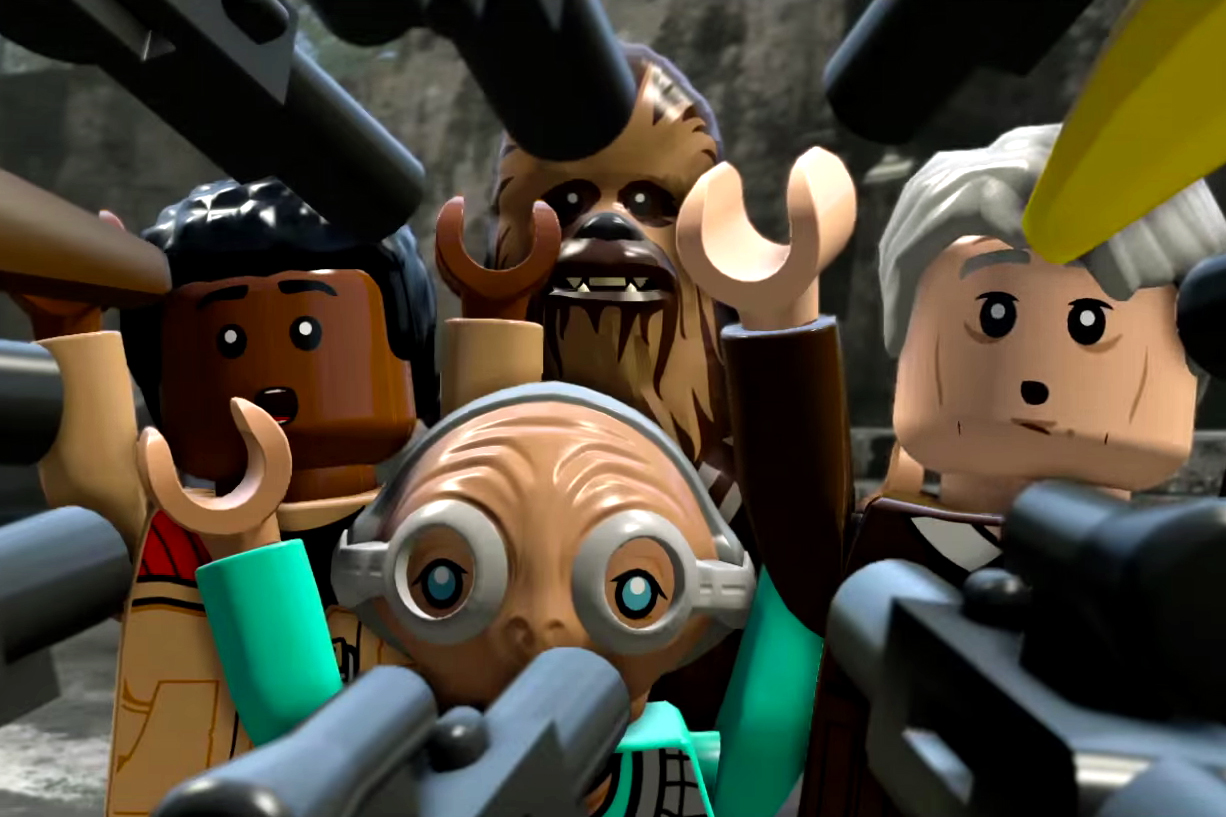 The puzzles often require players to destroy items in order to build new, useful objects. In a move, which I believe is new for a Lego game, The Force Awakens features multi-build, giving players an option to construct an object from a few choices. This add a bit of extra depth to puzzles that are sometimes a bit pedestrian (and at other times quite perplexing).

Fans of the Lego games will be happy to know that The Force Awakens features the same “gotta collect them all’ approach to Star Wars minifigs as the other games.  Your progress in the game unlocks characters. Each character has its own skills and abilities. With the option to free-play a completed level, you’ll want to come back and unlock all the characters, each with their own abilities, in order to reach all parts of the Levels. 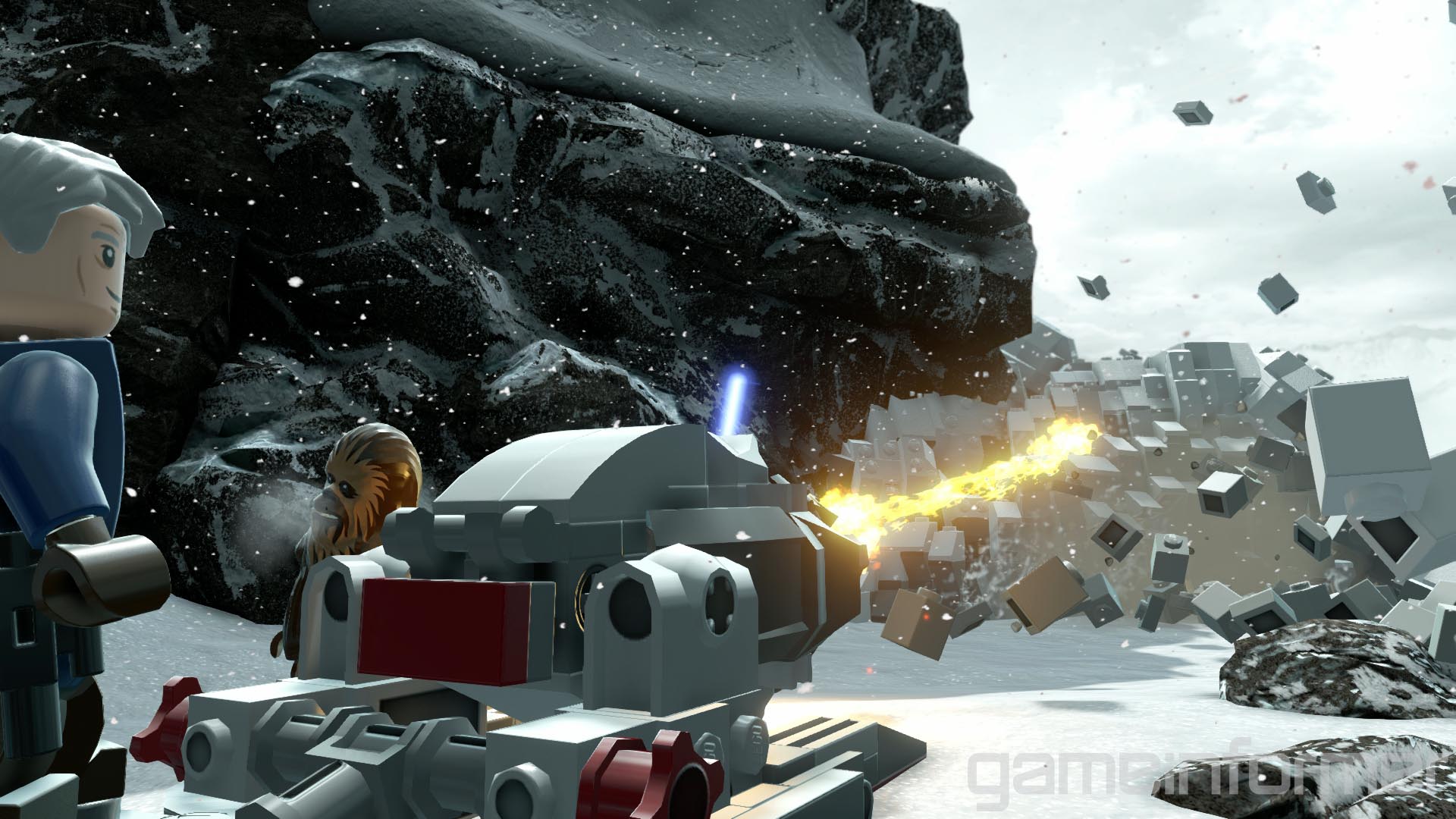 The game uses the voices and score from the movie, which is awesome. I even thing that they’ve got some of the cast to provide some extra lines just for the game. The use of John William’s authentic audio cues adds an extra layer of magic to the game.

The graphics, of course, are superb. Lego lends itself so well to digital recreation, the result being a photoreal representation of all your favourite Star Wars characters.

Lego Star Wars: The Force Awakens absolutely delivers. Not only is it a good Lego game, it’s also a very good Star Wars game as well. It doesn’t take itself too seriously and is guaranteed to raise a smile with its cheeky humour. I whole-heartily recommend the game to fans of both Lego and Star Wars! The force is strong in this one.