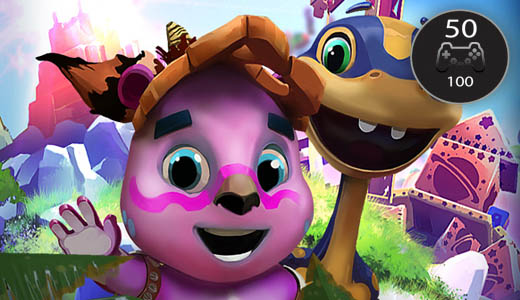 At first glance, JUJU is a brightly coloured cartoonish side-scrolling adventure about the eponymous panda shaman and his adorable sidekick, Peyo the lizard. I’ll be honest with you. I didn’t find this game to be even remotely impressive.

If you’ll do me a solid and give me a moment of your time to make my case, you’ll see why your money would be better spent on lotto tickets or bribing bums to fight (actually please don’t do that it’s really not that entertaining… I mean, uh, nice. Right.).

While the premise is played out, you could argue that it still works on the whole.

Basically, these kids open up Pandora’s Box (in this case, it’s a staff and a malicious entity) and it’s up to them to right the wrongs they’ve unleashed, saving daddy or resident shaman Jambee by collecting the broken pieces of the staff on four separate planets. 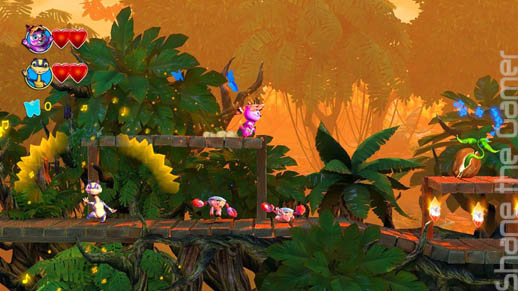 You’ve seen this in everything from Finding Nemo to 28 Weeks Later – idiot kids can’t follow instructions, shit hits the fan for everyone in the land and then hopefully someone learns a lesson or two in the process of cleaning up the mess.

The animation looks like it’s straight out of some b-rate children’s cartoon, but I’d hazard a guess that it’s kind of the point.

It’s rather apparent how the game’s targeted at a younger audience, considering how everything from the opening cutscene to the enemy critters try to come off as cute. I suppose you could say they succeeded to that end, but last I checked not all munchkins are exclusively into warm fuzzies. Some of them might enjoy a more stylistic aesthetic, better characters or even some degree of artistic depth.

I could be wrong though, maybe they still watch that Dora The Explorer like there’s no tomorrow. 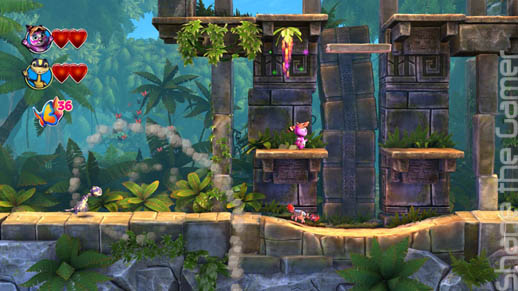 Credit where credit’s due though, I suppose. Let’s put the be-rattle to the side for a quick moment to highlight the few things that this game does right.

Considering that the targeted demographic for this game is targeted at ankle-biters finally done with the hundredth re-run of Blues Clues, the gameplay is accessible and easy to pick up for beginners.

The controls are by no means clunky, responding accurately and how you’d expect them to. 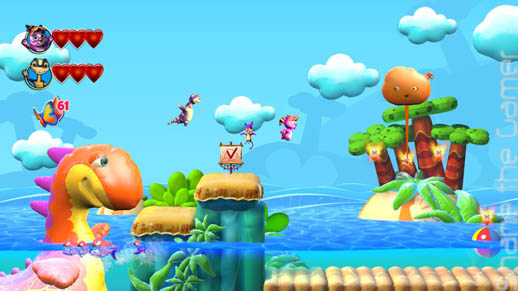 JUJU also offers co-operative play, where a parent or playdate can take on the role of Peyo and share the screen with Player 1. This provides the opportunity for bonding and shared experiences, and the idea of gaming bringing people together is one I’m totally on board for.

The sounds aren’t particularly terrible, which is a saving grace. If you’re not dashing into or jumping on top of objects or critters in this game, you’ll probably be unleashing a song which functions as the general ‘interact’ button.

I’m all for the idea that music can change the world, beating baddies and converting creatures as you go about your merry way. The soundtrack itself isn’t great by any means, but not exactly cacophonic either. Make what you will of that. 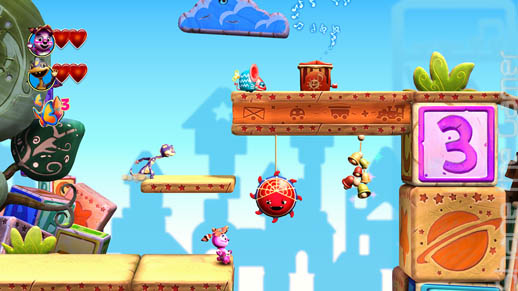 A full play-through of the game only takes a couple of hours, but there is a decent bit of replay value in JUJU.

After your first run through, you unlock greater difficulty modes and a time attack variant. There are hidden rooms and collectables scattered across each Level, alongside lots of achievements to unlock.

You can witness the birth of an achievement obsessed perfectionist in action as they replay the Level over and over to find that one goddamned panel that leads to the secret room where the final handful of this game’s coin or gem equivalents have been hiding. I still haven’t made my mind up as to whether or not that’s a good thing. 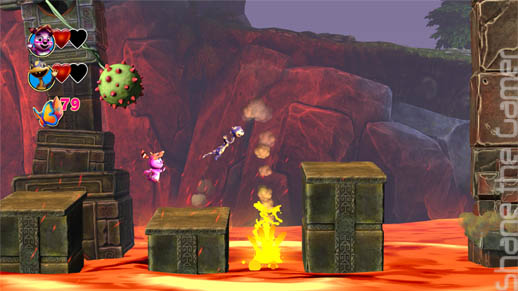 Boss battles are definitely some of the high points that this game has to offer.

There’s a reasonably steep difficulty curve that rears its ugly head as soon as you start developing new skills and abilities, making the game surprisingly tough for what you’d assume would be tailored at  junior or casual gamers.

On co-op though, it’s a welcome challenge.

You do have to essentially beat every boss twice though, as your first encounter gives you a taste before they run off and pick up a couple more tricks to bash you over the head with later. 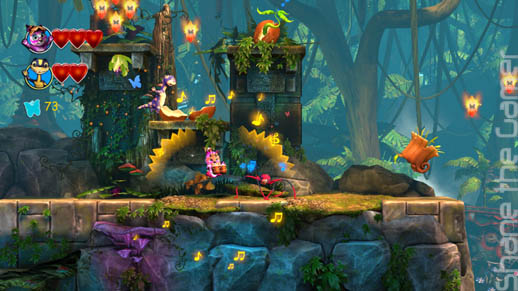 It takes a bit of pattern memorisation to go toe-to-toe with those bastards, but it’s by no means impossible. Granted, the final boss is tough enough to give seasoned players a run for their money, taking three or four tries before you finally get it down pat. Perhaps this is where the kids start picking up all the rage and swearing.

Ultimately though, overall this game is pretty bad. Alright, I think I’m being unfair – at best, JUJU is average.

But given the fact that the realm of gaming is more saturated today than it’s ever been, average may as well be crap. When you borrow as heavily from other games as this title does – and worse yet, don’t match up to the quality that your influences possess, why would anyone pick your game over the originals? 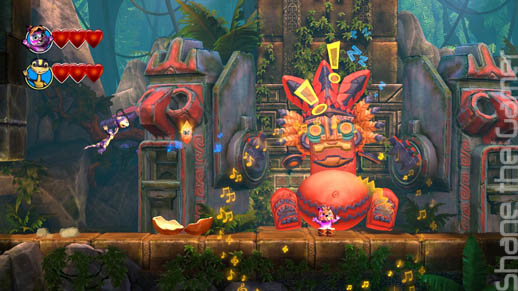 Save yourself the twenty bucks you were going to waste on this title and pick up an old copy of Mario, Zelda or Mega Man and show your kid, nephew, niece, kidnapped child how it’s really done.