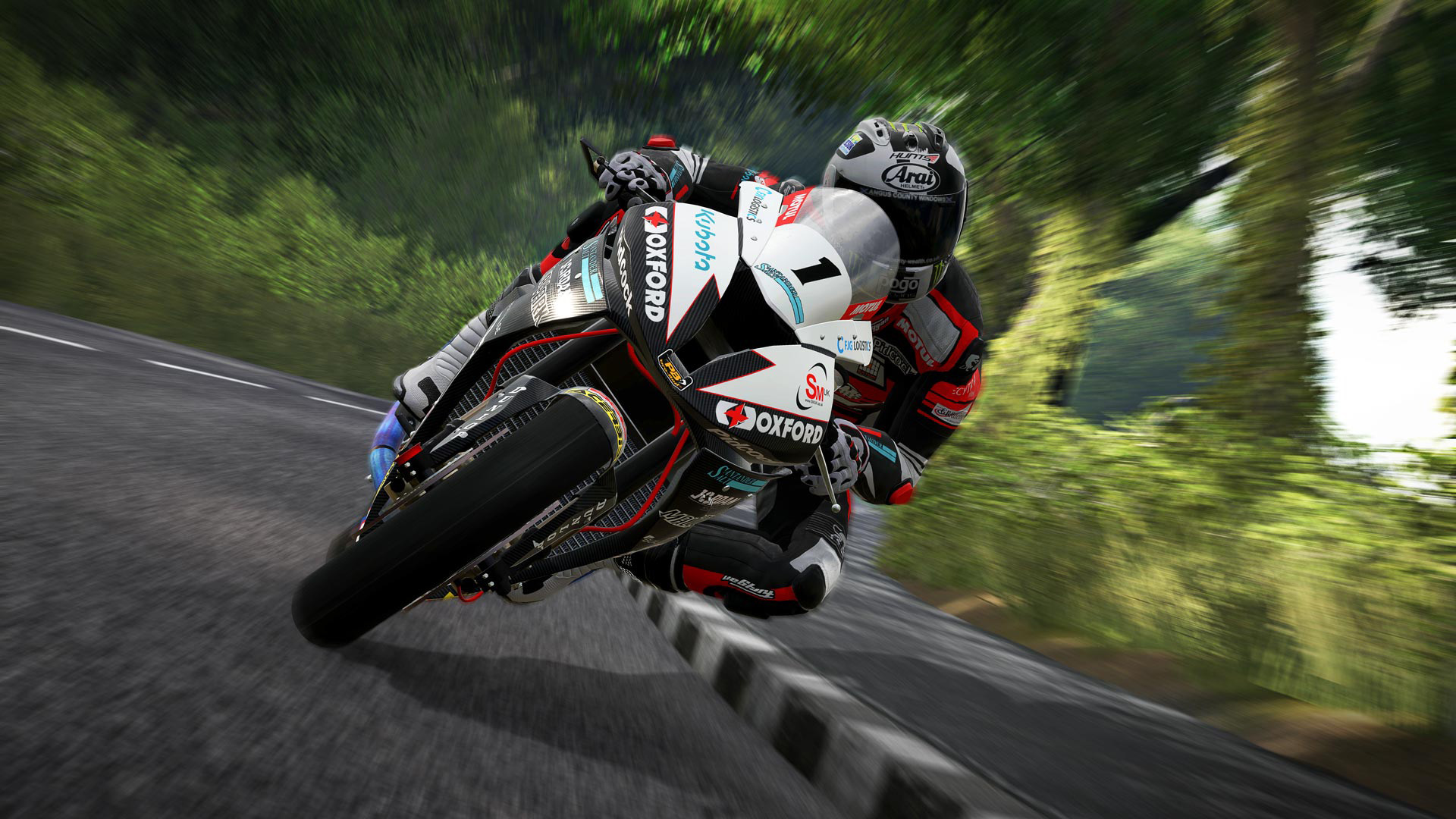 Whilst racing in cars translates well to a 2D screen, motorcycles don’t always fair quite as well. After 2014’s shocking Motorcycle Club, can French outfit, Kyotonn bring some of the class from their WRC rally games is TT Isle of Man: Ride on the Edge?

The Isle of Man TT (the TT stands for Tourist Trophy) is an annual time-trial motorcycle event with a history stretching back to 1907. The race is held on 38 miles of public road close specially for the event. It is considered one of the most dangerous events in motorsport.

The narrow roads offer little in the way of protective barriers. Instead they are, for the most parts, hedge-lined country roads passing through the odd small town and village. 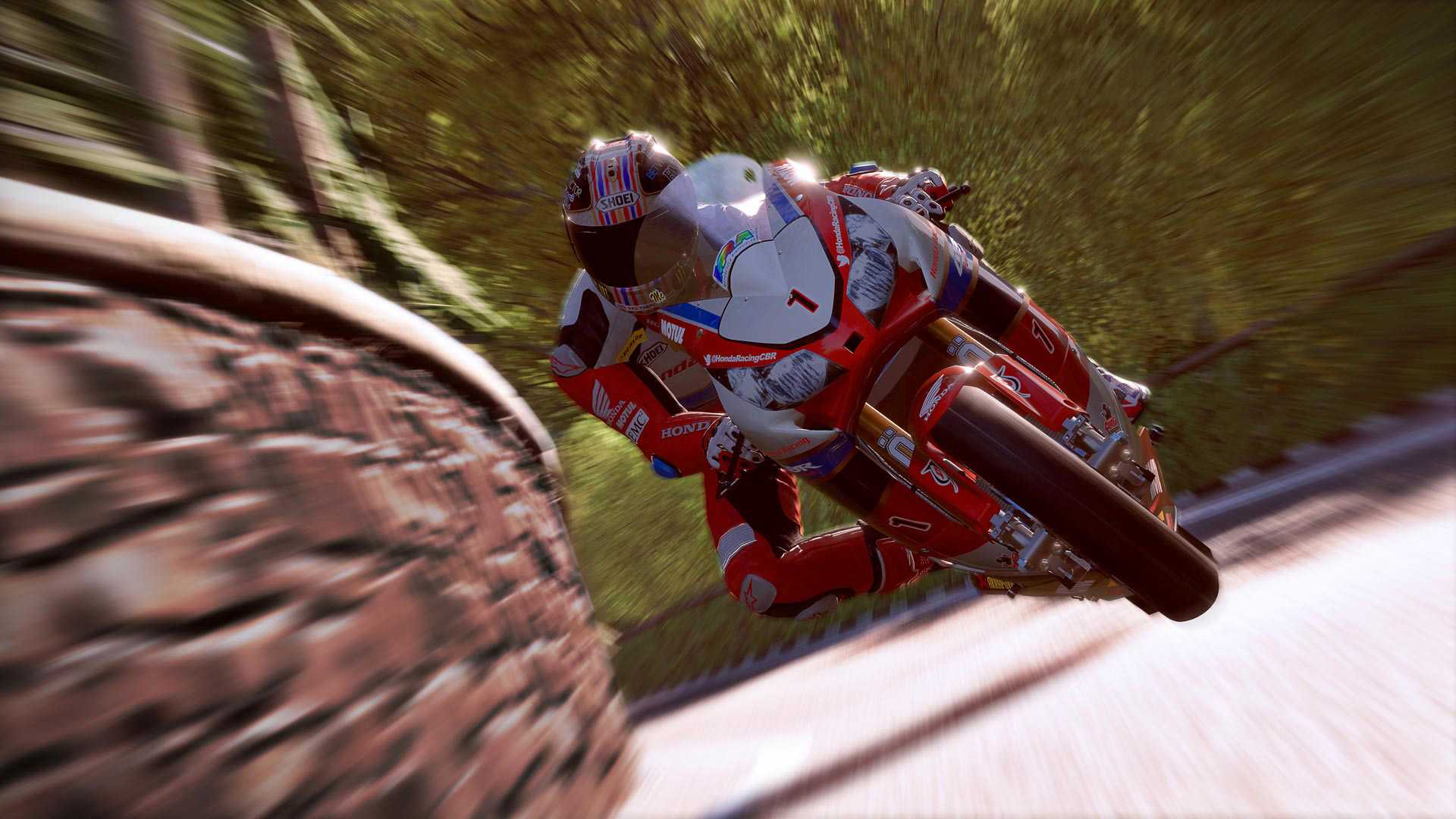 The Isle of Man TT Snaefell Mountain Course is a gruelling 60.7 km long. The developers have, apparently, modeled the course at 1:1 accuracy. A quick comparison using Google Streetview suggests that they’ve done a pretty stand-up job of recreating the bends and the elevation changes of the real circuit. Some, excusable, licence has been take with some of the background detail, but I’d say that it’s a very impressive effort on the part of the developers.

The essence of the Isle of Man TT event may turn off anyone keen on a full grid of racers a la MotoGP. TT’s staggered starts mean that whilst racing Snaefell Mountain will see the odd competitor, you are not going to be jostling yourself though the pack. 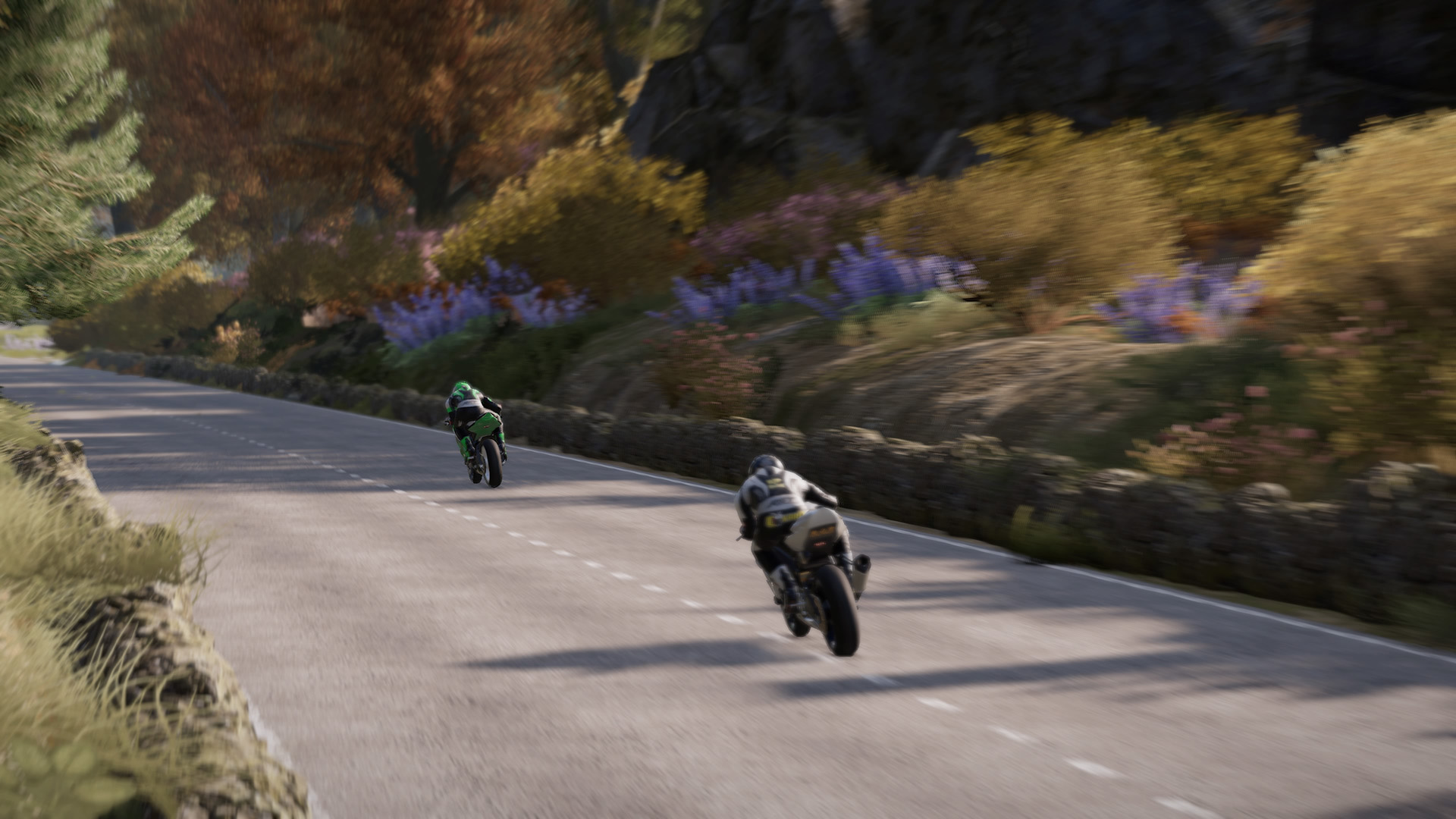 Thankfully, there are another nine circuits included in the game, two in Wales, two, in England, two in Scotland and three in Northern Ireland. The all have narrow UK roads, but unlike The Isle of Man TT, you can have a traditional MotoGP-style mass start race.

Nine circuits may not sound like much, but it is over 100 kms of road. Add to that the choice of morning, noon and evening settings and it’s not bad, really. Also, they are not Grad Prix circuits. There are bumps and other features that make the circuits more organic and realistic. 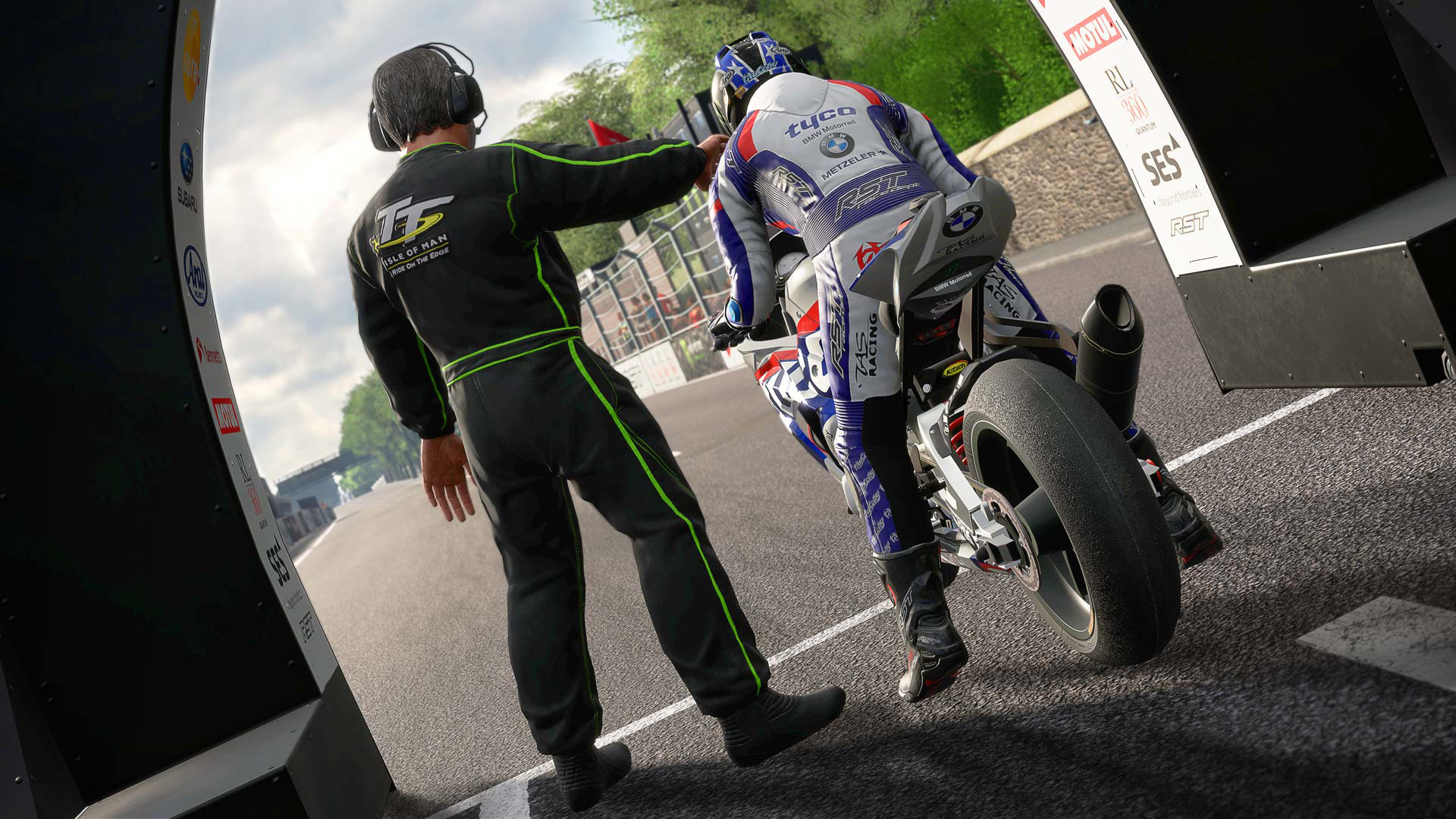 The graphics are really nice, not that you actually get a chance to see them at you thunder around the circuits. The picturesque villages, the tree-lined hedgerows all look very realistic. And as a former motorcyclist that spent his formative years hooning around the English countryside on two wheels, the environments are very authentic. The Welsh docklands circuit is probably the closest to an actual race track and the least inspiring of all the circuits.

The bikes as well are meticulously modeled. Whilst not the smoothest animation, you can see the riders revving the throttle and pulling the front brake. 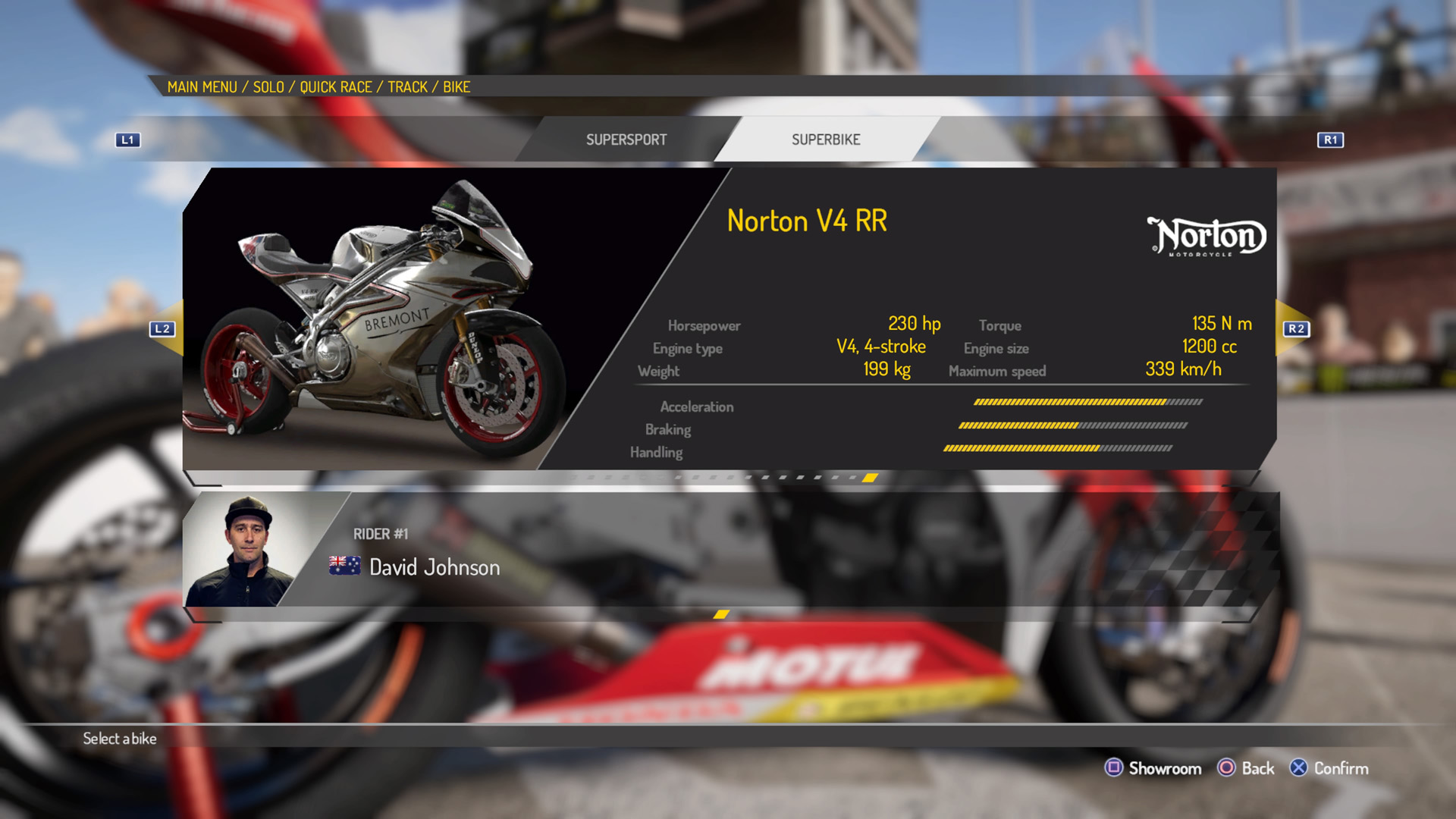 The bikes handle really well. The controls have just the right amount of sensitivity without being too twitchy. You still need to be careful, but once you’ve got the hang of it and learn the discipline to keep your speed and turns in check, it’s exhilarating. Remember you have two brakes and the game perfectly replicates the sphincter-tightening rear-wheel wobble that often heralds a bail-out.

I’d recommend that new players start with the third-person camera first, just to get the hang of the bike handling. Racing in the cockpit view, complete with leaning will give you the closest bike racing experience that you can have without actually jumping on a superbike and going for it. 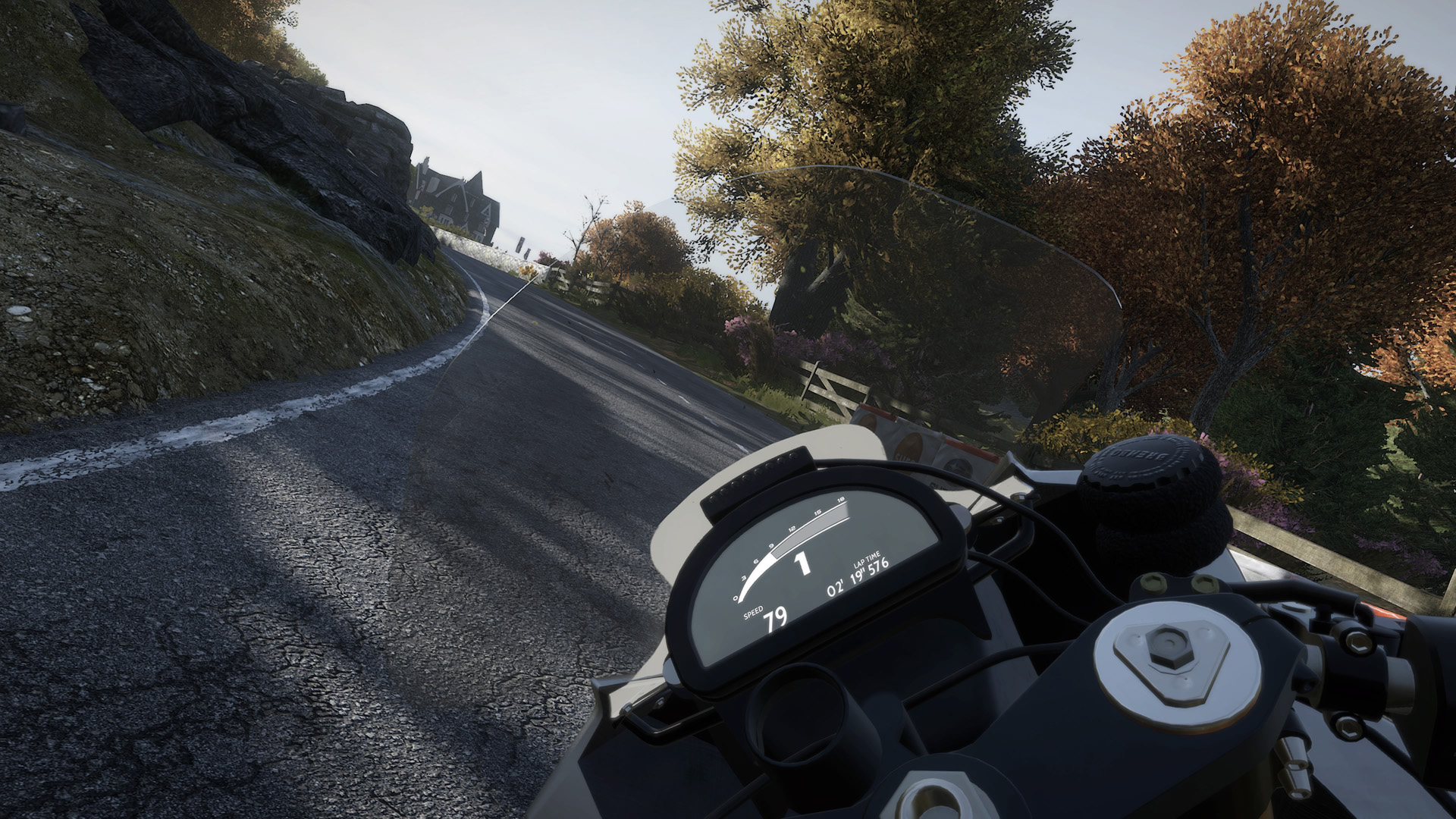 The game features both Supersport bike up to 675cc and Superbikes up to 1200cc. I’d suggest getting to grips with a 600cc machine before trying the more powerful bikes. You can choose bikes from all the major manufacturers, including Norton, Triumph, BMW, Yamaha, Kawasaki and Honda, as well as the Suter MMX 500 and EBR 1190RS superbikes. Bikes are kitted out in the liveries of the licenced TT riders that you can choose in the Quick Race and Time Attack modes.

You get plenty of game options to play. If you fancy a quick race, you can set up your own custom event, choosing circuit, time of day, number of laps and for all except the Snaefell Mountain Course, TT or mass start. 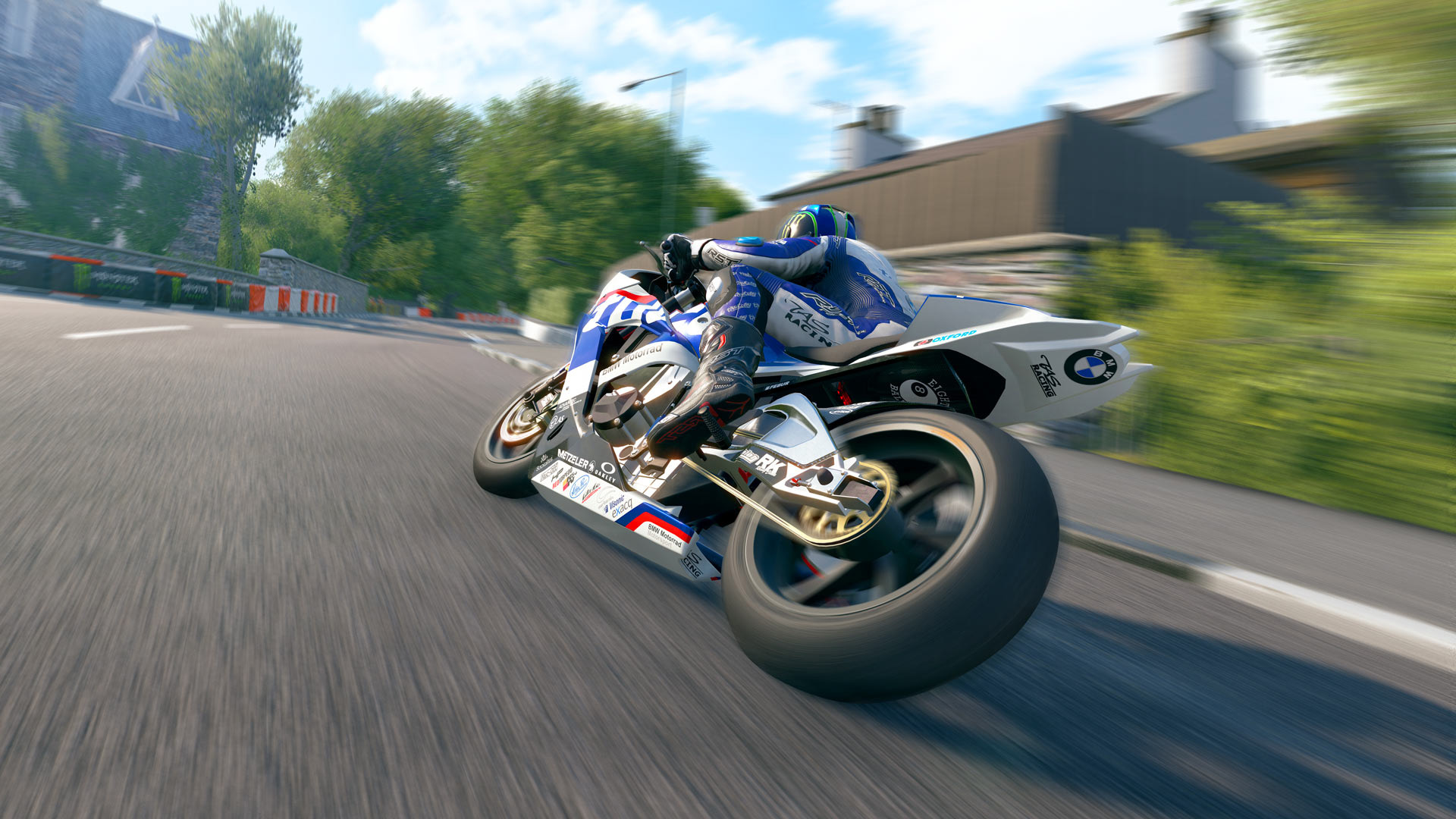 Quick races on the Isle of Man TT circuit can be set-up for a Tourist Trophy event, up to four laps of the 60.7 KM course (!) or just sections of the course. Time Attack allows you to get your best time on the circuits without having to deal with other racers.

The career mode allows players to customise their rider, choose their first bike and embark on a TT career. Race offers are received by email with the player choosing which ones to add to their race calendar. The races are a mixture of all the UK circuits, including sections of the Isle of Man TT. The events can be TT-style or a full grid, mass start. Winning races earns cash that can be spent buying more bikes for your garage. 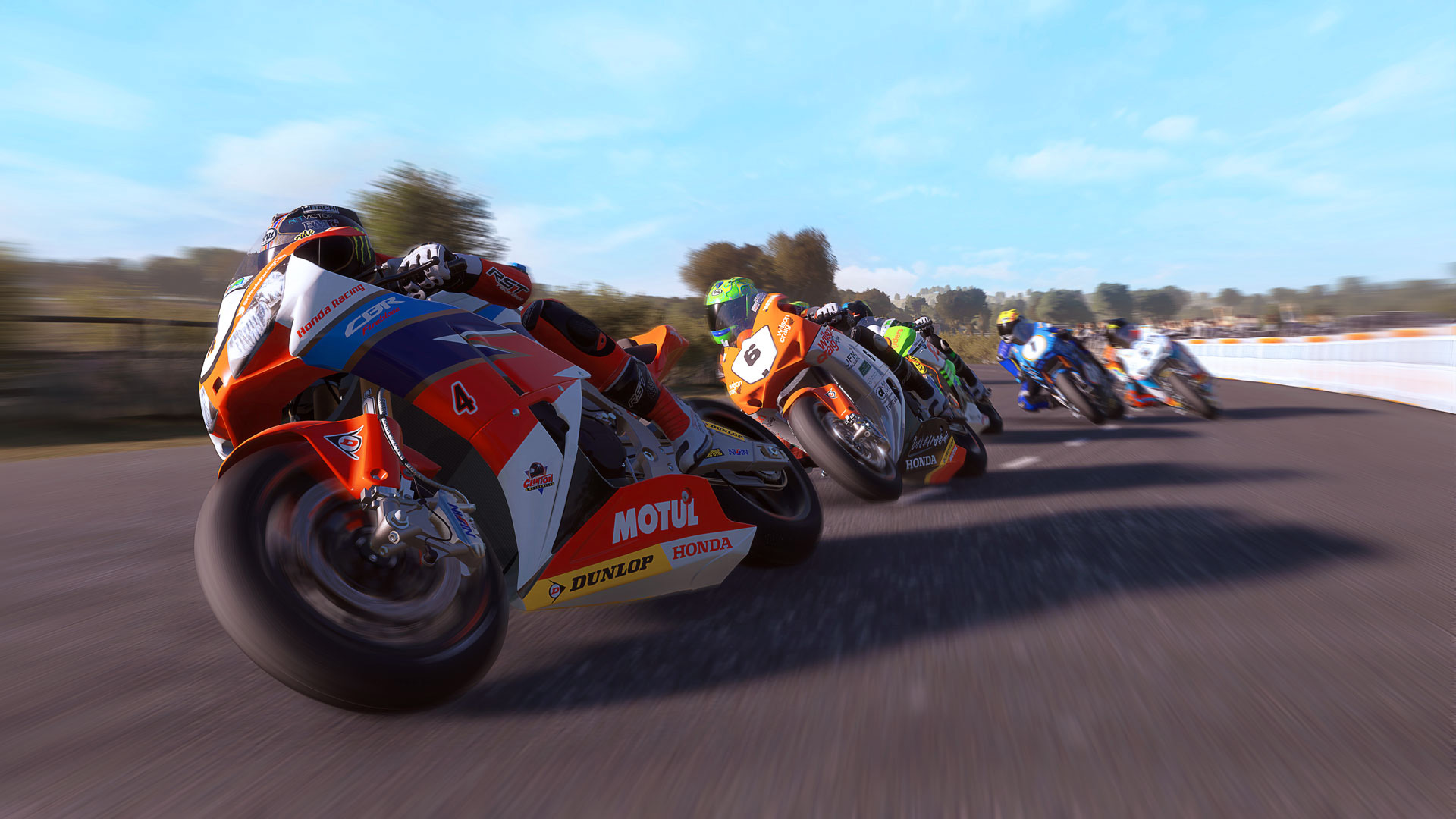 Multiplayer is catered for either online or locally. These retain the TT staggered starts, but do offer up some customisation, allowing the host to pick either Isle of Man or other tracks. For the Isle of Man TT, you can join other player doing the full Tourist Trophy, sections or, if you are really keen laps of the 60.7km circuit. Local multiplayer is a more time-trial-like affair, with up to eight player taking turns.

Isle of Man TT: Ride on the Edge does exactly what’s written on the tin. This may not be enough for many players looking for a MotoGP-style experience. But there’s plenty of bikes and the included circuits are very well designed. It’s a great-looking game with good bike handling mechanics.

Not only is it a fantastic realisation of the Isle of Man TT, it’s one of the best motorcycling games that I’ve played in years. 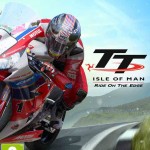