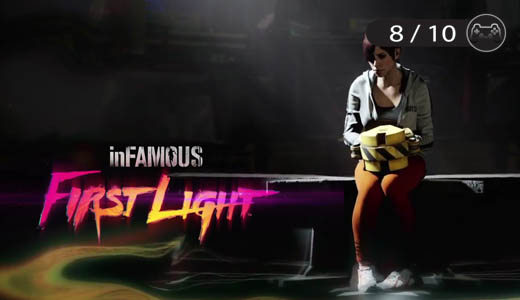 Despite being a fantastic game, much of the criticism leveled at inFamous: Second Son was directed towards its lack of mission variety and fairly lifeless environment.

The Seattle depicted in Second Son felt like a depressing place with its dreary, bleak weather and constant DUP occupation right at the onset.

So with a DLC story that is set before all of this oppression, has sucker punch managed to liven things up a little bit? Not so much, but with a grim preface to work from this seems only more appropriate now. 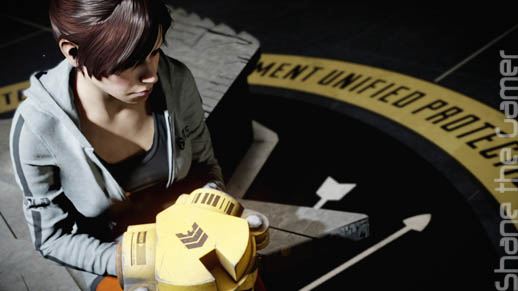 So this isn’t necessarily a bad thing, as First Light depicts the backstory of Abigail Walker, or “Fetch”, a drug addled street-teen introduced in Second Son.  Here,  events leading up to her brother’s demise (as indicated in Second Son) are fleshed out, as well as her inevitable incarceration at Curdun Cay – a DUI facility designed to detain conduits and run by the villainous ‘Augustine’.

The story jumps back and forth between these events and present day, where fetch is already a detainee at Curdun Cay. In her prison, Augustine spends much of her time taunting Fetch into unleashing her full potential, and these segments act like arena battles interspersed throughout the main backstory.  They are incredibly fun though and introduce some new enemies, leading eventually to a thrilling climax in a completely new environment. 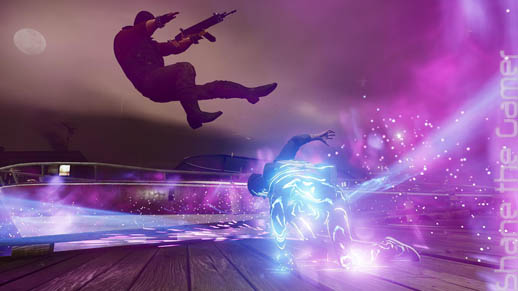 The premise seems to hold things together from a gameplay perspective fairly well, however there are a few noticeable foibles. The most jarring one is how the skill progression is handled in gameplay when the timeline jumps back and forth. Skills that are unlocked in the ‘present’ day detention facility sequences subsequently become available in the flashback sequences.

This is hokily explained by insisting that Fetch has been ‘holding out’ on Augustine, despite being challenged in combat by her DUP lackies. It seems bizarrely contrived, but at least an explanation is attempted rather than leaving the player head scratching. 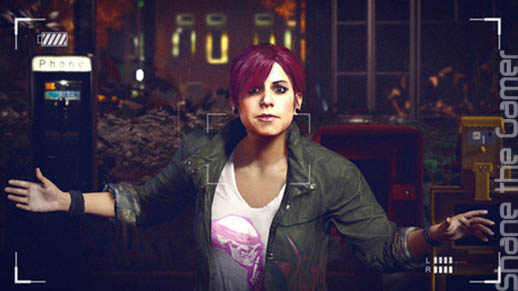 Secondly, the events in First Light that effect Fetch seem to be slightly at odds with how the same backstory was briefly covered in Second Son.  Fetch’s battle with addiction, while covered adequately in comic panel cutscenes, barely informs her motions in gameplay which seems a little disjointed.  Consequences of frenzied impulse, as described in Second Son, are stretched out into hours of gameplay in First Light, making Fetch’s personal tragedy seem less shocking. 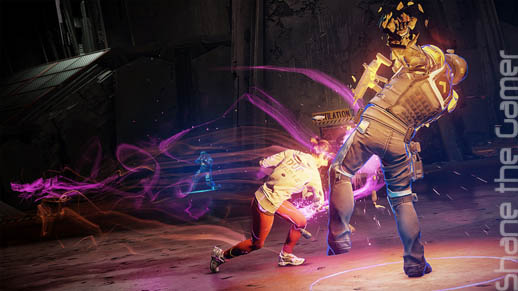 The main story missions seem a little more varied than Second Son, and will have fetch solving crimes using hacked street-cam footage, battling vehicles atop a moving truck, hacking drones, locating hostages etc. This can perhaps be attributed to the more concentrated environment and faster pacing.

Unlike Delson,  Fetch’s powers are focused purely on neon.  As such, she has unlimited neon run right from the start, so navigating the world is immediately fun and fast. The action is also concentrated to the northern island of Seattle, so getting from mission to mission is snappy and makes the whole experience feel like a speed-fix. 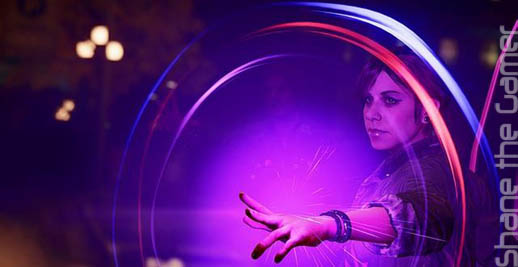 First Light is almost a fully realised game of itself, at well over five hours of side missions are also given some love. As well as a balanced and fun storyline, Fetch has a variety of side quests that are opened up early on. These include races to catch Lumen orbs through speed-boost neon gas clouds, gang busts, drone location, neon graffiti (not as inspired as Delson’s equivalent in Second Son) all designed to build experience points and purchase unlockables.

It’s an experience that redefines what DLC content really should be about. 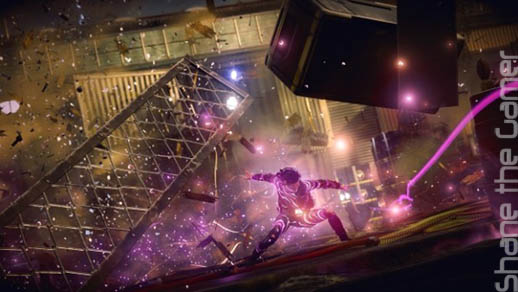 First Light will not revolutionise the game for those unsold by the mechanics of Second Son, but if inFamous has been sitting aside for some time this might just be the motivation you need to give things another go-around.