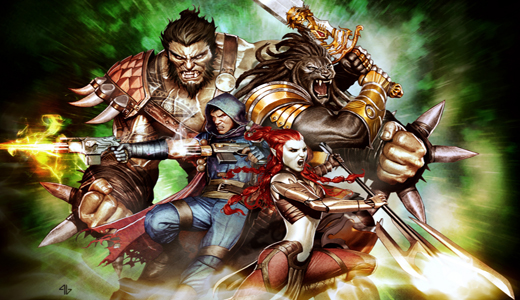 Can YOU be the Hero?

Currently there is an onslaught of high calibre of games being released, and the trend does not seem to be slowing down.

What we have come to expect from a console title, generally exceeds our expectations, with portable gaming being no exception.

Heroes of Ruin is 3DS exclusive 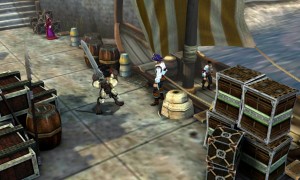 and the first and only true RPG on the handheld device.

At the onset, you select one of the four available character classes; The Vindicator – a Warrior, Gunslinger – a drifter vagabond type character, an Alchitect who is an Elven magician and the Savage whose greatest ability is his strength.

All characters hail from differing lands within Heroes Ruin’s realms and of course they are unique with their abilities, skills, strengths and weaknesses.

Depending on what type of gameplay you are wanting will be reflected by the character you choose. 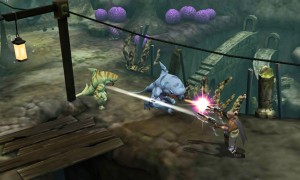 Once chosen, this will be you for the entirety of the game (only starting a new adventure will allow you to try a differing class).

You are a mercenary, able to align yourself with others if you choose to, or go through alone. Your fighting against an evil force of as yet an unknown nature who is behind a deadly curse.

Everything plays out within the World of Veil, which is devastated after a crippling and destructive battle called the War of Ruin.

War first broke out when an ancient empire fell into ruin, and left several pockets of magical power, named Ruinbursts scattered and embedded throughout the lands. War was only ended when Ataraxis joined forces with other mighty entities and utilized overwhelming power to conclude the skirmish. 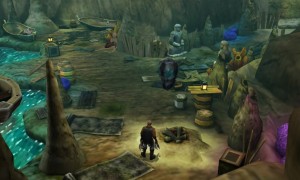 as the Ruinlords, they founded the majority of Veil’s present cities. One hundred years after the war, Ataraxis, now Ruinlord of Nexus, has been cursed into a deep sleep.

The Ruinlords’ son and Prince of Nexus; Solon leads an expedition to an area called the Coral Tombs. You are a part of this legion.

Not all goes quite as planned and whilst en-route the team is attacked by a Leviathan whilst still at sea. The ship is destroyed and a lot of the crew killed.

Solon, his brother Adrian and yourself survive and begin to look for a way to get back to Nexus. The only option is another boat which is being fiercely guarded by monstrous creatures called Ickthids.

There are many characters that you will interact with, in fact almost every character in the game can be conversed with, some offering assistance, others with Missions either side or main ones and then there’s folk that have very little to say. 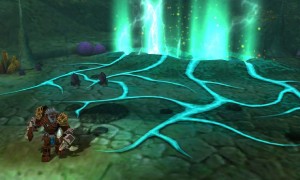 Like any other RPG, as you go throughout the many and varying landscapes in this 3D third person action adventure there is a plethora of pick-ups. From Gold which you can spend at merchants through to items that you either equip or sell off, stored within your Inventory.

For a portable game, I was expecting the storage capacity for your loot to be rather small, it’s not.

Your character is also, of course upgradeable by way of a tree system.

Using skill points, once enough XP (Experience) is gained you choose what it is you want to upgrade, Strength, Magic, Stamina and so on.

You will come across quite a varied selection of creatures and monsters, with their own varying Level’s. Tackling a higher Levelled enemy rewards you with more XP.

What sets this title apart from being just another RPG is the online factor. 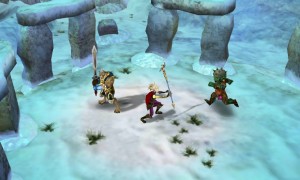 and Spotpass you can undertake Daily and Weekly challenges set by either other online players of the game or Developers; Square Enix themselves.

These are unique Missions and every one of them is different. You can also drop in and out of Online play as you wish, create alliances, join parties, play co-op – the Online factor of Heroes of Ruin is the very core of this title and is an ever changing evolutionary eco-system of others Heroes within the realm of Ruin.

Streetpass also allows an in-game trading system, whereby you can sell off items within your Inventory to other online players and likewise, buy their stuff, using a points system. 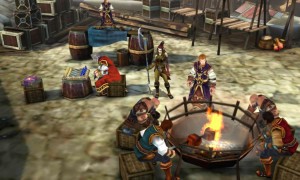 This is a great way of obtaining rare and powerful items that you may have otherwise overlooked or can’t be bothered searching for or completing the objective to obtain them. There are also ‘Trader Network’ exclusive items that cannot be found within the game itself.

A new Challenge everyday, new Rewards everyday. Play as you want, how you want, Online or Solo.

Join an exclusive community where Online Challenges will become a part of your daily routine, if you let them.

Heroes of Ruin, exclusive to 3DS is a game that just keeps on giving. 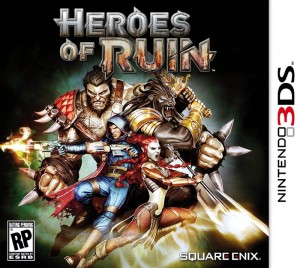