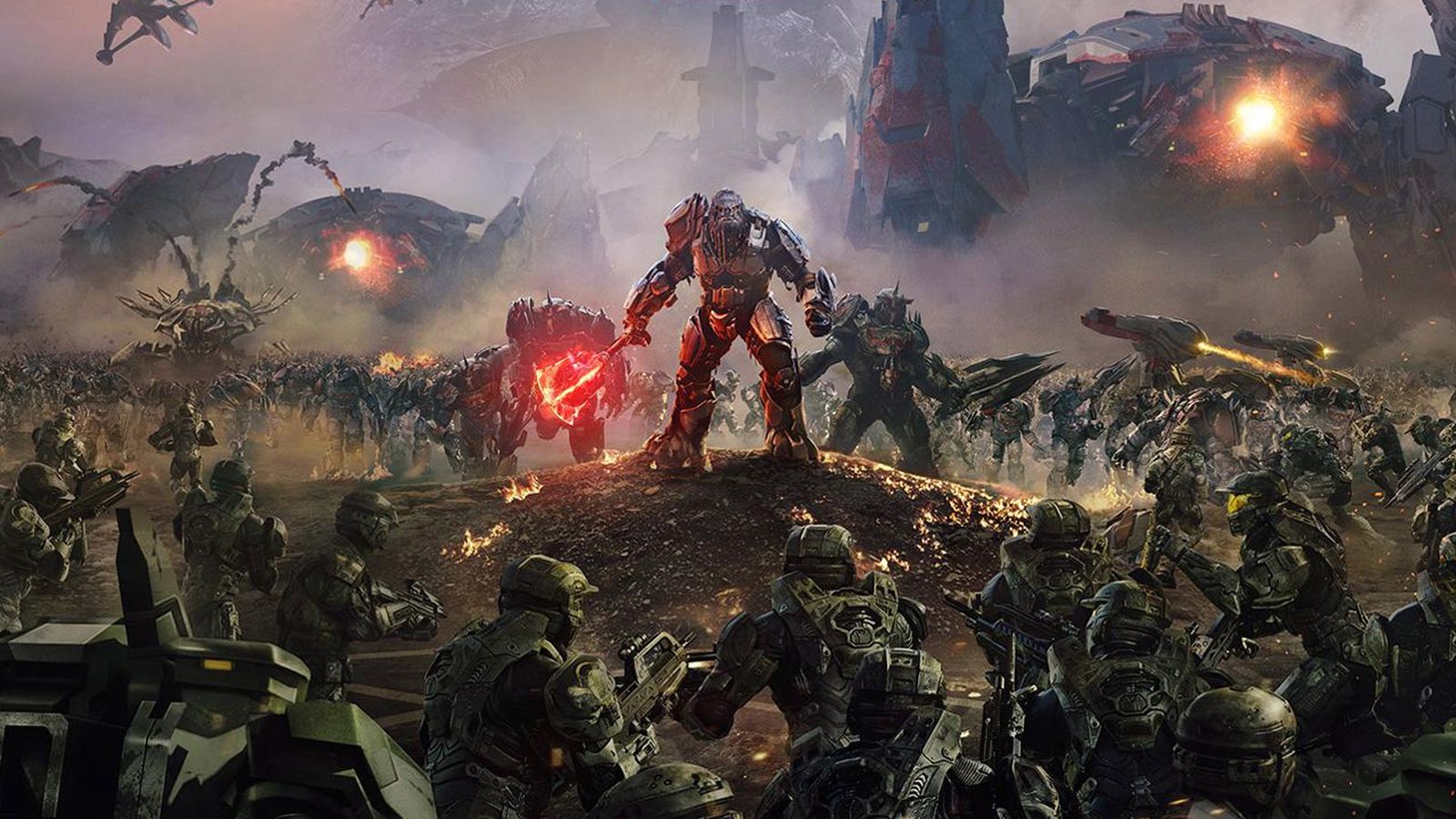 Eight years ago, with the first Halo Wars, Ensemble Studios accomplished the impossible, they made a console real-time strategy (RTS) game that actually worked. Halo Wars 2 sets out to be even more ambitious than the first, this time trying to get a RTS to work simultaneously as both a console and a PC game. Tasked with trying to achieve this impossible task is renowned strategy game developer Creative Assemble, the developer behind the critically acclaimed Total War franchise.

The game follows on from the story of the first Halo Wars. The Spirit of Fire crew awake to find themselves adrift in space at the strange forerunner installation, the Ark. From there they encounter the rogue Brute warlord, Atriox, who serves as the new antagonist. Although he doesn’t get as much screen time as he deserved, I developed a strong liking to this new villain and his rather interesting backstory, which I won’t spoil. 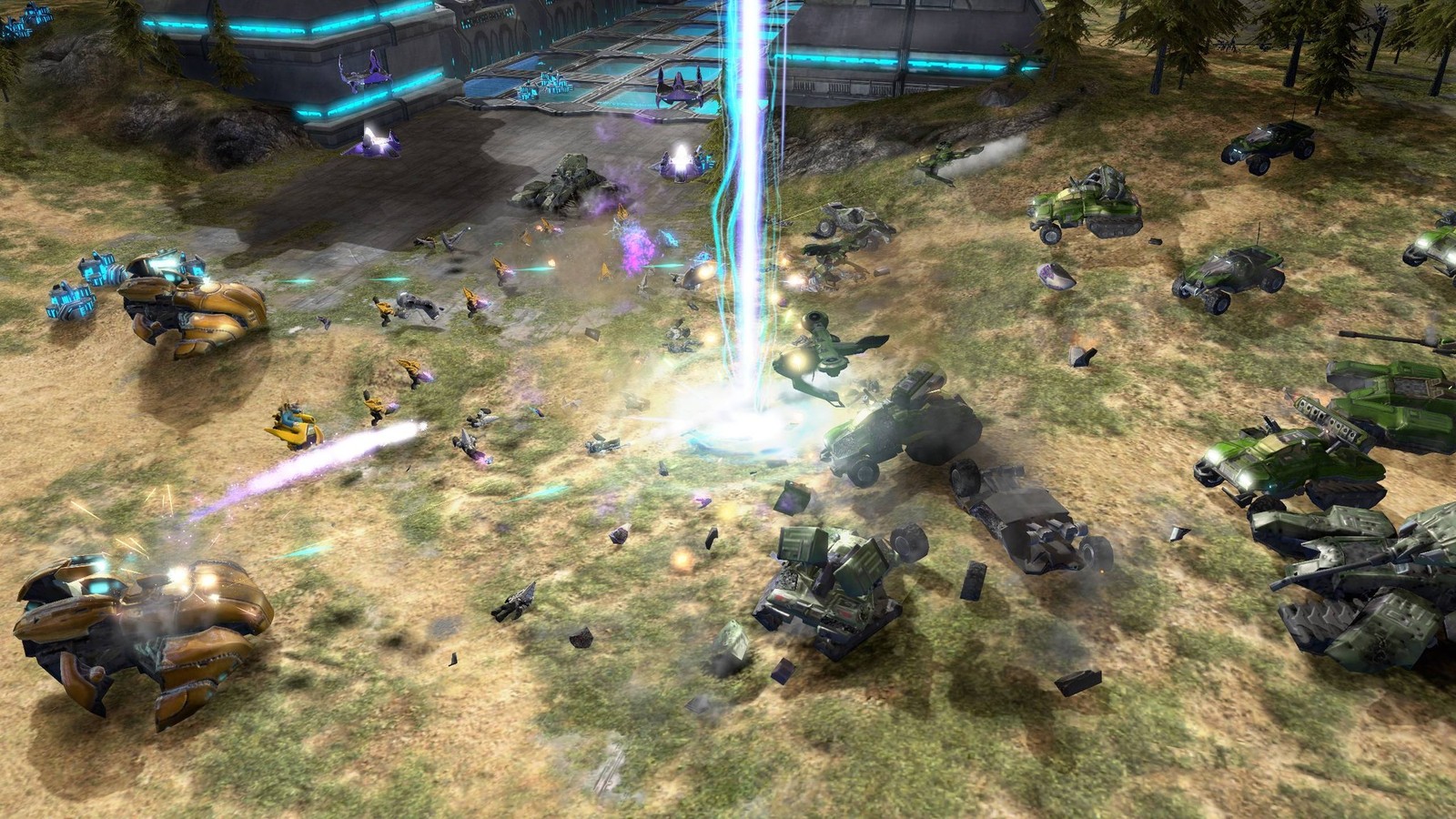 Another notable addition to the character line-up is the new AI companion Isabel, who like Atriox, is both interesting and very likeable. Although not ground-breaking, both the story and characters in Halo Wars 2 prove to be a solid addition to the Halo universe.

The campaign is rather short, spanning across 12 different Levels. Where it lacks in number, the game makes up for in diversity. Each level has its own distinct flavour and ideas, from tower defence sort of level to a more traditional base building set up. The excellent design of each level opens them up to being able to be played again.

Staying true to the recent Halo entries, the graphics are spectacular with cutscenes bordering on almost spookily realistic. These cutscenes are actually one of the standouts of the game, combining both excellent storytelling and amazing graphics. 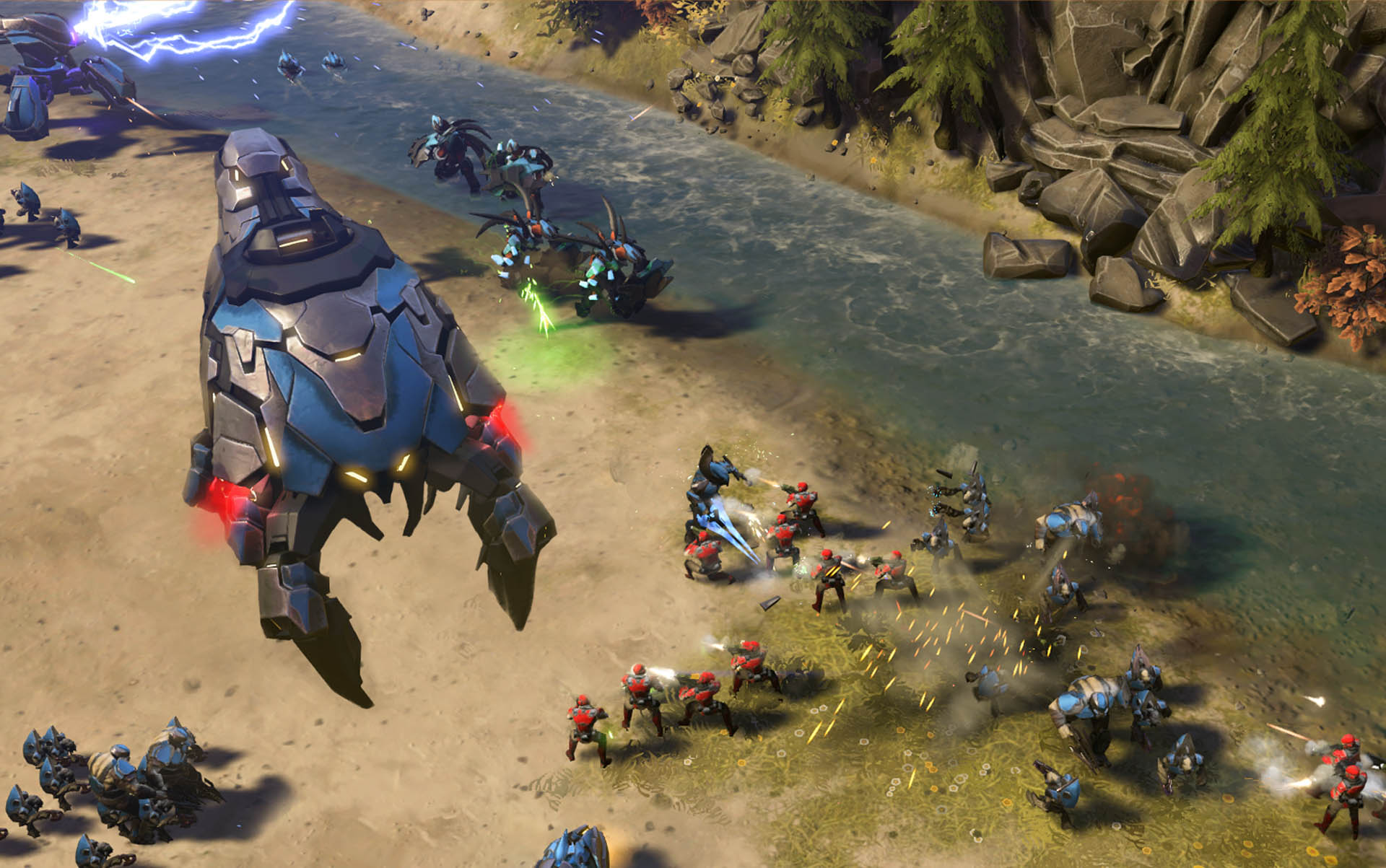 Gameplaywise, the game follows that of its predecessor very closely. While this suits consoles very well, it does make it feel a bit too oversimplified for a PC game. You only can establish bases in pre-determined locations.Each base only has a very limited number of positions to construct additional buildings on to. Like the first, there is a severe lack of variety of buildings available to construct. This does make base building and management simpler but it also makes the game feel very restrictive and takes away much of the strategy you would expect from an RTS.

Resource gathering is also very simplified compared to traditional real-time strategy games. There are only two resources. Each resource has its own building which auto-gathers resources at a certain rate.

With resource and base management requiring very little of your attention, the focus instead shifts to building units, exploring and fighting battles. This fundamentally makes the game feel more fast-paced and combat focused. 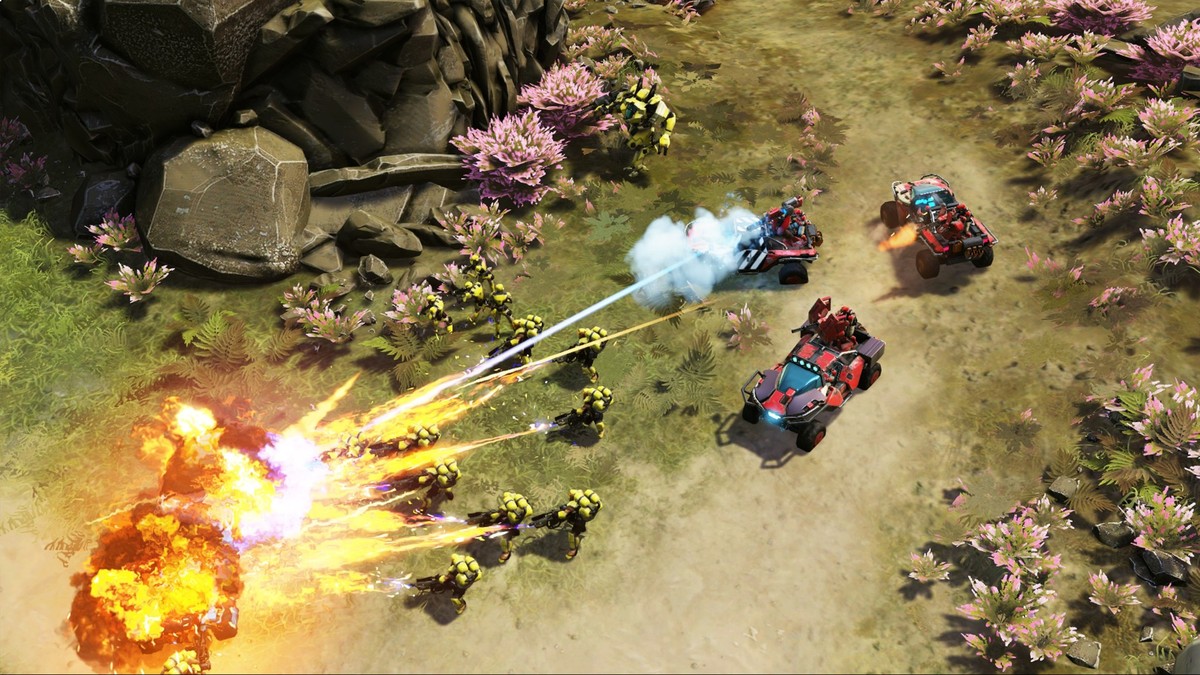 Navigating the map and selecting units is one of the few gameplay aspects that work on both console and PC. When using a controller some ultra-handy buttons make switching views between bases and units a breeze. Additionally, with a tap, or double tap, of a button you can select all units on the screen or all your units anywhere on the map. PC benefits from having these options as well as the standard keyboard mouse configuration which generally makes all this a breeze anyway.

Both factions come equipped with a nice selection of units available to build. Each unit has their own unique speciality which makes them useful for a specific thing, I didn’t find any unit type feels redundant. Some units come with a special attack option, ranging from warthogs ramming into the enemy to your infantry throwing grenades. All these special attacks are mapped to the same button  which makes trying to get a specific unit to use their special ability a bit tedious. 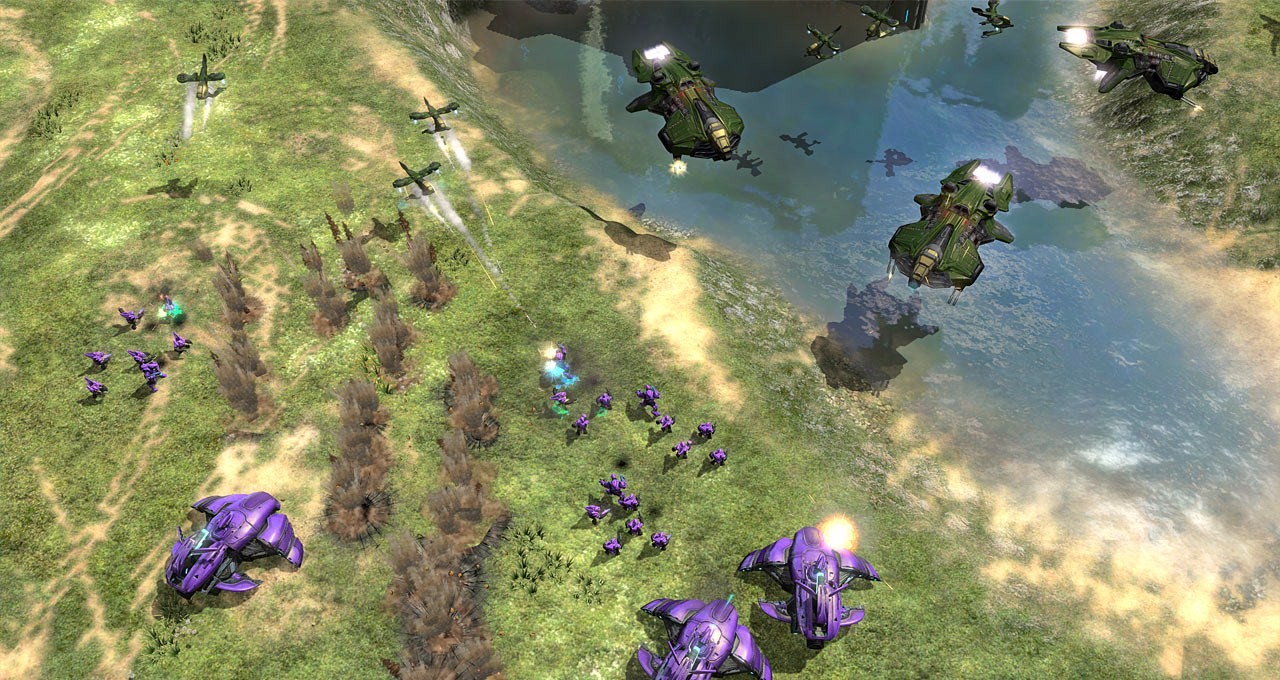 Outside of the campaign, there is a clear focus on the multiplayer. While there was certainly a lot of effort put into the multiplayer, I didn’t feel that the gameplay lent itself to being a good multiplayer game. I found the tide of battle in most games tended to snowball for one team, meaning you can figure out early on whether the game is worth playing or you should just quit now. This boils down to the game being very attack orientated and there being very little you can do for defence. Once a team starts getting the advantage, their advantage just seems to keep growing and it is very hard to stop it. The rules in the various game modes and the maps actually seem to encourage this snowball effect rather than try and balance it.

With a strong campaign and gameplay suited to a controller, Halo Wars 2 shows us that you can have great real-time strategy games on consoles. The overly simplified base and resource management gives the game a very fast faced attack-focused vibe. This simplicity does take out much of the possible strategy, making it not a particularly great choice for strategy game enthusiasts.