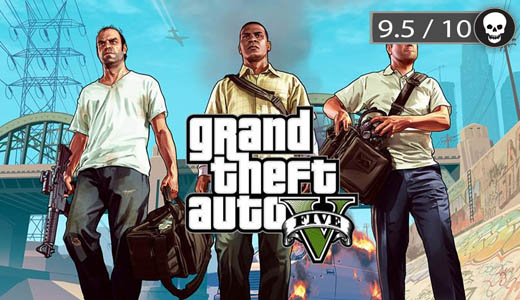 Rockstar Games is back with another entry in the hugely popular Grand Theft Auto series. While I have enjoyed previous entries into the series, I never really saw them as my sort of game.

Despite that, like most in the gaming world, I was swept away into the hype in the lead up to the release of Grand Theft Auto V. I’m happy to say in every way Grand Theft Auto V managed to live up to my expectations.

This over-the-top third-person open-world action-adventure is set in the fictional state of San Andreas, focusing on the city of Los Santos and the surrounding redneck filled countryside. I still find it hard to comprehend how huge the map actually is. Every area on the map comes across as really well planned out and it actually looks and feels like it is an actual place. Driving around the rich neighbourhood in town for instance means you will come across upper-class cars, houses and people; making everything seem that much more real and alive. 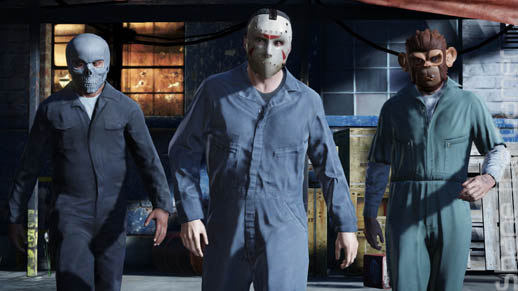 One of the biggest surprises for me in Grand Theft Auto V was how deep and emotionally engaging the story is, while still managing to be utterly hilarious and absurd. You play as three characters: a wannabe, a has-been and a complete psycho. Each character has a well developed personality which plays out brilliantly in each situation. Franklin, the wannabe, probably comes across as the closest to a good guy as you are going to get. While still a violent criminal, he does actually seem to care for those around him. Everyone else you meet seems to care little for others. 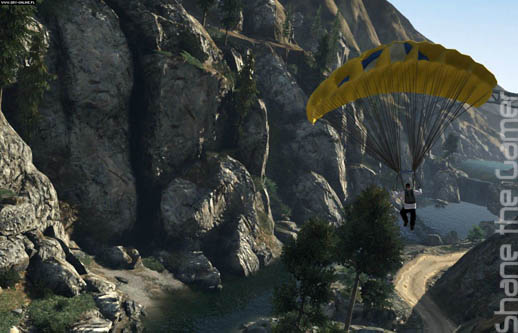 Next there’s Michael, a has-been who seems very sensible and intelligent but is still trying to find himself. He has a very dysfunctional family to look after that he doesn’t get along with. The third character, Trevor, probably grew on me more than any other characters. His answer to everything is violence and killing. His utter madness when dealing with situations continually provides for many laugh-out-loud moments. 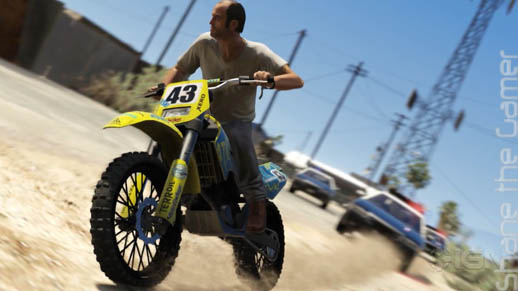 Each character has a unique special ability. Franklin can slow down time while driving; this makes those ‘tight fit’ situations as you are speeding down streets that much easier yet none the less cool. Michael can slow down time during combat which helps you take down targets easier and Trevor has an ability which increases his attack and reduces damage done against him. 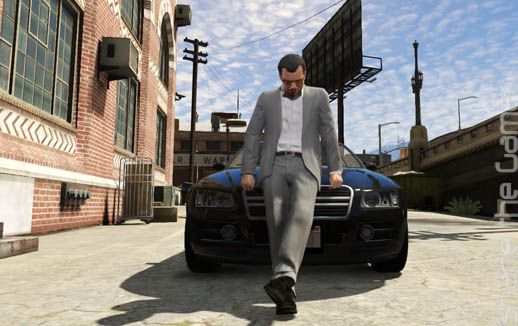 A cool feature of Grand Theft Auto V is the ability to switch between characters on the fly. If characters are in missions together, this switching is basically instant. This allows for a more tactical approach to big shoot outs. One character might be on the frontline while another might be sniping from a nearby building or one character might be driving while the other is shooting. This allows you to choose whatever sort of combat you prefer or is best for the situation. Outside of missions, switching to another character usually takes you to an often amusing character set-piece; such as Trevor waking up almost naked on the beach surrounded by dead bodies or lecturing a guy tied to pillar under a wharf after beating him up for talking ‘unkindly to strangers’. 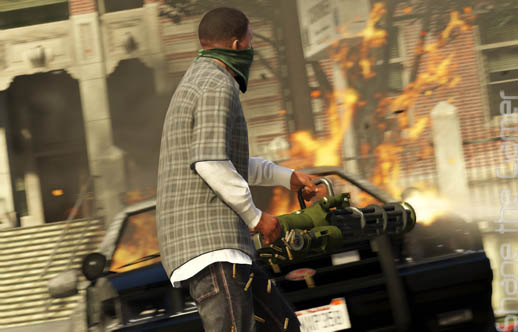 My favourite part of this game was the heists. These main story missions involve you undertaking very complex burglaries at various locations for money or other items. Each heist has preparatory missions such as scouting out a place and obtaining certain vehicles, such as fire trucks or pest control vans, as well as uniforms for the charade. Most heists have two approaches to choose from, which you select prior to the mission. For the bigger heists you need to recruit some specialists to help out. Specialists have varying degree of skill which correlates to how much cut of the score they will receive. Each heist mission feels epic and satisfying to complete. My only wish is that there were more of them as they were extraordinarily fun to prepare for and play. 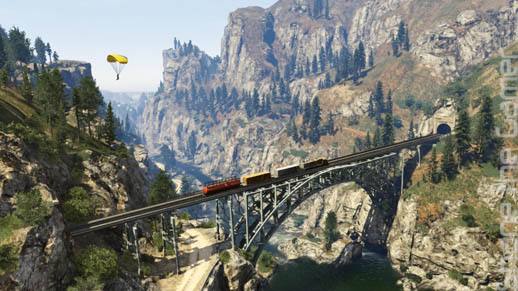 Phones also play an important part of the game. Characters receive emails, calls and texts via their smartphone called the iFruit. At any stage you may bring out your phone read these messages or decide to phone one of your contacts. Disappointingly, your contacts almost never answer the phone unless it is part of the story. This is unfortunate as a random conversation could be very enjoyable. You can also use your phone to access the stock market where you can buy and sell shares. Company share prices also react to what happens in the story. Assassinating the head of the company for instance will make their share price drop and their competitors rise. This allows for a quick and easy way to make money. 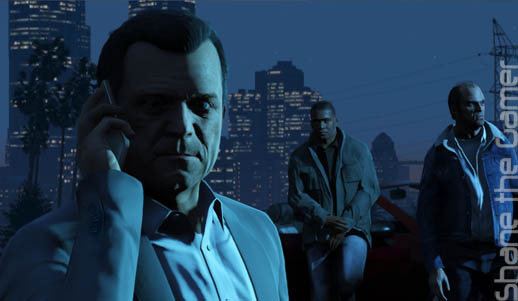 The side missions in this game are called Strangers and Freaks. These missions involve completing tasks for some very weird characters. These are mostly hilarious and fun to complete. These missions vary considerably and help provide a break if you don’t feel like doing the next story mission just yet. Outside these missions there was still a ton of stuff to do to like playing sports such as Tennis, Golf, robbing convenience stores, completing jumps, going hunting, helping out strangers who get robbed and overall causing utter chaos. While most of these features weren’t as well developed as I would have like, they still help make this world seem so much more interactive. 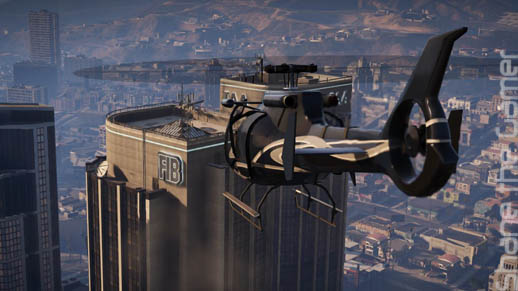 The gameplay in Grand Theft Auto V is very much like its predecessors. Shoot, kill and hide. The weapon system is, for the most part, really good. Weapons are obtained by picking them up off dead bodies or through buying them at the local gun shop. Upgrades such as suppressors and flashlights as well as explosives can also be purchased through these outlets. There are a great variety of weapons to choose from including RPGs, sticky bombs, shotguns, grenades, machine guns and pistols. This wide variety allows for a more personal touch in how you deal with situations. 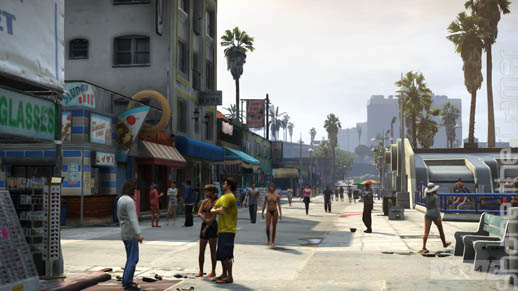 The game features a very good cover-and-shoot system. Killing an enemy causes the screen to flash slightly. This is great as it allows you to know whether you have killed them or whether they have just fallen to the ground in pain. The only problem I had with the combat was the crosshair on the screen was a tiny little dot. Sometimes I lost this dot amongst everything else going on in the screen. 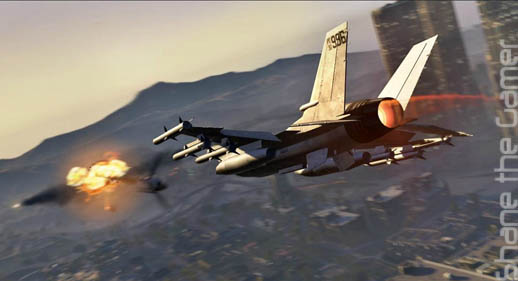 There is a enormous variety of land, air and sea vehicles spread throughout the world. Land vehicles are primarily ‘acquired’ from other San Andreas citizens. They can be upgraded, repaired or stylised at one of the vehicle repair shop located throughout the region. I unfortunately never really got the hang of the air vehicles. The controls for them are very distinct and much more realistic than most games I have played. My skill level never reached a point of competence. Nevertheless, I still greatly enjoyed flying them and attempting to land them, usually at disastrous results. Sea vehicles are also a lot of fun to use but unfortunately aren’t featured very much in the main story. 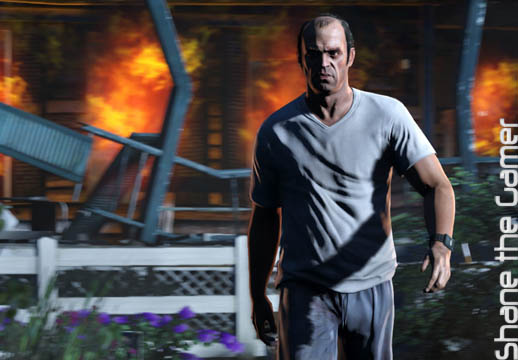 Committing crimes results in you getting a wanted level; this is based on a five star system which affects what type of law enforcement agency pursues you and what tactics they employ. The rating depends on how long the pursuit has been going for and the type of crime committed. The pursuit ends when the police have lost you for a certain amount of time, you are arrested or you die. If you are arrested, you lose all your ammo which makes this a very undesirable option. Dying takes you to a nearby hospital where you lose a small fee but keep your weapons. 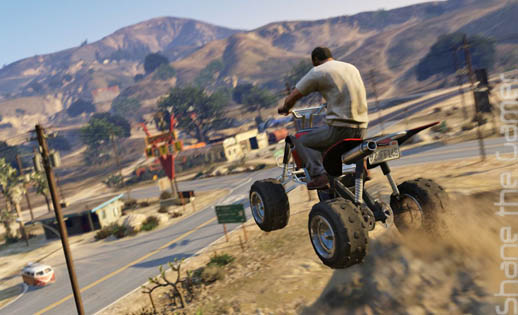 You are also able to purchase properties such as garages and businesses. Garages give you a place to store your favourite vehicles so you can come back and get them at any time. Businesses provide for either weekly income or missions that allow you to receive money. I did feel that the weekly income was a little bit too small to make buying property seem that attractive. 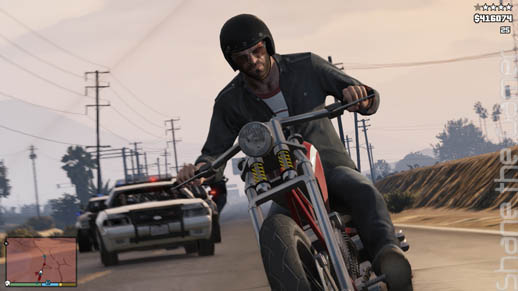 The voice acting is outstanding. Each voice suits the character perfectly. This is combined with a great script that helps highlight the unique personality of each character. The sound effects are great, everything sounds like I thought it should in real life. Music is mostly featured in the form of radio stations for your vehicle. There are a heap of widely varied radio stations to choose from. There are also ads featured on the radio which do a great job of mocking various industries and problems with the world. 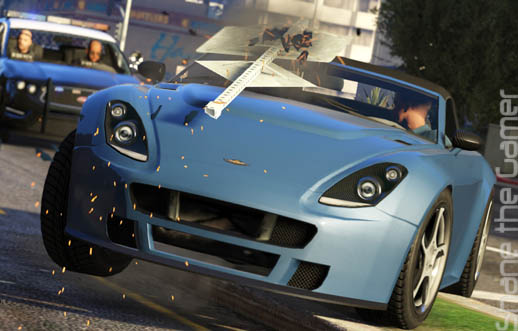 Despite all the great things about Grand Theft Auto V, there were a few areas that let it down overall. The graphics are good but far from the best I’ve seen. There is also a large amount of fogginess in the distance which means distant scenery doesn’t look that great. I experienced some bad frame rate issues on the PS3 version I was playing. The frame rate seemed constantly low and had drops even while I was just driving around. I think all of this is a show of how much they were pushing the now very outdated hardware rather than poor development on their part. 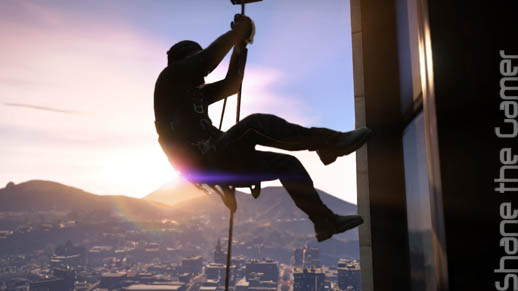 Probably the worst part of the game for me was the torture mission. This mission seems both unnecessary and disgusting. You play the part of the torturer where you get some information out of a person who clearly doesn’t have the desired information. You must choose your torture weapon then do a miniature quick time event. As an example if you choose the pliers you must hold down one button to grab a tooth, then press another to pull it out. The controller uses vibration as feedback to what is happening to further draw you into the situation. To me this was sickening and I don’t think there is justification for it. It is clear that Rockstar is trying to put across the message that torture doesn’t work but this is not the way to go about it. 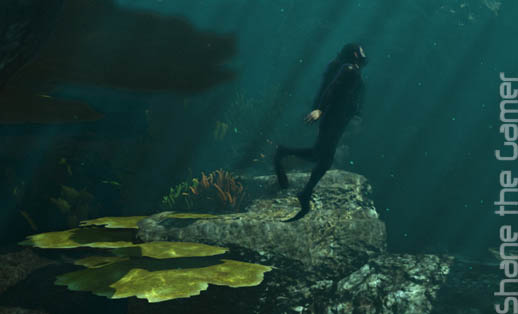 There was much anticipation for Grand Theft Auto V and I’m happy to say that Rockstar Games has more than delivered. I would easily say this is one of the all-time best games.

The story and gameplay is as close to perfect as you are going to get. There is so much to do and see in San Andreas ensuring countless hours of play outside the mammothly long story. A word of warning, this is an extremely violent game with an awful lot of swearing so this is definitely one you do not pick up for your kid.