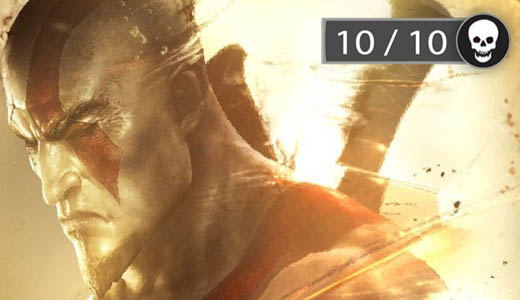 On a path of both redemption and revenge, the grey skinned, menacing hulk of retribution graces our PlayStation 3’s for another epic bout. Before he was a God of War, he was a mere Spartan and family man.

Ascension is the 7th installment in a series that defined third person action gaming on the PlayStation 2 with the first title releasing in 2005.

This chapter is a prequel to all that have released so far, and delves us into a story where we see at times a more humble and somber Kratos than has ever been exposed before. 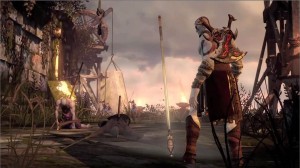 knew Kratos had a human side, and could show any form of emotion other than anger.

Bonded by Ares after he was tricked into murdering his family, the events are set 6 months after the slayings and 10 years before the first God of War game.

As anger wells up inside him and flashbacks of better times haunt him he seeks his freedom.

Kratos begins a fight to break his bond with Ares, but to do so, he needs to take down a set of  three Furies, who also have their own agenda.

The Furies play with Kratos’ mind, manipulating his reality, feeding off his regret, making him question himself and express all manner of emotions. 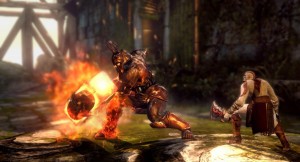 The three Furies are sisters, who can take various forms, have many creatures under their command, including the mighty hundred-armed Hekatonkheires, the first dishonoured creature that the Furies, (who are not aligned with any God’s and hold any agreeance with anything other than eachother), tortured mercilessly and wield as a weapon.

Gamers that have played any of the previous titles will be back in familiar territory as controls and third person camera aspects have remained the same.

Naturally Quick Time events (which the first God of War championed) are included and are pretty much rife throughout all of the play. 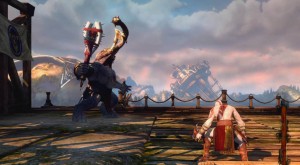 weapons and Powers have been added whilst retaining the tried and true ‘Blades of Chaos’, which can be fused with magic abilities acquired from the Gods.

Lightning of Zeus, Ice of Posiedon Fire of Ares and the Underworld powers from Hades are all in-game selectables via D-Pad and are upgradeable by way of Red Orb collecting.

Other Powers you will earn are through items that you will obtain at game specific intervals. The Oath Stone of Orkos allows Kratos to double himself, which will aide in many of the puzzles throughout the latter part of the game and Eyes of Truth reveal required solutions, to name just a few. 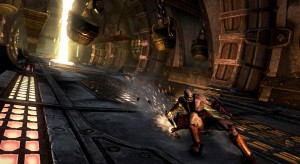 At times there are weapons found within areas, Spears as an example, give you the ability to throw projectiles at airborne enemies and there is a need for these from time to time.

Other items can be found for those that care to explore, and any of the 10 randomly located throughout the 30 Levels (known as Chapters) offer there own set of benefits once obtained.

Ascension is a God of War game. It remains true to its history and simply heightens what we are used to.

You also have the Rage Meter which is two tiered aswell as power attacks that are signature to the power you are using. 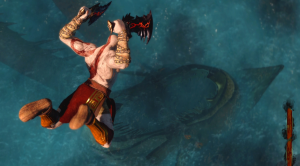 Single Play is a short-ish romp, being about 15 hours of slaughtering and puzzle solving, but the online aspect makes for an endless battle of satisfaction.

It’s a case of Trojans vs. Spartans; Red against Blue. 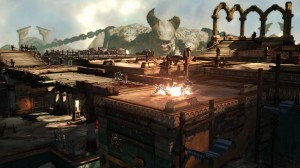 Upto 8 players can partake either singularly or in teams of two or four in varying stages of co-op, Team based objectives.

Each player is required to align themselves with one of the four Gods, this gives that gamer the power that this God specializes in.

You can change who you align with, as long as you are within the ‘Lobby’.

Abilities, weapons, armour and skills can also be upgraded via the ‘Lobby’s system with acquired Red Orbs collected throughout the multi-tiered Levels and there are Arena based weapons available to be picked up throughout play.

Powers are fully useable in each Online Game Mode. 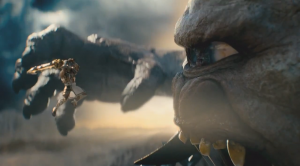 Shane the Gamer was invited to an exclusive hands on for ALL Multiplayer Modes, which were tried, tested and conquered throughout an afternoon.

Personally I was abit skeptical when I first learned of this inclusion into God of War – but it works, it fits and just makes an already top shelf series all that much more.

Asides from an onslaught of sliding and dodging aspects and cloned enemies, there is some highly mega epic moments to be had. Even more so than what we played through on God of War III. Some enemies will take up the entire screen and beyond.

This is the God of War, what it was meant to be and the final send off for the PlayStation 3 (we suspect it may be the last God of War we see on PS3).

God of War: Ascension, the best just got better. You will play this to the end, and then some. 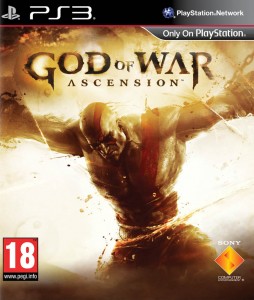