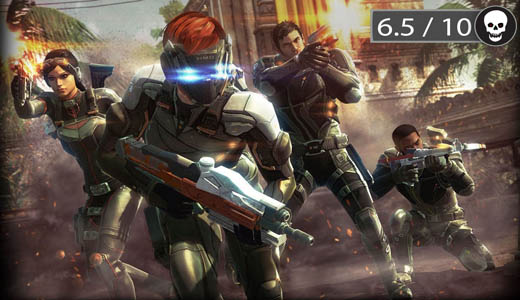 Here it is, finally, what must be the last Fuse review to cross the finish line. “Not an easy game to get into”. That would be how I’d sum up EA and Insomniac’s third-person shooter if I was allowed to write seven word reviews.

Here we have a game with four highly-trained agents, four amazingly powerful weapons and an army of enemy goons to practice using them on. All props to EA and veteran PlayStation developer Insomniac, they’re certainly not messing about with their squad-based third-person shooter. But does a good idea necessarily make a good game?

First off, Fuse isn’t much of a looker. It’s not that the visuals look awful, the graphics are just so generic, there’s just nothing to set it apart from any other shooter. Even the titular Fuse weapons don’t really have that wow factor that I was expecting. There’s also some conflicting design elements; the team’s leader, Dalton, with his huge jaw and cartoonish features is totally at odds with the otherwise serious-looking design aesthetics of the game. Every time I looked at him all I could see was Wreak-It-Ralph. I’d be happy either way, if they’d gone with an OTT cartoon style a la Team Fortress 2 or a gritty Gears of War look.

What we have here is something in between and it looks, well…alright. 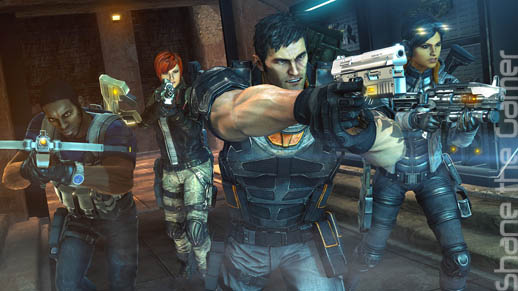 Despite being turned off by its looks, the game’s premise is sound, if a little forced. The elite four-member team of Overstrike 9 are called upon to extract a VIP from a secret government facility. When they arrive at the Hyperion laboratory they find that it has been infiltrated by an organization called Raven.

Raven is after the, possibly-alien and very unstable, power source that the scientist have named Fuse. Overstrike 9’s mission is revised on-the-fly and the team is ordered to secure and prevent Raven from escaping with the Fuse material which could be used to create the mother of all WMDs. 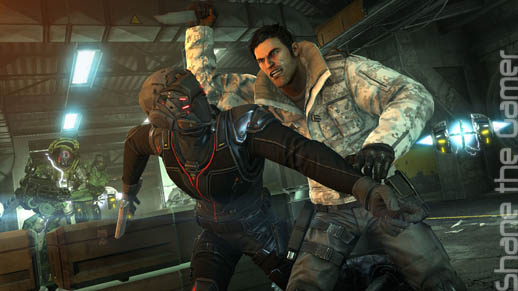 And escape with the unstable Fuse is exactly what Raven does, with our team following after them on a quest that leads them around the globe. The plot works, it does its job,  but isn’t going to blow you away.

Aside from the Fuse weapons, the core of the game is the ability to switch between Overstrike 9 agents; to Leap using the in-game term. Each Character wielding one of the unique Fuse-powered weapons discovered early on in the game. The result is an interesting mechanic, with each agent effectively a character-class of their own. 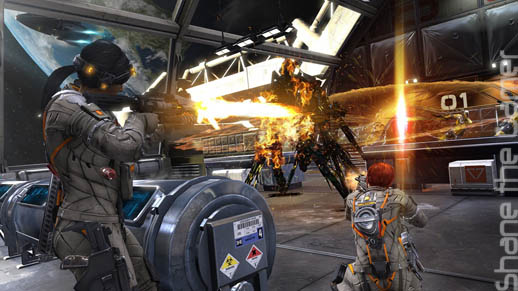 First we have the team’s leader, Dalton, an ex-mercenary armed with a fuse-powered mag shield that creates a bullet-proof barrier with a secondary attack that obliterates nearby emeries. Then there’s former police officer, Jacob, armed with a fuse weapon that makes him a very effective sniper. Streetwise hacker, Izzy, wields the shattergun, which literally crystallises its targets; she also serves as the team medic. Finally plumy Brit, Naya, who has a warp rifle capable of opening up mini-black-holes and stealth abilities. 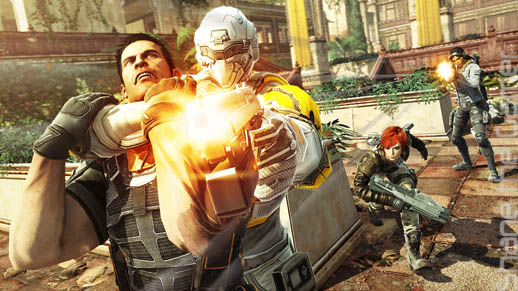 Players can either change characters according to the situation or settle for the one that best matches their play style. Each player is going to have unique experience as not once does the game force players to take control of a particular character.

Fuse has been designed with co-op play in mind. Whilst it works as single player affair, with players able to freely switch between the otherwise AI controlled characters, the campaign feels a little vacant. Even in multiplayer, teamed up with strangers on Xbox Live, the game still felt a little wanting.

It wasn’t until I played with friends that the game really revealed itself and even then it was more to do with the amusing social interaction rather than what was going on in the game. 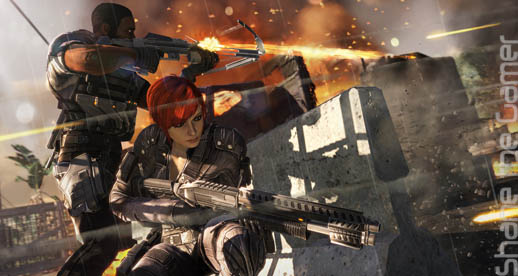 Players can purchase upgrades for both the characters’ abilities and their Fuse weapons. And herein lies the problem. I found that these super-weapons were just far too pedestrian for the first third of the game. Only then are the Fuse weapons powerful enough to actually be fun to use. Up until then they seemed all show, with more damage being dealt using the traditional firearms.

The combat starts off rather samey, as a series of carbon-copy fire-fights, shooting dumb enemies from behind some conveniently located cover. Again, is not until the characters abilities and their Fuse weapons are suitably upgraded that things start to get interesting. It’s at this time that the developers also unleash the more varied and challenging opponents. 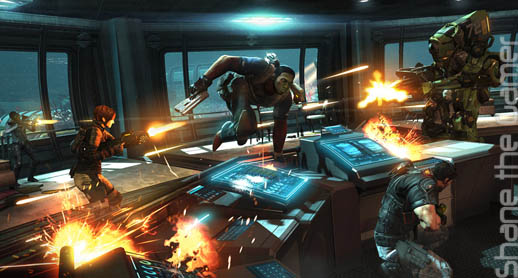 It is just a shame that it takes so long into the game for this happen. It seemed like forever that I was unloading quickly-depleted ammo into mindless enemy henchmen.

Following a familiar pattern, the game environments also suffer from blandness in the early game. Levels start as very generic metal walled corridors opening up into pretty standard-looking areas. The linear exploration/gunfight/ linear exploration/gunfight gameplay starts to grate very quickly. Any attempts during shootouts to do something a little exciting, away from your teammates, will result in trouble if you need healing, as your AI team-mates will think nothing of running through the same gunfire that knocked you down forcing a checkpoint restart. And those checkpoint locations are almost always a little too far back, resulting in a fair bit of catch-up. 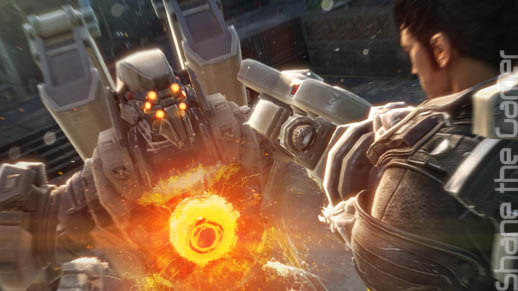 Players that persevere with the game will be rewarded by a decent bit of squad-based game-play using some truly interesting weaponry. It’s whether they can be arsed to bother, that’s the worry. I’ll be honest; if I wasn’t reviewing the game I’d not played further that the first couple of hours. I really struggled to get into the game, putting it down more than any game I’ve played in the last year- hence the reason for the delay with this review. I’ve been using any excuse not to play Fuse.

Fuse makes no effort to engage players until a good few hours into the game. Then suddenly the characters start to kick arse, the locations open up to exotic locales- moving away from looking so bloody generic, the enemies become interesting and those Fuse weapons start making a real bloody mess. 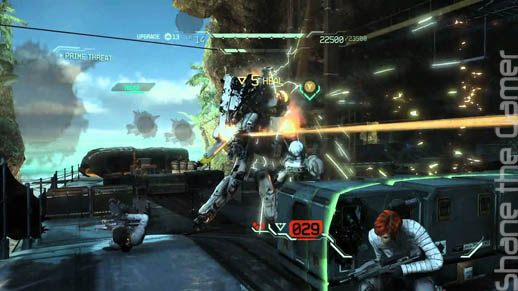 But, as soon as the game opens up, which is really when the team get to the third location – Sheng Island in the South China Sea – and those Fuse weapons come into their own – things really start to get interesting.

Those dull corridors give way to some nicely done set pieces that’ll have you shooting down helicopters and aerial mechs whilst dangling from a cable car high in the mountains and disarming a rocket on the launch pad. Fuse really makes you pay your dues in the name of character development.

Whilst I understand the need for the whole XP character advancement thing, I think that the developers hold too much back, leaving players starting out in control of a four-person rent-a-squad running around a dull-looking base facing off against the same sort of enemy goons that we’ve seen a thousand times. 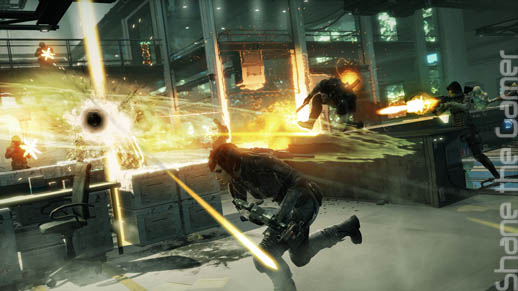 It is such a shame that Fuse plays its cards so close to its chest, as it does eventually offer up a varied and pretty interesting selection of enemies. Later levels reveal a smorgasbord of different opponents creating some really frantic combat situations. As Raven’s dopey foot soldiers give way to jet-pack equiped snipers, invisible special forces operatives and huge Leadfoot mechs, Fuse becomes the sort of heart-in-mouth stuff that’ll have you switching between characters like a madman.

Once over the hump, the more I played Fuse the more it grew on me. Instead of being some sort of gimmick, the Leap mechanic became an essential part of my gameplay strategy. And those Fuse weapons, all powered up started to do real damage chaining kills and allowing me to be more adventurous with my attacks. 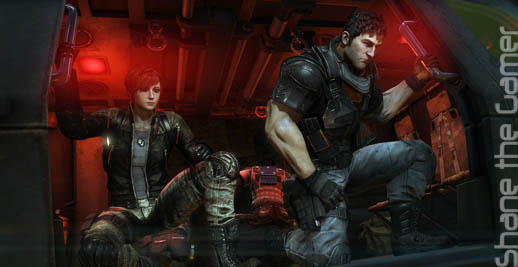 Naya’s cloaking abilities brought the combat to the enemy rather than have me just taking pot shots from cover positions. If only it was this much fun from the beginning.

As well as the campaign game, there is also Echelon mode. Immediately familiar to players of Gears of War’s Horde Mode or Halo 3’s Firefight, Echelon pits the team of four game characters co-operatively fighting against multiple waves of enemies. It can be played with one to four players, the spare slots being populated by AI bots. Just as in the campaign game, players can Leap into any AI controlled characters.

XP gained in Echelon can be used to upgrade characters in the campaign mode, which means that players are always progressing within the game. Echelon is a great way to enjoy a quick bit of Fuse. 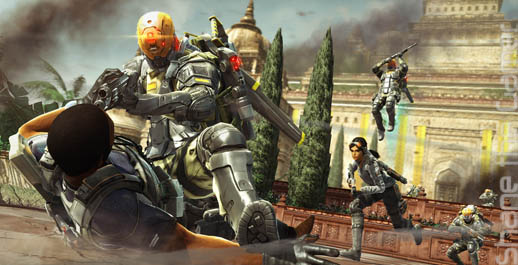 Despite the game opening itself up and becoming a rather enjoyable affair, Fuse still feels like a shooter by the numbers. Making players wait so long into the game for the action to open up doesn’t help.

I can see Insomniac’s quandary, how do you make a game with cool, ultra-powerful weapons and still provide players with a challenge? Well, you don’t do it like this. Yes the Fuse weapons are powerful, with cool effects and all that, but judging them on their effectiveness for the first third of the game, they could have been substituted for hardware from any number of similar games. I can see this turning away a lot of players.

Whilst it is no consolation to the gamers that purchased Fuse and now wish that they had brought Gears of War: Judgment instead, it is a credit to both EA and Insomniac for trying something new. 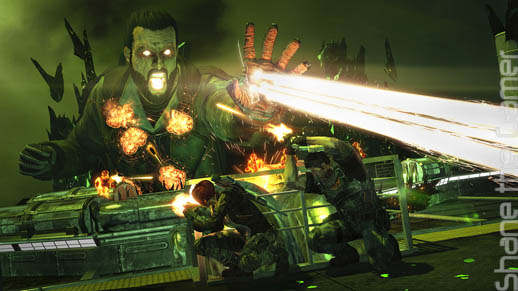 There’s a glimmer of something special here and I hope that enough units sell to warrant a sequel. I think another go, ramping up the weapons and the scale of the game, giving it a bit more variety, may do the trick. But for now, unfortunately, Fuse is no more than an average affair.