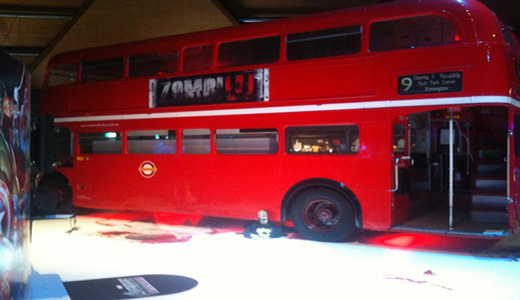 The Sunday session was definitely quieter than Saturday’s. For the first time I was able to saunter into the EB Games Megastore without having to queue up. The lines were still horrendously long for hands-on with the popular games.

EB certainly put on a marvellous show. The publishers in attendance really pulled out the stops to provide an incredible weekends gaming entertainment.  Despite all the fantastic competition, one publisher stood out above the rest. Yesterday I mentioned how impressed I was with Tomb Raider; but in my mind there was but one winner this year. As far as I’m concerned you can keep your Calls of Duty, your Medal of Honors and your Halos, the EB Expo belonged to Ubisoft.

There’s no publisher out there that can consistently hit the ball out of the park like Ubisoft. Sure, not all of their games are to my liking, but it is always down to a matter of personal taste, not in the quality of their products. 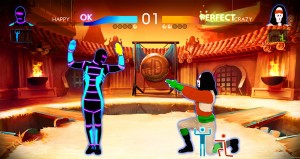 area of the show floor (Ubisoft easily owning the biggest piece of real estate at the expo) was a huge Just Dance 4 set-up with expo-goers of all shapes, sizes and cosplay attire taking turns to show themselves up. Top prize goes to the Alien from the Colonial Marines booth for getting down on the dance floor in front of a bewildered audience.

Next to Just Dance 4 was the Far Cry 3 demo booth, which had one of the most consistently long queues throughout the weekend. Hardly surprising, given how well the previous games in the series have been received. 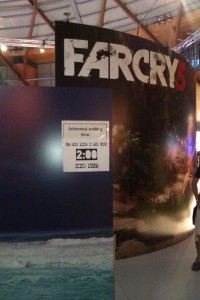 Farcry 3 forgoes the African setting of the last game and takes the series back to its lush pacific island roots. As it was explained to me at the Ubisoft booth, the game removes all the annoying things from the Farcry 2- like the gun jams and malaria and keeps all the good stuff, providing the player with a neat toy box in which to cause mayhem.

The playable demo on the show floor was an open section of the game showing of that toy box environment. Armed with a bow I took pot shots at distant bad guys with flaming arrows that set them and the surrounding area alight. It was great to see that the latent pyromaniac in me would be further sated this outing; I loved setting the grass alight in the last game.  The demo also allowed me to drive at breakneck speed along picturesque, almost deserted, beaches running over anyone in my way and reversing over anyone that I missed. The lush environment was a welcome change from the last game, offering up a beautiful, but mysterious and deadly island setting more in keeping with the original game.

I’d already had loads of fun simply hooning around the island by the time I went to check out the Far Cry 3 EB Live presentation, a live playthrough that had me longing for the game’s release at the end of November. The level on show started with some sort of ritual initiation, suggesting that your character would, though the course of the game, become a leader of some sort.

After a brief hike 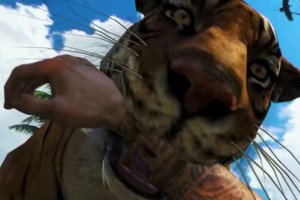 through the jungle, we came upon an enemy encampment. During the usual exchange of gunfire, the protagonist shot the lock of a cage allowing a tiger to escape and start to maul the enemy. It was rather nice game mechanic that I can see many players inadvertently falling foul of; tigers aren’t fussed with what or who they eat.

Once inside the building the scene started to become a bit trippy; the player being tormented, via a stack of TV screens, by the head bad guy, Vass Montenegro. The sequence ended with Vass goading the player to shoot him as the scene dissolved back to the jungle initiation. Very interesting, suggesting a narrative that’ll be a bit more interesting than the rather bland excuse for shooting up folks in the last game.

The other big Ubisoft title was Assassin’s Creed III, which I’d already had the opportunity to play about with the other week at a press-only event. I’d got to see even more of Assassin’s Creed III in action at the Saturday afternoon EB Live presentation in the main arena. It’s one thing to fumble around with a gamepad during a hands-on, but another to watch a developer deftly put his game through its paces. With AC3 mission director Phillipe Bergeron at the controls the audience was treated to a preview of that the Assassin’s Creed Frontier level that I’d played previously. The forest environment was alive with animals, giving the Phillipe the perfect opportunity to show off Conner’s assassination skills on defenceless furry animals. 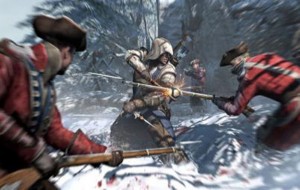 The new protagonist, Conner Kenway is half English and half Native American; which explains his weapons of choice, the bow and the tomahawk. He also has a concealed blade, similar to Altaïr and Ezio from the previous games, except this one is detachable, allowing for some neat tomahawk/knife dual-wield fun.

Following a prompt from the crowd, Phillipe engaged a not so defenceless bear up close with the bow. What followed was a Conner/bear melee interaction decided by a quick time sequence. Next up was a racoon which was unfairly assassinated from a height and a rabbit, whose death I can only describe as a sucker punch. In each case Phillipe skinned the animal gaining pelts and meat for trade and crafting.

For the next sequence the action switched to an assault on a British fort. Phillipe demonstrated Conner’s stealth abilities as he slowly moved through the encampment dispatching British Readcoats. It was interesting to see Conner move undetected through Assassin’s Creed III’s new vegetation cover areas. The sequence started with Conner carrying out some careful precision targeting before, as the number of threats reduced, he began to attack the soldiers more directly. With the path clear the objective of blowing up what I can only assume was an ammo dump, was carried out. The sequence ended with Conner lowering the Union Jack and replacing it with the early American “Betsy Ross” flag. 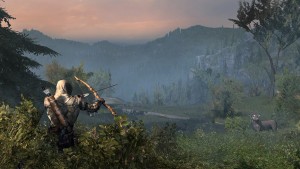 for a demonstration of the sea battle mini game. These sequences, called privateer missions, require the player to patrol an area of water on the lookout for trouble,; which invariably comes in the form of a fleet of British ships.  With Conner at the helm, Philippe weaved the tall ship between two outcrops of rock (in a manoeuvre that, were it real life, would probably have resulted in the ship running aground, but hey) and into the view of a British man-o-war. Before long Conner was surrounded and under fire from a dozen or so British ships. Battling the waves and the wind, Phillipe lined the Conner’s cannons up with the the British ships, picking them off one by one.

I’d already played a few of the sea battle at the press hands-on and, whilst they were not as technically complex as I thought they would be, they are the best mini-games in the series by far! 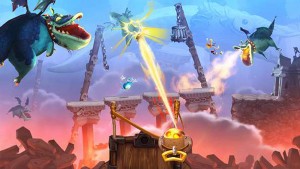 Ubisoft were also showing off their Wii U titles, Rayman Legends and ZombiU (from the inside of a London double-decker bus). Whilst ZombiU was off limits to me (too long a queue and not enough time), I was able to take a look at Rayman Legends. Making good use of the Wii U’s controller-come-display, two players are able to play at once, each with their own view of the action; one using a traditional-looking controller and eyes on the TV with the other using the display on the controller, itself.

With Assassin’s Creed III hitting the selves at the end of October and Far Cry 3 following up a month later Ubisoft are going to be putting many a smile on gamers faces this Christmas. And with Sam Fisher set to return next year with Splinter Cell: Blacklist, Ubisoft are going to continue to keep gamers happy.

That just about wraps 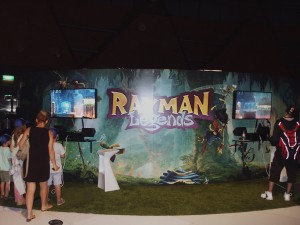 up my initial thoughts on the three days I spent at the EB Expo 2012. I’ve still got a ton of photos and pages of scribbled notes to go through. I can only see this show getting bigger and better. So if you couldn’t go this year, there’s always next year, and boy are you going to be in for a treat!

Before I sign off, I’d just like to extend my thanks to Hayley at RPM for sorting out my media pass and the boys and girls at EA Games, Ubisoft, Namco Bandai Partners, 2K and Mindscape for their time over the weekend. Without their help, you wouldn’t be reading this.