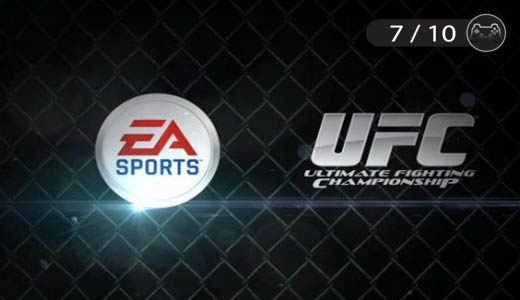 It’s time to enter the Octagon once more, this time with EA Sports UFC. The veteran sports game publisher has drafted in the team that gave us Fight Night Champions to bring this mixed martial arts franchise to life on Xbox One and PlayStation 4.

I’ll lay this down right away, I’m not a fan of UFC, prior to previewing this game a couple of months ago, I’d never even watched a UFC bout – in fact, I’ve have put it right up there with WWE in the “not proper fighting” category.

Just like the real thing EA Sports UFC is brutal and hard to master. As a game, compared to the punch-block-duck mechanic of Fight Night, it is a much more complex animal. 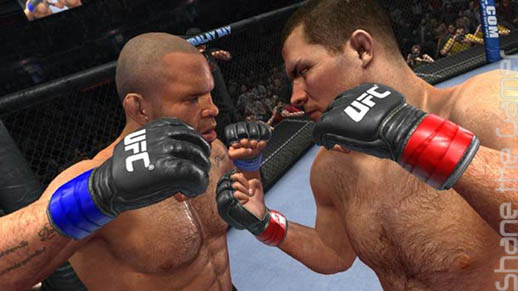 Fans of the Fight Night series will be right at home with UFC’s stand-up combat (although the block/duck/weave is a lot different). In mixed martial arts clinches play a bigger part than just being the opportunity for a little rest as they are in boxing. Controlling the clinch in UFC is an opportunity to deal your opponent a lot of damage. Ground combat was the certainly the most alien of the combat styles, especially considering the amount of damage that you can face if you don’t defend yourself. Failing to take charge on the ground will result in a submission situation.

With all the grappling in the clinch and whilst wrestling on the ground, as well as the boxing/kick-boxing means that players are confronted with a huge amount of button and thumbstick combos.  Unless you have the fingers off a ninja, new players and Fight Night fans alike are going to be faced with quite a learning curve. 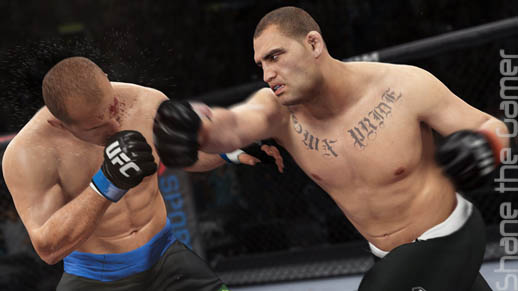 But, thankfully, the designers have realised this and have offered up numerous ways to tutor you.

For those that don’t want to mess about there’s a tutorial walkthrough that’ll show you the ropes. If you really want to get to grips with the game you really need to go through the drills in the Challenges mode.

This is effectively an advanced tutorial programme, the challenges are split up into the three fighting styles of MMA, stand-up, clinch and ground. Completing the challenges will enable you to master the punching and kicking combo, controlling and striking in the clinch and how to effectively use wrestling and Brazilian Jiu-Jitsu techniques on the ground.

So how does it all work? 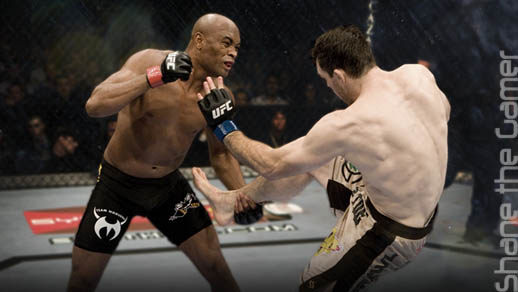 On the offensive, the Triangle and Square provide left and right punches with X and Circle doing the same for kicks. L2 modifies the attack to strike the body.

Clinches are initiated by pushing the right stick in the direction of your opponent. Combinations of L1, L2, R1 and R2 modify the clinch with L1 and pulling the left thumbstick away from your opponent breaking the clinch. 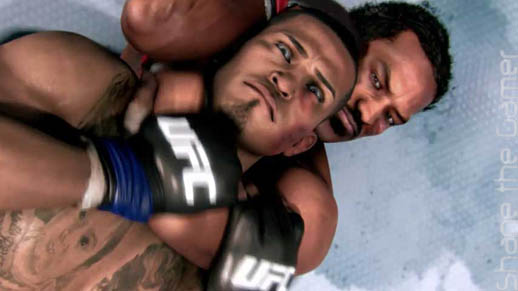 Moving the right stick left or right and twisting it up transitions the clinch, important to gain control and get into the position to unleash your fists and knees into your opponent. On the defensive the trusty R2 with the right thumbstick may block your opponent, but it’s best to get yourself in control and instead just deal the damage.

A combination of L1 and/or L2 with a left or right flick and twist up or down of the right thumbstick initiates a takedown. If you are quick and you notice your opponent going for one you can block with R2 and pushing down on the right stick.

Once on the ground wrestling for control in similar to controlling a clinch with pushing and twisting the right thumbstick changing your position (whether on top or below). There’s lots of opportunities for both fighters to throw punches with R2 the defensive button. Again, it is best to be in control. L1 modifies the right thumbstick manoeuvrings with R1 and the right thumbstick initializing a submission attempt. 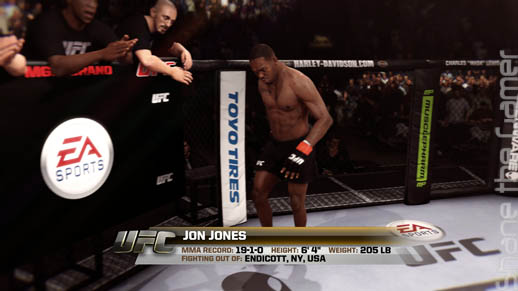 Throughout UFC, whilst complex, the control system makes sense. It’s hard to get to grips with at first, but once you understand the logic you start to process what you are seeing on the screen and counter with your fingers.

Unfortunately the game’s submission mechanic breaks this logic and presents players with what is effectively a two-player quick time event. In a submission situation the defender must, using the right stick, move one of the eight coloured bars that form an octagonal shape in the middle of screen, from the center to the outside.

Meanwhile the attacker must counter the defenders actions by pressing their right stick in the same direction to block the action. If the defender fails to break the submission, after a while a transition indicator will light up alerting the attack to push their left stick in that direction to tighten the hold. This continues until the defender escapes the hold or submits. 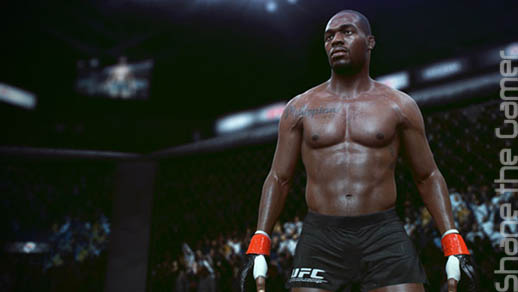 I’m sure that they could have come up with something a little less like a mini-game and more in keeping with the game’s combat mechanics for submissions. I found it quite jarring to move my focus from the fighters to a superimposed shape overlaying the action in the ring.

As you would expect, being an EA Sports game, the presentation in UFC is second to none.

The game has been developed closely with Zuffa LCC, the owners of UFC; the result is a package that is packed full of videos and cross-promotions that’s going to really appeal to fans and provide an interesting introduction to the people and characters that make up the Ultimate Fighting Championship. 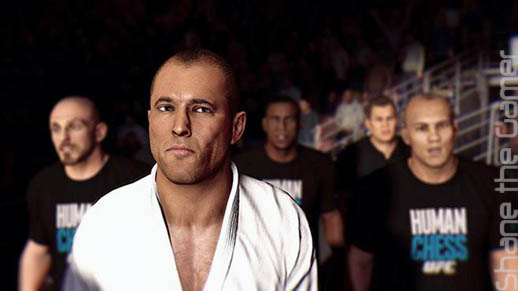 All the Pro fights have a TV style presentation complete fighter intros, commentary and post-match highlights.

EA Sports UFC is the first EA Sports game to be developed exclusively for the current-gen and if the visuals of the game are anything to go by we are in for a real treat. UFC looks bloody amazing.

Some animation transitions are a little odd, but I imagine they are unavoidable consequence of having responsive controls; a real UFC fighter doesn’t spam kicks and doing carry on punching in thin air when their opponent is on the ground. I’d also say that these iffy animations are made even more jarring because of the hyper-realistic visuals that we are presented with 99% of the time. 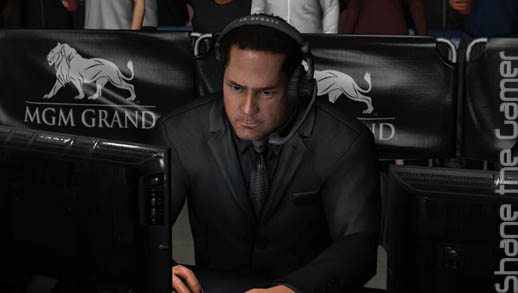 If you’ve played the likes of FIFA or NFL, the front end will be very familiar with a customised home screen highlighting your last game mode and a selection of other options to get you started.

From the main play screen you can go straight into a fight, start your Career or go online.

A quick fight gives you access to all nine weight classes, which includes the woman’s bantamweight. You also have access to the game’s full roster of over a hundred fighters plus any custom fighters that you may have made and, of course, DLC fighters (including the legendary father of MMA, Bruce Lee). 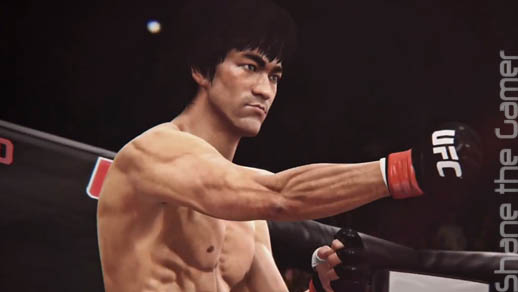 For a bit more meat, and an opportunity to get introduced to the game’s rather unforgiving mechanics, most players should head straight to the Career mode.

Starting with an Ultimate Fighter-style knock-out tournament intermixed with a series of gym-based drills that are really thinly-veiled tutorials, players are slowly prepared to become the main event. Bouts are intercut with live action TV-style footage with the like of UFC boss Dana White offering advice and encouragement.

If you really want a challenge or your arse handed to you, the game’s Multiplayer mode will do it for you. Here you can choose to have a one off fight in a weight class or with a fighter of your choice, or take part in the Tournament game which has you enter a virtual competition with other players. 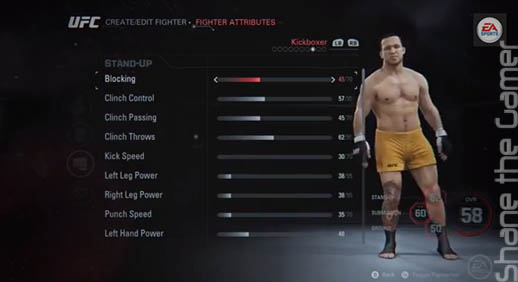 Fighternet is UFC’s online portal. The UFC Spotlight option takes you to a theater area where you can watch dynamically updated adverts and videos for real-life UFC, featured UFC game highlights, your own Multiplayer game highlights and those of your friends. There’s also access to a number of tutorials. This is also the place to view the progress of you and your friends.

The customised Menu is exactly that. But as well as the game options and music manager you can also create and view your fighters.

To create a fighter you have two choices; either start from scratch selecting feature and haircut or download your Game Face, if you’ve already created one on the EA Sports website. 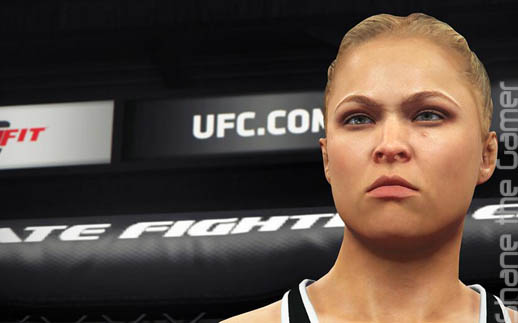 This will be the same likeness of yourself that you can use in FIFA 14 and Madden 25.

From there you assign body type and attributes to create your own unique fighter. You can then use your custom fighter in the Fight Now quick one-on-one bouts, Career or in online Multiplayer.

EA Sports UFC may not be quite as accessible as its Fight Night predecessors, but it does offer a significantly deeper depth of play. The controls are complex and, apart from the submission mechanic, are logically derived. The game is far from perfect, with some of the clinch and ground game lacking the excitement you see on TV. Indeed, the subtleties of the clinching and the wrestling element will likely be lost on the uninitiated who will still have a strong desire to just duke it out standing up. 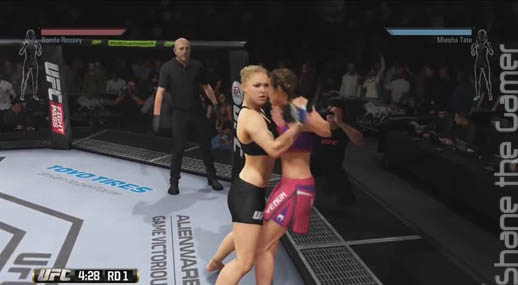 This is, however, the game to own if you want to show of your Xbox One or PS4 to your mates. The visuals are jaw-dropping.

As for the game itself, if you persevere you are probably going to like it, if not, you will probably find yourself going back to Fight Night.