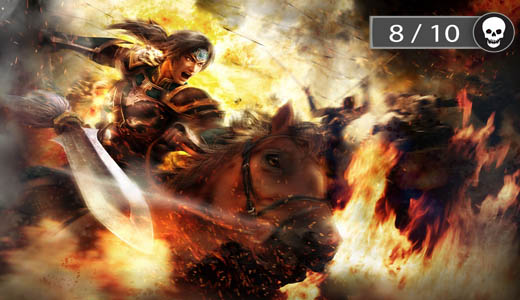 Omega Force is back with their latest release into the Dynasty Warriors franchise with Dynasty Warriors 8. This series has become infamous for releasing new titles that feel very much the same as previous installments.

As a long time fan of the series, I have always been able to look past this and enjoy each game for what it is.  The question on many people’s lips is does this latest title manage to be something decent or is it just the same old, same old.

Dynasty Warriors 8, like its predecessors, is set in the Three Kingdoms era of Chinese history. The story is loosely based on the book, ‘Romance of the Three Kingdom’, which itself is a dramatisation of historical events. The story begins with the 400 year old Han Dynasty coming to a very turbulent end and the three kingdoms of Wei, Wu and Shu beginning to establish itself. 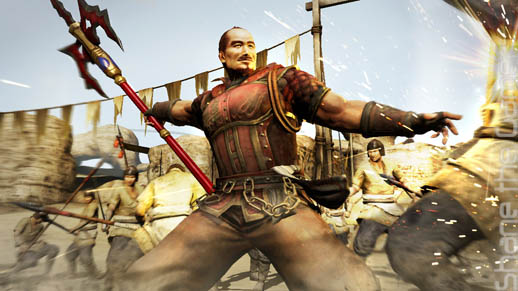 If you have played a Dynasty Warriors game before, the gameplay will be familiar to you. It comprises of you participating in reasonably large scale battles. The teams for each side basically consist of several other officers like your character and thousands of weaker soldiers. In typical Dynasty Warriors fashion, you gracefully slash and dice your way through hundreds of enemy soldiers on your way to kill the enemy commander whilst also trying to protect your own. Battles typically take 20-40 minutes depending on the difficulty and how quick you tear through it. To help break the typical button mashing, hack and slash monotony, miniature objectives are usually given throughout the level such as take this base or defeat this officer. While this may sound a bit dull and repetitive, it strangely finds its way to be both addictive and enjoyable. 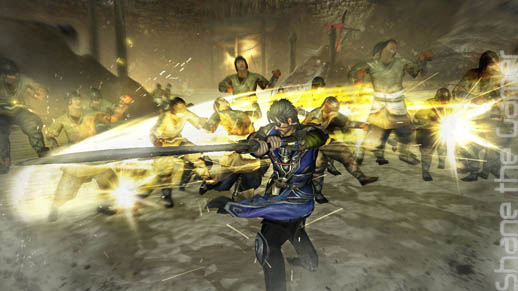 In Story Mode, you play through a kingdom based story either by yourself or through online or local co-op with a friend. You can choose from any of the Three Kingdoms, Wei, Wu or Shu as well as a later set Jin Kingdom. Each story consists of about 15 levels for the main historical path. After completion, there is also a branched off hypothetical route you can take by completing certain objectives giving a total of 20 levels for each kingdom. After going through the historical path, I greatly enjoyed playing through the “what if” scenario. Each battle in the Story Mode provides you with a selection of up to four characters to play as. By cycling through various characters, you develop a sense of connection with the whole kingdom which helps you further immerse you into the story. 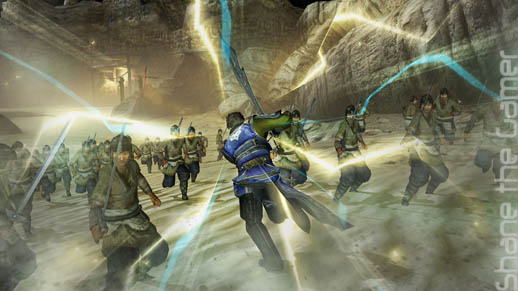 As a series veteran, I was pleasantly surprised to see this story that I have grown to love told in a much more clear and detailed manner. Between battles you are given some information about some relevant events that have occurred throughout the land as well as being shown who controls what provinces. Unfortunately, information about these events is given through text rather than dialogue. I believe this was an opportunity missed by the developer Omega Force as dialogue would have added a much more welcoming feeling of a story being told. 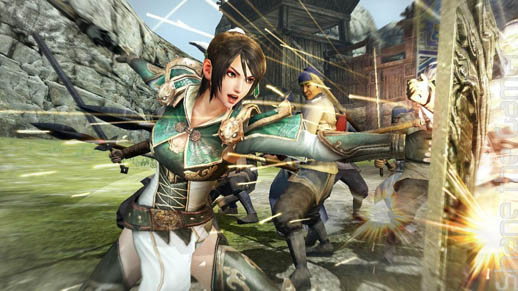 Prior to the beginning of most battles, your character starts in a fort or castle on the battlefield. Here your character can buy and sell weapons as well as interact with soldiers and other officers to gain background information on characters and the battle. If the idea of extra information doesn’t tickle your fancy, you are given the option to skip all of this and proceed directly to the fighting. As a very story focused gamer, I was deeply enthralled by all the information and random facts they provided me. It really helped further develop this part fantasy part historical universe. 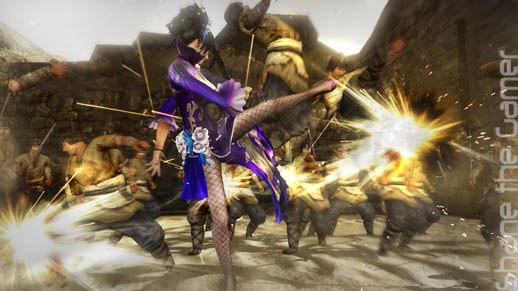 One of my most major annoyances with this game was the inconsistencies in plot details when playing with different factions. This mostly involved presenting a different premise for a battle when you play as the opposing team. Being a story-centric gamer, I couldn’t help but find these discrepancies very obvious and irritating. Just get your facts straight. 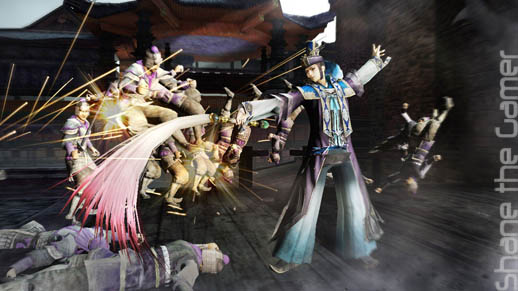 Outside of Story Mode, there is another mode called Ambition Mode. Here you play as an officer of your choosing on a mission to try and get the emperor to visit a tower you are building. To construct this tower, you participate in objective based battles where you gain materials, fame and allies. As you progress, you unlock various facilities for your camp including a blacksmith and tea house which you can upgrade by using your collected materials. 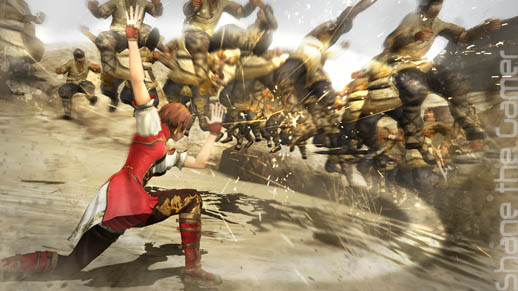 Okay, so the premise for this mode is a little bit shaky but the gameplay is spot on. Playing on a hard difficultly with my favourite levelled up officer has always been one of my favourite things to do in this series. This gave me a reason to do that. After each battle you are given the choice to return to camp or keep going. If you keep going your health carries over, the difficulty increases and your reward increases. There is also some cool unlocks by hitting certain milestones such as by making it to battle 30 three times, you receive one of the ultimate Dynasty Warriors rewards. This mode drastically extends the life of this already extensive game and provides a whole new challenging yet still enjoyable experience that was missing from the comparatively easy Story Mode. 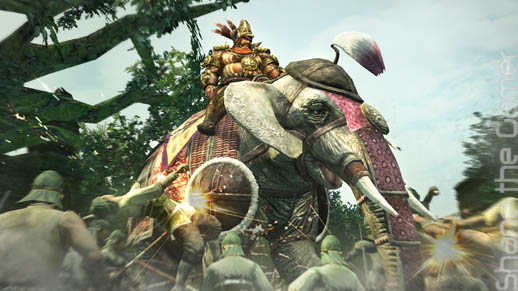 There are 77 weapon types in Dynasty Warriors 8 including everything from a spear to a flute. You may select two weapons at the start of each game. Characters are given a compatibility ranking with each weapon type; the higher the compatibility, the more damage. On top of this, each character has their own special EX weapon when, if chosen, the character can do a bonus attack combo. Weapons are gained by killing enemy officers or through buying them from a blacksmith. There is also a special 5 star ultimate weapon for each type that can be unlocked through completing a reasonably difficult character specific challenge. Unlocking this weapon for your favourite character is both fun and makes your character that much more badass. 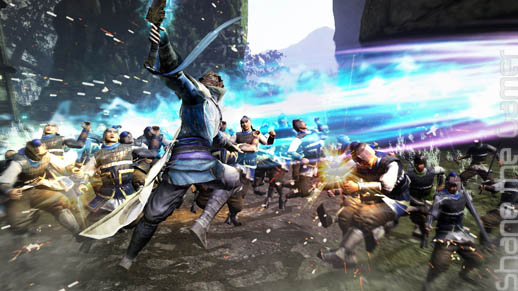 To further make combat more interesting, weapons are assigned to one of three affinities; Heaven, Earth or Man. Basically, Heaven trumps Earth, Earth trumps Man and Man trumps Heaven. This means a more strategic approach must be taken when selecting your weapons and using them on the battlefield. 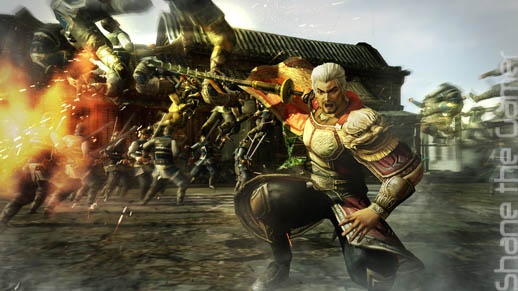 To me, Dynasty Warriors has always been about the absurd weapons and the ridiculously high kill counts; both of which seems to be very much forefront in this latest entry.  Weapons seem to have gotten crazier and more fun to use. Each weapon I tried seemed to have their own special X-factor that made me want to keep on using it. I found that instead of having one or two favourite weapons like in previous games, I had many. In terms of kill count, there were a few levels where I managed to get 2,000+ kills just by following the objectives given. Despite how easy enemies were to kill on the normal difficulty, I still seemed to develop a sense of pride each time I hit that next big milestone. 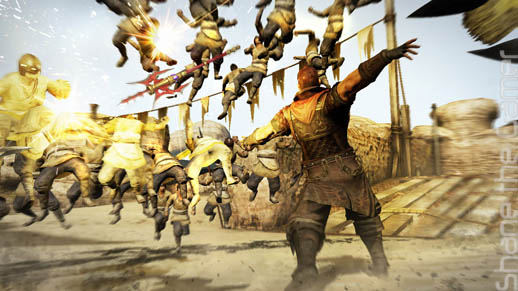 By way of graphics, the character models had a low level of detail, cutscenes seemed substandard due to very average visuals and poor lip syncing, character models were repeated and overall the visuals seemed a bit out dated. Surprisingly, none of that seemed to really detract from my experience. The focus of this game was well and truly on the addicting gameplay experience and the very intriguing storyline. I was often too busy listening to what a character was saying or trying to complete an objective to really focus on the surrounding environment and characters. 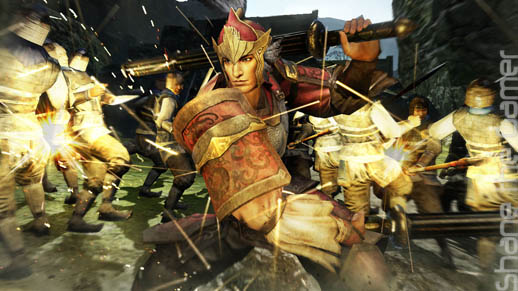 The music in Dynasty Warriors 8 was both epic and true to the style that has made this series so memorable to me. The quality of voice acting seemed to vary a lot. In unfortunate accompaniment with this, there were at times some very poor script writing. I’m not sure whether this was because of bad English translation or lack of focus but at times the absurd things characters would say was almost amusing. 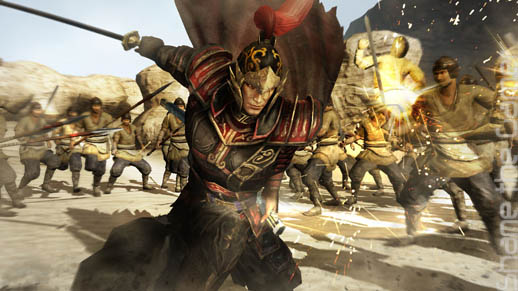 Enemy pop-ins and frame rate issues are back, to my deep dismay, although not as bad as some previous instalments. This is somewhat understandable when you consider that levels are filled with thousands of soldiers but the scale of it seemed to be a bit excessive. These issues seemed to be even more apparent when playing co-op which is disappointing to an otherwise very enjoyable co-op game. 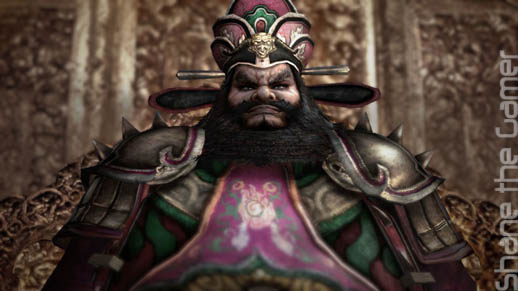 I am pleased to say to both fans of the series and new comers that, on its own, Dynasty Warriors 8 manages to be both fun and enjoyable. Due to some minor well implemented changes, I would definitely rate this as the best entry so far. If you are tired of the old Dynasty Warriors experience, these changes won’t be enough to give you that completely new experience you are looking for. While still not managing to be that perfect Dynasty Warriors game that I have been craving, this latest entry manages to take a few steps in the right direction.