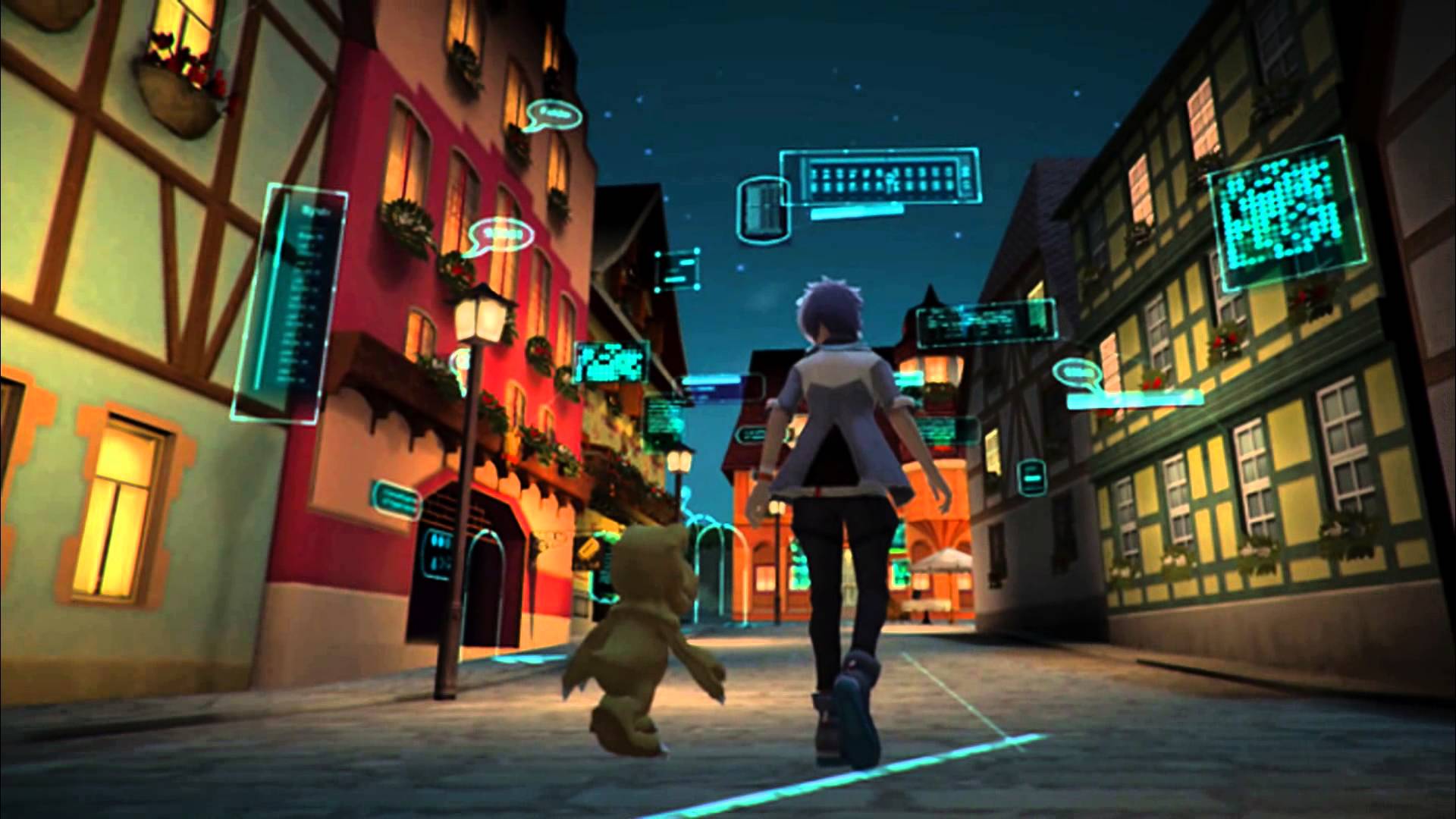 Digimon World: Next Order takes Digimon back to its virtual pet routes. Whilst primarily being a typical JRPG, the game incorporates the nostalgic gameplay aspects involving raising a Digimon. Unlike their hit portable virtual pet devices though, this experiment falls rather flat.

The story is about what you would expect from a nostalgic Digimon game. The game begins with you accidentally being transported to the Digital World. From here you meet your two Digimon partners and find out the Digital World is in trouble. With no way of getting back you set out to find a way back home and while you’re at it, save the Digital World. 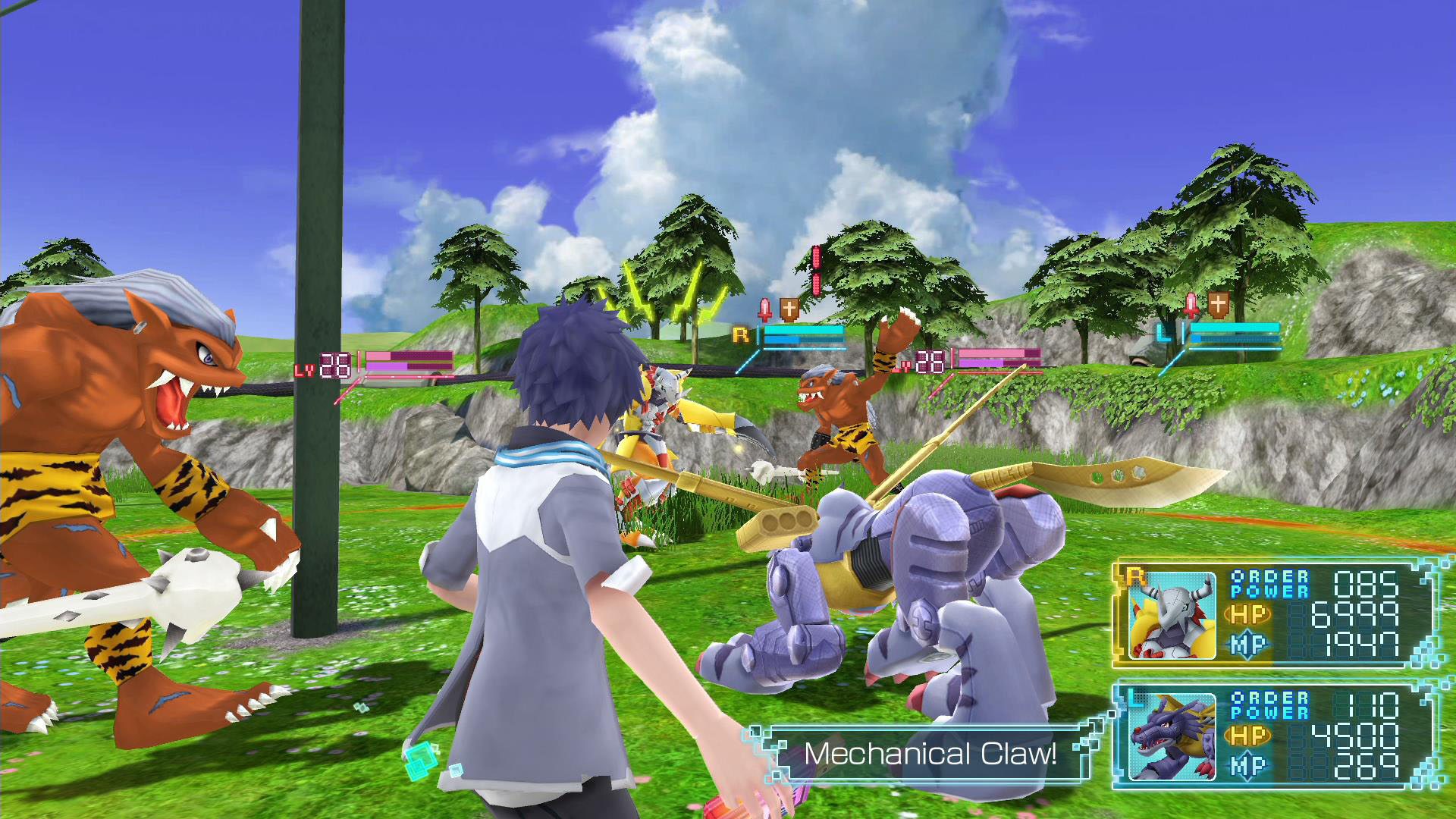 As well as the JRPG and Digimon raising aspects of the game, there is also a town building component. When you are transported to the Digital World, you appear at a town that has been nearly wiped out and the inhabitants have fled. Your job is to bring the inhabitants back to the town and start rebuilding it. On your journey out into the wild, you will discover potential inhabitants who will join the town once you complete a task for them. The Digimon have different roles in the town which will in some way help you on your journey.

The most unique part of Next Order is the raising a Digimon aspect, or more specifically raising two Digimon. While by itself may not be that note worthy, the fact that it is crammed into what is otherwise a reasonably standard JRPG is.

The premise worked so well as a stand alone portable device because it is something quick and simple, suitable for on the go. Incorporating raising a Digimon into a full blown JRPG, doesn’t quite go as well, at least in the way it is done in Next Order. 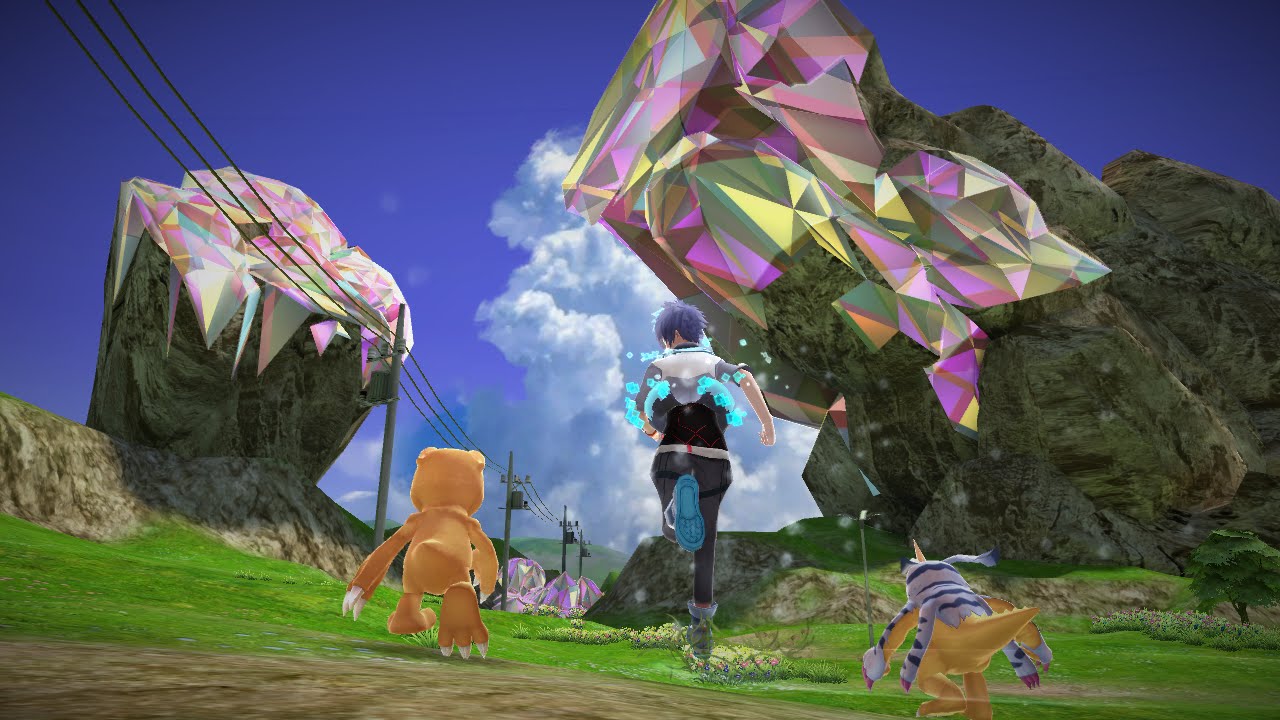 Trying to care for and raise your Digimon while on a world saving journey just breaks up the pacing and feels like an unnecessary burden. Some of the burdens you have to deal with include feeding your Digimon three times a day, letting them go to the toilet when they want, making sure they go to bed on time and either praise or punish their rebellious behaviour. When you’re on a world saving quest, hearing your Digimon needs to go to the toilet, even though you just passed a toilet 2 minutes ago, just kills the mood and wastes time.

While the Digimon raising aspect is the most unique part of Next Order, it is something that goes on in the background of what is a rather normal game. The main part of the game has all the hallmarks of your typical JRPG: You level up your character. You grind until staring at a blank TV screen seems like a more fun alternative. You complete a whole host of side quests until you feel like stabbing the next person who asks you to collect something. And finally, you explore a variety of interconnected large open areas, complete with invisible walls, strange-looking monsters and poorly detailed environments. It’s about as JRPG as you can get. 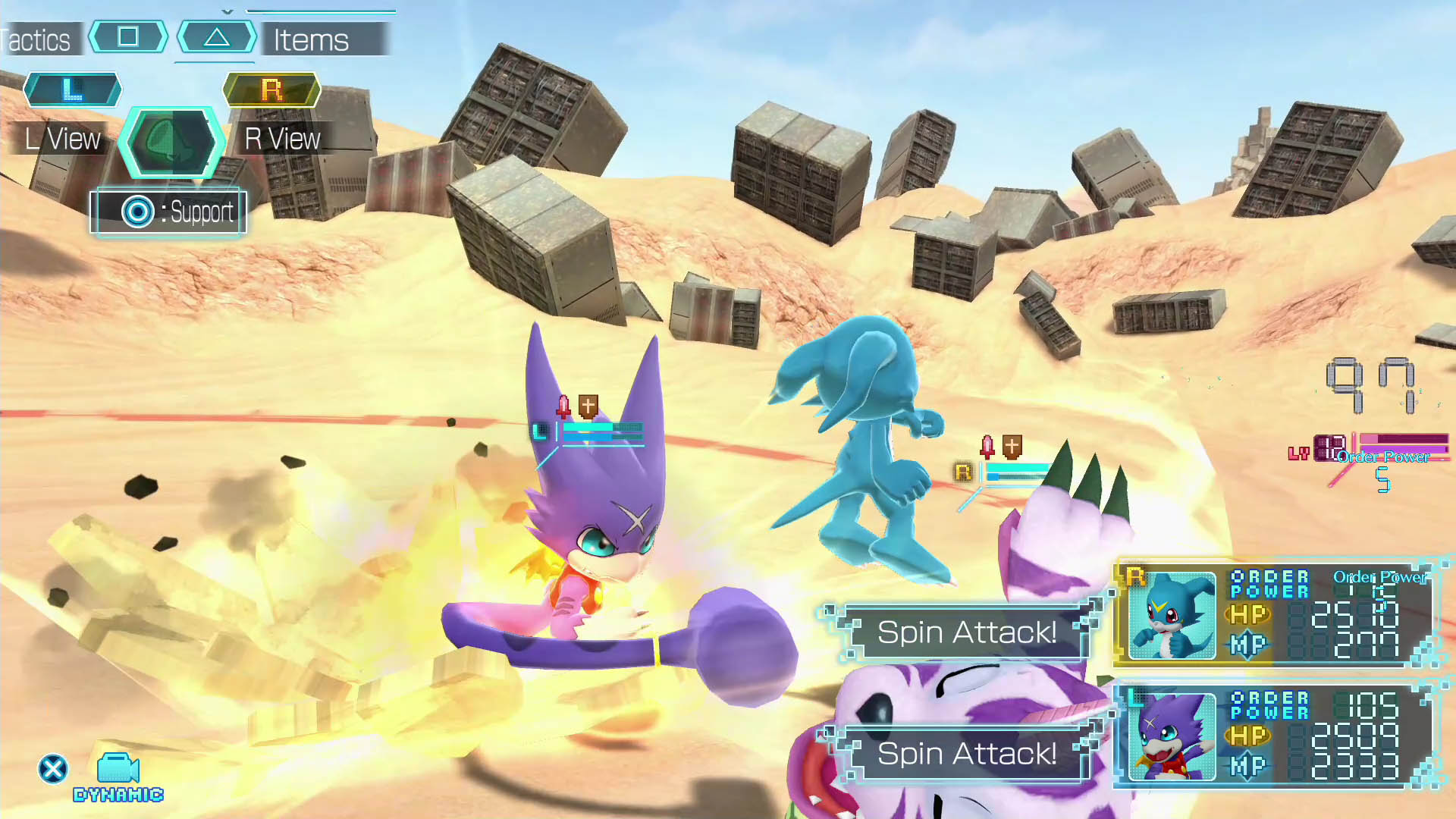 While a lot of JRPGs feature a bit of grinding, Next Order takes it to the next level. Going against the standard video game design, you only minutely increase in power by battling other monsters. Instead you must train up in a gym which admittedly fits in well with the raising and caring for a Digimon component.

Unfortunately though, training in a gym is both painfully slow and sleep-inducingly dull. It basically involves navigating a menu, doing a boring mini-game and wasting a lot of time. To properly train your Digimon up so they can face what is out there, you will have to spend a large portion of your game time in the gym.

Once you’re all trained up and ready to face the world, you have to be quick as your Digimon only have a finite lifespan. Once they die and become reborn, it’s back to the gym again to restart the whole process.

The inability to significantly increase in strength as a result of battling has an unfortunate consequence; difficulty spikes. As you don’t naturally increase in strength to a noticeable margin, every time the enemy levels up, which is anytime you enter a new area, you will find yourself severely outmatched.Your only option? Back to the boring old gym for a few more days of training. 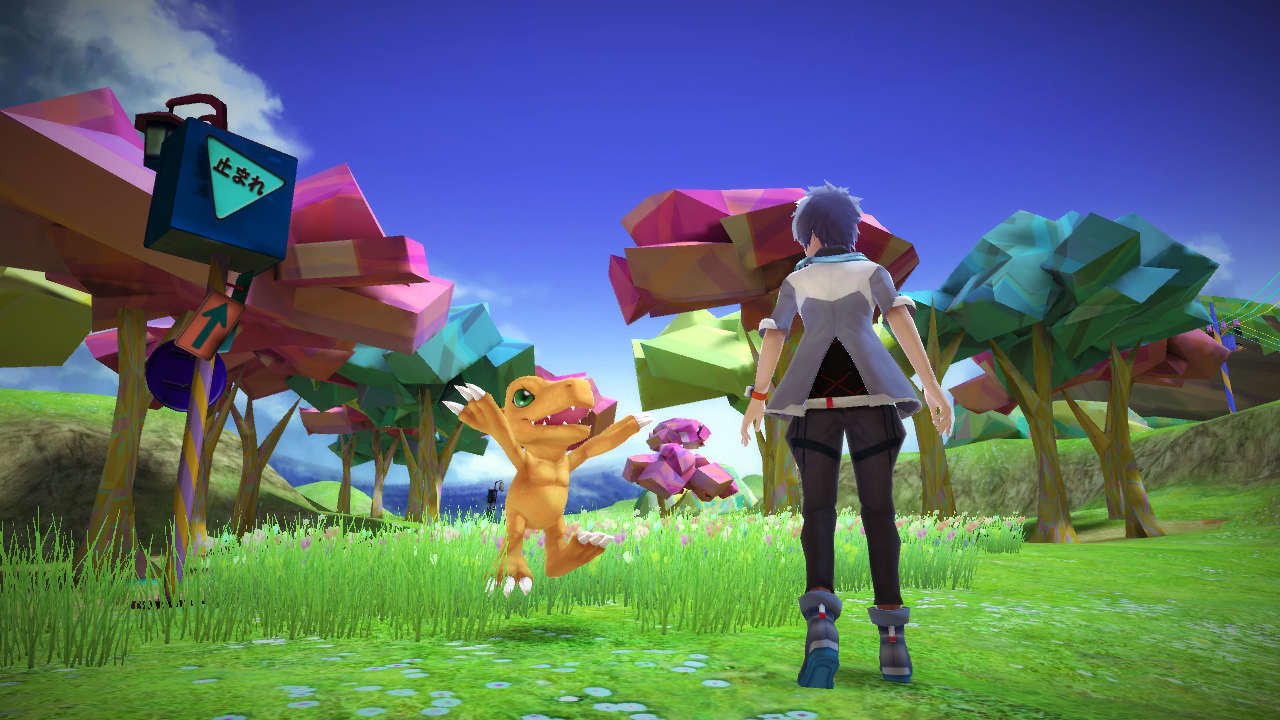 Most battles don’t last long enough to make this whole encouragement thing worthwhile so you will mostly have to rely on your Digimon. This process put me in the mind of a parent watching their 5 year old undertake their first soccer game. I’m not sure if you are supposed to feel proud but all I felt was embarrassment and frustration as my Digimon wanders around the battlefield, spending more time staring at their opponent than doing something.

While I certainly have nostalgia for both Digimon and those portable Digimon devices, I just couldn’t get into Digimon World: Next Order. This is mainly due to the horrendously tedious leveling up system which just takes time. While not as game-breaking, the out-of-place caring for your Digimon aspects and the hands-off battle system also severely let down what could have otherwise been an enjoyable game.