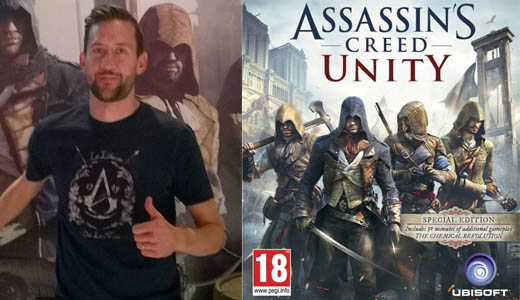 At the recent EB Expo 2014 in Sydney, Ubisoft were showing off a live theatre demo of the upcoming Assassin’s Creed Unity which is scheduled for 13th of November, 2014. 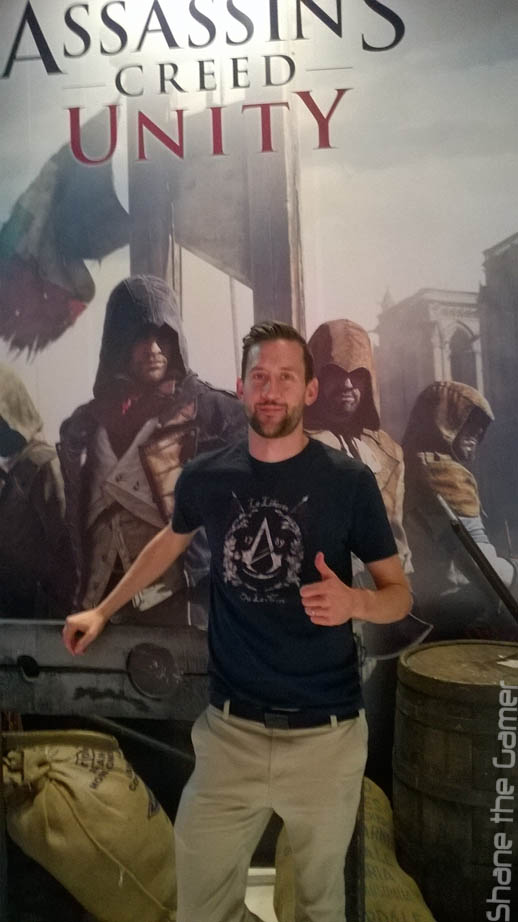 Darren: Hello Jeffery, thanks for taking the time to chat with me.

Darren: Now, I’ve got to ask, what’s it with the French bad guys having English accents? I’m originally from the UK, what’s the problems here?

Jeffery: Well, that has been widely discussed and it’s something that has been addressed directly by our creative director online. So I’ll leave it to him. I don’t want to try and put any words in his mouth. It was a decision made by the team and he describes it, I think, the only way it can be described. So I’ll let you read up on that one.* 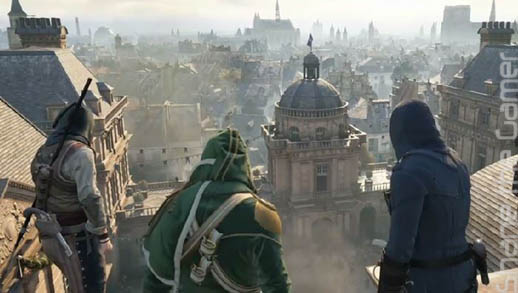 Darren: Ok, I’ll do that. I have an idea. But I just wanted your take on it.

Jeffery: I’m sorry about that, I’m not the right guy. My calls don’t go that high. I’m well versed in the game overall, but those decisions are someone else’s and not mine to comment on.

Darren: No worries, fair enough. Now, Assassin’s Creed IV was pretty vast, it had an epic feel, we travelled across the ocean to many locations, but this time we are constrained to Paris- as I understand it. What have you done to avoid Unity being a step back for gamers, to preserve that…? 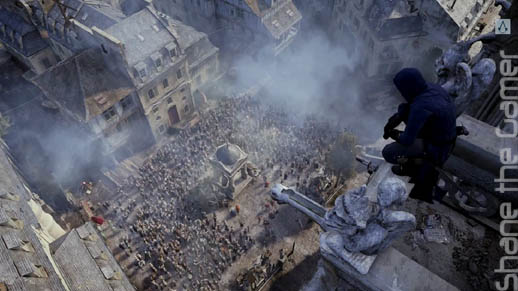 Jeffery: It’s the biggest land mass we’ve ever had in Assassin’s Creed, so while Black Flag was an enormous game, a lot of it was in the naval component so it was pretty limited as to what you could do. What we’ve done here is create the entire city of Paris with the within the boundaries of the pre-Housemen medieval walls. So in the 1850s they really tried to revamp Paris into modernity.

We are working within the medieval boundaries of Paris, which is a large city to begin with. We’ve got seven districts within that that provide different architectural, crowd atmospheric and even musical variations to provide variety within it.

Darren: And you can go inside a lot of the buildings this time, right?

Jeffery: Yes. You can enter every one in five or six buildings without any loading. This really adds to the depth and what we are able to do within the game world in terms of narrative and game opportunities. But on top of that, it’s an enormous city.

We are able to go from street level to rooftop to building interior, to underground. We’ve got thirty-eight major landmarks, all of which are near one-to-one replicas of the real-life landmarks and all have unique interiors.

In addition to all the Paris that I’ve just mentioned, fully accessible to players without any loading, we also have Versailles Palace and Versailles gardens to add a different feel. So you can go from the poshest of poshest, with marble and gold trim everywhere, to the hovels and down in the sewers.

There’s so much variety and so much opportunity in the game word. It would take endless hours to truly exhaust all the gameplay opportunities and just to see the visuals. The visual benchmarks that we have been able to reach throughout the city are just incredible. 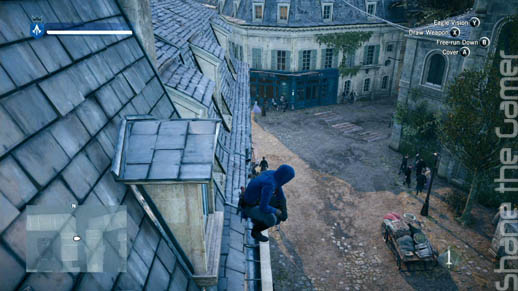 Darren: About that, the game world seems to have an incredible sense of scale. I’ve seen some screenshots showing this tiny assassin, surrounded by a huge vista. I suppose the draw-distance has been improved from last time to better show off your city. Is that right?

Jeffery: Yeah we worked on a lot of tech to make sure that we were able to keep the highest amount detail possible, especially for long distances. It was a key component to making sure that the city felt real, living and breathing and truly accessible to the player.

Darren: You are reinventing the franchise somewhat with this grander scale. This isn’t Assassin’s Creed V, is it? From what I’ve seen it’s almost like a new beginning. What can you say about that?

Jeffery: Well what we are trying to do is have the name representative of the narrative and the feel of the game. We felt that that was more suited to the direction we are going, you know. If you sequence numerically it feels like there needs to be some sort of progression.

What we are doing now with the next generation of consoles is revisit the core tenets of the original Assassin’s: combat, stealth and navigation. Doing that in a naval battle, which people would presumably expect, is kind of hard. We wanted to move away from that sequential progression and really focus on what we think provides the most narrative and exciting gameplay. 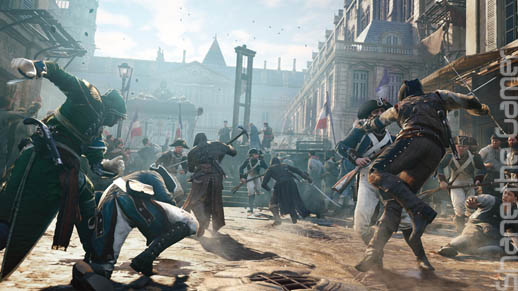 Darren: It’s not just the buildings that seem to have been scaled up. In the EB Expo theatre demo I was pretty blown away by the amount of people in the scenes. How many characters can you see on the screen at any one time?

Jeffery: We get up into the thousands. There’s a lot of historical events in Paris. It was the people’s revolution. There were definitely times when all of Paris was out, protesting the status quo. You can’t reproduce the claustrophobic and the anarchistic feel of a revolting city if you don’t have the people on the streets to represent it.

Not only do we have such ground-breaking tech that’s allowed us to bring the city to life like that, but the AI is no longer player-centric, it reacts to elements within the game world; like you, Arno, as an assassin, and up to three of your friends. There are so many elements in play affecting how the crowd reacts. For every action there’s a reaction. That is without a doubt. And its scales incredibly well, it really adds to the feel of a living and breathing city. 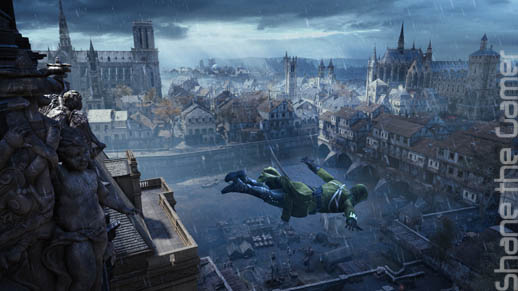 Darren: I’ve started to see this across the board. We are heading more towards simulation in games rather than everything being scripted.

Jeffery: And that’s what allows us to do the black box missions, where you can use the environment as a tool in your mission. Linier game design and scripting is really going away and now it’s simply an objective with us providing the player with the tools to take their own approach.

Darren: Last question, now. What do you think is the coolest part of the game?

Jeffery: Well, the advancements that we have made in integrating vast animations have made combat and parkour an awesome aspect of the game. But one of my major focuses has been on characters and the progress that we have made in facial animation and cinematics. This really helps you get involved with the characters and get to know them on a more human level. It really sucks you more into the narrative and gets you more immersed in the game. For me that’s it. As you saw in our EB Expo demo here, when we assassinate Silvert you can see how the years have aged him as a man. His beard, his eczema, all of it really brings the characters to life at the level that we were never able to do before. 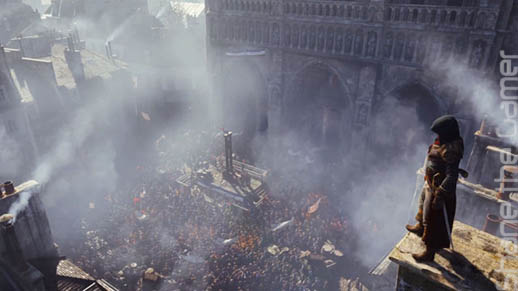 Darren: Wow, that’s awesome. Thanks for taking the time out to chat, Jeffery. I can’t wait to play the game.

*On the subject of the English accents in Assassin’s Creed Unity, Frenchmen during the French Revolution didn’t really speak with BBC-style Received Pronunciation. The game’s Creative Director Alex Amancio has, indeed, responded to the question of the game’s seemingly out of place accents. And it’s rather logical.

Apparently, what’s happening is that the Animus is translating the actual French language to English, with the English accent being the default. Alex Amancio goes further and explains that the team thought, creatively, that the English accent has a better period sound to it than that of, say, an American accent. 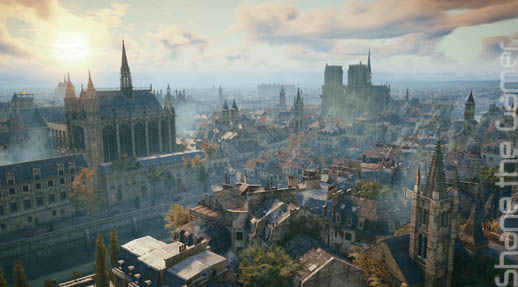 Whilst I can accept this to a point, I’m wondering if it there’s more to it. If Ubisoft were to have characters speaking in a French accent, they would need to either have French actors speaking English, which may not allow them to give their best performance, or have English speakers putting on a French accent.

Neither would be ideal, especially as English speakers putting on a French accent are almost impossible to take seriously. True Francophiles, however, can play the game with French voice acting and English Subtitles. 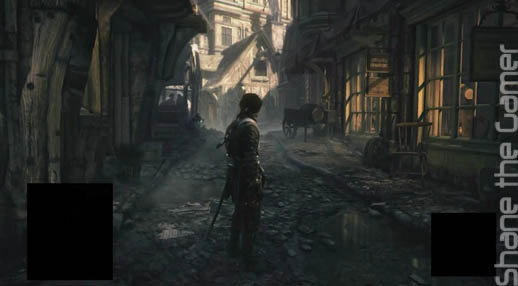 I’d like to thank Ubisoft Australia for arranging this exclusive interview opportunity at the EB Expo, Sydney.

Assassin’s Creed Unity looks amazing and is releasing for PlayStation 4, Xbox One and Windows PC.